A convertible with its top down came to a sudden stop on Wilson Street on a recent sunny morning.

The driver peered over a row of wilting grapevines at the 2-acre field just north of a Family Dollar store on Broadway.

“Is that broccoli?” the driver yelled, asking about the curls of hardy green leaves sprouting from the soil, easily 3 feet high.

That gorgeous kale was a decade in the making.

Ten years ago, Janice and Mark Stevens tried to buy this field, comprised at the time of 27 vacant, connected lots. They hoped to buy the land from the city and pursue their dream of starting an urban farm in the middle of Buffalo’s East Side.

The city balked, so instead they agreed on a lease and began the Wilson Street Urban Farm. But without owning the land, they worried the land could be sold.

“It was always in the back of our minds,” Mark Stevens said.

The Stevenses are finalizing a deal with the city to purchase the land.

“After 10 years of hard work, trying to create this space, it feels good,” said Mark Stevens, seated at a counter he built in their Fillmore Avenue house which backs up to the farm. “We want to stay here.”

“It’s kind of a relief,” Janice Stevens said. “You can expand your imagination, knowing it’s not going to be in vain.”

In 2007, Mark and Janice Stevens moved their family of nine from a farmhouse in eastern Wyoming County to a century-old house in Fillmore Avenue they bought at a city auction.

As devout Christians, they wanted to minister to people in the city.

“We believe that the best way to live our faith is to love other people,” Mark Stevens said in an interview with The Buffalo News in 2009.

The family believed in living simply, working with their hands and growing their own food. They found the big, empty field intriguing. It was across the narrow, alley-like street behind the garage of their Fillmore Avenue home.

Years earlier, the city had torn down the abandoned houses that once lined streets in the hopes that someone might eventually want to build there.

Instead, it became a dumping ground. 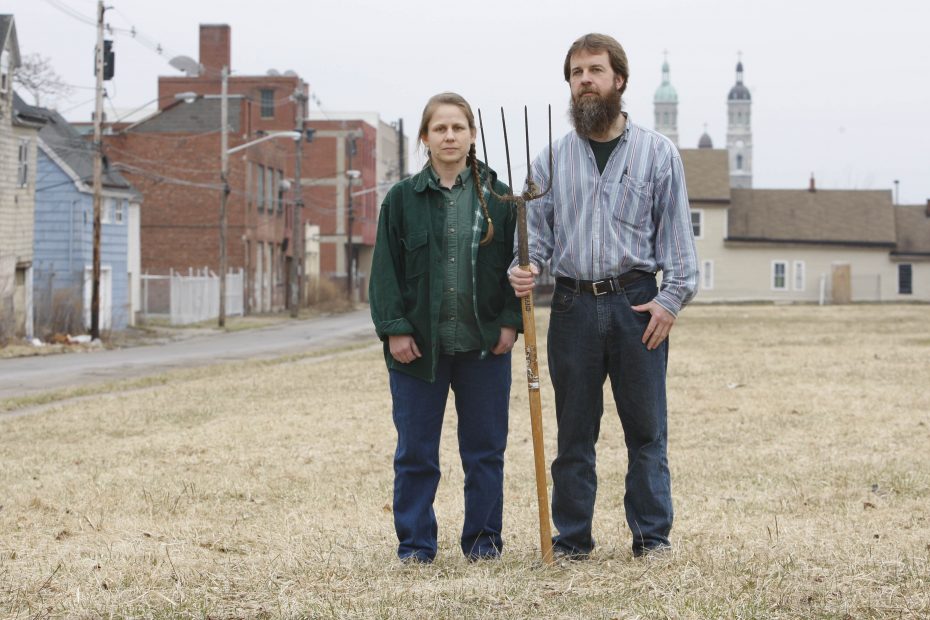 Mark and Janice Stevens pictured in 2009 on the barren Wilson Street land they wanted to turn into a farm. (Derek Gee/News file photo)

They offered to buy the land from the city, but officials rejected the offer. City officials wanted to be able to offer the land for possible development. Buffalo's codes also at the time also prohibited growing produce to be sold, which the Stevens family hoped to do.

The Stevenses couldn’t understand why the city wouldn’t want a farm in the middle of a neighborhood pockmarked with vacant lots and abandoned houses.

After months of back and forth, several articles in The Buffalo News and support from Fillmore District Common Councilmember David Franczyk and the community, the Stevenses worked out a lease with the city for a $1 a year. They also arranged for liability insurance of up to a $1 million through the nonprofit Grassroots Gardens. They also got the go ahead to sell their produce.

It wasn’t an ideal situation for the Stevenses, but they forged ahead with their farm.

The Stevenses and their children cleared piles of debris and dug up chunks of foundations from the demolished houses. They put in raised garden beds filled with good soil. They erected two big hoop houses and now a small one, too, to stretch the growing season. They installed an irrigation system with large rain barrels to collect rainwater.

Soon, they were growing tomatoes, peppers, carrots, asparagus, berries, herbs and flowers as their farm became part of a growing trend of urban farms across the city. The Massachusetts Avenue Project had introduced urban farming to the city’s West Side years earlier, but the Wilson Street Urban Farm became one of the first on the East Side.

As the Stevenses cultivated more and more of the 2 acres off Wilson, they started selling the vegetables and fruits at a farm stand right on the farm and also through CSA shares, which stands for community supported agriculture. Customers pay upfront for a season’s worth of produce and come pick up a share once a week. In the meantime, they provided yearly updates to the city about the farm's progress.

Along the way they also learned that the land was useless for building. The bedrock is too shallow to put in basements, the Stevenses said.

Today, the Wilson Street Urban Farm is well-known throughout the city for their farm and their produce, one of about a dozen well-established urban farms in Buffalo. The Stevens family is now growing on almost all of the 2 acres and after years of tending to the soil, it’s now safe and fertile enough to plant straight into the ground. 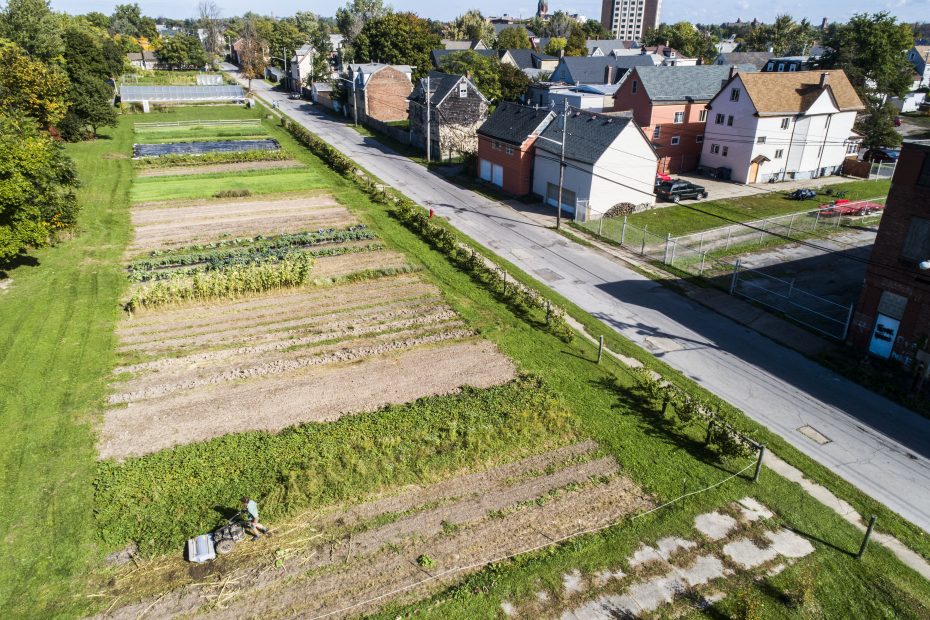 Neighbors come over to ask questions about growing vegetables. Some pluck grapes off the vines that line the edge of the farm. (That was the idea when Mark and Janice Stevens planted them.) Schools bring children for tours and it’s become popular stop on the annual Tour de Farms bike tour by GObike Buffalo and MAP’s Growing Green program for youth.

“Mark and Janice have really created an awesome model for anyone who wants to grow food for their families,” said MAP executive director Diane Picard. “When they started, they were mostly growing food for themselves. Now they provide food for the community there as well.

The Stevenses worked with the city as it developed its new zoning rules, called the Green Code, which laid out framework that now allows Buffalo residents to grow and sell their produce.

"They were at the forefront," said Brendan Mehaffy, executive director of the city's Office of Strategic Planning. "What really distinguished the Stevenses was that they were farmers. There are a lot of people who have ambitions but don't understand everything that actually goes into being a farmer and growing a crop and some of the challenges, like rodents and compost."

The farm is part of a collective of urban farms called the Farmer Pirates that sprang up on the East Side. Among the farmer pirates was a young man, Daniel Ash, who married one of the Stevenses daughter’s Alex, in 2012. They started a farm on Gittere Street but just recently sold it to a friend and moved out to rural southeastern Erie County. Another daughter, Kitura, got married earlier this summer and lives in a house near the urban farm.

The family has seen the neighborhood change around them. More immigrants are moving in, buying up and fixing old houses. Two grocery stores opened on Broadway. Jericho Road Community Health Center opened its third medical facility in the city a couple of blocks away.

It’s hasn’t all been perfect. Just a few days ago, someone took all of the cabbages along with some collard greens and kale. They also vandalized the small hoop house. 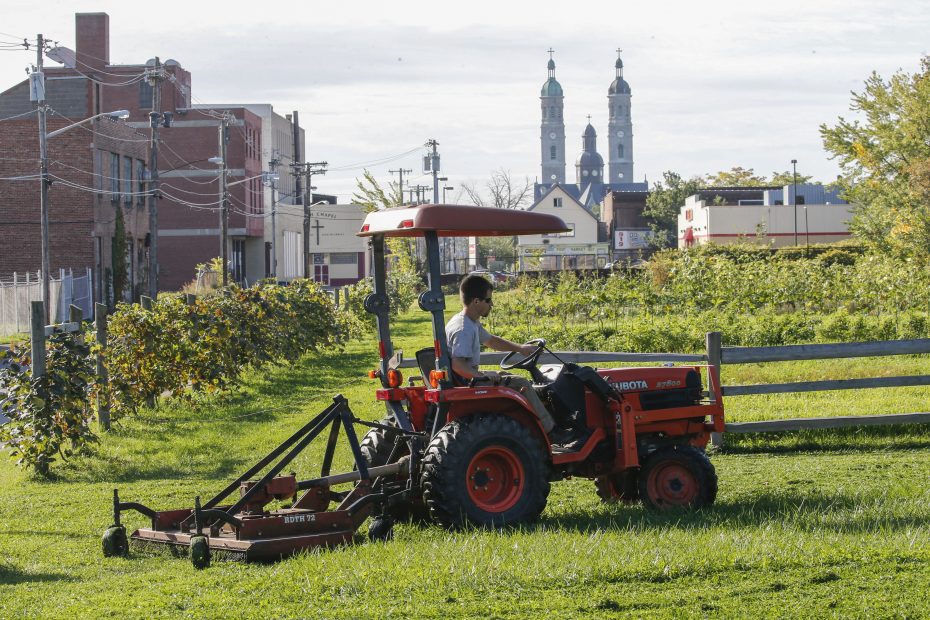 But far more often, the family has seen love and support from the community, like the driver who remarked on their kale.

“That's the majority of our interactions – the vast majority,” she said.

The Stevenses say they’ve enjoyed their role in the community’s growth.

“It’s the butterfly effect,” Mark Stevens said. “It’s a cool thing to think about it.”

And now they know they’re staying.

Councilmember Franczyk is glad City Hall came around to the idea of farming in the city.

“It’s what the city should be supporting,” Franczyk said. “I just love the idea that it’s growing right in the neighborhood. You can’t get fresher or healthier than that.”