The final two weeks of October are the most exciting in local college soccer. Teams have improved over the course of a season, ideally peaking at the right time to seal a playoff berth and make a run through the conference tournament.

Given the playoff setup of different conferences in different NCAA levels, the challenge of reaching the postseason varies considerably. In the University at Buffalo's conference, the Mid-American, eight teams advance to the tournament, while in Daemen's East Coast Conference in NCAA Division II, just four teams make the cut.

Here's the landscape with two weeks to go:

Notes: With a 2-0 win over St. Peter's last weekend - coupled with a few other conference results - the Niagara Purple Eagles have clinched a top-six finish and a playoff spot in the reformatted Metro Atlantic tourney, regardless of how they fare against Fairfield Saturday on Senior Day. Head coach Peter Veltri has led his side to four of the last five conference tournaments (although, in fairness, two were automatic bids to Disney).

Each in the forward trio of Annie Ibey, Kelsey Araujo and Hailey Bicknell has 10 points or more on the campaign, and the balanced scoring makes Niagara difficult to contain. Credit senior captains Amelia Gulley and Tuesday Jordan for their leadership, as well as the influence from experienced center backs Hadley Bucken and Breanne Guevara.

Sabrina Locas and Shania Van Nuland have split time in net, and both boast goals-against-average marks under 1.40. Read more about the Purple Eagles' battles through injury, a breakout star and Veltri's take on the program's progress.

Notes: Head coach Jim Hesch challenged his Spartans in the non-conference slate, playing five SUNYAC schools and one Empire 8 to prepare his team for softer AMCC competition. Even though D'Youville dropped their first six contests, morale remained upbeat, and Hesch's squad has since taken 16 of a possible 21 points in AMCC play.

Because seventh-place Pitt-Bradford has only one game left, the Panthers cannot pass the Spartans, which means DYC has clinched a postseason trip. The first two seeds earn a bye, while seeds Nos. 3 and 4 host the quarterfinal matches.

Tuesday's regular-season home finale clash against unblemished Penn State-Behrend will serve as a terrific tuneup for a deep Spartan squad, which has thrived behind Megan Dulniak's goalkeeping, the vocal leadership of Kaylee Heschke, staunch defending by Dominique Riforgiato and Annie Hayes, and timely scoring from Makenna Magee, junior Britt Cristofanelli and 16-year-old Jamilah McBryde, an Erie Community College transfer. Margret Leeds, a freshman from Wilson, is a budding star in the midfield.

Notes: Head coach Gary Boughton has created a community college dynasty in Orchard Park, as the Kats won all 15 regular-season games, with a 104-11 goal differential to boot. Springville alum Jena Schelble, in her first year on campus, led ECC in both goals and assists, with 24 and 26, respectively.

Notes: The Wildcats control their own destiny, but the path to the team's first conference tournament since joining NCAA Division II won't be easy. Standing in Daemen's way is LIU Post, a foe they've never conquered - nor scored more than one goal against - in five tries. The Wildcats square off with the Pioneers at noon Oct. 20 in Long Island.

Dan Dolan's side can also clinch a postseason berth should Mercy topple New York Institute of Technology, which will be played simultaneously Saturday. Williamsville South alum Jamie Boyar paces the conference in goals (18), points (39) and shots (89); the fleet-footed forward potted a whopping five goals in the team's 9-0 blanking of Lincoln.

Spanish sophomore Celia de Pablo Esteban has formed a lethal combination with Boyar, compiling 13 assists on the season from an attacking midfield role. Both players still have eligibility after this year, too, which ought to scare ECC back fours.

Notes: How resilient are these Bulls? With senior superstar Carissima Cutrona lost for the season due to a torn ACL on the last day of September, UB recovered from a short tailspin to claim two of their last three MAC matches, which all finished with the scoreline of 1-0.

After Gianna Yurchak's game-winning goal to beat Toledo in double overtime Thursday earned a vital three points, Shawn Burke's Bulls rumbled to fifth place, in the thick of a cluster of teams all vying for playoff berths and seeding.

All the work isn't done yet, though, as UB could find peril if they drop their final two games, against the first-place Falcons and barely-clinging-to-life Akron.

The back line has been crucial to the Bulls' recovery, as center backs Gurjeena Jandu and Tess Ford, flanked by Rebecca Bramble, Abbey Callaghan and Annie Judasz, have done well to limit the chances testing freshman goalkeeper Emily Kelly - just a nominal freshman at this point - while holding midfielder Hannah Callaghan's strength in keeping possession and switching the point of attack has relieved pressure, too.

Read more about UB women's soccer in our season primer, here, with a caveat that much has changed since its publication.

Notes: As the conference website reports, five programs are still alive for eight remaining playoff spots in the SUNYAC, with only dominant Geneseo having clinched so far.

The Blue Devils enter their final back-to-back of the season on a slide, failing to win their last four SUNYAC contests, one of which was a Battle by the Lake loss to Buffalo State. Fredonia will have to dig deep to carve out results at two programs ahead of them in the table.

Notes: Two one-goal losses last weekend at home - against Oswego and Cortland - have Buffalo State in trouble. Although the Bengals have a game in-hand over Oneonta, tied with BSC for the last playoff spot, the Red Dragons have only bottom-feeder New Paltz ahead on the schedule.

Nick DeMarsh's team will likely need to win at least one of the remaining two games on the docket, but a bright spot is the Bengals own the head-to-head tiebreaker over Oneonta.

Freshman Allie Reeds (three goals, eight assists) has been a revelation for the Bengals, creating scoring chances with regularity from her spot on the right wing. Classmate Alexis Hanson oozes athleticism and a big potential for goal-scoring, but she's still figuring out the necessary work rate and first touch to be a consistent contributor.

The midfield of Kyndal Hetzel, Emma Boccolucci and Catelynn Ruggiero offers a nice blend of toughness, power and composure on the ball, but Emma Krenzer - not recruited as a goalkeeper - has been forced to fill in between the pipes for injured Taylor Carillo. 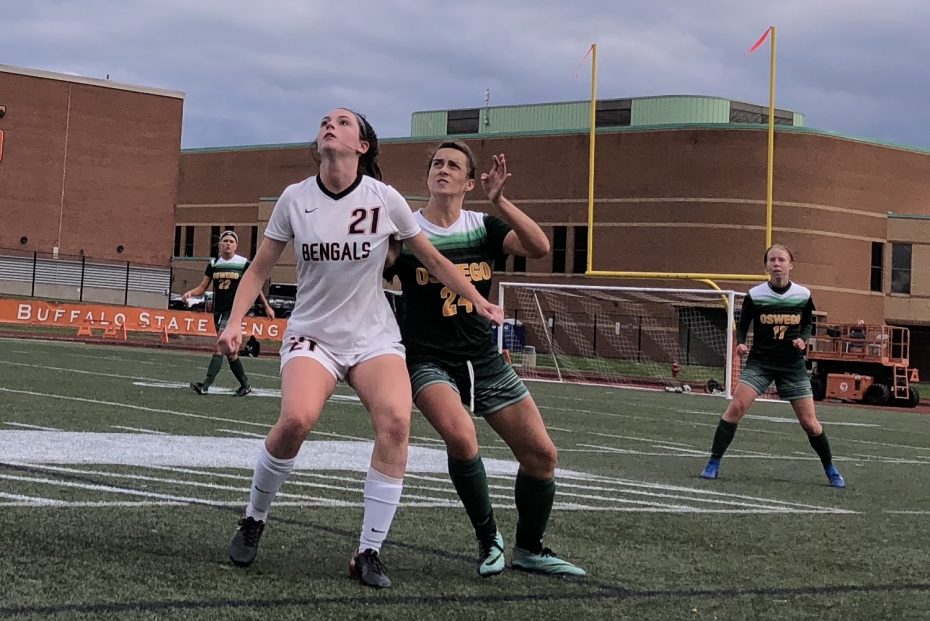 Notes: By our math, Canisius has not been mathematically eliminated, but Todd Clark's squad needs six points from its last two games - against two foes with winning records - and also receive help from other MAAC results. If the Griffs win both and Quinnipiac, the present No. 6 seed, loses to Marist and draws Manhattan, then Canisius would go to a complicated tiebreaker that's still in flux.

The Griffs have been in solid form, tying two sides above them in the table - 2-2 in the Battle of the Bridge against Niagara, then 1-1 against QU - but conceding in the 75th against the latter could prove costly in the long run. Then again, Canisius has been out-shot in those two games, 56-14, so if it wasn't for Alana Rossi's 22 saves, the Griffs would be eliminated.

The playoffs are a tall task, for sure, but not impossible. A trip to the postseason would be a terrific capstone for seniors Melanie Linsmair and Emily Czechowski, two local products who lead the team on and off the pitch. Read more about the Griffs' team culture cultivated by this senior duo.

Notes: Although the Bonnies are no longer in playoff contention, Steve Brdarski's squad is on a late-season Atlantic 10 surge, winning two of its last three - including an overtime victory over Duquesne on Thursday off freshman Emily Foltz's game-winning jaunt by multiple defenders.

The season-ending road clash against St. Joseph's will be a quality litmus test to learn how far St. Bonaventure has come since starting the season with 16 win-less games.

Junior goalkeeper Lauren Malcolm has tied her career high with 123 saves in a season - matching her freshman campaign - and has totaled 366 stops over three years.

Notes: It's been a trying year for Don Herlan in his first season at the helm. The Hawks have scored just one goal through 14 games yet conceded 65, losing the shots on goal battle 218-33. Hilbert's best chance for a win comes at 1 p.m. Oct. 23, as Medaille, also 0-7 in conference, heads to the Southtowns in the season finale.

Notes: In beating SUNY Cobleskill during the non-conference schedule, new Mavericks head coach Angela Tolsma-Nicholas ended a spell of losing that spanned three years; it was Medaille's first win since trumping Franciscan on Oct. 11, 2015, a span of 38 matches. AMCC play hasn't treated Medaille well, however, as the Mavs are still goal-less and win-less in conference play.