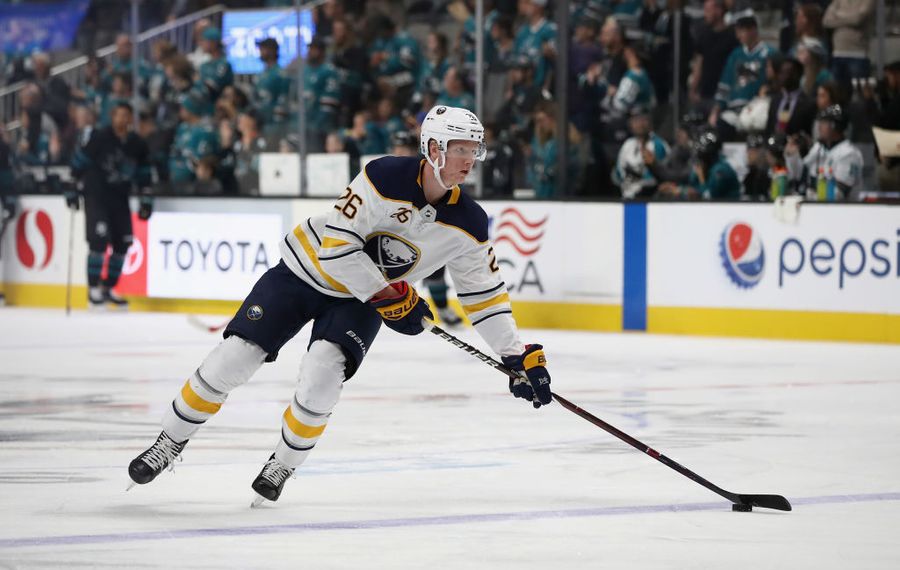 EL SEGUNDO, Calif. — It's as if Phil Housley went to one of those frilly West Coast juiceries or health food stores, started tossing in the ingredients and pushed the button that said "High".

Because what the Sabres unveiled at practice here Friday was their coach putting his forward lines and power-play units through the blender.

It's not like Housley had any real choice. The Sabres (3-4) head into Saturday's matinee against the Los Angeles Kings in Staples Center with just 13 goals in their seven games. Their power play is a pathetic 1 for 21 in the last four outings and 1 for 14 on the road.

"We're trying to create a spark for sure," said veteran winger Jason Pominville, who joined Jack Eichel and Jeff Skinner on the top line and moved on to a power-play unit. "We haven't created or scored enough at 5-on-5 so you switch things around, try to find new combinations. It's going to happen and it's probably going to happen again throughout the year. Hopefully we can find chemistry quick and get going."

"Obviously we didn't get the results so we've got to make some decisions," Housley said. "We tried to put some new lines together today to see the chemistry and I thought we really had a good practice."

There was also big news on the power play, where it looks like Rasmus Dahlin will finally got his first chance on the top unit. He was manning the points with Mittelstadt while Eichel was up front between Skinner and Pominville.

Okposo and Rasmus Ristolainen, the point men on the struggling top unit, were dropped to the No. 2 group with Sheary, Reinhart and Rodrigues.

"It's going to be interesting," said Dahlin, who has a point in three of his last four games. "We have to step the power play up, do everything we can. You want to come into the zone, set up our game plan. We haven't really done that. Hopefully it's going to get better."

The Sabres talk about shot mentality ad nauseam but there's plenty of truth to it. They only had seven shots on goal during their five power plays in Thursday's 5-1 loss in San Jose. Not remotely enough.

"Having a shooting mentality creates offense," Pominville said. "You look fast, you're retrieving pucks, the other team is chasing them. It makes you look like a lot faster team and the puck movement is a lot better."

"It's a little bit of mindset and execution," Eichel said. "You want to keep things simple and find your game but you don't want to do anything differently. It's bound to come if you do the right things."

On defense, the seasonlong pairings were also broken up, at least for now. Jake McCabe played with Ristolainen while Marco Scandella moved down with Casey Nelson. Dahlin didn't have a defense partner, skating with extra forward Remi Elie because both Nathan Beaulieu and Zach Bogsosian sat out practice.

Beaulieu took a shot to the hand or midsection in the third period and is believed to be more banged up.

"It was a good practice," said Eichel, who has three goals and has scored in only two of the first seven games. "I thought we moved well, executed some good plays, scored some goals. The energy was upbeat and that was good."

Now we see if practice habits can translate to games and more pucks start going at — and in — the net.

"It's a tough battle," Dahlin admitted. "You just have to refocus, talk about what's going on. Things will get better."