Elmwood Village residents got another chance Thursday night to review the progress on the planned Elmwood Crossing project, as developers Nick Sinatra and William Paladino showed off the latest versions of their proposals to transform the former Women & Children's Hospital of Buffalo campus.

The developers — selected a year ago by Kaleida Health for the redevelopment project — unveiled the newest elements of their planned $100 million project during a program in Kleinhans Music Hall.

Those changes included more green space throughout the project site, proposed facade designs for the Variety Tower and Alfiero Building, revisions to the parking plans and a new entry and courtyard into the midst of the old hospital core.

Besides showing new concept designs and site plans by Kideney Architects, the developers provided details on how the buildings would be reused.

The goal was to engage a broader segment of the community than just the Project Advisory Committee the developers have been working with.

"We’re thrilled about the direction that this is going in," Sinatra said during an earlier interview. "It's going to be the coolest neighborhood in the city of Buffalo."

Sinatra & Co. Real Estate and Paladino's Ellicott Development Co. are undertaking the reuse of the 8-acre former hospital, converting the 600,000-square-foot complex into a residential, retail and commercial community.

The project will include more than 220 apartments, 27 condominiums, 22 townhouses, a 75-room hotel, an urban grocery, boutique shops, office space and an EduKids daycare.

Most of the hospital buildings — including the Variety and Tanner towers and Alfiero — would be reused, while two would be expanded. A 34,400-square-foot portion of the tower complex will be demolished to make room for a courtyard accessible from Hodge Avenue and Bryant Street.

“We will be redeveloping and further stabilizing a neighborhood for decades to come,” Paladino said.

Tanner, along with three buildings known as the Annex, MH and D buildings, will be renovated with historic tax credits.

But Variety and Alfiero will get new looks. All the buildings will be renamed.

"We think it’s a nice opportunity to introduce some contrast into the neighborhood," said Sinatra Director of Development Amy Nagy.

At least 50 people had attended Thursday’s two-hour open house at Kleinhans by 7:15 p.m.

The event featured artists’ renderings of the project. While few seemed to quibble with the varying architectural styles incorporated in the project, others expressed concern about the impact the increased density would have on the neighborhood’s infrastructure and whether the sewers could handle it.

“My main concern is the density. A lot more people will be living in the area,” said Laurie Dann of West Ferry Street. “If you don’t fix the infrastructure, you’re going to have a problem."

Dann added: “I like to see progress. I hate to see things sit there and decay.”

Guy Berberich, who lives at Hodge and Elmwood, said he did not mind the mixture of styles. “I don’t mind. It matches the vernacular of what already exists on the surrounding streets. It matches or it draws on what’s already there," Berberich said.

Patrick McNichol lives just outside the neighborhood on Connecticut Street.

“I like the infilling of some of the missing teeth in the urban fabric,” McNichol said. “I think it makes for a more enjoyable walking experience,” he added.

Under the newest plans, the developers increased the amount of green space and public space.

The developers incorporated an open-air courtyard and a glass-enclosed breezeway along the front of the main hospital buildings on Bryant Street. 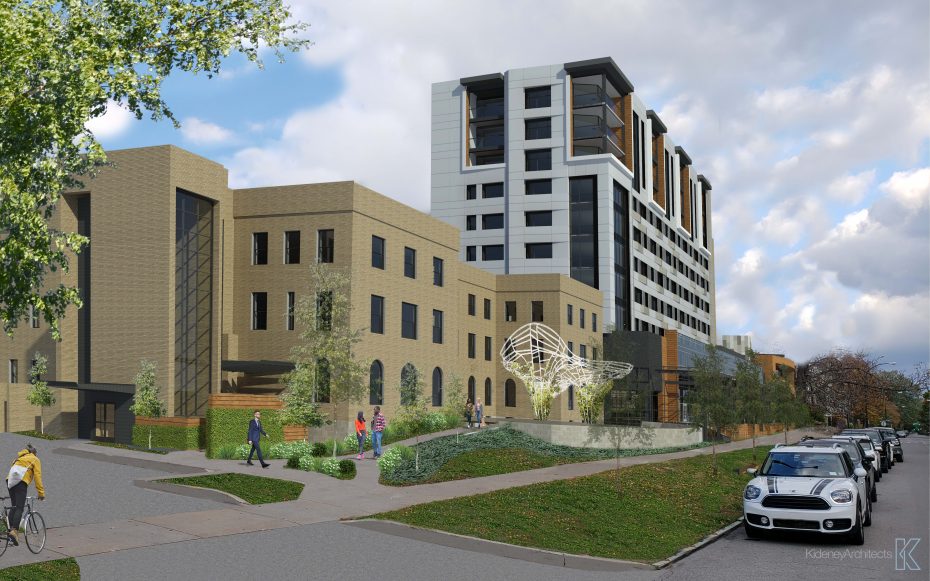 Part of the historic hospital complex in the Elmwood Village that will become Elmwood Crossing. The Variety Tower building is in the background. (Photo via Ellicott Development)

On West Utica, a parking lot has been moved to the rear of the planned grocery store.

A walkway will link the garage to the grocery building, which will have several other retail stores and 48 apartments on the upper three levels, at what's dubbed the West Utica Lofts.

Essex Homes will work with CJS Architects to construct the three-story townhomes on Utica, while EduKids will occupy a building on Hodge.

Nagy said officials have started planning the interiors of the town houses. Units can be customized, and she said prices will likely range from the high $600,000 to the upper $800,000 range.

At the 10-story Variety, condos with balconies will occupy the top three floors. Prices have not been set, but some units are expected to fetch $1 million.

The seventh floor will feature a health and wellness facility. That will be followed by four floors of hotel and meeting rooms, a floor of office space, and the ground floor with retail space and other functions. 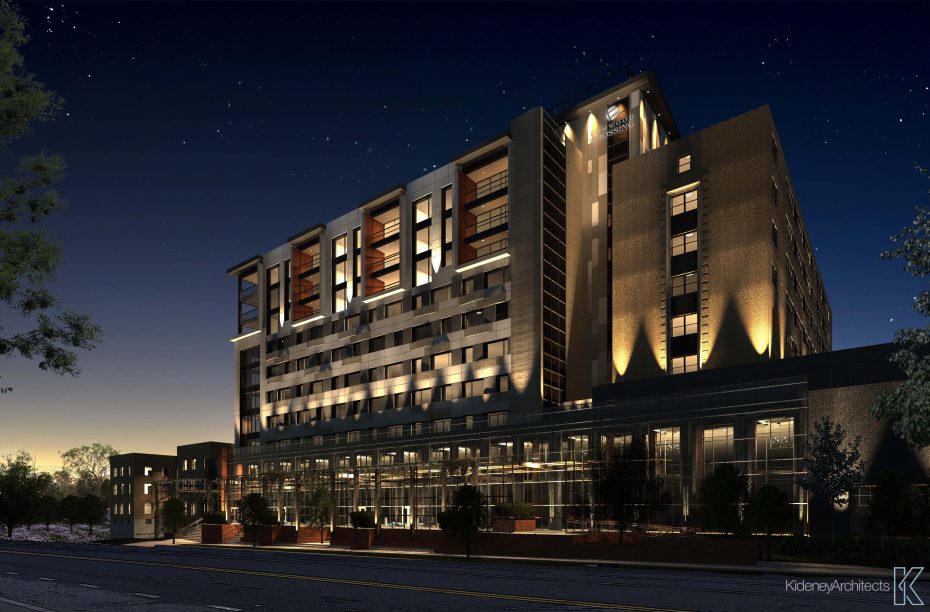 The Tanner building will have one floor of retail space on the ground level and 49 apartments on the next eight floors. Alfiero's three floors would all be offices.

Three historic buildings will have about 100 apartments, with 27 units in Building D, 37 in Building MH and 36 in the Annex.

The project is expected to take up to five years to complete, through 2022. The first component — a building that will be erected at Elmwood and Bryant — has been approved by the city.

The rest of the project is still subject to municipal review.

The companies are asking the Common Council to designate the project a planned unit development.

Both the environmental and zoning processes are expected to wrap up by early 2019. 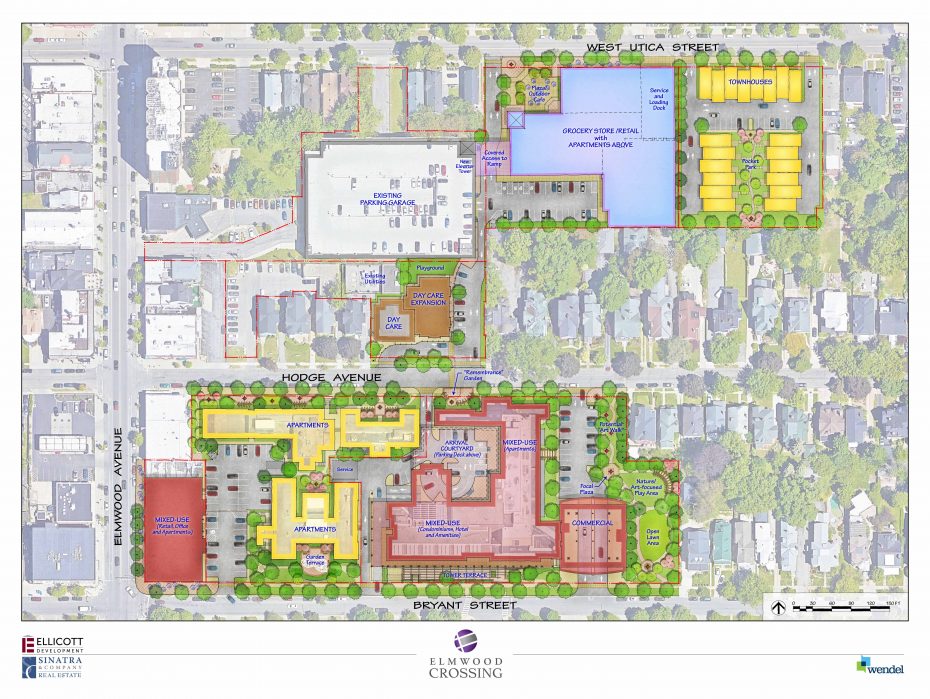 The master plan for Elmwood Crossing.