It takes a village not only to raise a child, but to employ an adult.

That’s one of the challenges facing the Buffalo Center for Arts and Technology, the bright, airy Main Street facility with a twofold mission: use the arts to keep kids in school, and train adults for good jobs in Buffalo’s growing health care industry.

Modeled on a Pittsburgh program that has expanded internationally, but tweaked to meet Buffalo’s needs, BCAT is winding up its nine-month medical coding and pharmacy technician programs that include both classroom instruction and unpaid internships in hospitals, medical offices, pharmacies and billing sites.

But the program is still trying to find internships for three of its students. Jason Clark is one of them.

Clark worked in loan processing, collections and payroll processing while also running his own tax business. After being let go by his last employer, he saw a BCAT brochure in the unemployment office and, after researching the program, was able to enroll in January two days after the deadline when some other applicants dropped out. 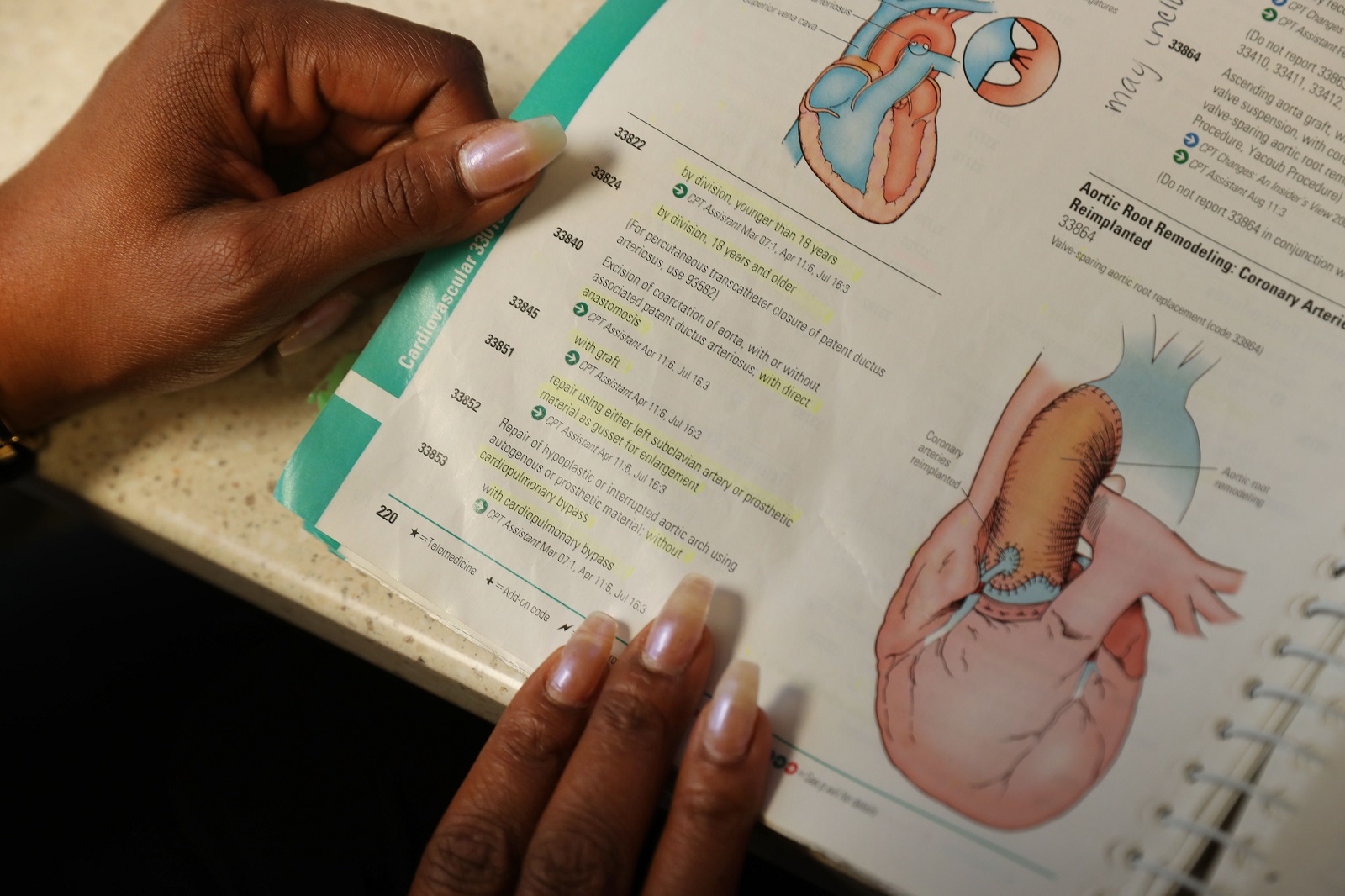 Now he’s one of those waiting to be placed in an internship while preparing for his medical coding certification exam next month. Medical coders translate a doctor’s receipt so that insurance companies know what the ailment is and how to pay for it. It’s a rigorous course that requires a lot of knowledge, including of anatomy because a doctor is not going to write "hip bone," he’s going to write "ilium."

"That’s the stuff we need to know... You have to do a lot of reading," said Clark, a father who shares custody of his 9-year-old son. "Coding is challenging. If people say it’s easy, they’re lying. Seriously."

While waiting to be placed in a work site, he still comes to BCAT to study for the 150-question, five-hour certification test.

"That’s why internships are so very important to us," says Deborah A. Porter, director of BCAT’s adult workforce programs. "That knowledge helps them when they sit down to take their certification exam because they’re exposed to it from a practical standpoint."

Drumming up that kind of support, financial and otherwise, is why Bill Strickland– founder of the Manchester Bidwell Corp. on which BCAT and 11 other centers are modeled – was at a Buffalo Club breakfast this week urging community leaders to step up. He reminded the 130 bigwigs that it costs $40,000 a year for his home state of Pennsylvania to lock someone up, most of whom, like him, are African-American

"That is not a prudent investment," he said, contrasting that with investing in BCAT and a chance to give someone "a real life."

That is what BCAT is offering Latesa Woods, who went through the classroom training and is now interning at Buffalo General Medical Center.

The single mother of two enrolled in BCAT after her last job was eliminated in an acquisition. When a personal tragedy caused her to miss three days, she heard a knock on her door. It was Porter.

"I couldn’t believe that she cared that much," said Woods, who recently passed her medical coding certification exam. Not only did BCAT staff help her, they also gave interview tips to her significant other that helped him land a job at the Tesla solar power plant on South Park Avenue.

BCAT combines that kind of commitment to its students with a tough love that holds them accountable while also recognizing the challenges many of them face. Porter – who can relate to her students because she’s faced similar challenges herself – recalls seeing a young woman just rocking in her seat in class. Then she found out why: The woman, at age 5, saw her mother attempt suicide before dying from opioids 10 years later; had a cousin stabbed; and had her brother fall over on her when he was shot to death.

All of that trauma had finally taken its toll.

Porter got the young woman into a mental health program and she is now back on track.

But while the impact of violence and other trauma on kids is finally being recognized, much less attention is focused on the impact it can have on adults. BCAT doesn’t make that mistake. It will bring in trauma experts, parenting experts or anyone else that can help students meet the challenges – including child care and transportation – that poverty and urban living can throw at them.

That includes starting a three- to four-month tutoring program for adults who can’t pass the 10th-grade math and literacy tests needed to get straight into the coding or pharmacy tech classes.

The result is a program that boasts an 88 percent job placement rate for its adults and a 98 percent graduation rate for its young people, who must attend school in order to participate in the after-school art, music, digital media and other classes it offers in fully equipped studios. Six months after graduation, 82 percent to 92 percent of its medical coders are still employed, while 71 percent to 92 percent of its pharmacy techs are still working, Porter said.

And everything – from classroom materials to the cost of the certification exam – is free to students. All they have to do is put in the work. Launched in 2012 with funding from the O’Shei, M&T and First Niagara foundations, its $1.2 million budget is still funded mostly through foundations and grants, with the state Labor Department chipping in for the adult jobs programs.

Strickland said Buffalo’s program is "dialed in, big time" and called it one of the model’s top performers. But the fact that it could offer free labor – unpaid internships – and not have enough takers means the problem is not with the program or its students, 97 percent of whom are African-American, a group often stereotyped as not wanting to work.

BCAT graduates prove otherwise. All they need are internships and employment opportunities at the end of the rainbow.

If Buffalo – all of Buffalo – is really going to prosper, it’s time for the rest of the village to step up.