Mary McDonnell was scheduled to appear at SUNY Fredonia a few times in recent years.

But the award-winning stage, television and film actress had to cancel coming to her alma mater each time. She was just too in demand as an actress to complete the journey.

But nothing is going to stop her making it for the college’s homecoming weekend that starts Friday.

“Each time it was interrupted by my work schedule, where I would suddenly get a job,” McDonnell said in a telephone interview earlier this week.

“I am so excited to come back, having not been back for so long,” added McDonnell, who lives in Southern California with her actor husband of 34 years, Randle Mell. “I heard it might snow. That would be fun, too.”

McDonnell, who gave the 1999 commencement address at Fredonia, will be busy.

The big event is “An Afternoon with Mary McDonnell” on Saturday at the Robert W. Marvel Theater, where she will discuss her career on Broadway, in film and in television.

Undoubtedly, it will be a long discussion. Her credits are too numerous to mention. They include Oscar nominations for her portrayal of Stands With a Fist in the 1991 Oscar-winning film, "Dances with Wolves," and for playing a paraplegic soap opera star in the 1992 movie "Passion Fish."

On television, she earned a Peabody Award as Laura Roslin, the president of the universe in the Syfy network series "Battlestar Galactica."

She earned her second Emmy nomination as Capt. Sharon Raydor on the TNT series “The Closer,” which led to her starring in the spin-off "Major Crimes" in the same role. Her first Emmy nomination was for a recurring role on “ER.”

She began her career in the theater, receiving an Obie Award for her performance in Emily Mann's “Still Life" and playing the title role in Wendy Wasserstein's Pulitzer Prize-winning "The Heidi Chronicles" and Mann's "Execution of Justice."

Returning to Fredonia to discuss her career was McDonnell’s way of giving back to the college she feels she owes so much.

She described a scene that could have been right out of a coming-of-age movie. 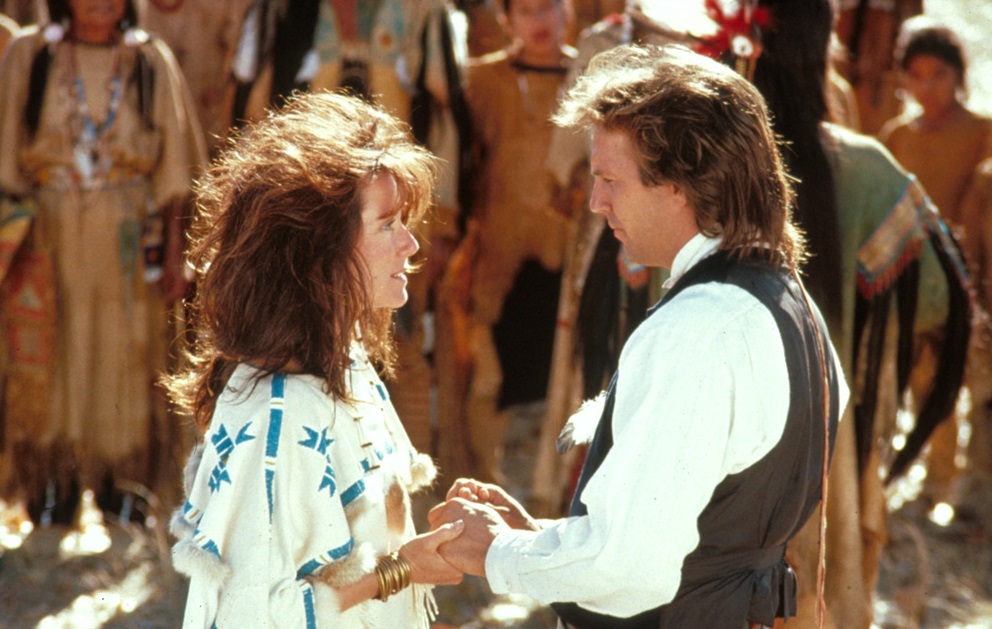 Mary McDonnell and Kevin Costner in "Dances With Wolves."

As a freshman in the '70s, she lived in an all-women dorm. On the second night, the women started playing games, including rolling toilet paper across the floor with their noses. McDonnell didn’t feel like playing, but didn’t have the guts to say, "This is stupid.”

She saw a woman with a leg in a cast across the room who didn’t want to play the game, either. McDonnell sat with her.

“She was a freshman and we were both sort of ‘this is the dumbest thing ever,’” McDonnell recalled.

The freshman, Marie Bichert, was a theater major who planned to be at homecoming this weekend.

“It was through my friendship with her that I started going over to the theater department,” McDonnell said.

“I’ve been an actress for 40 years and fortunately, through some kind of grace, I have worked really steadily in all areas – in theater, in film, in television. The only reason that ever happened is in Fredonia I took a class called Introduction to the Theater taught by the head of the department, Dr. Jack Cogdill.

“I took it as an elective out of curiosity,” she explained. “I found myself honestly thinking about the world a little differently through the lens of theater history.”

Her theater friends double-dared her to audition for a production of Arthur Miller’s “The Crucible.”

“That was the beginning,” McDonnell said. “I have never looked back. It is so amazing to think of about how blessed that moment was for me. It changed my life completely.”

As a senior, she was part of an exchange program that led her to Manchester University in England, performing with post-graduate students, including famed British actress Julie Walters (“Educating Rita”).

“There were so many profoundly gifted young British actors,” McDonnell said. “I had that opportunity to kind of really absorb the different levels of style and commitment and historical impulse towards theater that was in their DNA and it certainly is not in the American DNA. Fredonia afforded me that incredible opportunity as well, and that really changed my point of view as an actor. Because up into that moment, I was an ingenue at 19, 20. After that year, I was a character actor and that never changed for me from that point on. That was all Fredonia.”

McDonnell, who grew up in Ithaca, chose to attend Fredonia partially because it was an affordable state school and she was putting herself through college on loans.

“I visited Fredonia and I just kind of liked the feel of it and I had a sister at Buffalo State,” she said. “I didn’t want to go to Buffalo and be too close to her, but I figured if I was at Fredonia I would be close enough. … Fredonia just appealed to me. I can’t explain it.

“And lo and behold, it was the right decision, because I started acting there. There was quite a theater department and the building was brand new and the facilities were awesome. It was a great gift to me actually.”

McDonnell started her acting career when film actors were reluctant to work in television and rarely crossed over. That has dramatically changed.

“I lived through that change,” McDonnell said. “When I first entered, theater was the top of the heap, and if you were lucky and had a certain kind of talent you made movies … but you didn’t really reach out to television unless it reached out to you.

“I would have to say part of why I ended up doing as much television as I have done is because I very much like the way it supports my lifestyle as a mother,” the mother of two said. “For me, the idea of having a set schedule somewhat – you go into the studio and you are home at night.

“Now it has turned out that television has evolved as the place where the best writing is. Now it is the greatest place to go by far. Not only do you have a great schedule, you’ve great writers, directors. It really has evolved into kind of the gold standard.” 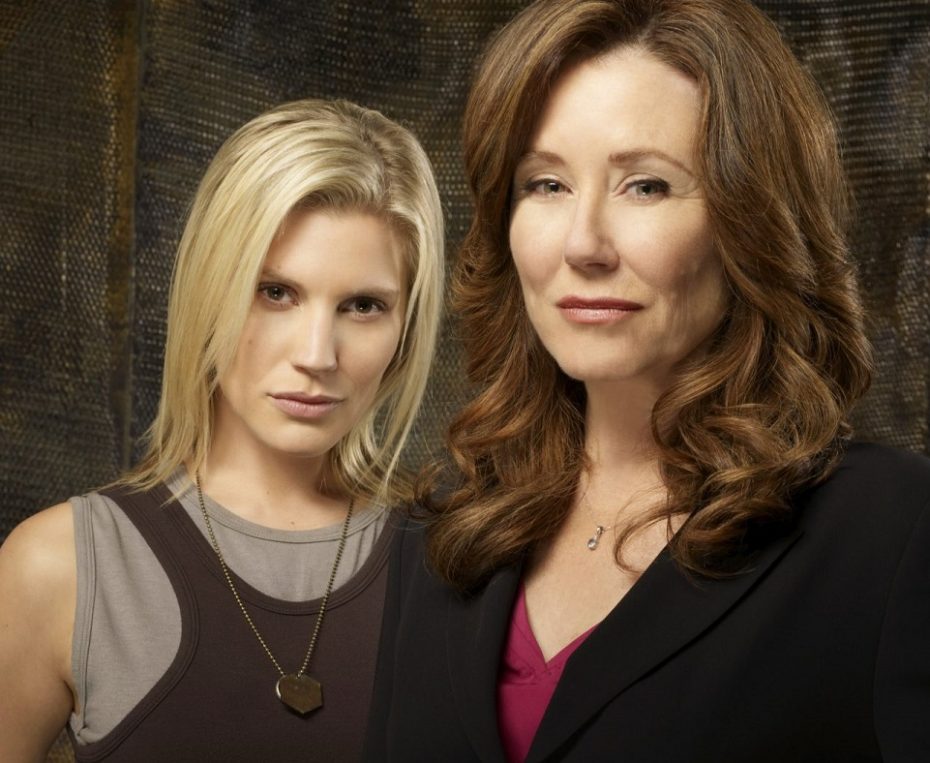 Another life-changing experience for McDonnell was acting in “Dances with Wolves.”

“I think it was gigantic, a paradigm shift,” she said. “I’m not sure without ‘Dances with Wolves’ that I would have had the last 35 years on the level that I had it. Because that was such a big deal, such an important film. It was seen by everyone all over the world and my character just struck a note with people, so they did not forget me, because Stands With a Fist was so accessible to people somehow. They relied on her, so that kind of changed (things) for me in major way.”

Her experience from 2004 to '09 in “Battlestar Galactica” as president of a universe of 55,000 people affected her in a major way, too.

“I learned more about power and being a woman in power and survival and the complexity of tough decisions,” she said. “My whole point of view on leadership expanded when I was playing that role. I am very grateful for that role.”

“Major Crimes,” which ran from 2012 through 2018, also was a boost for her career. She found out how loved her character was after there was a fan backlash over Raydor being killed several episodes before the series ended.

“The backlash was both understandable and surprising,” she said. “I think what happened over the course of that year is this character became ever more important to the culture than she had been even the year before and part of it had to do, honestly, frankly, with what was happening for women in our culture. That was the beginning of it when Hillary Clinton lost the election. So anybody out there playing one of these women at that time became phenomenally important. I certainly didn’t anticipate the reaction of the loss of her that was felt.”

She hasn’t found any new acting roles to embrace yet, but is developing two projects as a producer.

If history is a guide, she will be acting again soon.