It always raises my hopes to see a kitchen move that I’ve never witnessed in the wild. Unfortunately, in the food world, creativity is in greater supply than discernment. Just because you can dress a hot dog with chunks of Snickers bars and red hot cole slaw doesn’t mean you should.

So to see a menu as nonstandard as Prescott’s Provisions’ left me torn. I wanted to believe that charred avocado, king crab and furikake, the Japanese seasoning mixture that starts with dried seaweed, could play well together.

When the dish arrived, crowned with a bubbly black-and-white sailfin of squid ink cracker, it looked like something from the Mos Eisley Cantina. I braced for impact. But the sweet crab and rich avocado needed no introduction, and found support from the sea in both cracker and crunchy topping. It worked, as both an appetizer and as an introduction to the finest table in Tonawanda. 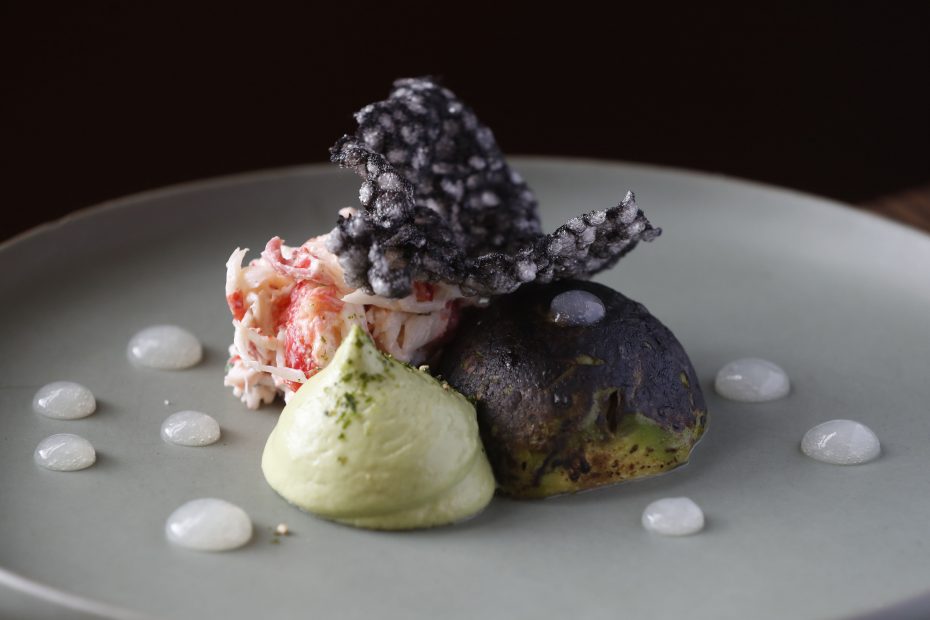 The restaurant, which opened in June, is built into a former garage on the City of Tonawanda side of the Erie Canal, across the water from Remington Tavern and Dockside Bar & Grill. Prescott’s Provisions has boat parking, and a parking lot that’s not big enough for the customers it can hold.

There’s a patio facing the canal that makes an apt perch for sunset watching. In clement weather, garage doors let in the breeze, along with, at times, the sort of insects encouraged by water.

Chef Vincent Thompson, formerly of Buffalo Chophouse and Chez Ami, is running the restaurant. He isn’t the first cook in town to toss cauliflower florets in seasoned flour and fry them into snackable bites ($9). The difference is in the dip, aioli alive with a husky pork punch from the spreadable Calabrian salami called ‘nduja. 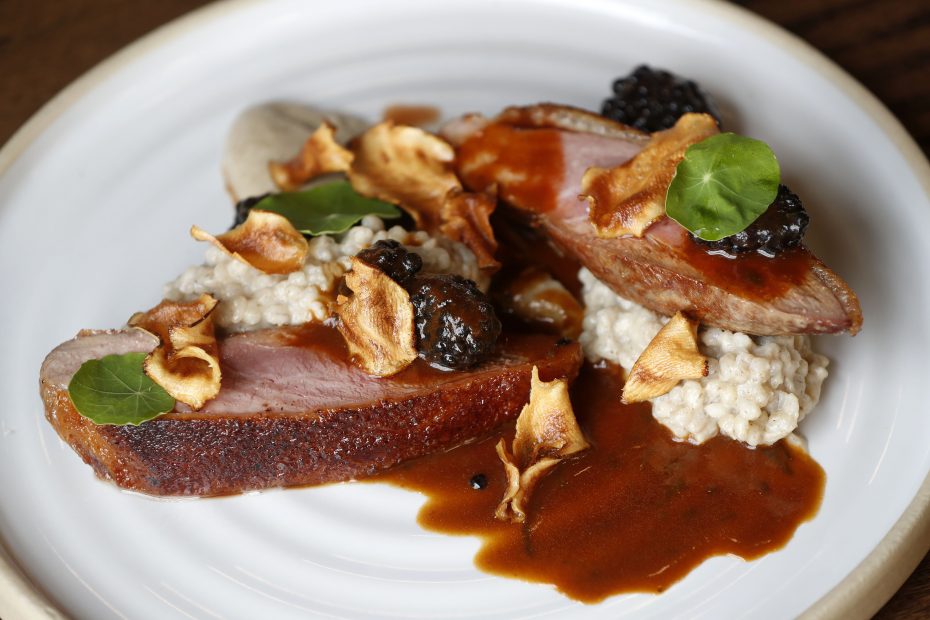 He’s not the first to smoke creamer potatoes over hay, either ($9). But the accompaniment of house-made pimento cheese is a welcome kink, the twining of smoke, cheddar and roasted chile drawing forks back for another bite. Brussels sprouts ($9) became addictive too, once chopped, fried to a deep bronze crisp and tossed with pickled mustard seed, walnuts and bacon.

Apple salad ($11) saw slices aligned along a swath of lebneh, tangy drained yogurt. Tufts of two-year-old proscuttio di parma, celery leaves and crunchy toasted hazelnuts extended its savory range, with a miso vinaigrette pulling it together with an umami lasso.

Value came to mind again when tucking into the steak, a 12-ounce USDA Prime Black Angus ($39) that arrived on the dot at medium rare, crusty and crowned with charred broccoli and oozily melting blue cheese butter on a bed of potatoes silky with butter. Maybe Thompson’s years at Buffalo Chophouse should have prepared me for the beautiful beef. 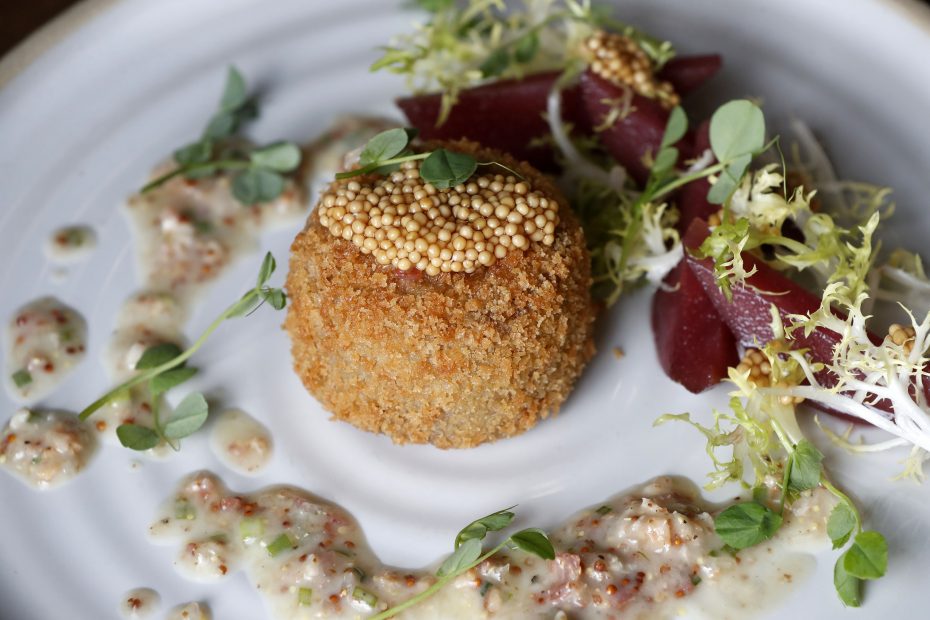 Prescott’s entrees didn’t lose momentum. House-aged duck breast ($29), its skin rendered to a toasty crisp, rivaled the steak in savory oomph. Plate partners included barley and stewed blackberries, which provided the sweet fruit tang usually accomplished by cherries. As it turned out, that was a berry good idea.

Pork shoulder and belly ($25), atop lentils studded with carrots and bacon offered a lush tour of the pig’s possibilities. A softball-sized chunk of pork was braised, seared and glazed until its tenderness could be tickled apart with a fork. The unsmoked bacon was crispier but practically as tender. Marbles of fresh apple, marinated in sweet-sour aji chile gastrique, offered pops of crunchy tang.

Another dish I would return for was the grilled monkfish ($25), which arrived atop earthy farro. Paper-thin fennel bulb added licorice, and heirloom tomatoes their acid.

In a departure from the generally well-seasoned meal, some dish components were painfully oversalted. My other main gripe was the noise. At times the impact-hammer din of diner conversation made it easy to remember that the echoey space was last an automobile repair shop. 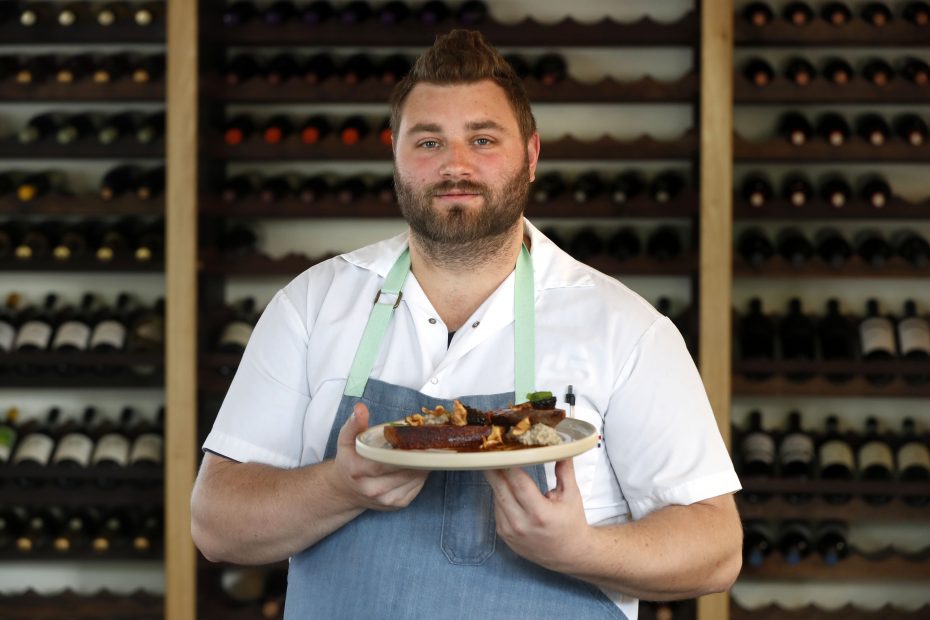 Our server was personable and detail-oriented, though quiet-spoken. Once asked to wipe the table, she was quick to oblige.

The way things have started out, Prescott’s Provisions is giving the City of Tonawanda a taste of fine dining it hasn’t had since Warren’s. There’s a new destination at the end of the Erie Canal. It’s not a lake, but it is pretty great.

Gluten-free options: most of menu, besides pizza. 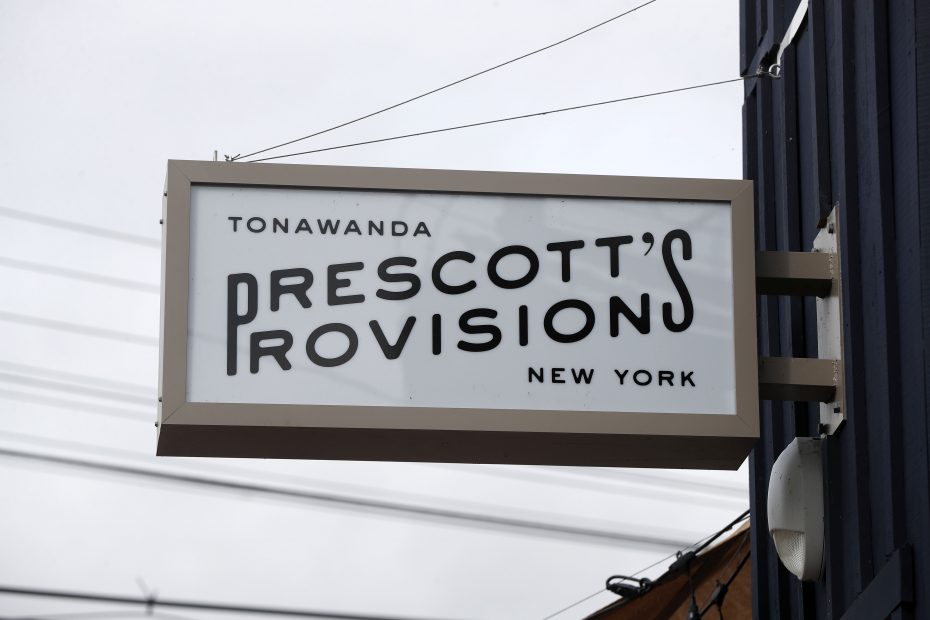 Prescott’s Provisions is located at 40 E. Niagara St. in the City of Tonawanda. (Mark Mulville/Buffalo News)