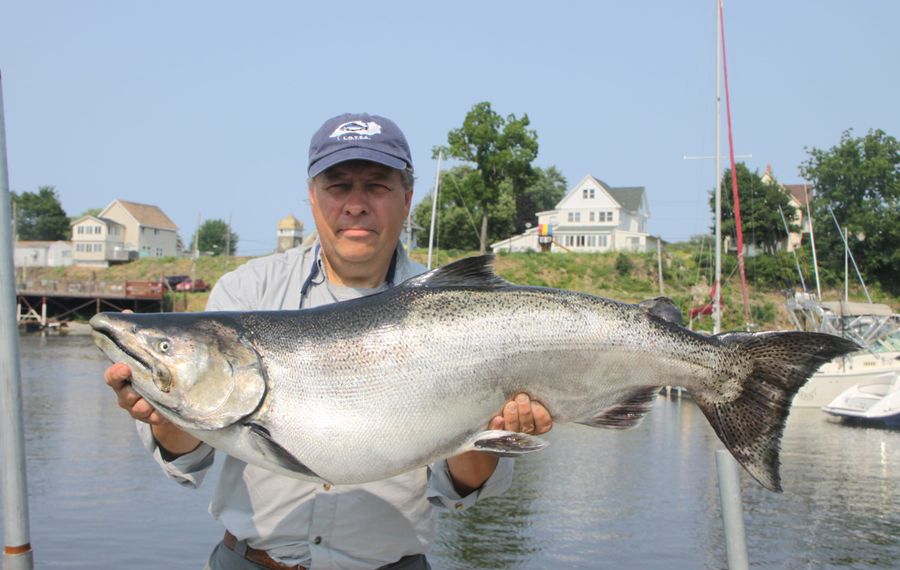 That Charles Dickens quote from "A Tale of Two Cities" is most appropriate when evaluating the status of Lake Ontario’s salmonid fishery. After coming off the best open-lake salmon fishing for catch rates since creel census records began in 1985, fishermen were hoping for huge numbers of staging fish off the rivers and streams. After all, the catch rate was 239 percent above the average for 1985 to 2017 from April to August. It was incredible.

The anglers doing all of that catching also anticipated big runs of fish in the same primary waters. Staging fish should have been better. But apart from the Salmon River, those runs have been fair at best and staging was so-so in the western part of the lake. Fishermen were looking for answers.

While salmon was on the mind of casters and trollers, the state Department of Environmental Conservation's Bureau of Fisheries tried to get everyone’s attention for a special announcement. Over the last two weeks, three public outreach meetings were held along the lake to inform anglers that there will be another reduction in Chinook salmon and lake trout stockings in 2019.

“We’re here to hold up our contract with the fishing community,” Steve Hurst, Chief of the Bureau of Fisheries for the DEC said at the meeting held at Braddock Bay State Park last week. “We are following our lake community objectives to manage this lake for a trophy salmon fishery.”

The primary purpose of the gatherings was to outline what science was telling them relative to the forage base and the alewives, the most important baitfish in the lake when it comes to maintaining a healthy Chinook salmon population. Due to back-to-back severe winters on Lake Ontario, the 2013 and 2014 classes of alewives are the lowest that researchers have seen. Bottom trawls are conducted each spring with the help of the U.S. Geological Survey and the Ontario Ministry of Natural Resources and Forestry to assess alewife numbers. 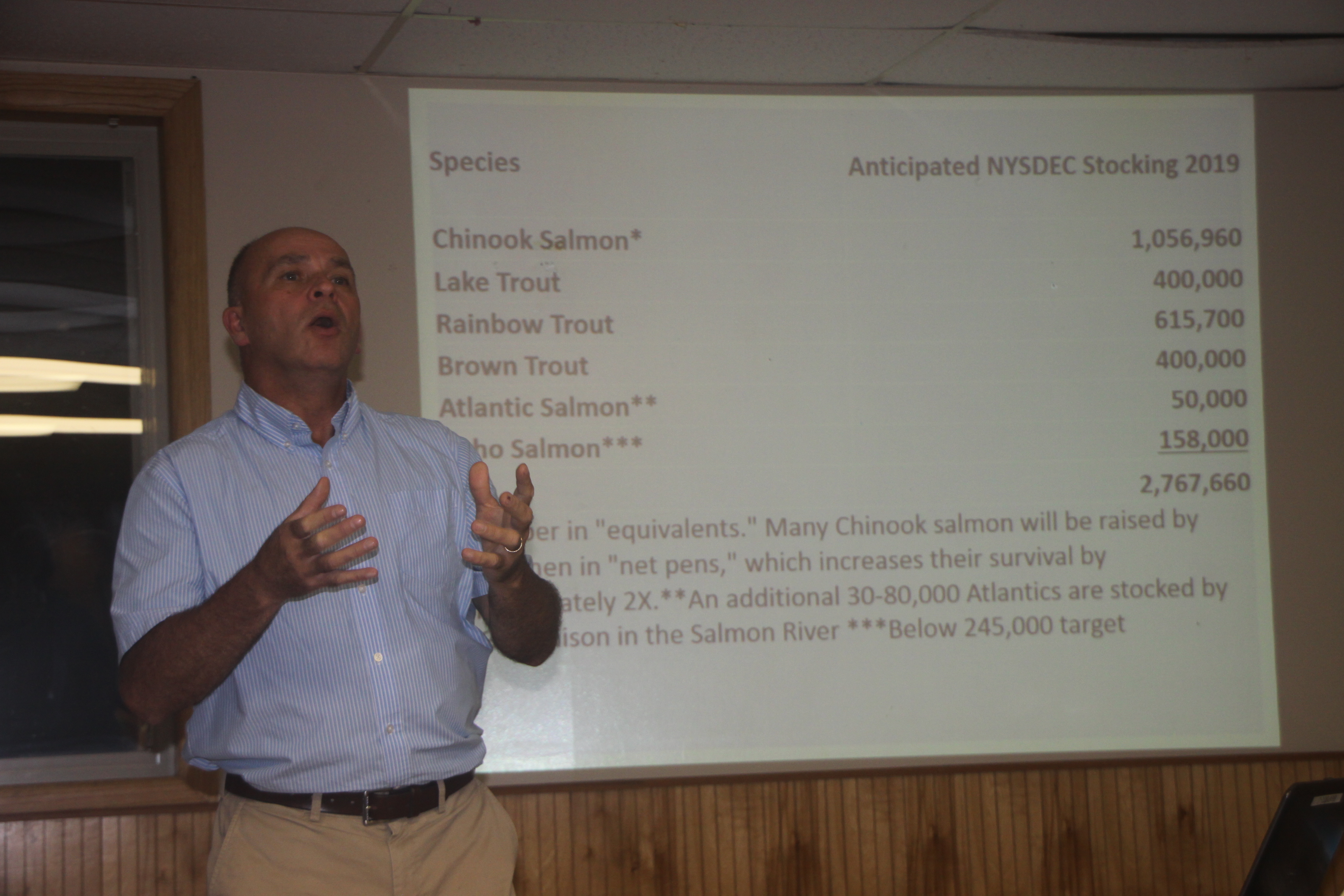 Steve LaPan, Great Lakes Unit Leader for DEC, explains the science behind the decision to make another salmon cut in 2019. (Courtesy photo)

There was some good news, like the record year class of 2016 alewives collected last year in trawls. It was huge. The 2017 class was below average, and the 2018 class will be unknown until the spring. The record class from 2016 seemed to drop significantly in the 2018 spring trawls, too. Hard decisions needed to be made.

Starting in 2017, a 20-percent reduction in Chinook salmon and lake trout was made in the lake stocking. That year on the lake, there was a record catch rate for salmon. Biologists discovered that the natural reproduction of Pacific salmon was off the charts in the Salmon River, where most natural reproduction in New York waters occurs. Did Mother Nature offset the loss of stocked fish? No one knows because the fish from the hatchery were not clipped to identify them. Lake Fishery managers have found that up to half of the salmon in Lake Ontario are the result of natural reproduction based upon earlier studies.

That’s good news and bad news, depending on your perspective. Stocked fish are planted in the lake and in pens with the intent of imprinting those fish to specific waters. When the Niagara River, Wilson, Olcott, Oak Orchard (and on down the line) receive their salmon, those are the only ones that will return in the fall. All of those naturally born fish from the Salmon River will return to the river from which they came. That’s the way nature intended it.

To add to the confusion, lake managers don’t know how many predators are in the lake. They don’t know what survival rate they are getting from the fish that are stocked or the fish that are naturally added to the system. They do know that fish raised in pens through the efforts of angler groups survive better than 2 to 1 when compared with direct stocks from the hatchery.

In 2018, the decision was made to once again reduce Chinook salmon and lake trout stocking numbers by 20 percent. It was based on science, from information collected in concert with DEC, USGS and OMNRF. The trawl numbers were down and the two-year gap of the 2013 and 2014 classes continued as they analyzed the data. Those numbers will continue to decrease with each passing year. Bear in mind that Chinook salmon, especially the adults, will specifically target adult alewives. A healthy alewife population may have as many as 8- or 9-year classes in a system. We may be down to 6 or 7 heading into 2019.

“We are managing the lake for the long term,” Hurst said.

“We are anticipating a future event in the lake,” said Steve LaPan, Great Lake Unit Leader for the DEC. “If you want to maintain a good salmon fishery, it must be managed accordingly. The salmon stocking reductions are timed so that when we hit the ‘pot hole,’ there will not be as much of a demand for forage.”

Not everyone agreed with the assessment and the plan being put forward. The Eastern Lake Ontario Salmon and Trout Association was opposed, as well as a group from Fairhaven. Many charter captains were against any further stocking cuts and felt that the forage base was under assessed.

Joe Yaeger, president of the Lake Ontario Trout and Salmon Association, said this of the information presented by DEC:

“If the sizes of the alewives are down, the caloric value is less. This means that the salmon will need to eat more to maintain the same growth rates. We noticed that salmon were smaller this year in size so that makes sense. The salmon were also very hungry in the lake this year, leading to a record catch. However, it shouldn't be just the salmon taking the huge hit. Steelhead are huge consumers of smaller alewives. We should look at cutting all species. And because we have very little natural reproduction in the western end of the lake, do not cut salmon as much if at all in the west.”

Starting in 2019, DEC and OMNRF will clip every salmon that is stocked on both sides of the lake. This will help give them a better handle on natural reproduction. Remember that it is a bi-national effort and no announcement has yet been made on what’s happening across the border. On the New York side, more than 2.7 million salmon and trout will be stocked in the lake in 2019. Of that total, there will be 1,057,000 Chinook salmon. When you factor in that more than half of those fish will be held in pens, increasing their survival rate, and that we will still receive plenty of natural reproduction, the Lake Ontario king salmon fishery will be good to very good for years to come.

Just how good will be up to Mother Nature.