Two weeks still remain in Canisius men's soccer's conference season, but the Griffs' 2018 campaign has already been a roller coaster of inexplicable lows and a couple triumphant highs.

There's been a little of everything. The positives include Dermot McGrane's side coming within one goal of drawing then No. 5 in the country Michigan State on the road, and later smashing local rivals St. Bonaventure and Niagara, both by the score of 4-0.

Heading into Wednesday's 4 p.m. home clash against high-flying Marist, which just swept the weekly conference awards and stands at 5-1 in the Metro Atlantic Athletic Conference, the Griffs (4-6-1 overall, 2-3 in MAAC) have won two straight and are cautiously optimistic.

The season's lows, however, are troubling for a veteran squad picked to win the conference before the preseason. A 10-0 loss to Akron in the non-conference schedule speaks for itself - "It's not the end of the world, but it's embarrassing," McGrane said about that walloping - and the fact the Griffs had only 10 healthy players at the beginning of preseason was perhaps a harbinger of things to come. 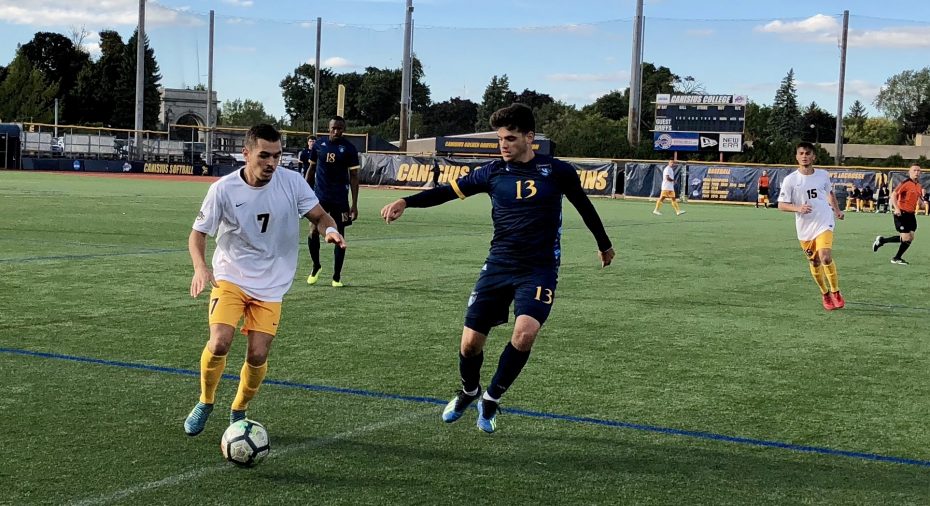 Three losses - by a composite score of 13-2 - to begin MAAC play spiraled Canisius to rock bottom, with a discouraged and slightly distraught McGrane telling Griffs TV: "We've got to figure out a way to keep teams off the score sheet and get on the score sheet ourselves. We've got to get back to work and come up with solutions."

To their credit, the Griffs could have quit on the season, but they kept two clean sheets against Niagara and Monmouth, the two MAAC minnows, and now host the Red Foxes with a bit of confidence.

"We've just got to get on a roll," McGrane said hopefully after shellacking Niagara. "We're not out of things at all; it's so early in the conference season. We got to turn one win into two, two into three, and you get to that point and you start getting some momentum."

Here are five things to know about Canisius:

Who are these Griffs?

It's the million dollar question right now. Is Canisius the team with the leaky defense, the one shockingly vulnerable to opposing set pieces, that melts down after conceding? Or are the Griffs the lightning-fast counter-attacking side with an entertaining style, that scores goals in bunches and dictates play rather than absorbs it?

For a veteran side, the mental makeup of the team has been an unexpected concern. Injuries have certainly taken their toll, but those are unfortunately a factor many Division I squads face.

Intangibles - the Griffs' grit, leadership and guts - are just as much in need as the return to health of several key players. Senior midfielder Evan Walsh is Canisius' most vocal leader, but the foreign influences in the side - five in the regular rotation are recent Italian imports with immense talent but varying levels of comfort with English - can sometimes hamper communication.

The Griffs have been awarded three red cards in the 11 matches, with McGrane sent off in the 65th minute of the win over Monmouth. He'll miss the clash against Marist, with assistant Gary Bruce - a former coach of the Western New York Flash of United Women's Soccer - temporarily taking the reins.

Alessio Atzori and Wes Rider were the two other red-card culprits, while Manuele Cavazzoli missed the Monmouth contest because of yellow-card accumulation. Discipline will be a key story line, too, as the MAAC slate wrap up.

Is anyone healthy to play?

Injuries continue to decimate the side, preventing the Griffs from refining a consistent lineup, especially defensively. That situation became so dire that, in what appeared to be an equally wise and desperate move, McGrane called upon seniors Will Pauls and Mo Kretschmer - midfielders for almost the entirety of their careers - to man the fullback spots in the win against Niagara.

One returnee has made an unmistakable difference: 6-foot-6 center back Alex Grattarola missed the latter portion of non-conference and then the first three MAAC games due to a severe ligament injury, but returned for the last two victories, each by clean sheet.

Canisius men, women carve out strong results in Battle of the Bridge

The preseason all-conference pick - one of four Griffs on that list - is obviously a difference maker, with the length and stride to cover up for defensive miscues by his fullbacks, and the aerial ability to cut out some of the set pieces that crippled Canisius earlier this fall.

Iceland native Bjarki Benediktsson has missed time to injury more than once this year; he's currently day-to-day after going down in the MAAC opener against Quinnipiac. If the back line is at 100 percent, then Benediktsson slots in at left back, surges forward with the attack and is lethal on set-piece services. 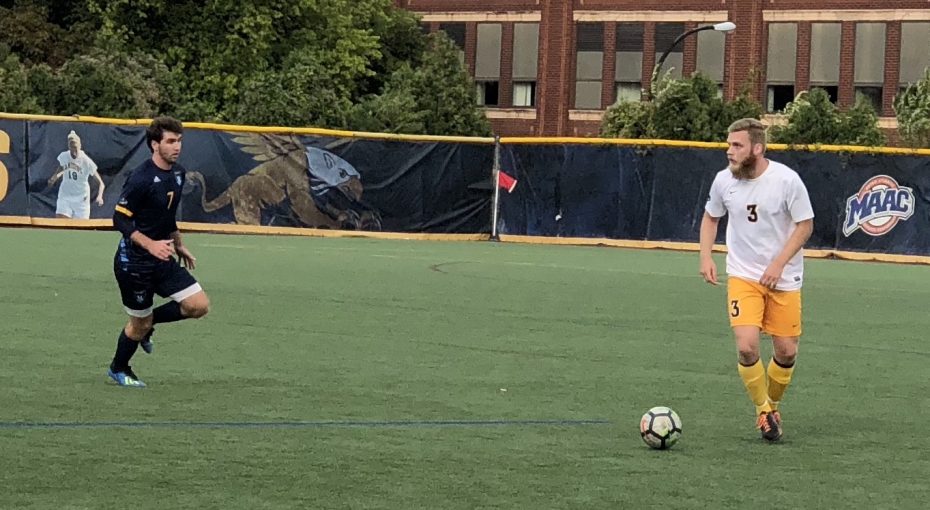 Versatile defender Bjarki Benediktsson's absence has been noticeable over the last four and a half conference games. (Ben Tsujimoto/Buffalo News)

"We've been dealing with so many injuries, like I've ever seen before," McGrane said after Canisius knocked off rival St. Bonaventure. "Ten guys arrived at camp hurt. We're not getting these ones back, a lot of them. It's been bad. We're way behind where we should be."

The absences put inexperienced players in uncomfortable positions. Vince Cancilla, who played on the wing as a freshman, was deployed at right back for a stretch. When Grattarola and Benediktsson were both out, and Atzori gutted through some nagging knocks, Bilel Bai - a freshman midfielder - deputized at center back.

Offensive-minded defender Giovanni Coraggioso, who missed most of his freshman season with injury, seemed lost without the comfort of two steady center backs.

Good teams, such as the Quinnipiac Bobcats, Fairfield Stags and the Iona Gaels, exposed the trio of Cancilla, Bai and Coraggioso, prompting a tactical change against Niagara and then Monmouth. Will the revised approach work against a title contender like Marist? 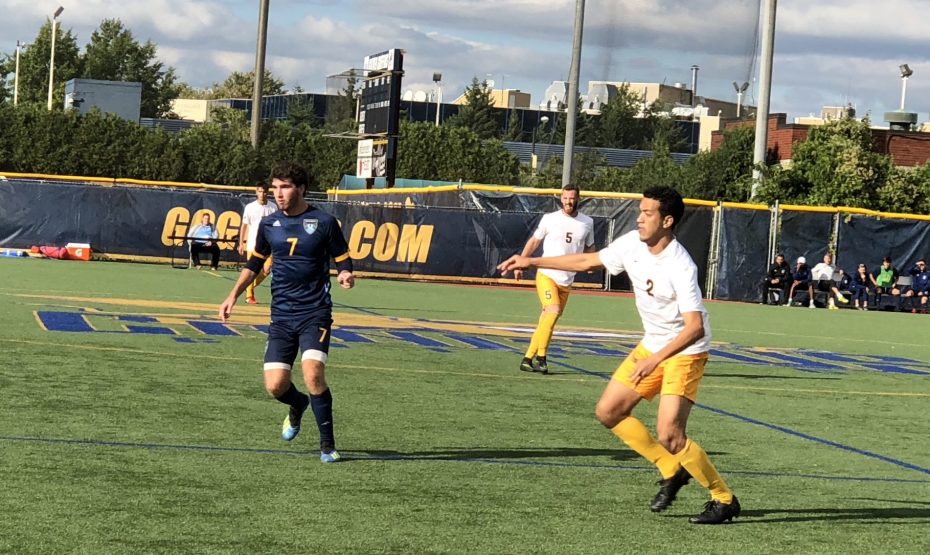 Freshman Bilel Bai, from Italy, has been forced into the lineup this year due to his teammates' injuries. (Ben Tsujimoto/Buffalo News)

McGrane was critical of his offense, even after potting four goals against Niagara, claiming his attackers were too unselfish and needed to fire more shots on frame. With virtually every major contributor - with the exception of maybe Eric Strauchen - back in the fold from last year, when the Griffs scored a whopping 45 goals in 20 matches, the 2018 production - 18 goals in 11 games - is more lackluster.

Even so, Canisius is at its most dangerous when Grand Island alum Troy Brady (five goals, three assists) and St. Joe's product Hunter Walsh (three goals, two assists) explode out of their own third on the counter attack. It's not rare to see either winger sprint 40 or 50 yards, dust defenders and create scoring chances for each other. The sheer pace of the pair is electrifying.

"It's massive," McGrane said of his team's collective pace. "When you're playing Michigan State and Akron, it doesn't show up as much because they're the same. A lot of the teams we're facing now will have a hard time matching our speed. They might have one guy who can handle it, but not four, five or six." 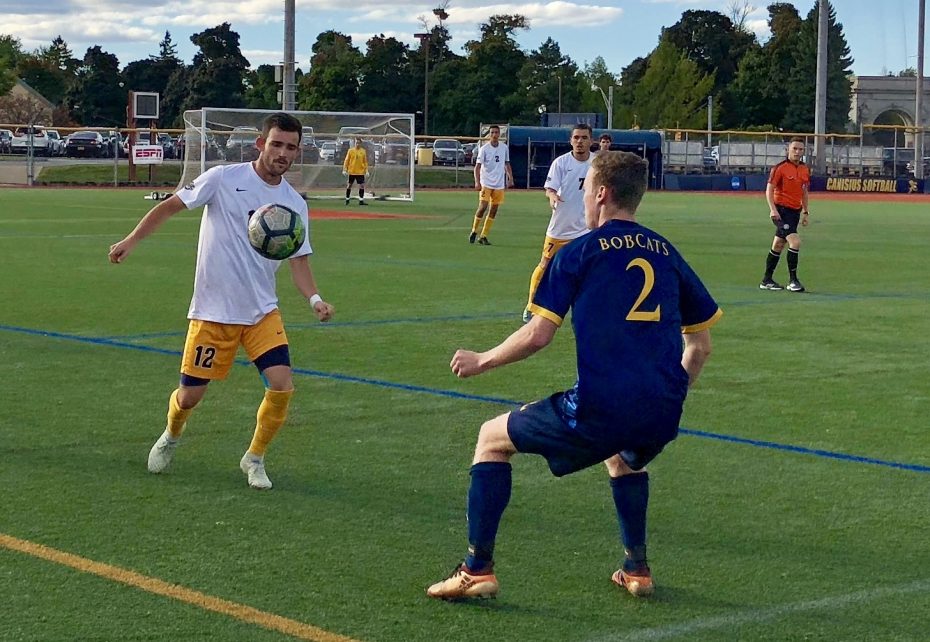 Blair, the mercurial Jamaican who's been honored by the conference in three of his four seasons on campus, has been quiet this fall, partly because Canisius has spent an unexpected amount of time defending.

The senior's willingness to compete at both ends is encouraging - and marks considerable growth from his years as an underclassman - but McGrane must hope to receive considerably more than the three goals and one assist he's gotten so far from his talisman.

Dermot McGrane has a penchant for finding undersized overachievers. For the four years before this, that was Lucian Preis, a hard-nosed leader who selflessly accepted a role at outside back in an emergency situation as a senior.

Now, it's senior transfer Will Pauls - in his third year with the Griffs after a season at Radford - who's one of the first names on the team sheet thanks to his consistency, quickness and avoidance of mistakes. The ball seems glued to his feet; the New Jersey native can turn sharply under pressure, regularly plays the high-percentage short pass and often moves the ball positively rather than negatively.

The senior was one of the first Griffs to rebound from the demoralizing pounding at Akron.

"A lot of the guys were down after a big loss like that," Pauls said. "It's a top 25 team, so we had to put that into perspective."

Whether he slots back into the midfield or continues to fill in at left back, Pauls is an unheralded engine who's invaluable to Canisius.

While capturing the regular-season conference title seems improbable now, there's still a solid possibility that the Griffs finish in the top six, which would qualify them for the MAAC Tournament. 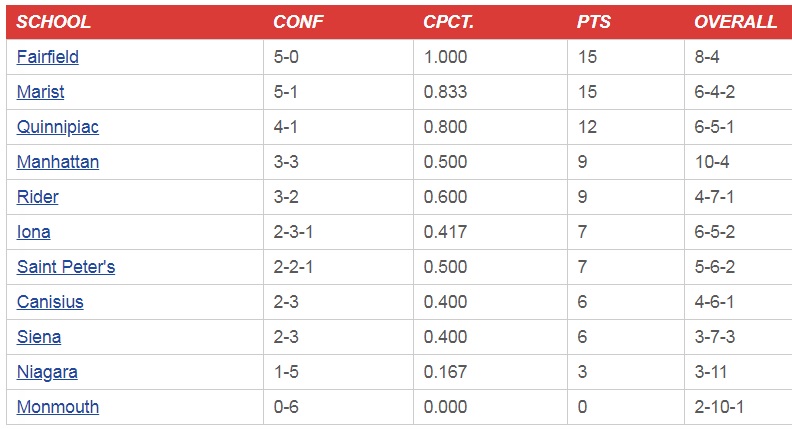 After the clash against Marist on Wednesday, Canisius starts a stretch of four games in 12 days, with home contests against St. Peter's and Rider sandwiched by visits to Siena and Manhattan.

From the MAAC's perspective, the season's final two weeks have set up brilliantly, as many of the sides bunched together in the standings play each other with a playoff berths on the line.

After hosting a quarterfinal last season - in which the Griffs beat Iona, 1-0 - Canisius fell to Rider, 3-1, in New Jersey. The Broncs then fell to champion Fairfield in penalty kicks.

Now two months removed from the ballyhooed preseason prediction, McGrane has a balanced impression of the MAAC.

"[We're] no secret," he said flatly. "No one overlooks you anymore - you're going to see everyone's best game, but after this first part of the year, [the focus] is maybe not so much on us anymore." 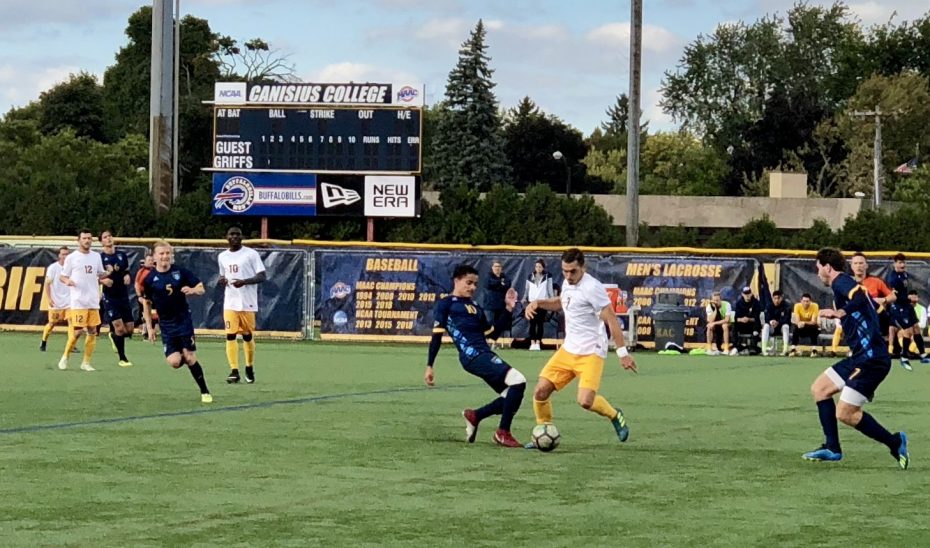 Cavazzoli digs into a tackle as teammates and opponents look on. (Ben Tsujimoto/Buffalo News)