No need for a shovel. Yet.

But, the first flakes of the 2018-19 winter season are expected to fall late Wednesday into early Thursday morning across Western New York, with chances for some minor accumulation in the higher elevations, according to National Weather Service forecasts.

Then, later in the weekend, forecasters are eyeing a chance for another round of wet snow into early next week thanks to another trough of cold air and an Alberta Clipper system.

How 'early' is TOO early for Buffalo's first snowfall?

Meanwhile, forecasts show gusty conditions are expected to persist through Thursday morning with chances for some lake-effect rain showers across the area.

An approaching storm system with a trailing cold front is expected to cross Western New York Wednesday, which is expected to keep temperatures below normal.

Bands of lake-effect precipitation are expected to set up off Lake Erie and Lake Ontario. 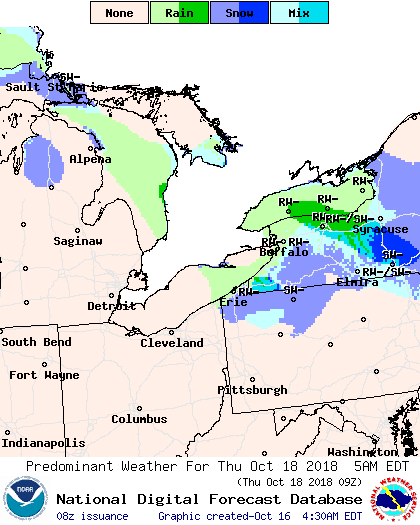 Snow is expected to be the predominant precipitation across much of the higher terrain of Western New York overnight Wednesday. (National Weather Service)

Forecasters said most of the lake-effect showers off of Lake Erie will be focused across the higher terrain of the Chautauqua Ridge. Forecasters are also keeping their eyes on the chance for the northwesterly flow to enhance lake-effect activity from as far away as Lake Huron.

"As far as precipitation-type goes, it will remain all liquid through late afternoon or early evening Wednesday," the weather service said. "Some wet snow will first mix in across the higher terrain later Wednesday evening with the higher terrain going to all snow overnight into early Thursday."

Although the air aloft will be cold enough to support wet snow across the lower elevations, forecasters said the layer of air closest to the surface will be warmed enough in areas in close proximity to the warm lake waters to keep precipitation liquid. Away from the immediate lake shores, some wet snow is likely, forecasters said.

"Any accumulation will be minimal with nothing more than a spotty light coating on the grass across the higher terrain, and possibly in the more dominant band southeast of Lake Ontario," the weather service said.

Forecasters said overnight lows Wednesday are expected in the mid 30s in lower elevations and low 30s in higher terrain. Gusty winds over 20 mph will make it feel like it's in the 20s.

The next chances for snow could come later in the weekend.

Temperatures should rise to near 60 degrees on Friday and into the lower 50s on Saturday, however, another deep trough of cold air will get entrenched across the region late Saturday into Sunday.

"This will support more northwest flow lake-effect, with some wet snow again mixing in as temperatures drop to below normal," the weather service said. "Another clipper will cross the Great Lakes Monday with a chance of a few showers, which may mix with wet snow in the morning."

High temperatures on Sunday and Monday aren't expected to make it out of the 40s.

It's a stark contrast to last week's first three-day stretch of 80-degrees weather in October in more than a half-century.

The average high temperature in Buffalo for this time of year is in the upper 50s.