A year ago this week, Davoneo Dolson kept seeing the photographs and feeling a jolt of recognition. Buffalo Police Officer Craig Lehner had died during a training exercise in the Niagara River. His image appeared alongside countless media accounts of the tragedy, and Dolson quietly thought:

I think I remember him.

Their encounter had been brief, only a few seconds, outside Middle Early College High School in Buffalo, where Dolson was a student. At the end of one school day, the teenagers poured out the door. Some of Buffalo’s K-9 officers were parked in front.

A couple of dogs were barking from inside the vehicles, worrying students who were leery of the animals. Dolson recalls how one officer stood casually by the curb and made conversation with the teens, reassuring them, asking in a matter-of-fact way how it was going, both in school and life.

For an instant, that officer locked eyes with Dolson. To this day, Dolson believes it was Lehner. When someone is genuine, Dolson said, you usually sense it. There was a quality to the officer, even for that passing moment, that made Dolson believe the guy's focus was entirely on him.

It is part of the reason he finds such meaning in being the recipient of the first local scholarship offered in Lehner’s name, an award offered to a graduating high school senior who intends to major in criminal justice.

“I think,” Dolson said, “he wanted to give the community, the whole community, a better outlook.” 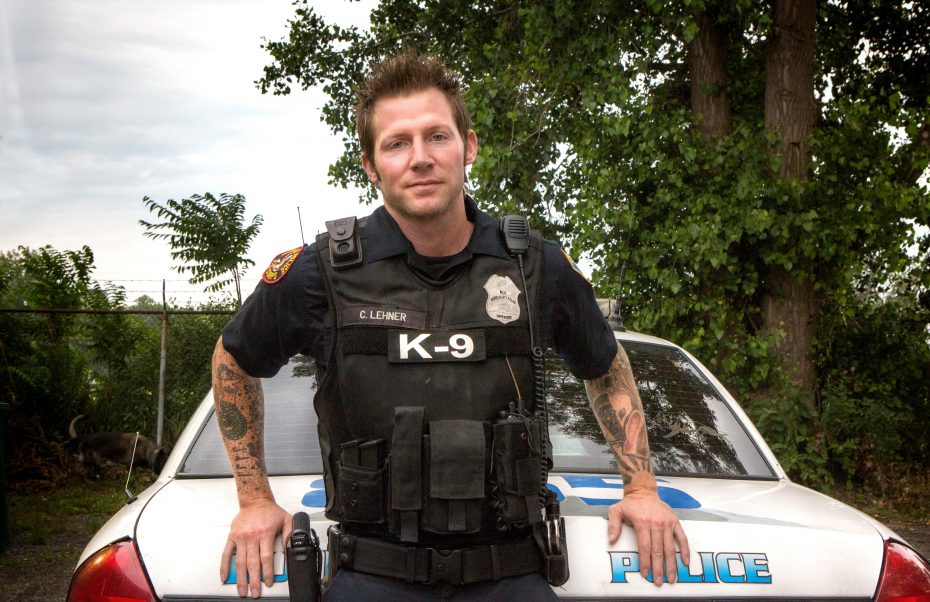 The scholarship is overseen by the Judges and Police Executives Conference of Erie County. The intent is sustaining and celebrating the qualities that defined Lehner. The committee that selected Dolson last spring included some of Lehner’s family members, as well as several of his closest friends from within the police department.

There were many applications. Tommy Champion, a police lieutenant who for years was Lehner’s partner on patrol, said Dolson's name was chosen repeatedly by different committee members who interviewed him separately.

The committee was “looking for a fire, a spirit,” that personified Lehner, Champion said.

Raised in Akron, a National Guard veteran of a deployment to Iraq, Lehner had a burning curiosity and a relentless work ethic, his colleagues say. When he decided to become a K9 officer, for instance, he devoted himself to building a connection with his German shepherd, Shield.

Most important, to Champion, Lehner had a vision that allowed him to see Buffalo as a complicated mosaic. Some of Champion’s most powerful memories of Lehner involve a kind of disciplined humility, a willingness to really listen, the result of what Champion calls "outrageous conviction."

Lehner understood the importance of learning the city, and respecting the dynamics that shape it – a quality Champion sees as the primary hope in building trust between police and neighborhoods of struggle.

Even as a teen, Dolson offers some of that same insight. He grew up on the East Side. His mother, Glendora Alexander, raised Dolson and his older sister, Darnisha Tarver. Alexander would get up early to help her children prepare for school, then pay the bills by working as a patient health navigator for a medical firm.

Dolson's father is in prison. While his parents are no longer together, he said his mother, father and sister – who  earned her master's degree in criminal justice – all have reinforced the same message since his earliest memories.

“You’ve got a future, you’ve got big plans, but you’ve got to get an education,” Dolson said.

In that sense, Dolson said he believes he is lucky. Growing up, he has seen too many young people who go without that kind of daily support and affirmation. Too many teens, he said, feel cornered, alone and overwhelmed.

As they grow older, as that hopelessness becomes suffocating, it can too easily be channeled into addiction, despair or even violence.

“You’ve got to find a way to let them say what they’re feeling,” Dolson said. “A lot of these kids don’t really have a way to express themselves.”

His aspiration is becoming a youth counselor, someone who understands and can help offer direction, possibly through law enforcement. Susan Doyle, principal of Middle Early College, said she immediately thought of Dolson and those dreams when she learned about the $1,000 scholarship.

As a city educator, Doyle had an affinity for what Lehner represents. Her grandfather, Charles Cannan, was Buffalo police commissioner. Three of her brothers became officers. She knew it was important to nominate the right student.

Dolson, she said, “is really true to himself." Doyle joins with Danielle Steele, a special education teacher at Middle Early College, in saying that Dolson underplays the magnitude of his own achievements.

He is classified as having a learning disability. Speaking in front of groups of people, especially strangers, was particularly torturous.  It would have been easy for him to turn his back on school, but Steele describes Dolson as an extraordinary student.

She said he routinely stayed late after dismissal to catch up on his work, sometimes even coming in on weekends. At 17, he graduated from high school. He is now a sophomore at Erie Community College – he still comes back for academic support from Middle Early College – and he intends to move on to SUNY Buffalo State once he receives his associate’s degree, most likely in May. 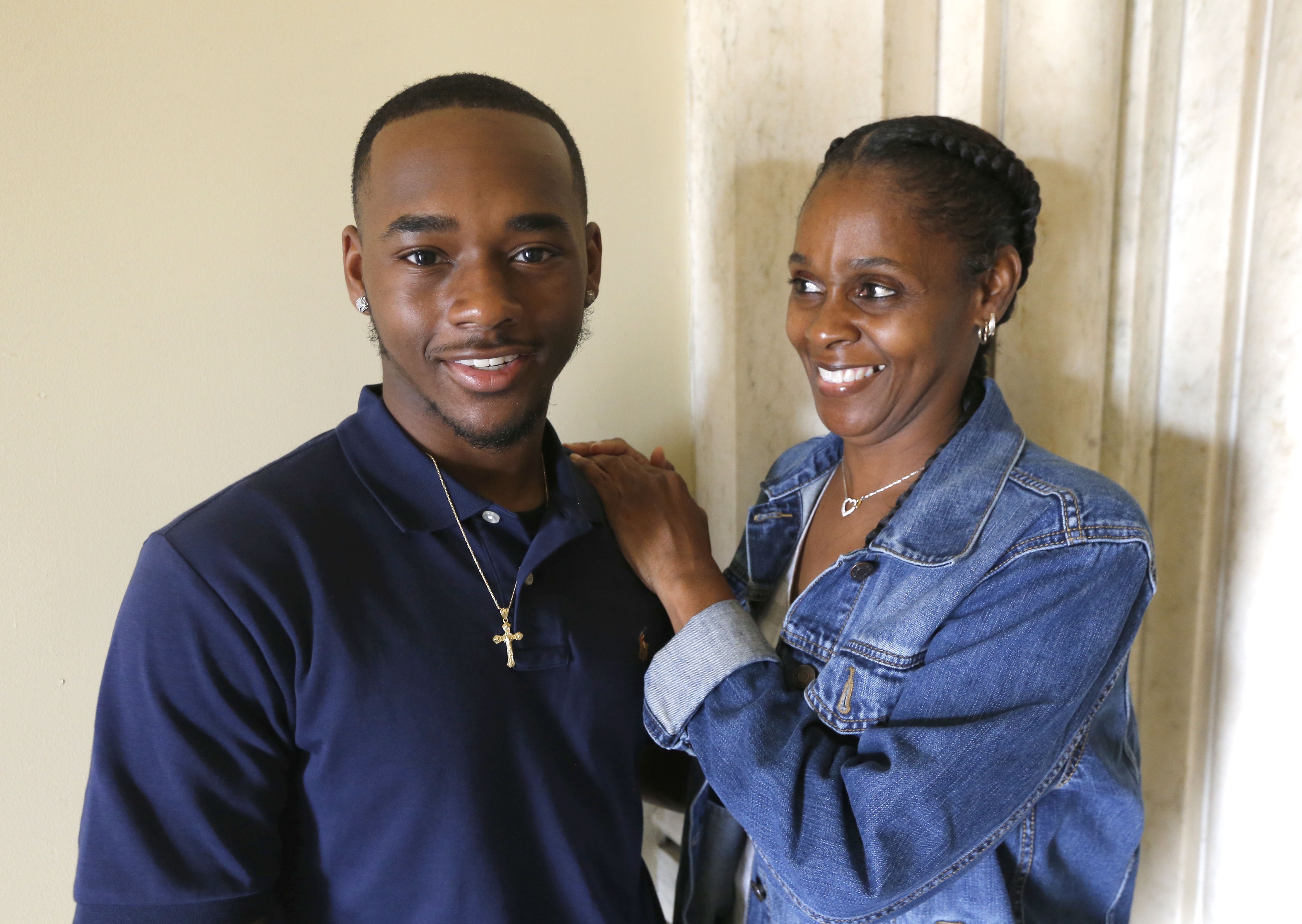 Dolson said he is intensely aware of his good fortune in having a mother who was there to support him, to give him rides whenever he needed them, to remind him of his own value – and of a sister who proved to him, by example, what he could accomplish.

“I think what you’ve got to do, as a parent, is a lot of showing,” said Alexander, Dolson's mom. “Too many of these kids see nothing else, then just get sucked into the streets.”

He speaks with passion of what he observes in many of his peers, of the intelligence and savvy it takes to survive when everything seems set against you. His mission as a counselor would be to give teens the confidence to open up about their own self-doubt, to try and shift their everyday survival skills into a way of building a different life.

What they often need, from Dolson's perspective, are mentors who really see them.

That was the key. In that teenage insight, the committee found Craig Lehner.