A Catholic church deacon who said he was molested by a priest as a teenager has become the second cleric to call for Buffalo Diocese Bishop Richard J. Malone to resign over his handling of clergy sexual abuse allegations.

Paul C. Emerson, a deacon at St. Joseph University Church in Buffalo, said in an interview with The News that Malone is complicit in a cover-up of the abuse and needs to step down for healing in the diocese to begin.

“I think he should resign,” said Emerson. “The guy has lost the confidence of a great number of people, people that need to trust their bishop.”

“I think there should be a cleansing of the bishops that were involved in this in any way, shape or form,” he added.

Emerson joined Paul L. Snyder III, a deacon at St. Mary Church in Swormville, in urging Malone to step aside immediately, as a clergy sex abuse scandal continues to rock the Buffalo Diocese.

A retired priest's admission to The News in February that he had molested dozens of boys in the 1970s and 1980s set off the scandal that has unfolded in media coverage for nearly eight months. It escalated in August with the leak of internal church documents to WKBW-TV. The documents showed that Malone kept two priests in ministry despite complaints of inappropriate behavior, prompting calls for the bishop's resignation from Snyder, Rep. Brian Higgins and Lt. Gov. Kathy Hochul, among others.

Malone has apologized but said he will not resign.

The two deacons represent only a small fraction of the 133 permanent deacons in the diocese, and so far no priests have publicly said Malone should step down.

Emerson, 64, also is now the second local cleric to state publicly that he was sexually abused by a priest.

Emerson made that disclosure at a St. Joseph University parish forum in September for church members concerned about the sex abuse scandal. Just days before Emerson’s remarks in the forum, the Rev. Ryszard S. Biernat revealed at a Mass that he was a victim of sexual abuse by a priest.

Biernat declined to comment further to The News about what happened to him. But the 37-year-old priest has told other people in the diocese that a veteran Buffalo priest sexually harassed and abused him when Biernat was in seminary studying for the priesthood.

Abused as a teen

Emerson said his abuse dates back to 1970, when he was a 16, and involves encounters with two priests in separate incidents. Emerson grew up Catholic, attended Infant of Prague parochial school in Cheektowaga and served as an altar boy.

“We were a family that adored priests, thought they sat at the right hand of God,” said Emerson.

So Emerson said he was thrilled when the Rev. Loville Martlock asked him to come along on a camping trip to Utah with another boy and the Rev. Mark Friel.

The last day of the trip, Emerson said Martlock gave him Coors beer before massaging him and groping him inside a tent until Emerson fought off the priest’s advances.

Emerson said he didn’t tell anyone at the time. 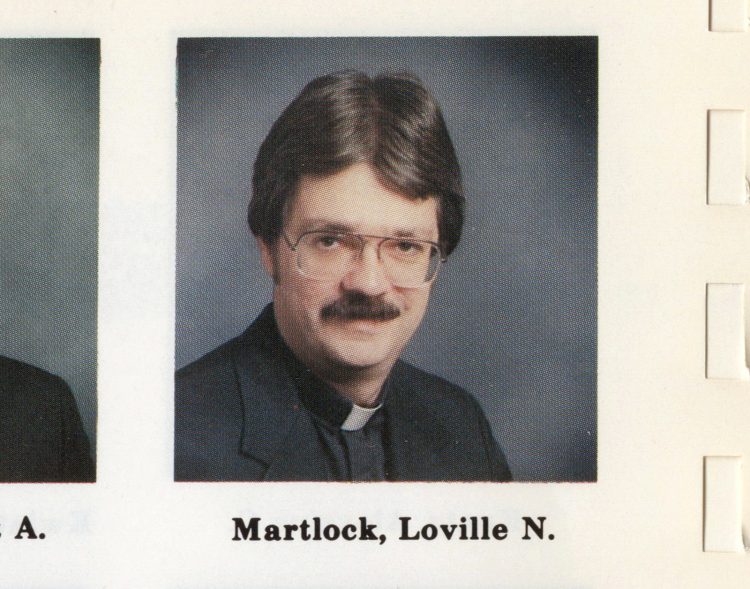 But about a year after the camping trip, Emerson said he confided in another priest, the Rev. James Spielman, who invited Emerson to his cabin in Belmont.

At one point, Spielman dropped his pants in view of Emerson and masturbated to a pornographic magazine, Emerson said.

“Here I’m thinking that I’m trusting this guy for counseling,” said Emerson, who asked Spielman to drive him back to Springville, where Emerson had left his car.

Martlock, Friel and Spielman all were included on a list of 42 priests the diocese identified in March as having been credibly accused of child sexual abuse. Malone in 2016 also quietly authorized a $1.5 million settlement for a man who alleged in a federal lawsuit that Spielman had repeatedly molested him when he was a teenager in the late 1970s and early 1980s.

Marlock died in 2014. Spielman, who resigned from the priesthood in 1993, could not be reached.

After his encounter with Spielman, Emerson said he buried the incidents in his mind and didn’t talk about them for years.

“If it even came near the forefront, I pushed it out because I felt culpable in some way,” he said. “If not guilt, there was shame, maybe a mixture of both.”

Emerson never lost his faith or his love for the Catholic church. He even explored joining the priesthood, spending six months in an Ogdensburg seminary before realizing it wasn't a good fit.

He married his wife Wendie in 1978, and the couple celebrated their 40th anniversary earlier this month. They have a son and three grandchildren. Emerson is retired from the state Department of Public Service, where he worked in utilities inspections and auditing.

Wendie Emerson has known for years about some aspects of Emerson's abuse, but he didn’t reveal until recently the entire story of what he had experienced.

“It just came out in pieces, really, until probably this year,” she said.

He also told an abridged version to his brother and a few deacon friends years ago.

Emerson said he first tried to report the abuse to the diocese this past March, as he struggled with old emotional wounds that were reopened by a flurry of new stories about the Buffalo scandal.

Emerson said he called a diocesan hotline three times, only to be greeted by a recorded message. Each time, he said he left a voicemail. He didn’t get a return call until more than two weeks later, when a deacon friend called on his behalf and demanded that someone touch base with Emerson. Jacqueline Joy, the diocese's victims assistance coordinator, ended up talking with Emerson.

Malone, who has spoken directly with other victims, never called to offer Emerson an apology or words of encouragement, Emerson said.

Emerson wrote a scorching letter to Malone and Joy in April detailing the sequence of events, although he did not call for the bishop to resign in the letter or in person.

“Probably once or twice during these past six months or so, or since March, I thought, ‘What the heck am I doing as a deacon? Why am I still a deacon?’” said Emerson. “And then the next week at the Mass I was there on the altar and I just said, ‘I feel right being here. This feels right. I feel at home here.’”

Emerson said he was able to start unburdening himself by talking more with his family and trusted friends about what happened nearly 50 years ago.

When some other Catholics suggested to him that the media was overzealous in its coverage of the abuse scandal, Emerson let them know, too.

“I said, ‘No, we need to hear this. If this can help unburden somebody, then we need to hear this, and it certainly has helped me. And then they say, ‘What? What do you mean?’ And then I told them my story,” he said. “Slowly but surely, I’ve found a way to tell people, at least to speak to them, that don’t be naïve, that this stuff is actually happening. There’s a cover-up. There’s a lot of bad apples out there. I don’t know all of them. But I do know three of them, personally.”

About 150 people showed up on a Tuesday evening for the forum in St. Joseph University Church.

Participants were invited to speak about their anger and frustration with the church. Three people addressed the crowd with stories of being sexually abused, although not by priests.

Then, as the moderator was wrapping up the event, Emerson rose from his seat and told his story.

“Probably the most powerful thing of what he said was, ‘I need help.’ He was able to open himself, to say I need help. And it was extremely powerful,” said Wendie Emerson.

The Rev. Jacob C. Ledwon, pastor of St. Joseph University Church, said it was “a kind of role reversal” for Emerson, who usually is the person offering help to others.

“He was putting himself out there as someone who needs to be ministered to,” said Ledwon. “I thought it was incredibly courageous for him to do that because Paul is a very private person. The response that night from people was one of complete affirmation.”

Emerson said he had no intention of standing up and speaking that night. His eyes welled up with tears as he recalled the outpouring of support he received.

"I'm still processing. I'm working it out. The pain of the abuse is pretty much over. But it stings when you find out that holy crap, they knew about this," he said.

He agreed to speak to The News in the hopes that it might encourage other people to come forward and "get this off their backs, because it's too painful to keep it bottled up."

Emerson said he was not being cavalier in his criticisms of Malone, nor was he excusing cover-ups by previous bishops and diocesan administrators.

Malone had an opportunity when he arrived in Buffalo in 2012 immediately to address the cover-up of abuses in this diocese, he said.

And given Malone's understanding of what unfolded in the Archdiocese of Boston in 2002, where he was an auxiliary bishop, Malone should have known not to perpetuate for nearly six years the secrecy that breeds scandal, Emerson said.

“If Malone did what you think he would have done because of all the crap in Boston, he should have come in here right away, and I think it would have been a totally different church. People would have been a lot more forgiving, because then he wouldn’t have had anything to ask forgiveness for himself. But by covering it up, he’s partially complicit in this," he said. “I definitely think Malone should have done something from day one. He didn’t, at least nothing that I can see."