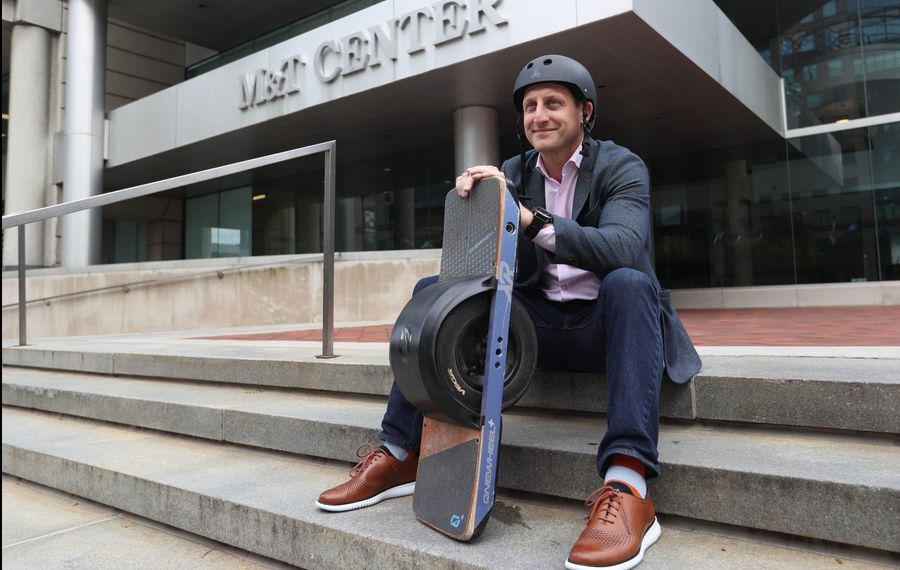 Michael A. Wisler rides to work on what looks like a one-wheeled skateboard.

He's a mountaineer who has scaled three of the "seven summits of the world" — the tallest peak on each continent — and has ambitions to climb the other four.

He is also the chief information officer for M&T Bank, and he wants to make the bank, as well as Buffalo, an appealing destination for information technology professionals.

Wisler, 43, is a central Ohio native. He worked for 18 years at Capital One, spending part of that time in England but most recently in the Washington, D.C., area. Wisler joined M&T in April and said he already feels at home here. He is renovating a condo just down Main Street from his office.

Wisler reflected on his new job, the view from a high peak, and his favorite mode of transportation:

Q: What does the chief information officer do?

A: I'm accountable for all of the technology that enables the business for the whole of the bank, the strategy for how we go about delivering technology, and then the actual execution. So many of our businesses are businesses not unlike others that need to run 24/7.

Most of that is technology-enabled, from data centers to managing large third-party partners, to thousands of technologists that enable the business, both maintaining it and innovating it. As well as making sure that we're looking out into the world and understanding what's next from a technology perspective and really making sure that we're there to make sure that our businesses have all that they need, so they can win in the market and continue the kind of success they have had. 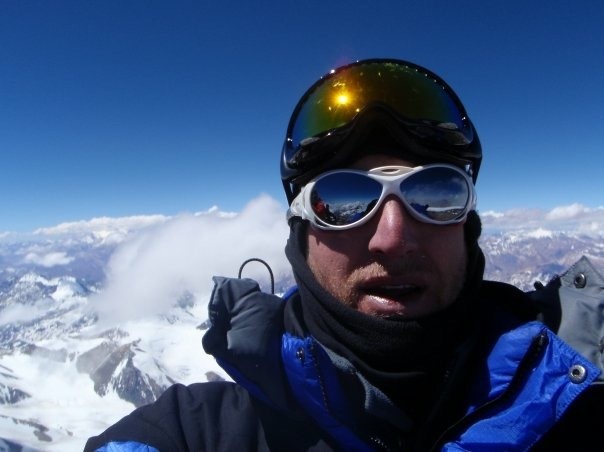 Michael Wisler at the top of Mount Aconcagua in Argentina, at 23,000 feet. (Provided photo)

Q: M&T's chief financial officer, Darren King, recently talked about the bank needing to catch up in its technology investment. What does that mean to you?

A: I think that everybody's got a real challenge when it comes to just the blistering pace of change. When you think about the amount of change technology is bringing, in positive and otherwise ways, to all of our lives, I believe that we're living in what I sometimes describe, although dramatically, as a really Cambrian event, and I think technology's at the center of it. Never before has so much changed in so little time and so much become more accessible.

The iPhone just turned 11. Think about how huge parts of our entire lives have changed meaningfully in just that short period of time. We've taught, and we're teaching, an entire generation that they should be able to access whatever they want, whenever they want, through whatever channel that they want.

And businesses who grew up prior to that have to respond. I think M&T is no different than any other entity. When Darren talks about catching up, I think we're catching up with expectations of the consumers as much as we are with anything else.

Q: What do you hope to accomplish in your job?

And there's a war for talent going on. Software engineers in particular but technologists in general might be the most scarce resource on the planet right now. I think part of our equation is to going to be to continue to grow as M&T grows and make sure that we're a destination of choice for some of the greatest talent in the region. I think with the IT Buffalo work and with many of my peers and local technology leaders, we're really reinforcing and making sure that everybody knows that Buffalo is a great place, and a great place to have an engaging career and a great place to make a difference, not only for some great companies but for a great community.

Q: What's the story behind the Onewheel you ride?

A: I ride it pretty much anywhere. I met the inventor of this a few years ago in San Francisco, and it's a pretty serious piece of engineering. I believe it is the first real incarnation of the hoverboard that "Back to the Future" promised us. It's one wheel, it will go about 19 miles an hour, it will go about 18 or 19 miles on one [battery] charge.

I think it's going to change urban commuting, I really do. It's impressive. I've ridden it from downtown to the zoo and back, I ride it all over the place. There's a lot of people who like to stop and talk about the Onewheel, and quite a few folks around here have given it a try.

Q: What is it like at the top of the world's tallest peaks?

A: It's usually pretty cold, usually pretty windy. I think the top of Mount Aconcagua [in Argentina] was about minus 40 [degrees] and had probably a 50-mile an hour wind. Summit day can be pretty challenging, sleeping at 20,000 feet and then trying to get up to 23,000 feet.

It's not for the faint of heart, for sure. You have to like a bit of suffering to like mountain climbing, I think. But I do think that being at the top of the mountain, like literally at the top of a mountain, it can be pretty spiritual.

Aconcagua is so high, at 23,000 feet, you can actually see the curvature of the earth. You're actually up that high, your horizon viewpoint is so long. And it's pretty inspiring. The unfortunate thing is, you don't get to stay up there that long. You get up the top, you can get up there for maybe a half hour, 45 minutes. … Then you've got to head down, because oftentimes, most of the mistakes are made taking too much time at the top and not coming down in time.