Little has gone right for the Niagara University men's soccer team since the Purple Eagles reached the 2012 NCAA Tournament. In the last five and a half years, the Purple Eagles have won 20 matches, lost 73 and drawn 11.

It's been a dark stretch for the program, but even though wins still aren't coming routinely, third-year head coach Bill Boyle has Niagara competing. When asked during the non-conference slate how difficult this season has been, Boyle doled out reasons for optimism.

"It's been the most enjoyable in the three years I've been here because it's a tight group," he said. "In all of our games we've been competitive; there's a couple 3-0 games that are not really 3-0 games.

"We've played pretty consistent, been able to create chances and can defend with anybody. I feel pretty good about where we're at. It's been trying because you can do everything well and still lose, as we know."

With the annual Battle of the Bridge, the designation of the rivalry between the Purple Eagles and Canisius, on tap for 7 p.m. Oct. 10 on Monteagle Ridge, here are five things to know about Niagara (3-9 overall, 1-3 in Metro Atlantic Athletic Conference).

Now that they're not getting steamrolled, Niagara must find a way to pull out close games. The Purple Eagles lost their first three MAAC games by a score of 2-1, against Siena, Fairfield and Rider. 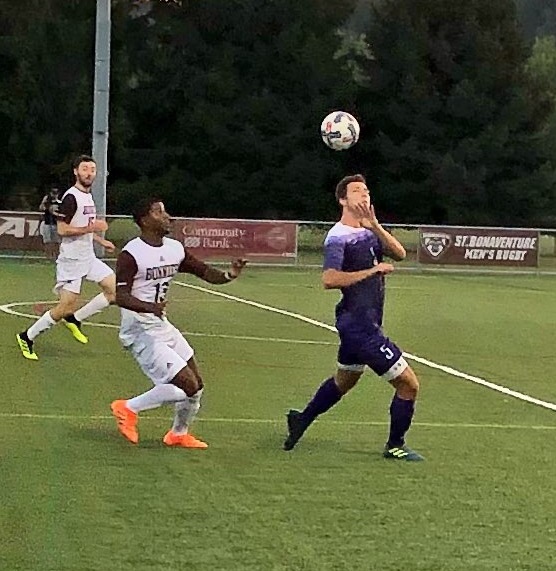 Center back Borna Juracic has been the anchor of the Niagara back four. (Ben Tsujimoto/Buffalo News)

Against the last two - projected in preseason to finish second and third in the conference - Niagara conceded the decisive goal in the 62nd and 66th minutes, respectively, a sign that second-half lapses have been a downfall.

At times, redshirt-senior goalkeeper Steve Casey's heroics have kept Niagara in matches, while stellar defending from seasoned center back Borna Juracic has been key, too.

In previous seasons, Niagara could barely trot out a competent starting lineup. Now, Boyle is more at ease turning to his bench.

The depth showed in Niagara's resilient performance against Fairfield, which came without their captain and starting center midfielder Bautista Pedezert, who was serving a one-game suspension.

Serbian sophomore Danilo Pekovic stepped into the starting XI and held his own; even though the Purple Eagles were out-shot 20-5, the margin of victory was narrow. Throw in regular cameos in meaningful games by Josh Tufino, Andrew Francisco, Luigi Boa Morte and Jacob Myer, and this proves Boyle trusts as many as 16 - if not more - on his roster.

"They've bought in for the most part and are trying to do the right things," the coach remarked on his 2018 squad. "It's different than the last couple years because I think we have depth at every position as well, so if someone does go down - which, knock on wood, we've been healthy and fit - I think the wins will start coming if we keep battling like we're battling."

The Purple Eagles have played 10 of their 12 games on the road (13 of 18 in total), part of the home-and-home agreements with regional foes the staff negotiated before the schedule's release. While the schedule obviously isn't ideal, it's bonded the team together better than past seasons.

But ultimately, results matter in keeping players on-board, in attracting recruits and in maintaining jobs. This is an important final stretch for the Purple Eagles. 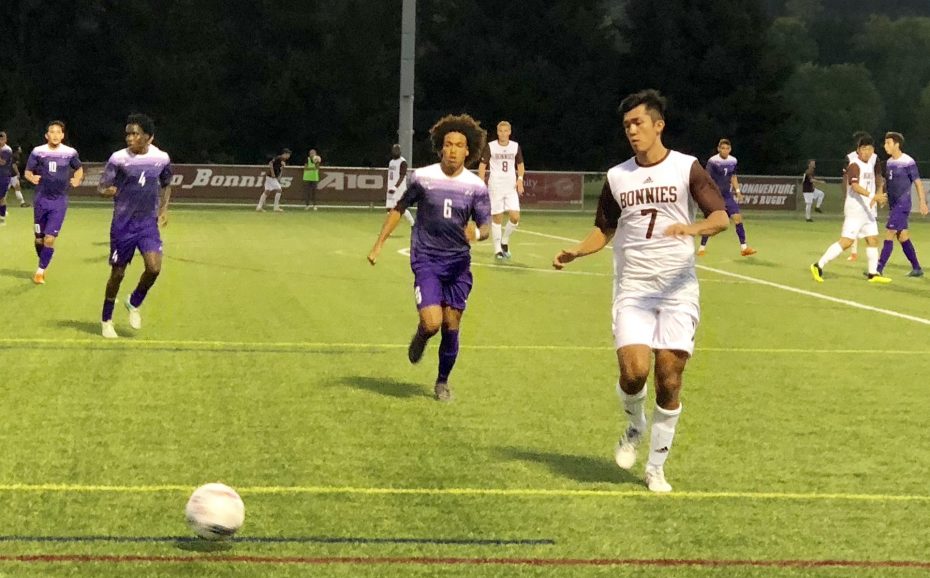 Luigi Boa Morte, No. 6 in purple, has been a valuable reserve for Niagara. (Ben Tsujimoto/Buffalo News)

That Casey and Pedezert have stuck with the program for five and four years, respectively, is admirable. There have been considerably more downs than ups, and it would have been understandable had either player chosen to look for greener pastures after two seasons on campus - like many of their classmates did.

But Casey, the 6-foot-6 keeper from Williamsville South, has blossomed through experience - a ton of experience, whether it's in the MAAC or with FC Buffalo of the National Premier Soccer League. In his 4,671 minutes in goal for Niagara - roughly 52 full matches - Casey has stopped 232 shots and kept nine clean sheets.

Many have been of the highlight-reel variety, like this absurd stop early in the 2018 season.

How did this not go in?! #HowlinHuskies pic.twitter.com/rWlHcownN3

Born in Argentina but raised in Florida, Pedezert has been a minutes eater for Boyle, offering competitive fire and leadership qualities for a team that can't afford to quit when a few losses pile up.

The No. 8 seems primed for a strong conclusion to his career; "Bauti" notched a goal and an assist in the 5-1 stomping of Monmouth, showing improved chemistry with rising sophomore Luca Pacheco, the MAAC Offensive Player of the Week. Given his level of commitment to the Purple Eagle program, Pedezert deserves a few proud memories during this final stretch, even if a postseason spot seems a tall task.

"They're our captains and they've stuck with it," Boyle said of Casey and Pedezert. "They've been great leaders and they've been listening and trying to lead this group of guys.

"It's been hard for them because they've never been here when it's been a winning program. They're trying to feel for themselves what it's like to win and how to get there. You kind of revert back to, when there's adversity in a game, to what you remember in all these years. It's like when you get the swagger on the other side of it, you get the [opposite].

"Those two have been warriors for us - they've kept us in games, they've won games for us. They've done a lot for the program, but they want so badly to see success for themselves. There's also the pressure of that.

Luca Pacheco's special qualities as an attacker were evident as a freshman - the overtime bicycle kick that came inches from beating St. Bonaventure was just a tease of what was to come. The major obstacle? The Burlington, Ont., native didn't have much help around him; Pacheco often wandered on an island up front, with two or three defenders to beat and 40 yards to cover for a chance at goal.

95': Oh, my. Flick up and bicycle kick from NU's Luca Pacheco nearly drops in over Iacobellis. That's special stuff.

In Pacheco's second year, support arrived in the form of freshman forward Dylan Avila and a rejuvenated Mbongeni Tshuma, but the challenge for Boyle was to ensure his gifted sophomore was situated for success - in other words, not sitting too deep, but also not blanketed by a center back.

"We have to get them in better starting positions, in better shape when they receive the ball," Boyle said of Pacheco and Avila. "If they receive with their back to these center backs going backwards with their back to goal, then it's useless ... we're trying to get the shape better to get them wider, spread it a little bit so we can slip into spots. Then we have to get those balls [to them] a little better, an angled ball, not a straight ball."

It hasn't been all roses for Pacheco in his second season: a squandered penalty kick, where the sophomore stopped his approach before striking the ball, changed the game in Niagara's loss to rival St. Bonaventure.

24’: Wow, there’s something you don’t see often. Handball on the Bonnies in the box, penalty for Niagara. But Luca Pacheco stops his run up and sees yellow - PK nullified, didn’t go in anyway. pic.twitter.com/ZjsiWhrHly

Still, Pacheco's 10 points (four goals, two assists) in 12 games make him the first Purple Eagle since Alex Dimitriu in 2015 to reach double figures in points. Armed with the recent conference honors, Pacheco is poised for a strong finish and the potential for even greater heights as an upperclassman.

Who else can score? 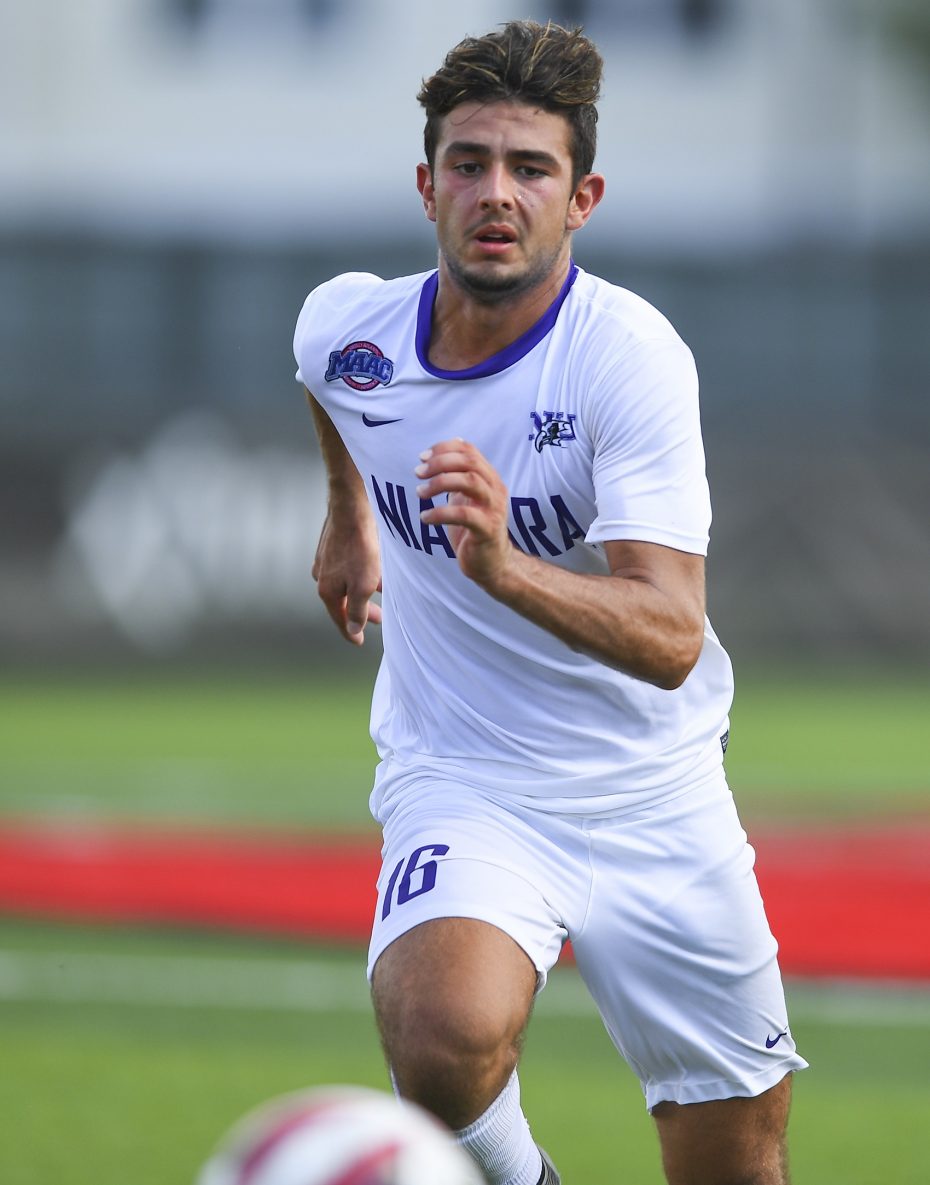 Niagara midfielder-forward Luca Pacheco was named MAAC Offensive Player of the Week after a standout performance against Monmouth. (Via Niagara Athletics)

The Purple Eagles have won every game this year in which they've scored more than one goal. Unfortunately, the side has been blanked five times and limited to one tally in four other matches. They've been out-shot 182-83, a brutal ratio.

While finding a primary scorer was the concern when we first talked to Boyle, after the St. Bonaventure loss, Pacheco's run of form has alleviated some concerns, even if more than a third of the club's goals came in the 5-1 white-washing of Monmouth.

6-foot-6 target forward Callum Willmott, who graduated in 2014, was the last physically imposing striker to don purple and white, and operating without a true No. 9 can be a real pain.

"Everything changes when you have a goalscorer," Boyle said. "We've got some guys who can do it; they're just undersized and have to transition to dealing with tough center backs. Every team has tough, hard center backs, big center backs to get around. Our forwards have to ... figure out how to get around and get behind them - I think we're getting better at it.

"We've created enough chances - we have to believe in the end product - maybe get the shot off a little quicker. There's still this doubt in their mind that I don't think I'm going to score, really, you can kind of feel it.

"They're getting where they need to be - they're doing the hard part - it's just now scoring, and we see that with every forward in the world. They go through times where it's a struggle."

Senior Tshuma has done much of his damage from the penalty spot, while Avila continues to learn how to be a consistent thorn in the side of MAAC defenses. While big forwards don't grow on trees, expect Boyle to aggressively recruit a sizable attacker.

Maybe they're fiery by nature, or maybe losing close games has taken its toll, but regardless, discipline is a problem for this Niagara team.

A Purple Eagle has been sent off in half of the conference games so far, with Luigi Boa Morte and Pedezert receiving marching orders and serving one-game suspensions. Niagara's 23 yellow cards - nearly two per game - is five more than their foes.

Winning in the MAAC is tough enough 11-on-11. Cooler heads will be necessary over the final six games.

"We feel like we can do some damage in our league and if we can get to the playoffs, I don't think people will want to play us." - head coach Bill Boyle.