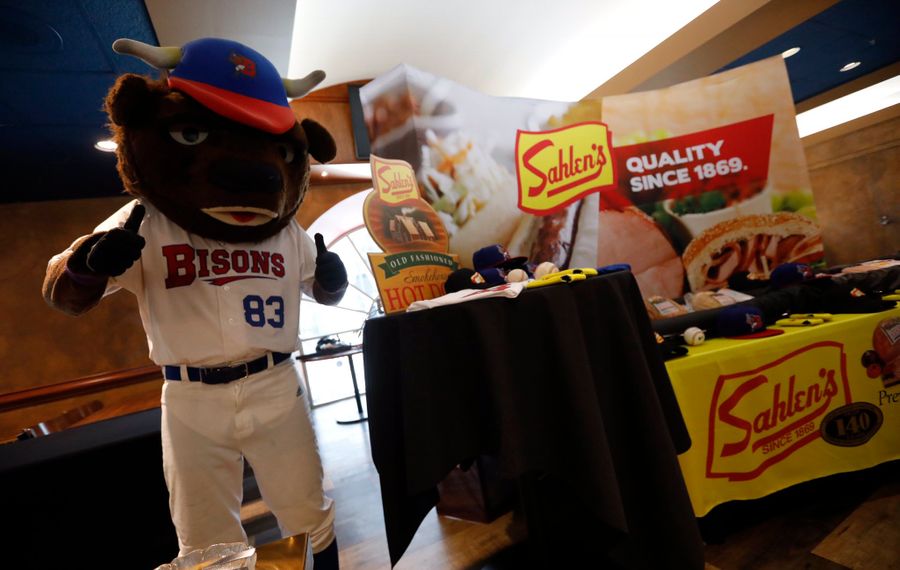 Sahlen’s and the Buffalo Bisons have thrown a new name for the downtown ballpark onto the grill.

The Bisons next season will play in Sahlen Field – note no apostrophe “S” – the stadium’s fifth sponsored name since it opened in 1988.

Team and company officials announced the 10-year naming rights agreement Tuesday afternoon at the stadium, where they touted the ties between Sahlen Packing Co.’s main product and the Bisons.

“Hot dogs and baseball are just a natural fit, they just go together,” said Mike Buczkowski, vice president of Rich Baseball Operations and general manager of the Bisons.

Sahlen’s wasn’t the original provider of hot dogs at the stadium, but it has sold nearly a million of them since becoming the Bisons’ “official hot dog” in 2012, the team said.

The Bisons said they sought a naming rights partner with a deep history in the community that fits well with the team’s family-friendly atmosphere.

Sahlen’s, which recently completed an expansion of its East Side headquarters and production facility, was founded in 1869.

“This is a lot about celebrating our 150 years in business, and reinforcing the Sahlen’s brand, just keeping our logo out there in front of the public,” said Joe Sahlen, the company’s president.

The Bisons announced in March that the Coca-Cola Bottling Co. would not renew its naming rights contract after the 2018 season. The Bisons and the company struck that agreement in 2008.

The stadium opened as Pilot Field. It became North AmeriCare Park in 1995 after the original rights holder, Pilot Air Freight, defaulted on its payments to the city.

The ballpark switched to Dunn Tire Park in spring 1999 after the tire company assumed the final nine years of payments in the contract with North American Health Plans.

The City of Buffalo owns the stadium where the Bisons play but the team manages operations there.

Buffalo Mayor Byron W. Brown said the city does not need to approve the new name per the terms of its contract with the Bisons.

The Bisons’ Buczkowski would not say how many companies sought the new naming rights contract but he said the team quickly came to focus on Sahlen’s. He did say the company was the first to call about the contract.

Frankly, he said, a deal with a family-owned maker of hot dogs was a natural fit for the family-owned Bisons.

Buczkowski used a quote he attributed to Humphrey Bogart: “A hot dog at the ballpark is better than a steak at the Ritz.” (Other online sources say the original quote was “roast beef,” not “steak.”)

“I think if Mr. Bogart spent some time in Buffalo, he’d say a Sahlen’s hot dog is better than a steak at the Ritz,” Buczkowski said.

The team will spend the coming months designing a new logo for Sahlen Field and replacing the Coca-Cola Field signs with those bearing the new moniker.

Coca-Cola retains the pouring rights contract for the ballpark.

Buczkowski declined to reveal the value of the naming rights agreement with Sahlen’s.

“The revenue derived from this specific agreement is critical to the successful operation of the ballpark,” said Jonathan A. Dandes, president of Rich Baseball Operations. 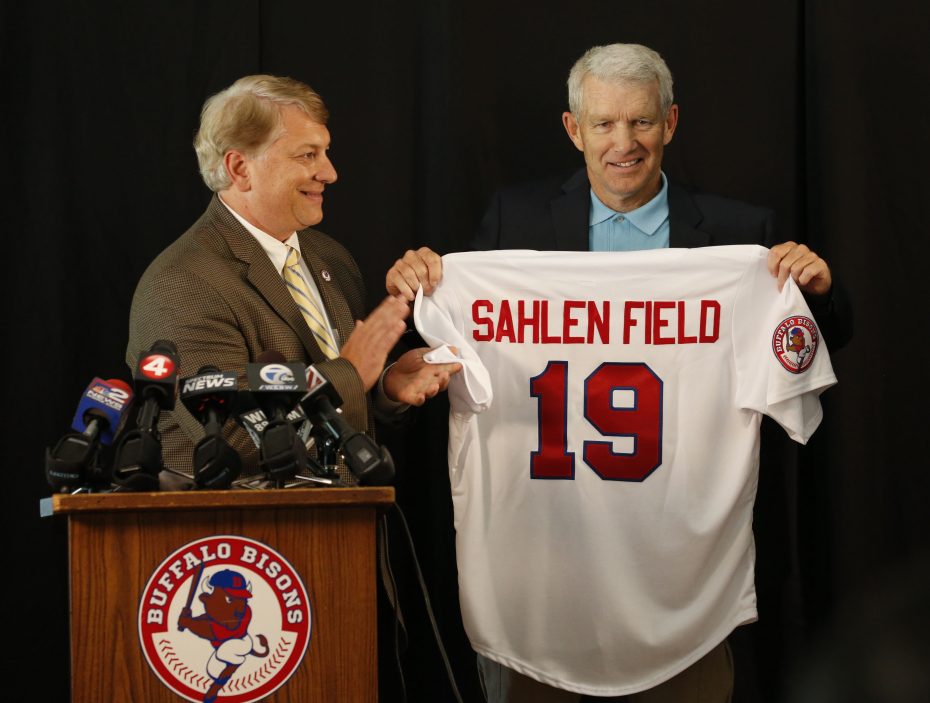 Sahlen’s has previously paid to have its name on a sports complex in Elma and on a soccer stadium in Rochester.

Joe Sahlen said his family is competitive and sports are a natural fit for them and the company.

He said putting Sahlen’s name on the stadium should offer a marketing boost for the company, particularly with the team’s connection to the Toronto Blue Jays and their Canadian fans. Sahlen’s also sells its deli meat at the stadium.

“It was a match made in heaven. That’s why it only took us a couple hours to give them a call when we saw the naming rights end,” said Joseph Sahlen, the company’s executive vice president.

Sahlen’s lost the hot dog contract at the Bills’ New Era Field after the 2017 season, said Joseph Sahlen. It is not the official provider at KeyBank Center, either, he said.

The company has a long legacy in Western New York.

Sahlen Packing Co. is headquartered at 318 Howard St. on Buffalo's East Side. It was established in 1869 by a previous Joseph Sahlen, and remains in the family today with the fifth generation.

In addition to hot dogs, Sahlen's makes holiday hams, sausages and deli meats. Its products are sold in more than 15 states.

In 2016, Sahlen's expanded its hot dog distribution to Florida, catering to Buffalo transplants longing for their hometown favorite. The built-in demand led to contracts with supermarket chain Publix, which has 1,100 stores in several states.

The company had already followed Buffalonians to Charlotte, N.C., in 2015, where it created a partnership with the Harris Teeter grocery chain.

To keep up with the new orders, the company recently completed an expansion at its manufacturing facilities, buying and adding onto a vacant 17,500-square-foot building around the corner from its Howard Street facility at 17 Montgomery St.

The new facility is refrigerated and has a large specialized packaging and pasteurization machine for added food safety. Sahlen’s has around 90 employees in Buffalo.