Curiosity got the better of Molly Brand on a Monday afternoon in April as her sister got home from school.

Molly, then 15 months old, and her brother, Bennett, 3, played in the living room as Evelyn, 7, arrived. Hogan, the family Yorkie, scurried around them. Molly’s mom, Tricia, greeted her oldest daughter as she chatted with her father-in-law.

Amid the bustle, Molly spotted a mug atop a counter.

“Seconds seemed like hours," her mother recalled. "I saw her reaching for the water. I reached her, but I wasn't fast enough."

Hot water washed over Molly’s left side as the mug tumbled to the floor.

A similar scene plays out in the region about once a day – but the aftermath has changed for most of the children who are burned, thanks to a new amniotic cell treatment that works faster and more efficiently than traditional skin grafting.

Bass, also a clinical associate professor in the University at Buffalo Department of Surgery at the Jacobs School of Medicine and Biomedical Sciences, has written five peer-reviewed medical papers about how to use the cell therapy on child burns. She will present findings from her growing body of results in November at the International Pediatric Wound Care Society Conference overseas in Rome.

The approach she uses remains novel across the United States.

Moms who have just given birth donate their placenta and amniotic sac, which harbor the key tissue for the treatment. Medical companies harvest, clean and dry it. Bass and her trauma team later place thin pieces on a burn wound.

“The beauty of that is that you're using a biologic tissue that creates an environment on the wound that tells the body to turn on all of its own machinery to regenerate new skin,” Bass said.

To be sure, the road to recovery continues after traumatic burn wounds are treated this way, but the Brand family is among those that have gone through the process and are thankful for the results.

"She's active again now and doing great,” Tricia Brand said of her youngest daughter. “Her strength has inspired us." 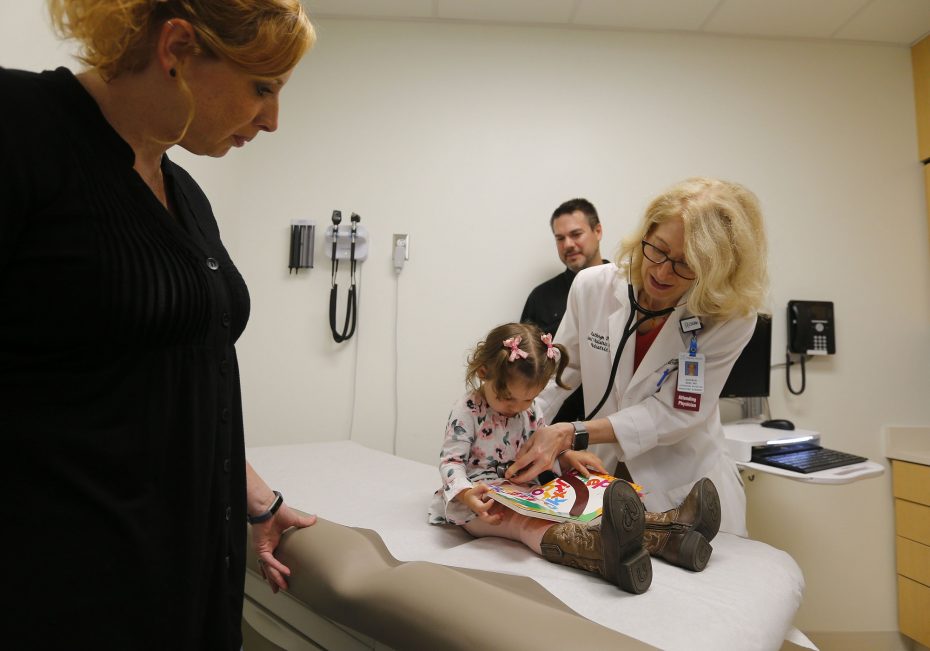 Molly Brand toddled around one of the examination rooms at the Conventus medical office building, next door to Children’s Hospital, recently as her mother, and father David, kept her company before her latest checkup.

"You look at her and can't tell she was burned,” the trauma doctor said. “It's a phenomenal result."

It was a far cry from what Molly looked like on April 16, after she suffered second-degree deep and partial burns over about 12 percent of her body.

First-degree burns, the mildest, impact the thin layer at the top of the skin, called the epidermis. Second-degree – or partial-thickness – burns cause redness, swelling and blistering of the epidermis, as well as the dermis, the thicker layer below. Third-degree, full-thickness burns damage both layers of skin, as well as muscle and other tissue beneath them.

Molly didn't have a full-thickness burn, but even a deep partial thickness burn can cause severe pain, scarring and disfigurement.

Her mother reacted quickly to her daughter’s injury. She pulled Molly back as the mug of hot water came down in the kitchen. She took off Molly’s clothes, ran her daughter’s burns under cool water, and asked her father-in-law to call 911.

"It was terrifying,” Tricia Brand said.

The water scalded parts of Molly’s left chest, arm and abdomen. Her left nipple wasn’t visible by the time she arrived at Children’s Hospital.

The family has learned a lot during the process. "You don't realize how common this is and how fast it can happen," Tricia Brand said.

Children’s Hospital treated nearly 400 burns in 2016 and continues to handle an average of about one child a day. Most children are burned badly enough to need treatment to try to prevent scarring, skin tightness and other lasting damage.

It's common for children to pull a hot liquid or food over themselves from the kitchen stove, counter or tabletop. "Usually it's one side down the face, arm, chest, abdomen,” Bass said. “We see a couple of these cases a week."

Another common burn is a child scalded in a hot bath because the hot water heater temperature in a home or apartment is set too high.

Then and now: At left is what a deep thermal contact burn wound looked like when a 15-month-old boy arrived at Children’s Hospital after falling hands-first into a campfire. At right is what the hand looked like three weeks later, after amnion cell tissue grafting. (Photos courtesy of Oishei Children's Hospital)

Molly’s treatment was the new Children’s Hospital norm. Bass and her trauma team trimmed away dead and decaying tissue – a process called debridement – cleaned and medicated Molly’s wounds, and bandaged them with gauze.

A day later, during a two-hour procedure that took place under sedation, Bass did a second debridement, placed the amnion cell tissue on Molly’s wounds and bandaged them.

There was no need to worry about rejection because of the donor process, the doctor said.

The new tissue almost immediately decreases inflammation at the burn site. It also requires fewer changes in dressings on the wound.

Two years ago, a skin graft would have occurred. Bass would have shaved a layer of skin from another part of Molly’s body and used it to patch the burned regions. Then she would have had two wounds.

"You have to sustain an injury to heal an injury,” Bass said, and daily dressing changes magnify the pain.

Skin grafting continues at burn treatment centers across the U.S. for most who suffer burn wounds. This includes almost everyone who suffers full-thickness burns – the most serious kind – although “biologic agents” with names the likes of ACell, Biobrain and the Skin Gun increasingly have been used.

“In children, those can do a lot of things very well. Adults are different. We haven't seen the same results,” said Dr. Jim Lukan, director of vascular services at Erie County Medical Center and one of two burn surgeons in its Roger W. Seibel, MD, Burn Treatment Center.

Children, especially the youngest, are much smaller, too. A 20 percent burn on an adult covers much more surface area than the same percentage burn on a child, Lukan said.

In general, Lukan said, biologic agents so far haven’t proven that effective in most full-thickness burns.

"What we all want to see is the day when we can make skin in the lab and put that skin on a patient and avoid skin grafting,” Lukan said. “That day does not exist. These are all things that are working toward that."

Children in the region who suffer severe and more widespread burns continue to be transferred to pediatric burn centers in Boston and Cincinnati. Doctors in those centers have kept tabs on what Bass and her staff are doing with other burns in the Oishei Children’s Hospital Wound Care Center, where Bass and her team continue to build evidence on efficacy.

“We're getting great results” with amnion tissue supplied by the MiMedx pharmaceutical company, Bass said, particularly with children who suffer burns to the face, chest and connective tissues.

Chest burns can devastate a young girl, the doctor said, while burns to the hand can involve so much scarring, on so many moving parts, that function can become limited.

Amnion cell treatments don’t in all cases remove scarring completely, “but in many cases it does," Bass said.

Other potential applications for such biologic therapies also intrigue Bass, whose hospital and trauma department handle far more than burn cases. She envisions a day when stem cells can help form intestinal, skin and other soft tissues to address wounds, disease and congenital anomalies.

For burn treatment alone, she said, "it's a huge paradigm shift in how we care for patients." 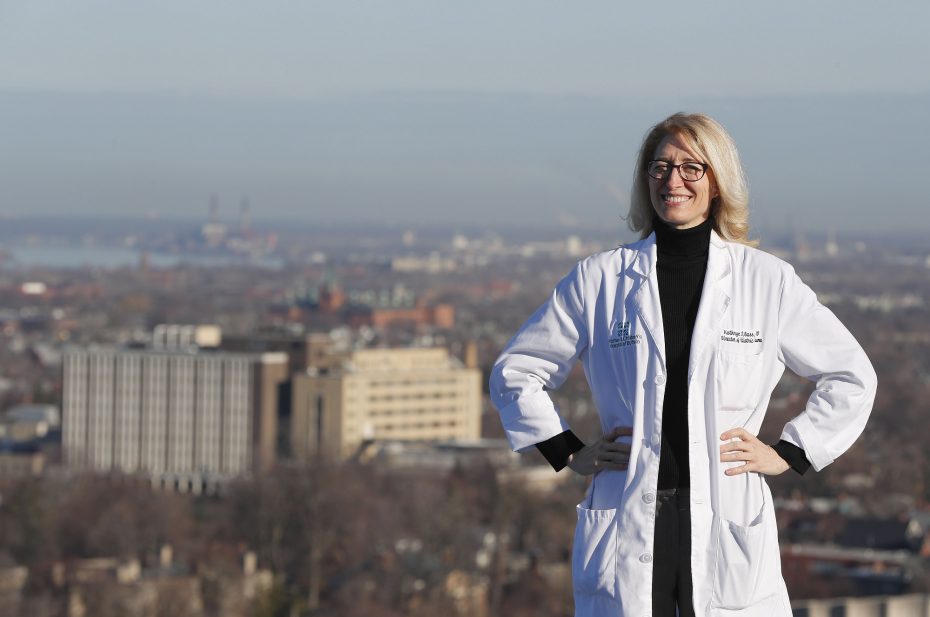 David and Tricia Brand – both nurses at Roswell Park Comprehensive Cancer Center – hadn’t heard of amnion cell treatment when their daughter was injured. As Bass and other trauma team members told them about it, the procedure sounded too good to be true.

"The not knowing what happens next was challenging," David Brand said. "The only comfort for us was having someone explain what was going to happen."

Tricia Brand called the treatment "amazing" and noted that Molly's recovery time was cut in half.

Insurance covers the protocol, which is more costly than skin grafting, Bass said. This can require a "decision analysis" – that often starts with concerns about the immediate costs instead of the long-term benefits and savings.

Molly Brand’s injuries are a case in point. Young girls with chest burns often face the prospect of reconstructive breast surgery as teens. Molly already has healed to the point that she won't need that.

"I honestly thought we were going to have a future of plastic surgery over and over again," her mother said. That not only would have come with the physical challenges, but with Molly having to relive a traumatic part of her life.

The Children’s Hospital Wound Care Team, along with the Visiting Nurses Association of Western New York, helped the Brand family through the early weeks of treatment.

"In the beginning, after this happened, Molly got very quiet anytime someone walked in the room,” her mother said. “You could tell it affected her. Now, she comes in and she laughs and is happy. I think the trauma, too, was decreased because of the treatment."

Tricia Brand said she remains an overprotective parent but one who better understands that parents can’t always anticipate every outcome. She and her husband shared the family story to give others hope should they find themselves in a similar place.

"It's been a long process," she said. "It focused on Molly but our other two children were there and witnessed this. The whole family had to heal, and we still are."

As Molly continues to recover, her clothes cover more of her skin. She always wears sunscreen. She spends much less time in the sun.

“We make sure her skin is protected and moist," her mother said.

Molly still has a slightly elevated bump on the crook of her left arm, “but her wrist looks fantastic," Tricia Brand said. Some discoloration remains around her belly, especially when she's hot or taking a bath but "it's new skin. I'm watching the skin before my eyes maturing and developing. Her nipple looks great. She's not going to need surgery.

"She might only know the story I tell her. That's a good thing."

Take the following steps to keep your child safe from potential burns in or around your home.