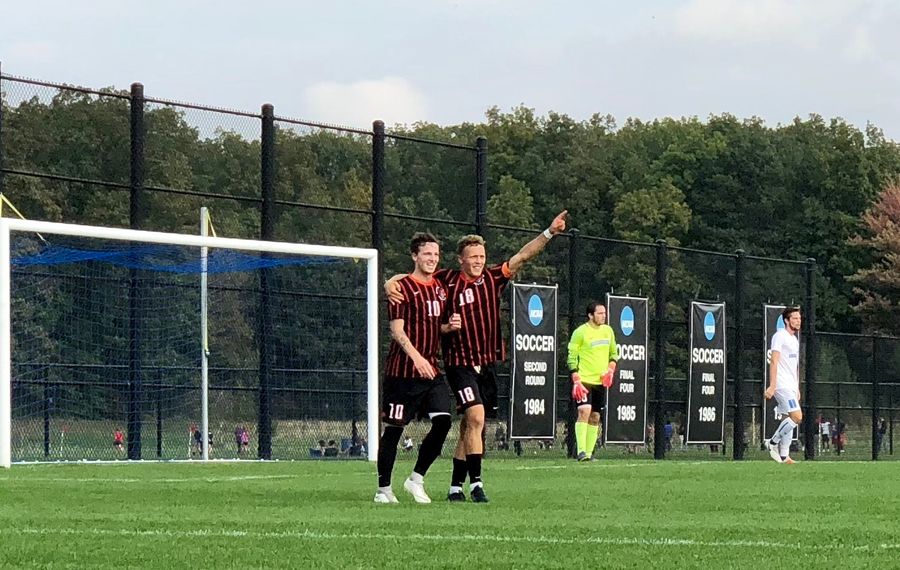 Theo Pencic thought his season had ended early - and abruptly. Late in the final non-conference tilt against the University of Rochester before the dawn of SUNYAC play, the Norwegian freshman striker - tied for the team-lead in goals at the time - suffered a broken toe.

Beating a monthlong recovery timetable by a week, Pencic returned to the pitch in Saturday's Battle by the Lake and made the difference, potting a hat-trick in Buffalo State's 4-0 win over Fredonia.

"It means everything," Pencic responded when asked about producing upon his return. "After the first goal I felt just like a relief, [because] I missed four games. So it's nice to continue scoring - I think I have seven goals now - so I just want to keep it going."

In the four SUNYAC games without Pencic, Francesco Cardillo's Bengals failed to score more than one goal in each - winding up with an 1-2-1 record to begin conference play. While Pencic's finishing was the most noticeable difference, Cardillo explained how the forward's presence had ripple effects.

[Related: 5 things to know about Fredonia men's soccer for 2018]

"[It's a] massive addition for Theo to come back," the first-year head coach remarked. "He gives us so much up top - it's not even his finishing, it's his knowledge of the game, his understanding, his runs off the ball - all of that stuff just opens so much for everyone on the team, then that brings everyone up, everyone together and now the confidence is flowing now." 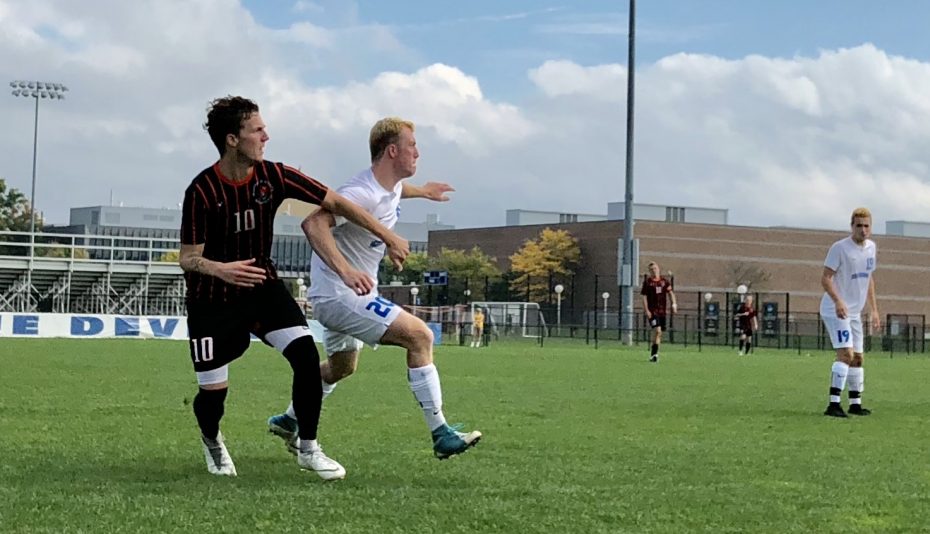 The win - Buffalo State's first against Fredonia since Oct. 3, 2015 - raises the Bengals' record to 2-2-1 in SUNYAC and has them tied for sixth place (the final playoff spot), with Mark Howlett's Geneseo team.

"It doesn't matter where [these two] programs are, this is a fight every single time - last year, this year, any year - it's always a fight with Fredonia," Cardillo said of the fierce rivalry. "It's always a good game and it's very enjoyable."

*1-0, Buffalo State, 29': The first quarter of the match was frustrating for the Bengals' Ali Shawish, matched up against the taller, athletic Fredonia freshman, Robert Aboagye.

After finishing second in a few one-vs.-one battles and slipping a few times on the grass, Shawish shook off the slow start and hesitated in his dribble after a few cuts - freezing Aboagye - then slipped a low pass into Pencic's near-post diagonal run. From a bad angle, Pencic placed his left-footed shot into the side netting of Ty Bentham's goal. 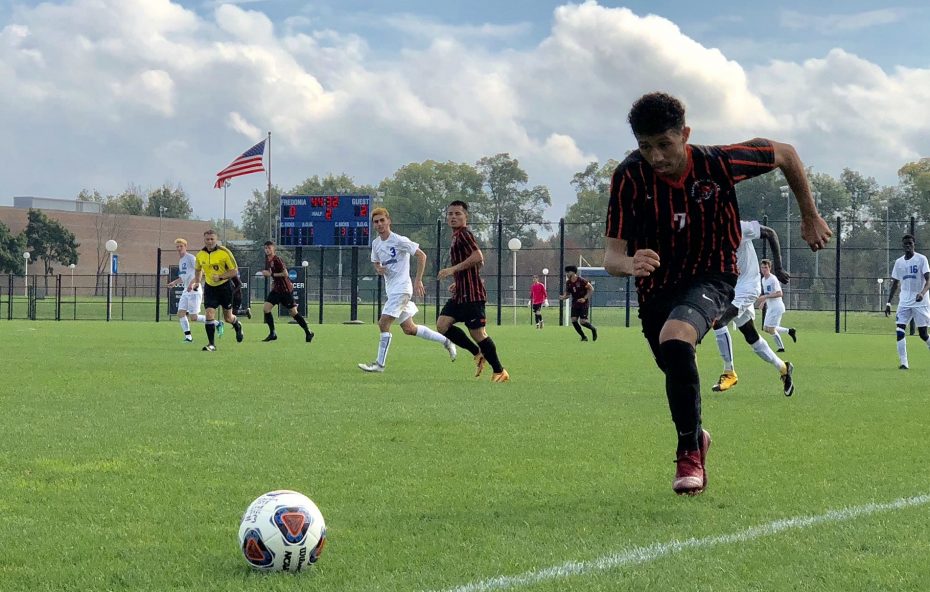 Ali Shawish explodes down the left side for Buffalo State against Fredonia. (Ben Tsujimoto/Buffalo News)

*2-0, Buffalo State, 40': The Bengals' second goal, just before the intermission, was arguably the biggest of the match. Joining the attack from right back, Colin O'Keefe's cross lofted just over the head of Fredonia's Andrew McDonagh onto the chest of Pencic, who calmly did the rest.

"We were practicing that the whole week," Pencic explained. "[Fredonia] had five in the back, so we wanted to go wide and put in a lot of crosses."

*3-0, Buffalo State, 59': Freshman Trevor Moreland, the outside back opposite O'Keefe, created the third goal. Pencic's off-the-ball run at the heart of the Blue Devil back line was picked out by the Newfane High School alum, and the Norwegian volleyed past Bentham nonchalantly with the outside of his foot.

*4-0, Buffalo State, 81': You'll find Buffalo State's fourth goal on highlight reels across the land, as holding midfielder Nemanja Simic took a stride past a Fredonia midfielder and pasted a shot from 25 yards away that found the left upper-90. A wunderstrike from the sophomore, who put in yeoman's work the rest of the afternoon.

Fredonia head coach P.J. Gondek understands his team's calling card is defense, and against a team with the pace and attacking options of Buffalo State, his decision to deploy five defenders - McDonagh, Jackson Retzer and Kevin Loftus at center back, Aboagye and Sam Wagner on the flanks - seemed a wise move to protect the home field.

Had Blue Devils freshman Cole Teelin capitalized on a Buffalo State defensive breakdown - and a penetrating pass out of the back by Retzer - in the game's first few minutes, then perhaps the game's script would have changed. But Teelin's poke by Bengals' goalkeeper Andy Queen wasn't on frame - and even though the Fredonia attacker beat Queen to the ensuing loose ball, the big keeper was able to deflect the second shot out of play.

"It just seems to be a theme for our guys - for the first five, 10 minutes of every half it takes them to get in - as much as I say it, they just don't understand it that you need to be focused at the start of the game as well," Cardillo said of the troubling first portion of the match.

Buffalo State's best bet of breaking down the crowded Fredonia defense was, as Pencic said, serving dangerous, driven crosses in from the wings. While O'Keefe, Moreland and Shawish passed up a few good opportunities for service in the first 25 minutes - much to Cardillo's chagrin - the first three goals eventually came off assists from the wings.

"Some long balls, some short, keep a good pace on the ball to try to move them - they were very tight," Pencic said of his team's approach. "The last couple games were kind of hard - so I feel like we're back at it now."

"[Once we switched on], the organization defensively and the leadership of our guys ... the communication was massive today and that helped us defensively to make sure we didn't concede," Cardillo added.

*The lopsided score meant the heat of the rivalry - the fierce tackles, bickering among players and late-game tempers - were not really factors. A vicious tackle by Retzer on Buffalo State's August Finn earned the Williamsville North grad a yellow card and a seat on Gondek's bench, while a brief spat between Fredonia's Kevin Loftus and Pencic amounted to nothing.

*Buffalo State's Ramazani Juma remained out of the lineup after his red-card incident against Brockport two games ago. Pa Lu returned to action against his former teammates - the International Prep alum played for Gondek in 2017 - after missing several matches to injury. Lu saw roughly 35 minutes off the bench.

*With thunderstorms in the forecast earlier in the day, any rain or inclement weather held off for the duration of the game. Temperatures were in the 70s, which made for an awkwardly hot afternoon.