I first met Marcus Mariota in the Titans’ locker room after his first preseason game in Nashville, only months after he was drafted second overall in 2015, and as the team’s beat reporter spent the next three years chronicling his NFL career for The Tennessean.

It’s a run that included a last-place finish his rookie season, when the Titans tied the Browns for the worst record in the league, and a playoff victory in the wild-card round last season in Kansas City.

Mariota was raw then, like Josh Allen is now. But today, a quarter of the way through his fourth season, the Titans (3-1) are tied for first place in the AFC South, are tied for the second-best record in the conference and are feeling pretty good about themselves after defeating the reigning Super Bowl champion Philadelphia Eagles last weekend in overtime.

Mariota’s record this season doesn’t mirror his team’s. Blaine Gabbert started two of those victories, including a win at Jacksonville (when he was concussed and replaced by Mariota, who is dealing with a nerve issue in his throwing arm). But having a solid backup quarterback in place speaks to a larger point about how to build a winning team.

And here’s where the Titans’ reinvention over the last few years is instructional for the Bills and their fans, as Allen, their own first-round rookie quarterback, prepares to make his fourth career start:

Mariota, as a rookie, had no dependable wide receivers, no running game to speak of and an offensive line that allowed the most sacks in the league. 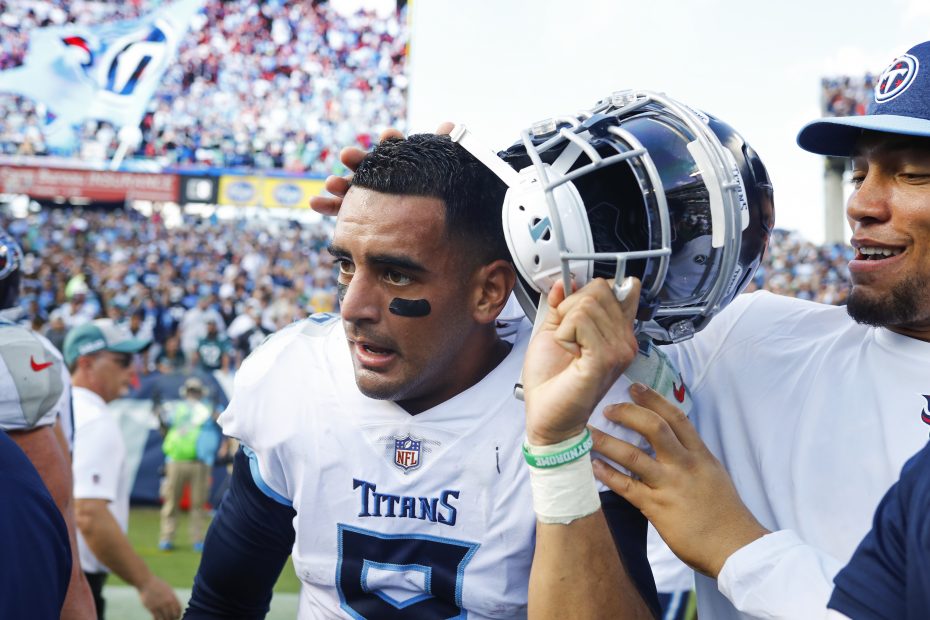 Titans' quarterback Marcus Mariota is congratulated as he removes his helmet after defeating the Philadelphia Eagles 26-23 in overtime at Nissan Stadium on September 30, 2018 in Nashville, Tennessee. (Photo by Wesley Hitt/Getty Images)

NFL draft preview: OTs will be there for taking in first round

Josh Allen gets creative in offseason work, focusing on deep ball
NFL draft preview: Good year for Bills to have no TE need

Three years later, the offense Mariota will lead against the Bills on Sunday at New Era Field includes only two teammates from his rookie season: left tackle Taylor Lewan, who at the time had yet to establish himself as a perennial Pro Bowler, and left guard Quinton Spain, then an undrafted rookie free agent who worked his way into the starting lineup midway through the season.

It took time for the Titans to put the pieces in place, beginning with a new head coach and general manager.

For the sake of this exercise, let’s say the Bills’ front office structure is sound, with coach Sean McDermott and GM Brandon Beane both signed through the 2021 season.

What changes need to happen on the field to ensure that Allen remains healthy and has the greatest opportunity to develop into the franchise quarterback the Bills believe him to be?

The most critical thing is to keep him on the field.

Mariota missed four games his rookie season because of injuries, always a concern with a mobile QB. He had to learn to protect himself and the football, which included understanding when to throw the ball away. (And not, say, hurdling a guy or throwing across his body on the run into the middle of the field.)

Former Bills coach Mike Mularkey had a mandate from Titans ownership when he took over as Tennessee’s interim coach midway through Mariota’s rookie season:

Protect the franchise quarterback, the team’s most valuable asset.

This was accomplished in two ways.

First, the Titans set out to solidify the offensive line. Mularkey juggled three starters before his first game as coach.

Those three newcomers, along with Lewan and Spain, have developed into the cohesive unit that will start for the Titans here on Sunday.

Lesson: When McDermott talks about culture being more important than scheme, that’s a team-building philosophy, and that physical mindset begins by dominating the line of scrimmage. McDermott has already tried switching centers, looking for the best available line combination.

Second, and along with addressing the line, the Titans knew they needed to establish a running game.

The following offseason, the Titans acquired veteran DeMarco Murray for next to nothing in a trade with the Eagles and committed to the run. Murray led the AFC in rushing yards in 2016.

Tennessee also drafted bruising former Alabama running back Derrick Henry, who will start here on Sunday, and has since complemented him with former Patriots running back Dion Lewis, who not only offers a change of pace but a substantial receiving threat out of the backfield.

Lesson: If LeSean McCoy isn’t getting the job done – and at this point, he hasn’t really been afforded the opportunity to get going – then find someone who does. But commit to running the ball. The Titans feature one of the most balanced attacks in the league this season, passing on only 52 percent of their plays.

Significant upgrades at wide receiver came a bit later. Yes, the Titans signed Rishard Matthews in free agency before Mariota’s second season (and bid adieu to second-round pick Dorial Green-Beckham, trading him for a backup offensive tackle). But it wasn’t until the quarterback’s third season when Tennessee really began to address the perimeter.

Robinson moved on from the inconsistent Kendall Wright and used three of his first four draft picks on pass catchers, including selecting Corey Davis with the fifth overall pick.

Davis had a breakout performance last weekend, catching nine passes for 161 yards and the game-winning touchdown against the Eagles. It was his first career regular-season score.

Lesson: Upgrading receiving talent is less important than controlling the line of scrimmage and protecting the quarterback. That comes later, once the fundamentals are in place. If Allen doesn’t have time to read a defense, his receivers matter little.

The Titans’ reinvention, on offense, began with a young franchise quarterback and worked from the inside out.

It has not been a quick fix. They’re not yet where they want to be. And after all that, the jury is still out on whether Mariota will blossom into one of the league’s true superstars.

The Titans won a playoff game last season, and Robinson still replaced Mularkey and the bulk of his coaching staff because the GM believed they weren’t getting the most out of the players.

Mariota served as Exhibit A after throwing more interceptions than touchdowns during the regular season.

The Titans have been aggressive in trying to give Mariota every opportunity to grow and succeed.

The Bills are committed to Allen, who said he spent some time training with Mariota before the draft. That’s truly Step One.

Nothing is more important than identifying a franchise quarterback and having that player in place. But then the task becomes building an offense around him and creating an environment where his game can develop and flourish.

Studying the Titans’ plan offers a blueprint for how to put a quarterback in position to succeed, but no guarantees that he will.

In Allen, the Bills might not know what they have for a while.

And by the time they do, his supporting cast could and should be radically different.