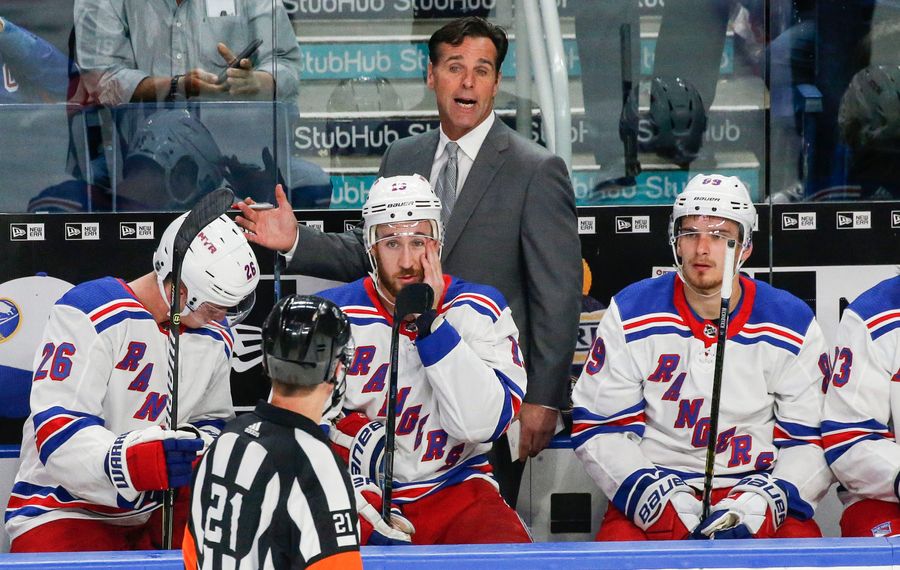 Coaching his second NHL game was David Quinn — who was in charge at Boston University in the 2014-15 season. That was Eichel's lone season in college hockey and the year he partnered with Rodrigues and Rochester Amerks forward Danny O'Regan on a team that went all the way to the Frozen Four championship game.

"It's awesome seeing him getting this opportunity but he's not getting his first win tonight," a smiling Eichel said before the game. "He's a friend to me, a mentor and he's been pretty close to me even through my first few years in the NHL. He was so good to me at BU and we have such a good relationship but I think we're all competitors, right? When you get out there, all you're doing is trying to help your team win."

"He was very real with you and honest," said Rodrigues. "He told you when you needed to improve but he also let you know when you were doing things right. He let us play the game, he let us make mistakes. When you're that age, you have to learn from those mistakes but you have to make them to improve."

Quinn lost his NHL debut, 3-2, Thursday to Nashville. He admitted he knew this situation was looming when he looked at the Rangers' schedule.

"It will be a little different, I'm not going to lie," Quinn said of coaching against Eichel before the game. "It will definitely be different. He's a guy that away from the rink continues to grow up. He's 21 years old. I knew eventually he would be named captain of the Sabres. I just wasn't sure when it was going to be. He's a guy that plays with passion. He's got a great personality and great presence about him."

Quinn, 52, posted a 105-68-21 record in five years at Boston University after serving as an assistant coach for the Colorado Avalanche and the head coach of the AHL's Lake Erie Monsters in Cleveland. He made sure things didn't get out of hand around Eichel during the star's lone college season, as the Terriers got far more attention than the average college hockey team because of all the hype surrounding the draft.

"A big thing for him was making sure 'Eichs' was level-headed and just worried about playing hockey and not everything surrounding him," Rodrigues said. "You don't see many college kids getting that type of attention but it was kind of cool for our locker room. We all fed off that a little bit. We obviously had a great year that year and it was a cool experience."

Mike Harrington: It's still about how far Jack Eichel can take Sabres

After Eichel was drafted No. 2 overall in 2015, he played it coy about whether he would stay another year at BU or sign with the Sabres and turn pro. As anyone would surmise, the decision had long been made. When Eichel returned from the World Championships in the Czech Republic to meet with Quinn, the coach said he asked Eichel why he would return to college.

"My concern with him coming back was he wasn't going to have the same level of respect for college hockey that would allow him to improve," Quinn said. "It was time for him to go for sure. Not that he needed me to tell him that. I think he was leaving anyway but I would have driven him to Buffalo because it was time for him to go."

"He cares about you a lot as a hockey player but I think he cares more about you as a person, and as players you appreciate that," Eichel said. "I think that's sort of what we took from him. He was really good at that."

Sabres forward Vladimir Sobotka sat out Saturday's game with an upper-body injury suffered in the opener against Boston and that required a reshuffling of the team's lines.

With Sobotka out, Casey Mittelstadt centered Zemgus Girgensons and Tage Thompson on the third line and the fourth line had Rodrigues centering Jason Pominville and newcomer Remi Elie, who was making his Buffalo debut.

There are several connections with the Sabres in the Rangers organization. Quinn retained longtime former Sabres head coach Lindy Ruff on his staff as an assistant; Ruff coached last year under Alain Vigneault.

New assistant Greg Brown, who came from Boston College, was selected by the Sabres in the second round of the 1986 draft and played 49 games with the club over parts of two seasons in the early 90s. The assistant general managers are former Sabres captains Jim Schoenfeld and Chris Drury. Schoenfeld is also the team's senior vice president while Drury is the GM of the AHL's Hartford Wolf Pack.

The Wolf Pack's captain is former Sabre, St. Joe's product and Williamsville native Cole Schneider. He had 16 goals and 50 points for the Wolf Pack last season.

Rangers goalie Henrik Lundqvist entered the game with 431 career wins, eighth on the NHL's all-time list, and is the only goalie in league history with 20-plus wins in 13 consecutive seasons. He entered the game six wins shy of tying Hall of Famer Jacques Plante for seventh on the win list. He needs to get to 455 to move into the top five.