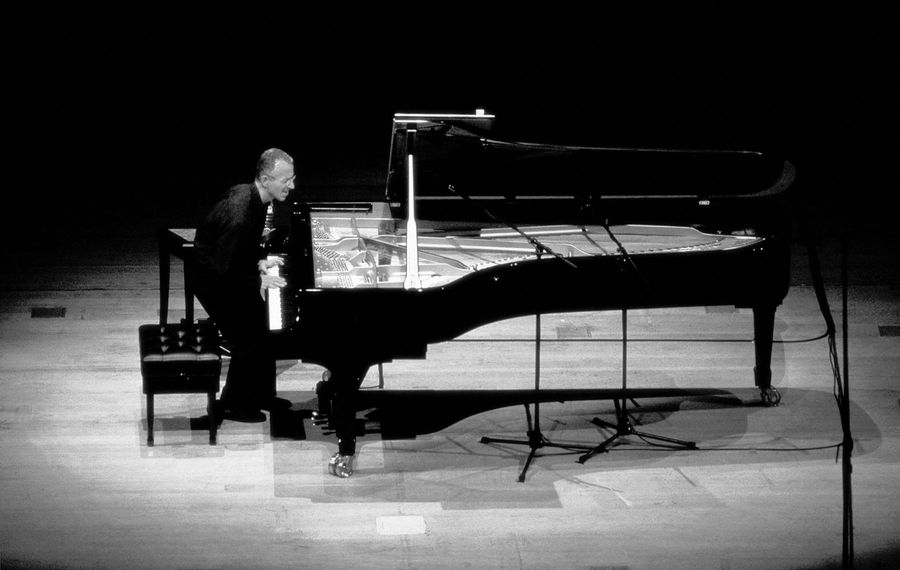 The music playing on the fellow's boom box came from Keith Jarrett's "The Koln Concert." I didn't recognize it 15 seconds after entering his shop. The two-record set hadn't yet become the best-selling solo record in jazz history and the all-time best-selling piano record (3.5 million records). It wasn't yet one of those rare jazz records - like Miles Davis' "Kind of Blue" and John Coltrane's "A Love Supreme" - that was almost universally known outside the jazz world.

So I asked the fellow what it was. "The Koln Concert" was all he said. He didn't need to specify the pianist. The two-record set had already conquered the world, though not in the record-setting way it would.

It was a very canny choice of background music for a Venetian glass blower who hoped to trap as many free-spending tourists as possible while the seasoned travelers were somewhere else. My daughter and I were in his shop because, quite frankly, neither one of us had ever before seen an actual glass blower in the process of making bottles and figurines while we watched. It was fun to watch for three or four minutes (with Jarrett accompaniment).

I've always thought that despite its origins as a January 1975 solo piano concert in Koln, Germany, it was the most commercially calculated marathon soliloquy Jarrett ever gave--the one with the fewest off-putting dissonances and lucubrations and the most gospel ostinatos and folksy pastoral pleasantries.

It wasn't the same kind of wildly variegated solo piano journey as Jarrett's three-record set of 1973 concerts in Breman and Lausanne, not to mention the gargantuan 10-record "Sun Bear Concerts" from Tokyo. That "Koln Concert" was as user friendly as jazz piano ever got. As Jarrett later groused, it was all too easy to be consigned to background music -- for dinner, homework, whatever. ("Mom, could you please pass the corn?")

Forty-three years later, there is a new two-disc set of solo piano improvised fantasy from Keith Jarrett. It's called "La Fenice" (the Phoenix) and it was recorded in the Gran Teatro Le Fenice in Venice on July 19, 2006.

Jarrett, in his early 70s now, has long passed his era of commercial calculation. Of course, there are those pseudo-gospel ostinatos and countrified hymnodic numbers that made him famous. But it begins with some of the most dissonant and difficult music he's ever recorded in one of his solo piano filibusters.

It begins as an eight-part suite but before it's over turns into the usual, wildly eclectic Jarrett trek from blues to atonality to "Stella By Starlight," "My Wild Irish Rose" and Gilbert and Sullivan in passing. Its opening gnarled high-energy virtuosity gives way to a finale more reminiscent of "The Melody At Night With You," his chronic fatigue syndrome record.

Venetian glass-blowers won't be hooking free-spending tourists by playing this music in their shops. But they might be secretly and chauvinistically pleased by listening to it when they get home after a hard day of glass-blowing. ★ ★ ★ (out of 4)

It should be always remembered that it was Chick Corea, not Jarrett, who first recorded a solo piano recital for ECM. But it was Jarrett whose extroverted fantasias transformed Bill Evans, owed nothing to Earl Hines and Art Tatum and who influenced everyone who came after.

Most recently that means Kenny Werner, whose solo piano disc "The Space" he says, is from a place where music is "in the moment, content with what is...From the space we make decisions without doubt. We celebrate mistakes. I'm still learning how to be that free and detached in life." Far be it from me to deny a fine musician his spiritual education but what Jarrett does on "La Fenice" is far more captivating. ★ ★ ½ (out of 4)

As long as we're on the subject of musicians better off private than public, Bob Seger's relic "The Last Heard: Heavy Music" presents the hugely popular future Buffalo visitor (so popular he could sell out three straight nights in The Aud) with a 1966-67 band called The Last Heard. It's of historical interest, certainly, but I doubt whether Seger, at his most nostalgic, will ever listen to it again after the first time. ★ ★ (out of 4)

Much more fun among rock titans looking backward is ZZ Top's guitar wizard Billy F. Gibbons taking a break from his monster-touring Texas boys on "The Big Bad Blues" so that we'll all remember that before all those syncromech boogie-down hits, he started playing sweaty bar blues from Muddy Waters and Bo Diddley and his own contributions to the tradition. ★ ★ ★ (out of 4)

The most fun of all, for some of us, as well as the most shameful record is RCA's latest violation of Elvis' recorded output which is called "Where No One Stands Alone." This particular dive into Elvis-hood is a crass but  canny one - pure gospel music which, as daughter Lisa Marie reminds us, was Daddy's favorite music.

I'm sure there will, no doubt, be many horrified that he was re-recorded with new arrangements and background singers in these tracks but as desecrations of a holy pop demigod go, this is pretty enjoyable. And Lisa Marie certainly isn't the first family heir to besmirch the life work of a legendary parent. This time it actually sounds as if it was done with love. ★ ★ ★ ½ (out of 4)

Most spectacular of all recent recordings I've heard in months is a recent classic two-disc set of Shostakovich Symphonies performed by the Boston Symphony Orchestra conducted by its leader Andris Nelsons, the Latvian conductor who was born three years after Jarrett's "Koln Concert" was first recorded.

In  the last three decades, Shostakovich has emerged as one of the most recorded of all the great modernist masters which means that there are so many recent Shostakovich recordings that few stand out. No more. Andris Nelsons conducts Shostakovich's Fourth Symphony and 11th ("The Year 1905"). It is Nelsons' fascinating take on Shostakovich here that "you can feel the extreme strength of a fragile person" which is one of the neatest paradoxes to explain the best of Shostakovich that I've ever encountered.

The Fourth Symphony is from the era when Stalin first got on the composer's case--with terrible psychological consequences-- and the 11th came from a few years after Stalin's death, when the composer was free at last.

The whole struggle of Shostakovich and Stalin is one of the great allegories in the history of music.

Listen to Nelsons' way with the Bostonians and you might agree this is among the finest Shostakovich recordings in recent memory. ★ ★ ★ ★ (out of 4)