There's little certainty from one year to another at NCAA Division III soccer programs. Without athletic scholarships available, players have more freedom to jump ship after a down season and less incentive to remain committed through hardship. It's just the reality of the level.

At Fredonia, the intensity of the roster turnover was unexpected. Sure, the graduation of five senior starters was anticipated, but the surprise departures of Matt Casey, Pa Lu and Dylan Moeser - two sophomores and a freshman - meant the Blue Devils needed to replace 78 percent of their goals and 58 percent of games started, in total.

After the Blue Devils (4-6-1 overall) outlasted Elmira during the non-conference slate, Gondek discussed the makeup of his team, particularly the effects of the overhaul.

"It's a struggle," admitted the coach in his 17th year at the helm. "This senior class, from 2015 [recruits], which was a really bad year for us, only one guy made it. Next year we'll probably have five or six. 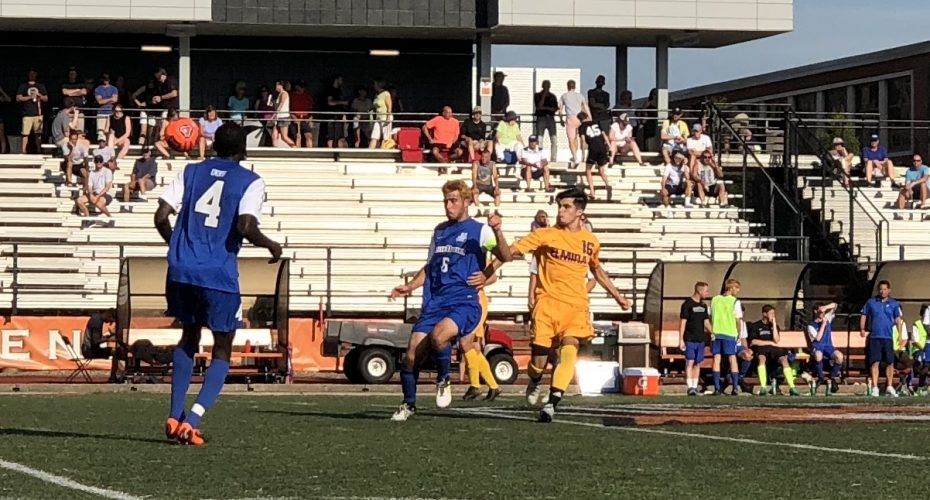 Fredonia, which enters Saturday's Battle by the Lake (1 p.m. at home) against Buffalo State with a 1-3 SUNYAC record, has been predictably unpredictable in conference play.

The Blue Devils lost their first three conference games - including a 5-1 pulverizing by Oneonta - before rebounding against a gassed Geneseo team, upsetting the Knights, 1-0, less than 24 hours after Geneseo went two overtimes in a draw against Buffalo State.

Here are five things to know about Fredonia:

Goalkeeper Ty Bentham is the only starter left from the 2016 Fredonia team that beat Buffalo State, 3-2, in one of the most dramatic rivalry matches the pair has played. He was the one who stood tall in the penalty kick shootout against Plattsburgh that same season, propelling the Blue Devils to their first and only SUNYAC semifinal appearance since 2010. 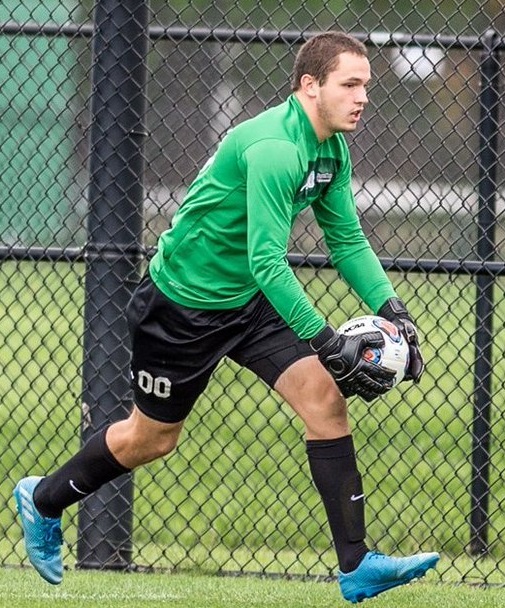 Junior goalkeeper Ty Bentham is one of Fredonia's two captains. (via Fredonia Athletics)

Unlike most of his inexperienced teammates, Bentham has been part of a winning college program and understands the quality necessary to sustain that level. And without the junior goalkeeper, Fredonia would be in dire straits.

It's Bentham's task, then, to help raise the Blue Devils to the requisite level, and the Westfield native - who spent his high school years in Columbus, Ind. - is learning how to lead.

"I try to be the best leader I can - sometimes it can be hard, we've got freshmen and they don't know the ropes," Bentham said. "I try to keep them in line without being too strict, but being the leader that they need as well.

"I'm trying to step up big this season since we don't really have any seniors - we have one, I think - so being that junior and stepping up, it's kind of what we needed, and I like it."

Game-flow over the course of his two and a half years on campus has certainly sharpened Bentham's shot-stopping; he'll likely go down as one of Fredonia's all-time leaders in career saves.

From a team standpoint, it's a positive sign Bentham's save totals have been scaled back so far this season.

"I think I had over 100 saves last year," he noted. "I'd really like to be underneath that, but our back line hasn't given up much so I hope we stay with that throughout the season."

Gondek is the first to appreciate what Bentham means to the program.

"He's a rock for us," he said. "[It's] not necessarily making a save but knowing where the ball is going to come down so he can sniff it out real quick."

A stiff back line

To say Fredonia's back four is the team's strongest unit - despite boasting no upperclassmen - is telling for two reasons. First, it's clearly far from a polished product due to inexperience and lack of continuity, but five shutouts in 11 games is nothing to scoff at.

Both the potential of the existing back four and the present production isn't lost on Bentham, who must react to their every move.

"[Jackson] Retzer and [Kevin] Loftus play great together as center back," the goalkeeper said. "Robert [Aboagye], being a freshman, plays great coming out here and getting used to the game really fast; it's impressive. Sammy Wagner played great for us last year and this year as well." 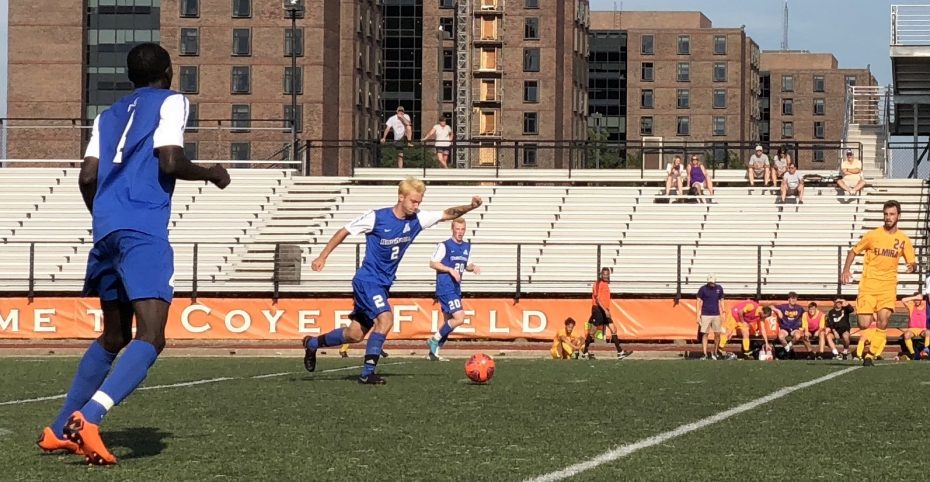 Fredonia center back Jackson Retzer, just a sophomore, is one of the Blue Devils' leaders - by necessity. (Ben Tsujimoto/Buffalo News)

Three of the four hail from Section VI, with Retzer from Williamsville North, Wagner from Starpoint and Loftus from Lancaster. Only the latter played defense in high school, but the former two have converted rather quickly to the new roles. Aboagye, a 6'1 freshman from the Bronx, is a natural athlete with ample room to grow on the pitch.

Frequently under duress - the Blue Devils have been out-shot 167-83, and 61-25 in conference - the back line is vital to ensure those shots aren't coming uncontested from dangerous positions.

Beyond the back four, returning midfielders Matt Belardi and Gittleman, crafty newcomer Matt Cullen and grinding forward Chad Gilson, the rest of Gondek's side is a question mark. Ten different first-year players have earned at least one start, a staggering figure that proves Gondek is still figuring out his best rotation of players. 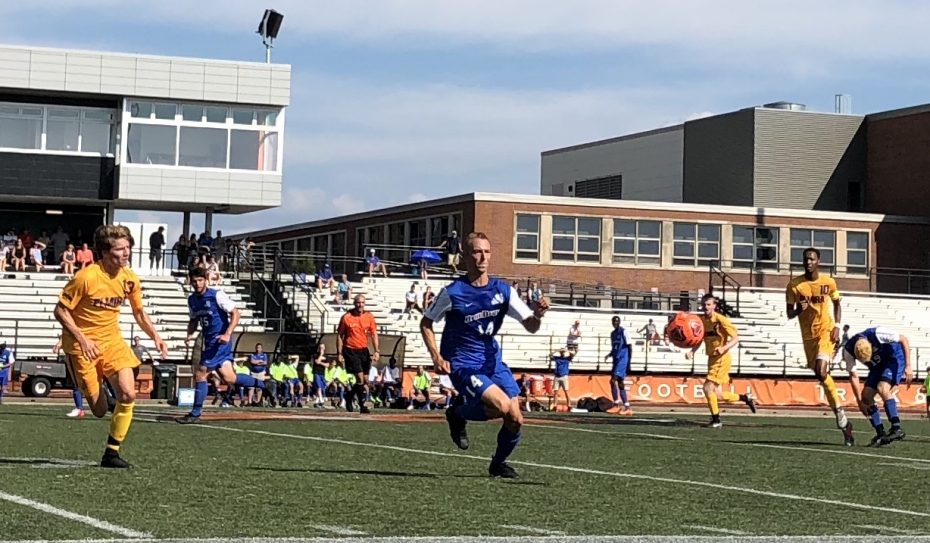 Rochester product Oleg Savka is a newcomer with an opportunity at Fredonia. (Ben Tsujimoto/Buffalo News)

Gilson is the only Blue Devil with more than one goal. While the Newfane alum isn't quite a feared striker, he's willing to battle and create chances through physicality and effort, a concept still being learned by potential-laden forwards Ibrahim Doumbia and Mitch Kulungi.

Oleg Savka, Cole Teelin and transfer Tristan Desnerck round out the forward group which, omitting Gilson, has fired just 18 shots - six on goal - in 1,514 minutes. That's not many.

Should they remain with the program, the nearly 20 newcomers can expect exponential improvement as they grow physically and technically. Gondek speaks highly of Cullen - a technical, creative player on a side of mostly grinders - in the midfield, and there's clear potential in Doumbia and Kulungi, even though they're raw.

"There's a couple guys where you see little flashes but they're not quite there, they're not very complete," Gondek explained. "I said to my AD [Jerry Fisk] that we're not going to get worse, we're only going to get better. But can we win the games that we need to [in order to reach playoffs]? We've got some powerhouse teams in our conference right now, our conference is so tough from top to bottom.

"We've got to find some wins somewhere - I don't know how we'll do it."

Despite one win in four conference games, Gondek's side remains in contention for one of the six playoff spots in the SUNYAC. Given the legions of new faces at the program, that's a feat in itself.