Alex Miller once gorged himself on animal protein to fuel his five-day-a-week strength-training workouts.

Then he came within a thread of dying from a heart attack, at age 32.

“I still can’t believe it,” said Miller, who passed out last year while trying to move a small trailer and learned afterward that a key artery near his heart was 99 percent blocked.

The incident left such a mark that he got a tattoo on his left wrist with the longitude and latitude of the spot where he went down.

It also scared Miller and his girlfriend, Brittany Kruse, straight into the world of plant-based eating.

The couple have since chronicled the transition online through White Gloved Vegan, capturing the imagination of plant-based eaters and potential converts across the globe.

Their methods vary from the most hardened vegan advocates – who steer clear of any product they believe harms and exploits animals – but they hope their message resonates with anyone who sees a vegan diet as the best medicine for good health.

“Our motto is 'Vegan for any reason,' " said Kruse, who started dating Miller four years ago.

The couple won’t eat any animal product, but they consider anyone who deliberately reduces their animal protein – by any amount – part of their White Gloved Vegan fold. That includes even those who decide to go meatless a day or two a week.

"We don't expect anyone to do what we're doing,” Miller said. “We just want to provide people a platform where they can feel there is positive reinforcement for living this way. Most people dip their big toe in the water when they go to a vegan diet. It doesn't help when you say, 'You just ate honey [and are exploiting the bees]. How dare you call yourself vegan?' "

The couple sat down recently to recall the whirlwind of their past 20 months. 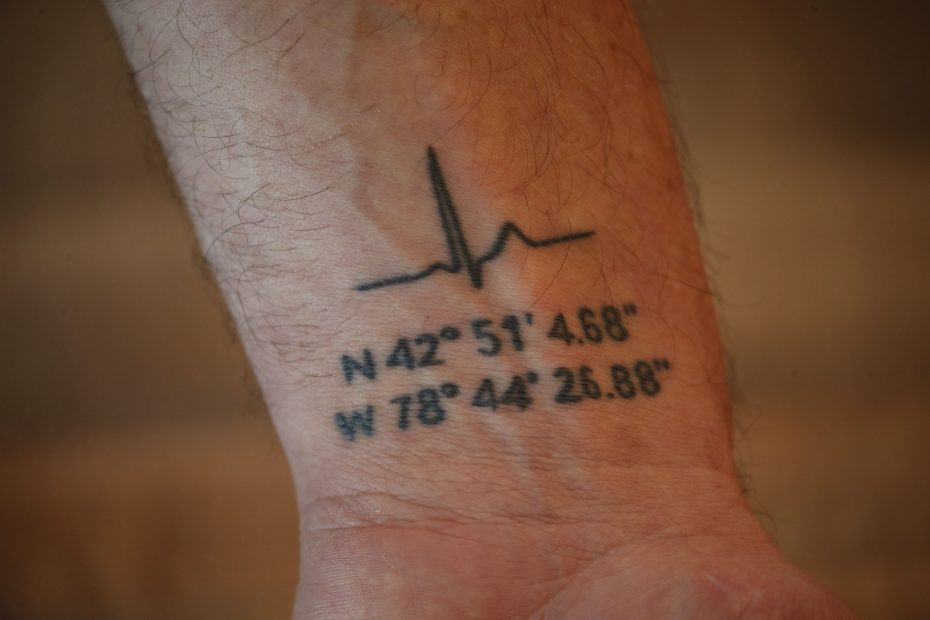 Alex had a tattoo made with the coordinates of where he was when he collapsed, to remind him of the reason for his new nutritional life. (Robert Kirkham/Buffalo News)

Miller, who turned 34 in July, leads a busy life. The former high school and college football fullback is a special education teacher at East Community High School (No. 309). He co-owns Born and Raised, formerly In the Buff 716, a novelty gift business he started after he snapped an iconic photo about 2½ years ago of the Shea’s Buffalo theater sign downtown.

The couple met through mutual friends on Facebook and settled into a typical suburban life in West Seneca.

That changed in early 2017, when Miller began to experience what his primary care doctor believed was acid reflux, perhaps brought on by nerves.

"It felt like a ball of anxiety coming on in my throat,” he said.

The sensation became more frequent, and severe, over several weeks, particularly after walks up three flights of stairs to his classroom. "I felt wind-coming-out-of-my-lungs kind of pain," he said.

In mid-May, Miller collapsed while he was alone and struggling to move a small trailer up his father’s sloped driveway, also in West Seneca.

"My surgeon later told me that's where I should have died," he said.

The young doctor at Mercy Hospital chose to conduct an angiogram after he learned Miller had passed out while exerting himself before arriving at the South Buffalo facility. He and his nurses reassured Miller it was just a precaution as radioactive dye pulsed into his arteries. You could have heard a pin drop, Miller said, when the surgical staff discovered a 99 percent blockage in his left anterior descending artery – often called the “Widow Maker” because complete blockage almost always leads to death. A medicated stent was inserted to resume the proper blood flow.

In the recovery room, Miller, his mother, Kathleen A. Smith, and Kruse were told that he survived passing out because of his age and otherwise good health.

“He said, 'I don't tell most of my patients this, because they're not 32 years old and can live a full life. They're set in their ways. But you have a chance.’ ”

Miller and Kruse spent much of the next few days watching vegan documentaries on Netflix, including the doctor-recommended "What the Health," as well as "Forks Over Knives." They also read up on the subject. 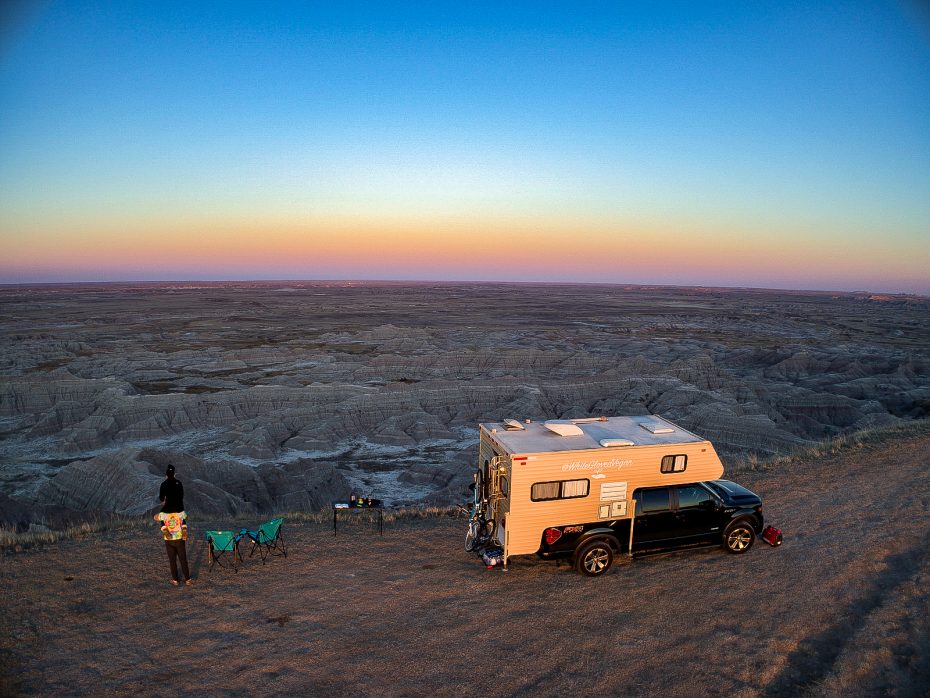 Brittany Kruse and Alex Miller headed out cross-country in search of great vegan food after his health scare. Among the stops in October 2017: Badlands National Park in South Dakota, where Miller shot this photo.

"We had a pretty healthy American diet," said Kruse, who rid the house of all dairy, meat and processed foods in the house.

The couple had reached the turning point after adhering to an eating plan that consisted largely of ground turkey tacos and chili, fish and chicken, and eggs that came mostly from two chickens they raised.

Miller knew his large meal portions were packed with lots of animal protein, something he easily justified because of his strenuous workout routine.

“We never ate fast food,” said Kruse, who also rarely consumed red meat. The hardest thing for her to give up was cheese. "I love cheese," she said.

The couple based their new meals on vegetables and fruits – starting at first with a lot of faux meat that has become popular as a growing number of Americans tilt more of their meals toward plant-based alternatives. Legumes, brown rice and ancient grains also became part of their almost-daily mix.

By this point, Miller and Kruse had honed some pretty good social media chops.

“The thought was by sharing our story online, maybe people would want to follow the journey that we're going through," Miller said.

Last October, the couple, prompted by Miller’s health scare, decided to go on a cross-country road trip. They popped a camper onto the back of Miller’s Ford F-150 pickup, slapped a White Gloved Vegan logo on it and spent 25 days visiting vegan restaurants across the country. They used the website happycow.net to find spots along the way. They snapped pictures and posted them online. People started following them on their journey.

"We always wanted to do some kind of business together," Kruse said. "I enjoy writing and he enjoys taking pictures. We thought that even if it didn't go anywhere, it would be something to track our journey together – and a place to have all the recipes that I cook."

The questions – and judgments – from friends, family and co-workers began back home after the couple changed their eating habits.

Had Miller and Kruse become hippies? We’re they eating grass? Did they plan to quit their jobs and live off the land?

“Our idea was that you can have white-gloved status, live a nice life and still follow a plant-based diet,” Kruse said. “You don't have to be embarrassed by it. It's a diet choice; it's not a particular lifestyle."

The couple also became aware that plant-based eaters, too, could be prone to judgment – and that the terms “vegetarian” and “vegan” could mean different things to different people.

“If I’m drinking a beer and it has hops, some vegans may say, ‘Those hops came into a brewery on a belt made of leather,’" and that’s disqualifying, Miller said. “Whether you want to be plant-based, vegetarian, vegan for the animals, vegan for the world, vegan for your health, you're still a white-gloved vegan under our criterion.” 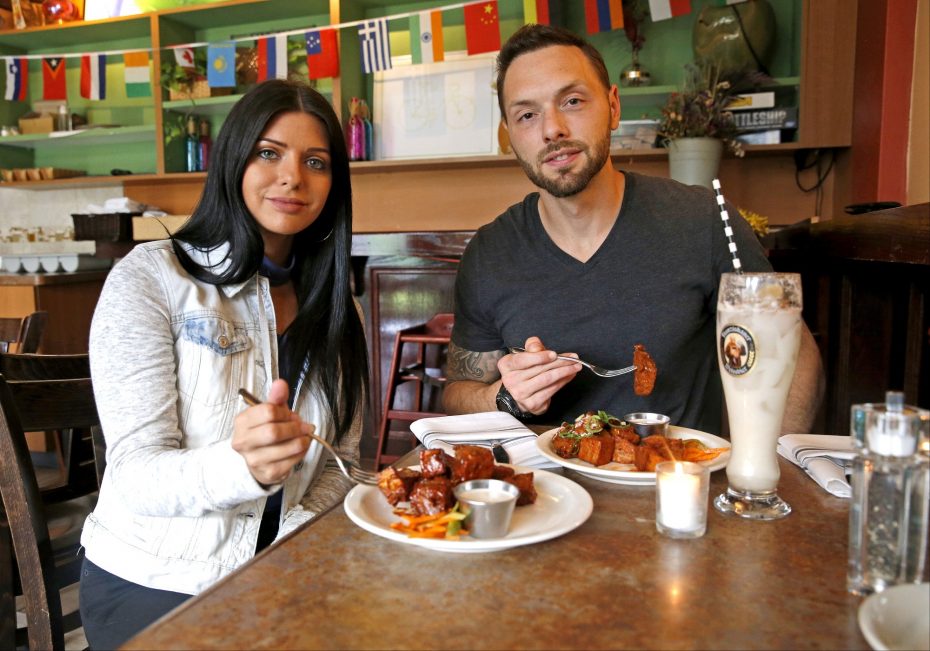 Alex Miller and Brittany Kruse enjoy vegan seitan wings with cashew blue cheese dipping sauce at Merge, on Delaware Avenue. The couple say it's among their favorite restaurants in Buffalo because they can eat great vegan food while friends can join them for non-vegan fare. (Robert Kirkham/Buffalo News)

"In the beginning, I thought I was destined to eat salads on a daily basis,” Miller said. “That's not the case. It's a wonderful thing being on a plant-based vegan diet."

"If you know how to cook and you know what you're doing, it's good. It works," said Kruse.

"We don't do a lot of pasta and a lot of carbs," Kruse said. "We'll do spaghetti squash, pinto bean meatballs with tomato sauce."

She also regularly makes tofu and sweet potato fries – in an air fryer.

"In our version of veganism, we're trying to be more plant-based, five ingredients or less – usually three," Miller said.

The couple also has gradually reduced their reliance on products that are vegan but not necessarily healthy.

"Oreos are vegan," Kruse said. "There's no dairy in them. There's no meat. There are bags of chips that are vegan" for the same reason. There's also "fake meat."

"That's fine here and there, but if you look on the labels, there are 30 ingredients," she said. "It's not the healthiest."

Soy protein isolates are a common, and some believe unhealthy, ingredient in many of those foods, she said.

Kruse also has learned how to make cheese out of cashews. "I never would have guessed in a million years that this type of thing existed," Miller said.

Now, they’re unafraid to start the food discussion. Their families make vegan side dishes for gatherings. Miller and Kruse will bring a vegan dish to share. 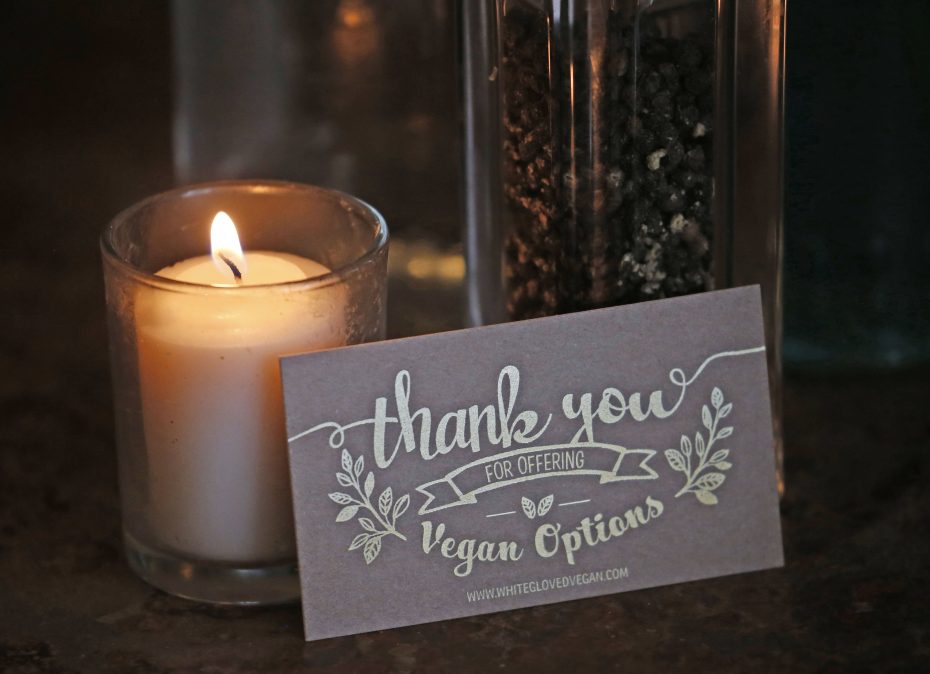 Alex Miller and Brittany Kruse often leave these "Thank You" cards at restaurants that offer vegan choices. They encourage their followers to do the same. (Robert Kirkham/Buffalo News)

Miller also lost a close friend his age to cancer during the last year. He has since turned over operation of Born and Raised to Chris Gaglione, a partner in that business, and is focused on his teaching job and White Gloved Vegan.

"The cheese and the meat isn't tempting when you're faced with losing your life or losing someone you love," Kruse said.

The 6-foot-1 Miller weighed 215 pounds when his clogged artery was discovered last year. He’s lost 22 pounds on his plant-based diet.

Challenges also came with the transition. Doctors have prescribed several medications, including one that causes joint pain, and encouraged him to take a daily aspirin.

It has raised a question for Miller: "Do I believe in my diet or do I believe in the pills, or do I mix both? It's hard in my experience so far, even in the Cleveland Clinic, where I’ve gone to see specialists, to find doctors who believe in a plant-based diet," maintaining there is a lack of clinical research.

The couple have continued to learn more from nutrition experts and, on a summer cruise to Alaska, brought back a scoby – the key fermentation ingredient in kombucha – to add to their plant-based repertoire.

The couple promotes these and other efforts to satisfy plant-based eaters by providing followers with gold and silver business-sized cards that patrons who enjoy a vegan meal in any restaurant can leave with a thank you note. Miller and Kruse also encourage followers to leave the cards in grocery stores, at farmers markets and with individuals who advocate for plant-based eating.

"This movement,” said Miller, “is not going away.”