Soon after Thomas Dougherty started work as a researcher at Roswell Park, he had an idea about how to make a century-old concept of killing cancer cells with light into an effective weapon against the disease.

His brother, Joseph Dougherty, said Dr. Dougherty shared his idea of combining laser light with a non-toxic, light-sensitive drug with several medical doctors, all of whom assured him it could not be done.

"They said, 'Oh, no, no, that would never work,' " said Joseph Dougherty. "He was the new guy, so what did he know, and he was a Ph.D., not an MD. But you never told him no, believe me. You would have to prove it to him. He took things to the nth degree if he thought he was right. And it turned out he was right."

Thousands of cancer patients who benefited from Dr. Dougherty's breakthrough have his stubbornness to thank for their treatment, and in many cases, for their survival.

Dr. Dougherty, the developer of modern photodynamic therapy (PDT) and chief emeritus of Roswell Park’s Photodynamic Therapy Center, died Tuesday, Oct. 2, in Highland Hospital in Rochester after a short illness. A Grand Island resident, he was 85.

"He put himself through college by mowing lawns and working at Loblaws grocery store," said his brother. "He worked a lot, but we'd hang out together." When Dr. Dougherty first got into boating, which became a lifelong passion, the three brothers would go out on his runabout together after school, stopping at Pat's Hot Dogs on Sheridan Drive.

Dr. Dougherty earned his Ph.D. in physical organic chemistry at the Ohio State University in 1959, then returned to Western New York to work for 10 years as a chemist at E.I. du Pont de Nemours & Co. in the Town of Tonawanda.

In an interview with The News in 1998, Dr. Dougherty said he longed to conduct medical research that would help patients. When the du Pont plant announced its planned move to Delaware, he began to scout positions at Roswell Park. "He didn't want any part of moving, which gave him the push to go to Roswell," said Dr. Dougherty's brother. "And he took a huge pay cut to do that."

At Roswell, he developed PDT, a cancer treatment that combines laser light with a nontoxic, light-sensitive drug. The process kills cancer cells directly, shuts down blood vessels in the margin around the tumor and stimulates the immune system to kill cancer cells throughout the body.

Although PDT was first discovered more than a century ago in Germany, until Dr. Dougherty’s breakthrough, researchers could not find ways to use light-sensitive compounds to treat the disease. Dr. Dougherty successfully treated cancer with PDT in preclinical models for the first time in 1975.

In 1998, Dr. Dougherty told The News, "I doubt if there's another place in the entire world where I could have done what I did here. This whole experience at Roswell Park has been so unique and it just happens to be in my own backyard."

After selling his company, Photofrin Medical, Inc., to Johnson & Johnson in 1984, Dr. Dougherty used the proceeds to establish The Oncologic Foundation of Buffalo, which initially funded PDT research at Roswell Park.

“Tom’s foundation gave me my first grant, which allowed me to begin to investigate the role of PDT in anti-tumor immunity,” said Sandra Gollnick, now director of Roswell Park’s Photodynamic Therapy Center. “He was a great man, a visionary and a good friend.”

He received numerous accolades and awards, including the Lifetime Achievement Award from the American Society for Photobiology, the Sullivan Award, Ohio State University’s highest honor for a graduate, the Benjamin Franklin Award for the Betterment of Human Health, Western New York Inventor of the Year, a 2006 Pioneers of Science award established by Nobel Laureate Herbert A. Hauptman and a Doctorate of Humane Letters from Canisius College.

He was the author or co-author of more than 200 publications and held more than 50 patents. 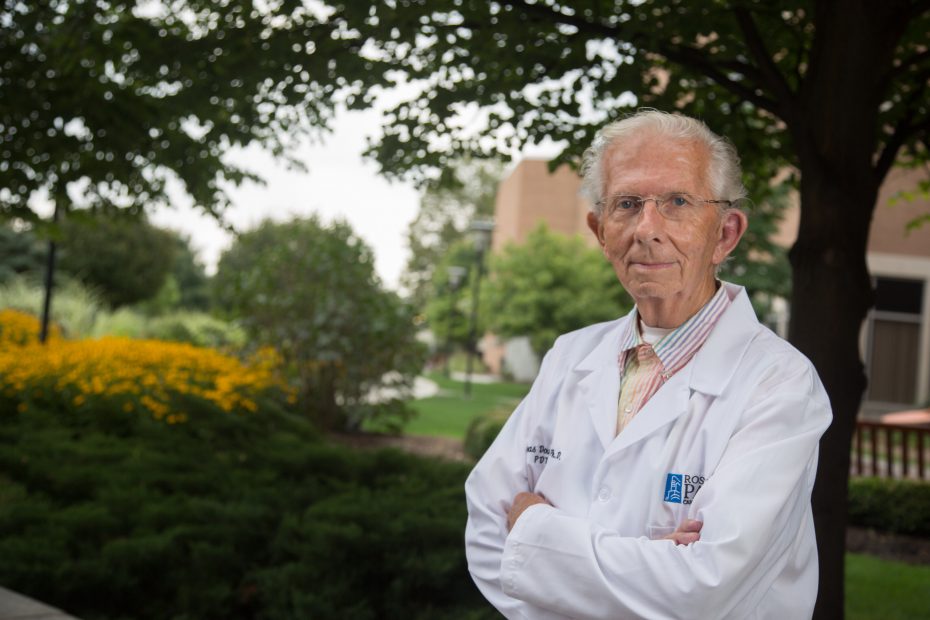 A humble man, "he always bragged about the people he helped, never himself," said his brother. His family called him "a saint without a halo."

Nancy Oleinick, professor emerita of Radiation Oncology at Case Western Reserve University School of Medicine in Cleveland, remembered Dr. Dougherty as “a superb scientist, a gentleman, a visionary and a cheerleader for PDT.”

"Tom certainly left the world a much better place," said David Kessel, professor of pharmacology at Wayne State University School of Medicine in Detroit. "He was one of the 'good guys' of whom there can never be enough."

Dr. Dougherty’s 1983 trip to China to lecture on photodynamic therapy was the subject of a 30-minute special on CBS.

He retired from Roswell in 2002, but later returned to the department, volunteering to write abstracts and help with research. "I would say the last two years he didn't go very often, but up until then he was going a few days a week," Dr. Dougherty's brother said.

He was a devout member of Parkside Lutheran Church.  "A lot of people would find that odd, being a scientist is all about the exact, religion obviously is not exact. But he had great faith," said his brother.

Dr. Dougherty enjoyed taking his dog out on the water in his cabin cruiser to relax and read, his brother said.

His family called Dr. Dougherty "an exceptional human being, a shining light when it came to being creative" and "magnanimous beyond compare." His family quoted him: "If your heart is open, if it is free of meanness, destiny takes us to wonderful places."

Besides his brother Joseph, Dr. Dougherty is survived by his sister Carol Perry and several nieces and nephews, as well as great-nieces and great-nephews.