If you like Oreos, and you like chicken wings, well, keep eating them separately because combining them is a culinary catastrophe.

That's according to a group of taste testers who tried out the new "hot chicken wing" flavor of Oreos, recently introduced by Mondelēz International.

This variety – along with wasabi – is available in China only, for now. And that's for the best, our judges decided.

After reading about the new flavor, we ordered some of the new Oreos through eBay to see how closely Mondelēz came to mimicking the taste of classic chicken wing sauce and how that tastes sandwiched in between two chocolate wafers.

For $14.99, we got a package of 10 cookies. Every word on the box was written in Chinese characters except "Oreo," and it had an image of an Oreo cookie split apart with flames, two flat wings and a hot pepper rising out of the orange cream center.

A friend translated the ingredients for us. The "spicy chicken flavor mix" has malt syrup, sugar, salt, MSG and onion, garlic and chili powders.

The concept of artificial wing flavor, in the form of a cream and eaten with chocolate, lived up – or down – to most tasters' expectations.

News food critic Andrew Z. Galarneau paused for several seconds after biting into his sample before offering, "Oreos should not burn."

"It reminds me more of a spicy barbecue chip than anything else," Galarneau said, before tossing the rest of the cookie in the trash. "This can burn in hell as far as I'm concerned. It's just a layer of wrongness inside two chocolate wafers."

"I don't mind it," she said cheerily. However, she said, "Chicken wing is not what comes to mind."

"I'd totally buy it for a novelty," she added.

Gusto digital guru Ben Tsujimoto grimaced after biting into his cookie. "It gets worse, quickly," he said. "A spicy Cheez-It, if you stuck it inside an Oreo."

Assistant Managing Editor Bruce Andriatch said, "Oh, it's spicy on the way down. It's spicy, but it doesn't taste like Frank's hot sauce."

"It's not a pleasant taste," he said.

If you're going to test out the taste of chicken wing flavoring, you've got to bring in the Wing King, right? 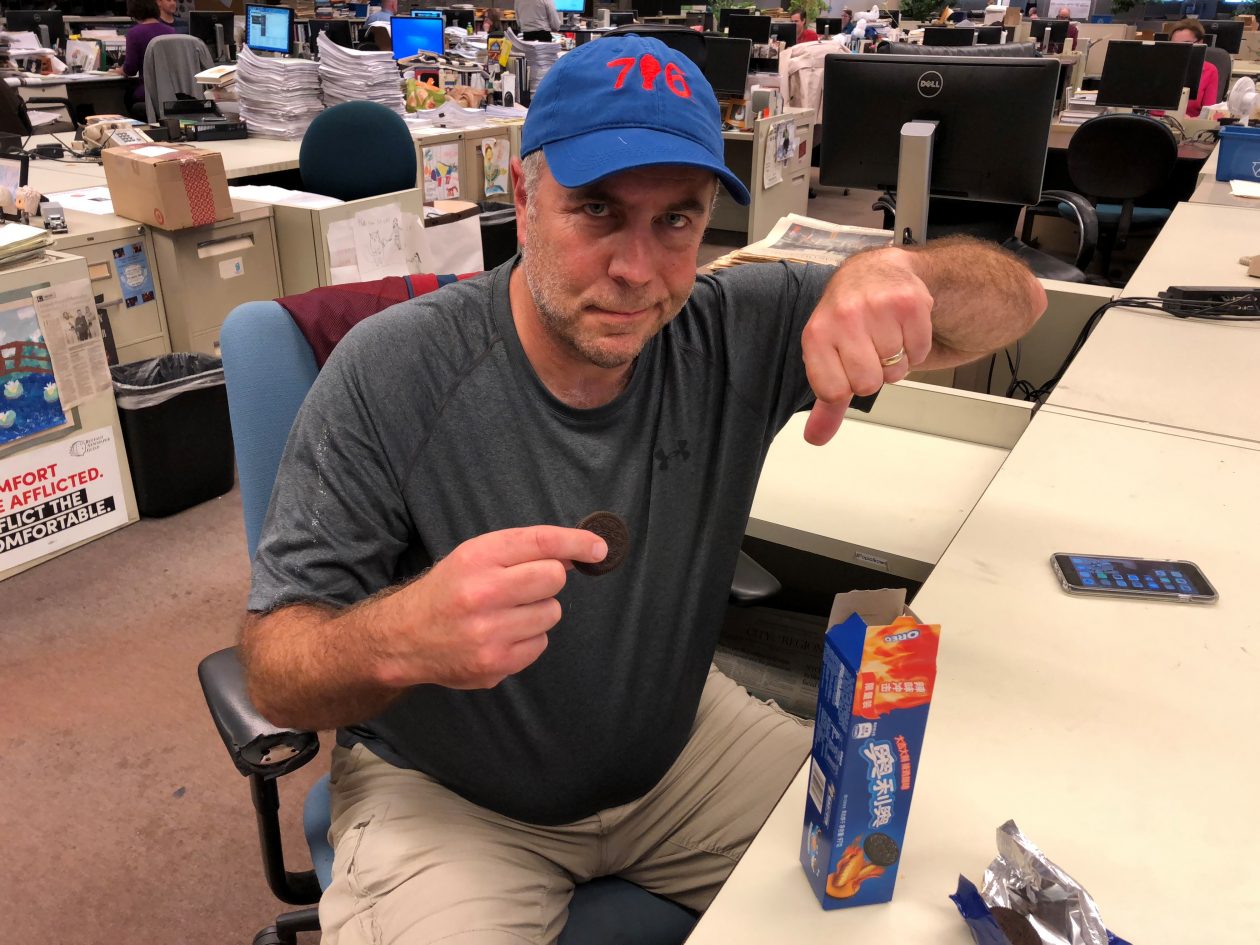 Drew Cerza, holding the cookie close to his nose, said, "Tell me this doesn't smell like a burnt Cheerio."

"Aw, oh my God," Cerza said after his first bite. He then took a second cookie, twisted off the top wafer and scraped off the filling with his teeth.

"I could see it selling as a joke," he added, as the flavor lingered. "That's, like, disgusting. I think I'm getting a stomach ache. All you taste is cardboard and spice."

We'll give the final word to one wag who quipped: "Why can't the president put a tariff on these?"