It is an American anomaly – hypocrisy would be the less charitable word – that a nation supposedly founded on freedom of religion and freedom of expression is so often intolerant of those who practice "other" religions or use "un-American" dress to express their faith.

But it is that American peculiarity that makes Turban Day on Saturday so vital.

Sponsored by the three Sikh temples in Western New York – in Williamsville, Clarence Center and Niagara Falls – and the Council of Heritage and Arts of India, with support from the Amherst Community Diversity Commission, the goal is to dispel misconceptions and let anyone who’s interested learn about the religion.

"Whoever walks in will have an opportunity to tie a turban," said Sibu Nair, executive director of the council.

Organizers have ordered up to 400 turbans for visitors to learn to tie and take home. There also will be traditional Punjab music and dance during the event from 11 a.m. to 3 p.m. in the Harlem Road Community Center, 4255 Harlem Road, Amherst.

Just as some people stereotype Muslims as terrorists, Sikhs get stereotyped as Muslim, even though the two religions are different.

A few years ago, six were killed and three wounded when a crazed gunman attacked a Sikh temple outside of Milwaukee.

More recently, in late July and early August, two Sikhs were attacked in separate incidents in California, with a 71-year-old man kicked and spat on as he lay on the ground. In the other attack, a 50-year-old Sikh was beaten and told to "go back to your country" by cowards who spray-painted white nationalist symbols on his truck. Ironically, after a CT scan showed no serious brain damage, he told The New York Times that his turban – which prompted the attack – may also have saved him when the punks beat him on the head.

Fortunately, there has been no such violence reported here.

Jagtar Singh Rajput, an organizer from the gurdwaras – Sikh places of worship – said he has been asked if he is Muslim, and he politely explains that he is not, and what the turban means and what Sikhs believe.

"Our main purpose is to let people know we are not Muslims," said Rajput, a University at Buffalo retiree from the Punjab region of northern India who has been here about 30 years. 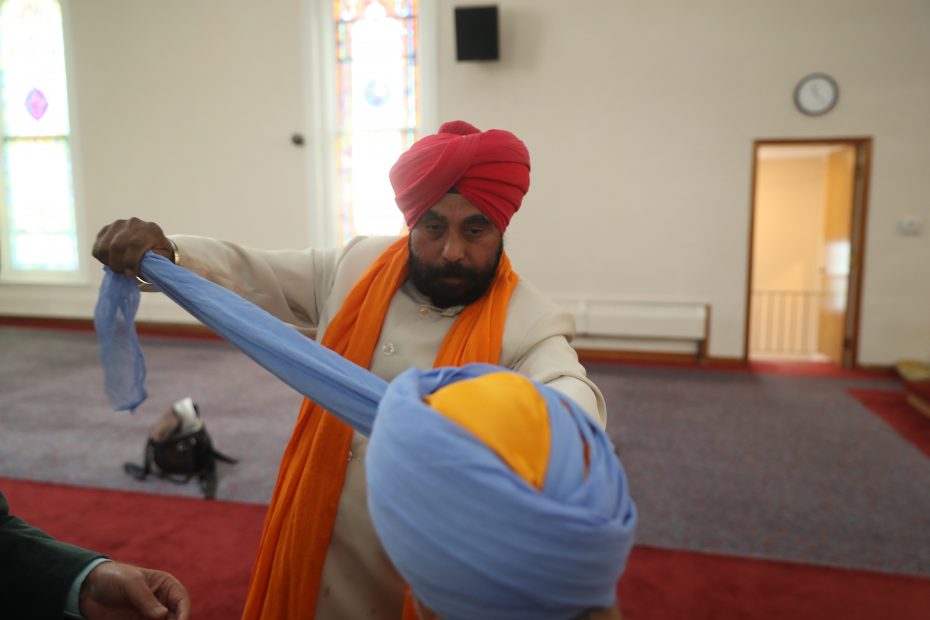 The religion believes in one God and eschews such things as fasting or pilgrimages, and focuses instead on equality of all regardless of race, gender, caste or creed. Service to others is a main pillar of the faith, which was founded in the 15th century, drawing followers from both Hinduism and Islam.

One example of that service is the "langar," or free meal Sikh temples offer every Sunday to anyone who shows up, whether they are Sikh or not.

"We’re even more happy when outside people come," Rajput said.

Such principles are laid out in the Guru Granth Sahib, the Sikh holy book left after the last of 10 gurus died in 1708.

He said male beards are part of Sikhism and "our faith teaches that we should wear a turban all the time." Historically worn by royalty in India, its widespread adoption by the Sikhs is an example of the equality that is one of the religion’s tenets.

Made of cloth about 6 yards long, turbans take about three or four minutes to tie, and can be a variety of colors to match other parts of the wardrobe.

Saturday’s event will include handouts about the turban, which females also can wear.

"Basically, it’s a social awareness event," said Nair, who is Hindu but supports the outreach effort. "We’d like to do this every year going forward."

Turban Day has been held in other cities and thousands turned out for last year’s in Times Square. They don’t expect that many in Amherst, but whoever shows up will be welcomed with open arms.

The Sikh event is a living example of what every religion espouses, but which so many adherents seem to have so much trouble doing: Love thy neighbor.