Joshua Aviv said he can't wait to get SparkCharge established in Buffalo, after winning the $1 million grand prize in the 43North competition on Wednesday.

In fact, Aviv, the founder and chief executive officer, said the company will be at a University at Buffalo job fair on Thursday, recruiting for talent.

"We're super excited to be here and we can't get wait to get to work," he said.

Syracuse-based SparkCharge makes portable charging stations for electric vehicles. Aviv pitched 43North's seven judges on the product's ability to recharge electric cars wherever necessary, instead of relying on a fixed charging station. The company is developing a relationship with the AAA to carry its units, to recharge vehicles that run out of power, he said.

SparkCharge was one of 10 finalists that reached the final round, competing for the $1 million grand prize.

"We came here with a full, blown-out plan for Buffalo," Aviv said. "I think that's what clinched it for us. We came here essentially Buffalo-centered and we said, this is why we want to make Buffalo great, and we revolved our pitch around that."

Aviv said SparkCharge will put the $1 million award largely toward hiring and manufacturing. He said he felt the portable units would help the electric vehicle market grow by removing customers' "range anxiety" about being stranded far from a charging station.

$1M is no sure bet: Here's where 43North winners are today

One of the seven judges, Rochelle Stewart, an adviser to the Morgan Stanley Multicultural Innovation Lab and founding partner of 3C Partners, said Aviv made a strong impression with his pitch.

Another judge – Deborah Quazzo, managing partner of GSV Accelerate – had quipped that Aviv seemed ready to be the mayor of Buffalo.

"When you have an entrepreneur who has that much passion, who clearly, clearly wants to build his company here in Buffalo, and then has this innovative, before-its-time in a way sort of product that has the potential to scale in an industry that's evolving, changing, we really loved it," Stewart said.

This was the fifth edition of the 43North business plan competition, launched as part of Gov. Andrew Cuomo's Buffalo Billion program. The final event had "Shark Tank"-like appeal, with more than 3,000 tickets distributed for the event at Shea's Performing Arts Center. Beyond the battle for prizes, the competition aims to stimulate entrepreneurship in the Buffalo area, by recruiting new startups to the region or bolstering rising companies already here. 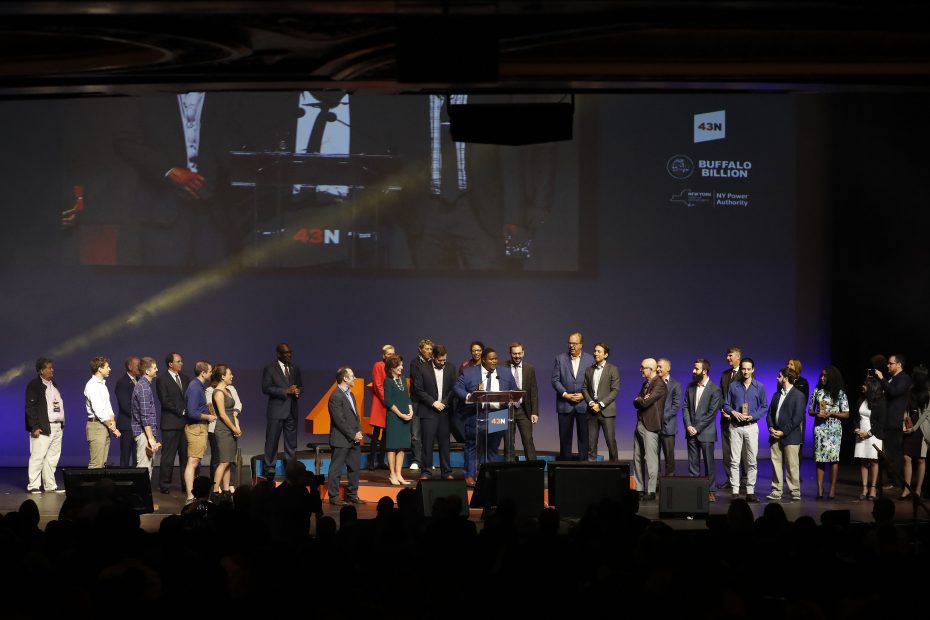 The prize winners agree to base their operations in the Buffalo area for at least one year, and 43North obtains a 5 percent ownership stake in their companies. 43North has focused lately on applicants it sees as a good fit with the region and its business resources, who might be more likely to stay beyond their one-year obligation.

Along with the $1 million grand prize winner, 43North awarded seven $500,000 runner-up prizes. Those prizes were awarded to:

•HiOperator, based in San Francisco, Calif., calls itself a "virtual assistant," providing "customer service as a service" to its clients. Clients pay the company based on the volume of their service.

•NaturAll Club, based in Philadelphia, Pa., sells organic hair products made from ingredients such as avocado, pulp, bananas and coconut crème.

•Kickfurther, headquartered in Boulder, Colo., is a crowdfunding site that raises money for businesses to manufacture their inventory. After the inventory is sold, the investors are paid a percentage of the total.

•Immersed Games, based in Gainesville, Fla., has created a video game aimed at improving students' science and engineering skills.

•Forsake, a Boston, Mass.-based company, designs and makes durable all-weather boots and sneakers. The company was founded by two friends in 2010.

•LegWorks, which is based in Buffalo, after the company moved its base of operations here from San Francisco, Calif. The company makes prosthetics, and earlier this year won the $10,000 grand prize in the Bright Buffalo Niagara Entrepreneurial Expo.