When Steve Becker was a teenager, playing high school basketball in North Tonawanda, he and his buddies used to kill time after practice in the gym by pretending the clock was running down, while firing up some half-court shots.

“Thousands of them,” Becker said.

In a way, it was all practice for the day when Arianna Ruhland needed him.

Becker is a math teacher at Sweet Home High School. He was helping to keep things organized last month at a pep rally that began the school’s homecoming weekend. Becker, as a basketball guy, was in the middle of it when Sweet Home administrators told hundreds of students in a packed gymnasium that they were about to witness a little contest.

The idea came from principal Scott Martin, who uses the word “connectivity” to describe the larger notion. Basically, Martin said, the goal is always reminding students “that adults are trying to work with you, not against you.”

It meshes with a belief that every student matters as much as the athletes in the spotlight, which Arianna was about to prove in a big way.

The contest went like this. Martin went out beforehand and bought a 43-inch flat screen television, with money from his own pocket. “Not that much,” he said, downplaying the cost. He put the names of a bunch of students into a container, kids he thought might appreciate a moment in the sun, and a couple of those names were drawn on the court.

If picked, you could either try three half-court shots yourself – make one, and win the TV – or choose any adult in the place to do it for you. 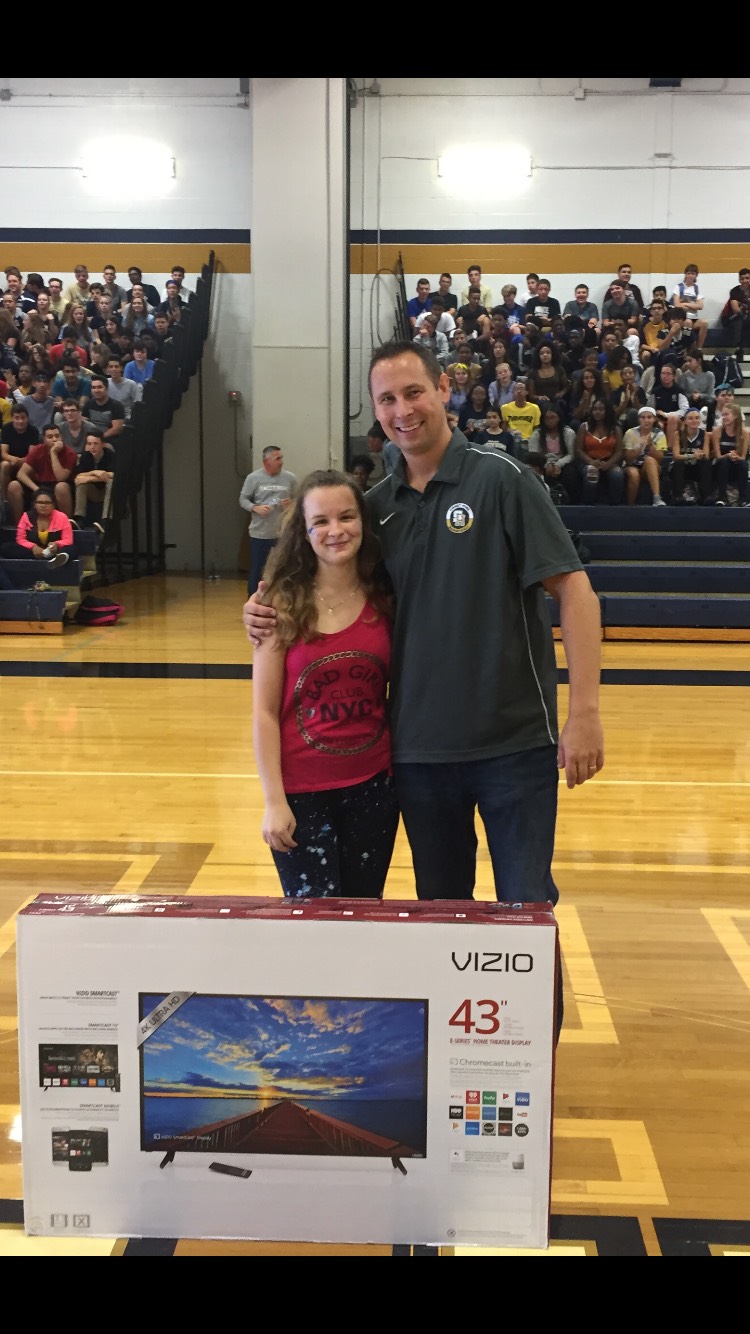 Steve Becker and Arianna Ruhland, on the night of the contest. (Sean Kirst/Buffalo News)

The first teen selected, Roni Barrett, asked boys varsity basketball coach Brandon Woods to do the half-court shooting, on Roni's behalf. The crowd groaned in sympathy as Woods came within an eyelash on one try, but none of the three shots went through.

It was Arianna, an 18-year-old senior, who was not exactly thrilled.

The pep rally was already an emotional situation for her. She is part of a class for students with special needs, taught by Lisa Floreano. Arianna can be shy until she gets to know you. At school, she typically prefers to stay close to Floreano, a teacher she reveres.

On that day, her friends had talked her into sitting on the other side of the gym with the entire senior class. It was the first time she had done it in four years of high school. For her, it was a big step, a big deal.

In the middle of it all, Koziol called her name.

“I wanted to run away,” Arianna said.

Everyone was shouting and cheering. The kids around her urged her to go for it. Another student, Brooklyn Mitchell, a cheerleader, put an arm around Arianna to provide support as she headed to the court. Once on the hardwood, Arianna felt more at home.

She plays on Sweet Home’s unified basketball team. That squad, she said, has been one of the great opportunities of her life. The team includes students both with and without disabilities, another step toward the community Martin speaks of building.

Based on that experience, Arianna initially thought she could take the shots herself, from the foul line. She had plenty of incentive. Times have been tight for her family.

Arianna has two little brothers coping with health concerns. Her mother, Jessica Gunsauley, said this has been a hard year with bills, and the family was using one of the old box televisions that were commonplace before high-definition television.

For Arianna, the goal was winning her mother this beautiful television, until the adults explained the shots had to be from half-court. Arianna grew upset. How could she possibly do it?

Don’t worry, Becker said. He explained that she could try it herself, or choose an adult.

Arianna took a good look at the distance from half-court. On the spot, she selected Becker as her proxy.

She knew him a little bit. He has been a presence at some unified games. Like many teachers in the school, he sometimes pops into the special needs classroom on the days when the teens make weekly soup, to sell to faculty for lunch.

What she did not know was that Becker played basketball at both North Tonawanda High School and SUNY Buffalo State, and that he helped coach basketball for years in different variations, and that, honestly, he was dying to give this a crack.

"I never mind having a basketball in my hands," Becker said.

He had three chances. He took a couple of steps for impetus, and tried to use classic jump shot form.

The first one, oh so close, knocked off the front of the rim.

The second one “got away from me,” Becker said, and swung far to the left.

The third one, as it left his hand, also felt a little far, like maybe it was going to hit the iron on the back of the rim, then carom out.

Instead, it "self-corrected," Becker said. The ball went straight through.

It is hard to fully capture what happened next. The place went nuts. The students poured from the bleachers and ran onto the court to swallow up Becker and Arianna, who said she was a little bit afraid they were going to flatten her. No worries. It was basically one massive, lunatic hug, as captured by countless student videos.

When it was over, when the teens took a deep collective breath and went back to their seats, Arianna stepped away from the court, called her mother and said, “Mom, I won you a TV!”

Mother and daughter were both emotional. The family has been broke, which means life is never easy. “A lot of sad things have happened,” Arianna said, and winning the television seemed to end that streak. That night, she sat down and wrote Becker a thank-you note, in which she described him as "so awesome" and added a drawing of a rainbow.

For the last week, for the first time, her family has been watching Netflix.

"It was like a miracle relief," said Gunsauley, Arianna's mom, speaking of the television. 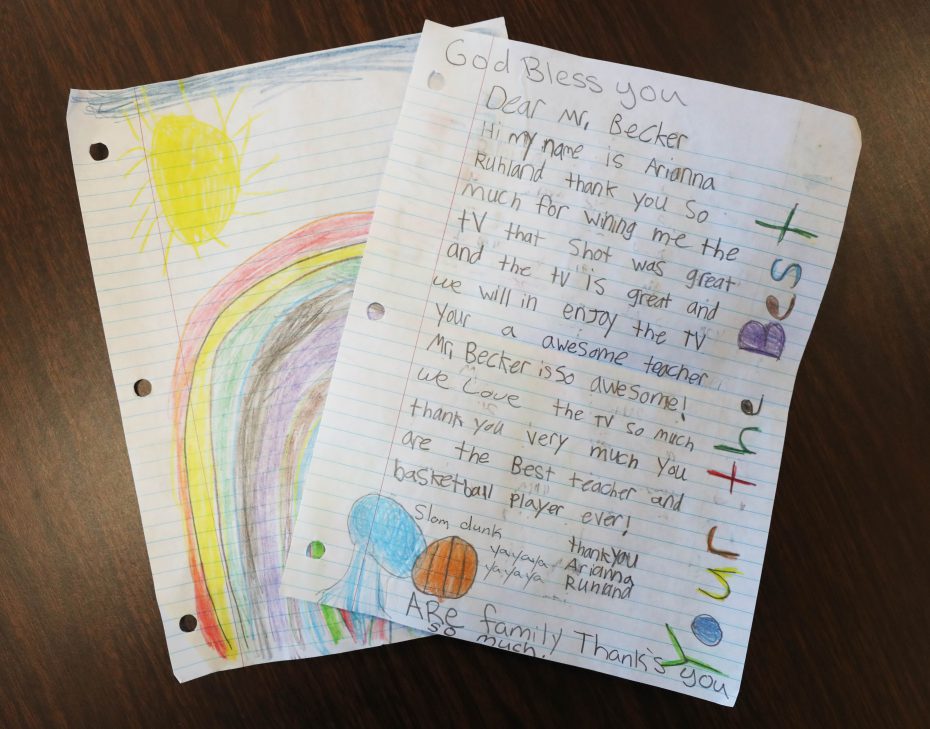 To Martin, the principal, everything went even better than the plan. How, he asked, do you really define an education? What are the lessons about friendship and empathy that you hope students carry with them for the rest of their lives?

“I’d say this,” Martin said. “When it’s said and done, 30 or 40 years from now, they might not remember what they read on page 74 of some textbook. But for the rest of their lives, they won’t forget that one moment in the gym.”