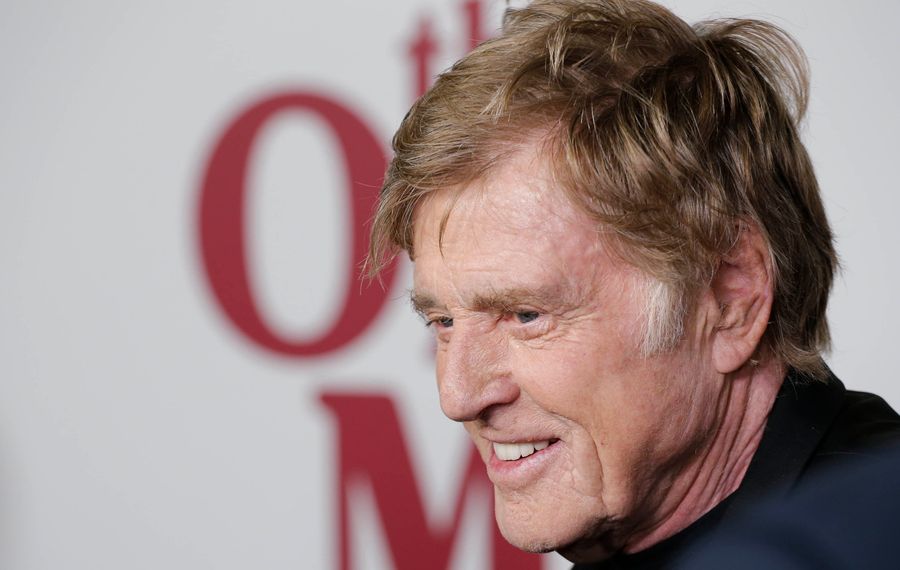 Robert Redford has lost 60 percent of the hearing in his left ear, it has been widely reported.

That's what happens when a 77-year-old man insists on making an arduous movie where he spends 12 hours a day in a water tank or being soaked with a hose held off-camera while a wind machine blasts away.

The movie was "All Is Lost," an epochal and truly great film with a dramatically apt title that also had the notable misfortune of being guaranteed box office poison.

I mentioned that in my review of the unprecedented movie which I admired enormously along with the singular actor who starred in it. It's a film about an older man who gets lost alone at sea and buffeted nearly to death by the elements at their cruelest.

After filming, the windswept, water-logged star came down with an understandably serious ear infection--so serious that he lost the majority of his hearing in one ear.

The film's hugely talented writer/director J.C. Chandor told Vanity Fair that Redford was such a health "maniac" while making the film that he also insisted on swimming laps every morning in the hotel pool before filming.

It is unwise to ever doubt Redford's integrity but we're talking about show business here, not an appointment to the Supreme Court.

Robert Redford, lost and found on the 30th anniversary year of filming ‘The Natural’ in Buffalo

I learned my lesson about Redford's integrity after the filming of "The Natural" was completed in Buffalo. I spent several days watching it being made. And then, after the final day of shooting, I spent an afternoon alone with Redford in his trailer while he answered questions and ate a fish lunch. The result remains one of the longest interviews ever published in The Buffalo News.

The moment that impressed me most is when I asked about the firing of a director on a movie of his. He told me the story--an extremely ugly one--but insisted it be off the record because he didn't want to make any more trouble than necessary for a talented colleague.

Redford has claimed that his new film "The Old Man & the Gun" will be his last as an actor (it is tentatively scheduled to open in Buffalo on Oct. 19). He has subsequently claimed during hemming and hawing and dodging that he's launching a "never say never" fusillade. Yes, he'll still direct films but acting--which, after all, cost him some of his hearing--is for others.

I mention this for two reasons: "The Old Man & the Gun"--like Chandor's "All is Lost"--is directed by a spectacularly talented young director. In the case of the new film, that is David Lowery whose "A Ghost Story" was one of the most surprising and amazing films I've seen in the last decade. (One of Chandor's previous films "Margin Call" was better than anything made about the stock market by Oliver Stone and Martin Scorsese.)

"The Old Man & the Gun" is about a courtly and elderly prison escapee and bank robber who has a romance with a woman played by Sissy Spacek.

That's what happens when the inventor of the Sundance Film Institute and Festival makes movies: he has his pick of perfect co-stars and the most talented young directors working. (His next to last film, "Our Souls at Night" from Netflix, co-starred his old pal Jane Fonda.)

I'm sure his final film is a charmer. Redford has had that franchise sewn up for decades. What I think needs to be re-thought is that "All is Lost" was a movie milestone that was treated, when it came out, as something obligatory and just a little north of business as usual.

You can chalk that up to Redford's integrity as a movie star. He'll sell his movies when absolutely necessary but it's not his thing. The result was "All is Lost"--whose title was guaranteed only to pull in Paxil-popping depressives if they knew nothing else about it--was the most amazing physical ordeal and action movie ever made in America by a senior citizen.

It's high time that everyone keeping score of such things step back and, in a chorus, say things like "wow" and "whoa."

Meanwhile, these days we're about to be treated to a couple more weeks of saturation hype for the 40th anniversary of one of the most influential low-budget movies ever made in America--John Carpenter's proto-slasher movie "Halloween."

Carpenter made it in 1978 in the mode of Alfred Hitchcock's "Psycho"--cheap, bloody, scary as can be and even starring the daughter of "Psycho" actress Janet Leigh. That was Jamie Lee Curtis who played the virginal babysitter in Haddonfield, Ill. who got the scares of her life while surviving the maraudings of Boogie Man Michael Myers, a psychopath who seemed to restrict his targets to the nubile and sexually active.

Immersing himself fully into Hitchcock's low-cost template, Carpenter virtually invented a hugely profitable film genre--the slasher film. Dozens of variations and their sequels tumbled forth. (My favorite "Halloween" offspring was Fred Walton's "When a Stranger Calls" with its immortal babysitter chill "the call is coming from INSIDE THE HOUSE.")

I must confess to being disappointed with Carpenter's subsequent lack of ambition, however good a time he had making things like "They Live" and "Big Trouble in Little China." The original "Halloween" was a tour-de-force. It made great use of Carpenter's music and two devices which should have become tiresome but, as the film went on, became the exact opposite. Killer Michael Myers was always either an unseen foreground first person voyeur of the doomed teens or the guy watching them in the rear of the frame while they weren't paying attention.

So now we have Jamie  Lee Curtis 40 years later playing the grown up former babysitter determined to rid the world of lunatic Michael Myers.

Carpenter and Curtis are executive producers, but Carpenter is otherwise not involved.

Buckle up. They're going to be selling the be jabbers out of this thing just about everywhere but your kids' orthodontist. It will open Oct. 19.

By all means try to guess the number of zeros in the opening weekend's box office. Make it a fund raiser for your church or school or favorite charity.