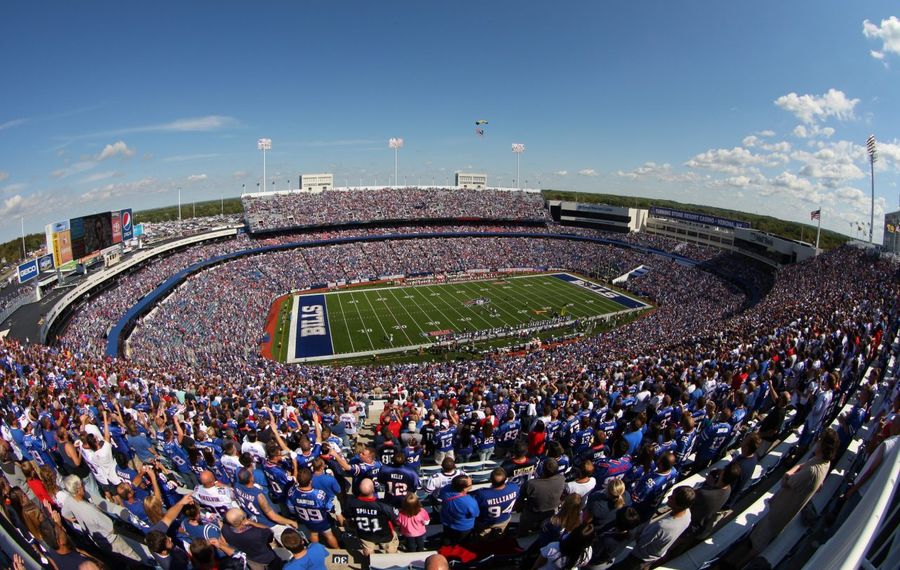 Erie County Executive Mark C. Poloncarz said the county is not looking to add a new Buffalo Bills stadium to the discussion of where to build a new convention center because the county can't afford it, and Bills owners Kim and Terry Pegula aren't demanding it right now.

"I think $1 billion is a low estimate for a new football stadium," he said Monday, adding, "You people are interviewing the Pegulas, and they’re saying they’re happy with where they are, and people don’t seem to be taking them at their face value."

The lease agreement with the county for the current Bills stadium will expire in five years.

"I still get people who come up to me on the street somewhere and say, 'Hey, are you going to build a new stadium next year?' And my answer is no. We don’t have the money for it. It’s not in the cards right now," he said.

Poloncarz pointed to price tags and cost overruns associated with other new football stadiums – including what Poloncarz called the "ridiculous" one in Los Angeles for the Rams and Chargers that is pushing $5 billion. Early estimates for a new Buffalo convention center alone range from $330 million to $430 million.

"I know everybody says, 'Oh, build a brand new football stadium. That would be great!' But how are you going to pay for it?" Poloncarz said. "We're borrowing in 2019 about $45 million. That’s a lot for Erie County because we’ve been averaging between $35 and $30 million over the last four years in borrowing for general infrastructure – $45 million is a lot of money. Four hundred million dollars is a heck of a lot more money. Add another zero and you’re in the billions. And I don’t think people understand."

Bills president and co-owner Kim Pegula told The Buffalo News in May that the cost might be too much for a new stadium to happen. At the time, she said, the organization continued to do “fact-finding” in an effort to examine the possibilities.

“I don’t even know if we can get there,” she said. “I know fans in Buffalo don’t want higher ticket prices, they don’t want PSLs (personal seat licenses). The state doesn’t want to give you any money, the city doesn’t ... We don’t have a billion and a half dollars sitting around. We used it to buy the team. … It’s going to be hard, so that’s why we’re trying to get all the options.”

Poloncarz said a future convention center-stadium combination would hamstring what kind of conventions could be hosted there.

"There are problems with football stadiums that are combo convention centers in the way they’re designed in that during football season you can’t use it for pretty much anything else besides football," he said. "So from August to basically December, it’s a football stadium and the vast majority of the stadium is used for football and the team."

He did not deny that the concept of a convention center and new stadium may have been tossed around as part of routine, ongoing conversations, but nothing serious, he said, especially in light of the millions the Pegulas have already invested at the Orchard Park location.