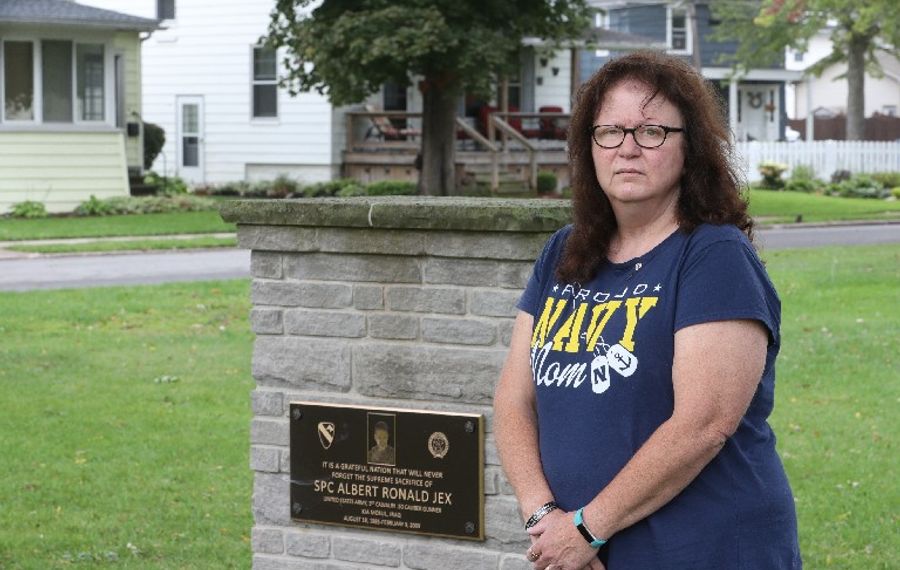 A plaque with his name in Lockport's Veterans Park honors his sacrifice.

But that doesn't sit well with Lockport veterans organizations.

They are trying to have the plaque removed and replaced with a more general plaque that won't commemorate Jex alone.

"The plaque was put up illegally," said Raymond D. Pierce, quartermaster and past commander of the Veterans of Foreign Wars post in Lockport.

"At Veterans Park, it's meant for units," said Michael L. Walker, active for years in several local veterans groups. "It's not for any individual person."

Representatives of the veterans groups say city officials disregarded their prerogatives by allowing the plaque honoring Jex to be erected in the city park. Now, with a new mayor in office, the veterans are raising their objections again.

And that angers Jex's mother and stepfather. 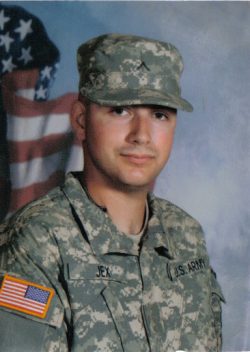 "What did I do, or what did Albert do, to them?" asked Jex's mother, Cathy MacFarlane.

In Lockport, in turns out, honoring a local soldier who died in combat has not been simple.

Jex, 23, was a private first class and a .50-caliber machine gunner when he died Feb. 9, 2009, in Mosul. He was posthumously promoted to specialist, an announcement made at his funeral, which drew a capacity crowd of about 300 to a Lockport church.

His family promptly began efforts to erect some kind of permanent memorial. The issue has been fraught with controversy ever since.

The Common Council rejected the family's suggestions to name the Stevens Street Bridge or some other infrastructure after Jex.

The eventual memorial, a granite bench made by Orleans Monument Co. of Lockport, was installed in 2013 on Locust Street across from the city's main Metro Bus stop. Two men who vandalized the bench in 2014 pleaded guilty to felonies. The bench, which had been paid for by businessman David R. Ulrich, was reconstructed and moved to Children's Memorial Park on Lincoln Avenue. City firefighters installed it and it remains there to this day.

In 2015, then-Mayor Anne E. McCaffrey and the Council agreed to a plaque honoring Jex at Veterans Park. 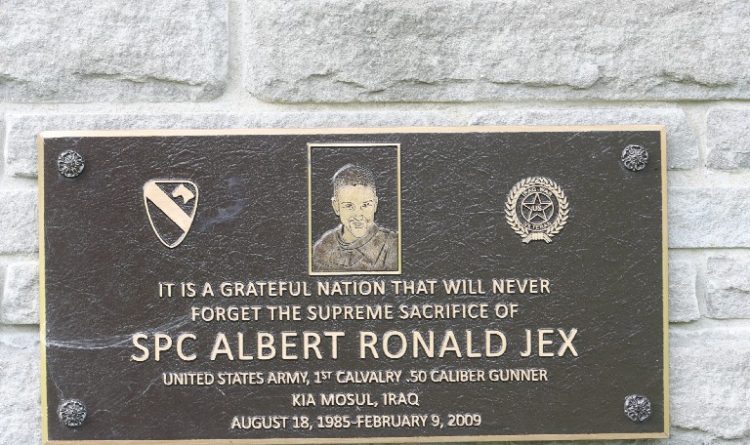 "They pushed it through without us even knowing about it," Walker said.

If that's the case, it seems to be an unwritten rule. City Clerk Richelle J. Pasceri said she could find no such restriction in city records pertaining to parks.

Walker said he is "going by what we've been told over the years."

Walker and Pierce said that if individuals are to be honored in the park, the three men with Lockport ties who were awarded the Medal of Honor should receive precedence. Today, their names are listed on signs at the major road entrances to the city.

There are names in the park. A plaque at the park's east end honors the first Lockport residents to die in World War I and World War II – Joseph F. O'Hearn and William J. Stamp. The main monument carries a plaque listing 26 Lockportians who died in Vietnam. Hundreds of bricks around the base of the monument were purchased in honor of individual veterans as a fundraiser for park maintenance. 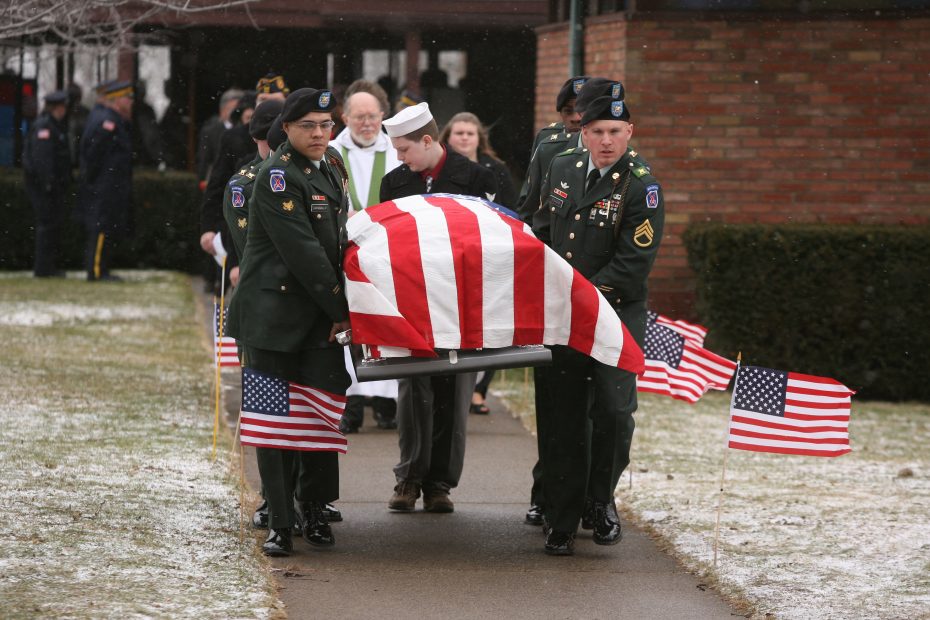 In 2015, McCaffrey and the Council overruled the objections to the Jex plaque from the American Legion, the Veterans of Foreign Wars and the Navy-Marine Club. The elected officials, however, agreed the veterans organizations would have a right to consult on any future changes in the East Avenue park, although the Council would retain final say.

Last week, the veterans exercised that right. About 20 veterans met Sept. 19. with McCaffrey's successor, Mayor David R. Wohleben, and they convinced him to take down the Jex plaque.

The veterans and Wohleben, who is a veteran, agreed to create a Global War on Terrorism plaque, similar to other markers in the park for World War I, World War II and the Korean and Vietnam wars. That marker would list the names of Jex and of Brian P. Weaver of the Town of Lockport, a sailor who died in a van crash while on liberty in Abu Dhabi in November 1990, during the buildup for the first Iraq War.

"I'm not taking anything away from" Jex, Walker said. "He died for his country. I'm giving him every credit as a veteran. But then you look at Weaver, who died over there, too. His mother never asked for anything."

Wohleben called it a "reasonable compromise."

"I can rule because it's my park, and I can make that happen," Wohleben said. "I want to make a compromise, and I think it's a reasonable compromise."

The mayor said he thinks he has the authority to implement the plan without a Council vote. He said he met with Cathy MacFarlane and thought she agreed with the idea. MacFarlane said she was keeping her thoughts to herself at the meeting.

The mayor asked Elaine Farchione, owner of Orleans Monument, to provide a price and design for a Global War on Terrorism plaque. Farchione said she at first told Wohleben she would do so, then changed her mind after Jex's parents objected, and finally decided to stick with her agreement with the mayor.

"This is a Veterans Park for servicemen that gave their lives fighting. That is exactly what the Jex soldier did," Farchione said. "To remove his plaque and put another one up adding the name of a soldier that was killed while on liberty from his ship, before a conflict started, while tragic, does not qualify him as killed in action. While I disagree with the mayor on replacing it, I will honor his wishes."

Farchione said she thinks the 2015 decision allowing the marker should stand.

"I also question why a United States veteran, a member of the VFW, does not want to allow this young man to be recognized for his ultimate sacrifice," Farchione said.

"To me, they're a bunch of good old boys' clubs," Bill MacFarlane said of the veterans organizations.

Cathy MacFarlane said she thinks the veterans groups have a personal problem with her, but she doesn't know why.

Walker said the veterans have no personal animus against the MacFarlanes.

"We're not trying to dishonor this man by any means," Walker said.

Meanwhile, Wohleben said the current Jex plaque will be held by Farchione until it can be placed at the city's planned Fallen Heroes Memorial. The city came up with that idea after the Council refused a request from a relative of the late Buffalo Police Officer Patricia A. Parete, a Lockport native, to name a park after her in the wake of her death in 2013 from an on-duty shooting six years before.

The new memorial is supposed to honor all locals who died in military, police or firefighting service.

A site in Outwater Park was selected five years ago, and a design that would cost about $500,000 was approved by a special committee. But fundraising has accomplished little.

Wohleben said he intends to scale back the design and get the project moving. Bill MacFarlane remains skeptical that memorial will ever be built.

"I'll probably be long dead and buried," he said.

Cathy MacFarlane said she'd like to see the veterans back off and keep things as they are.

"Just let it go," Cathy MacFarlane said. "Get over it, and life goes on."