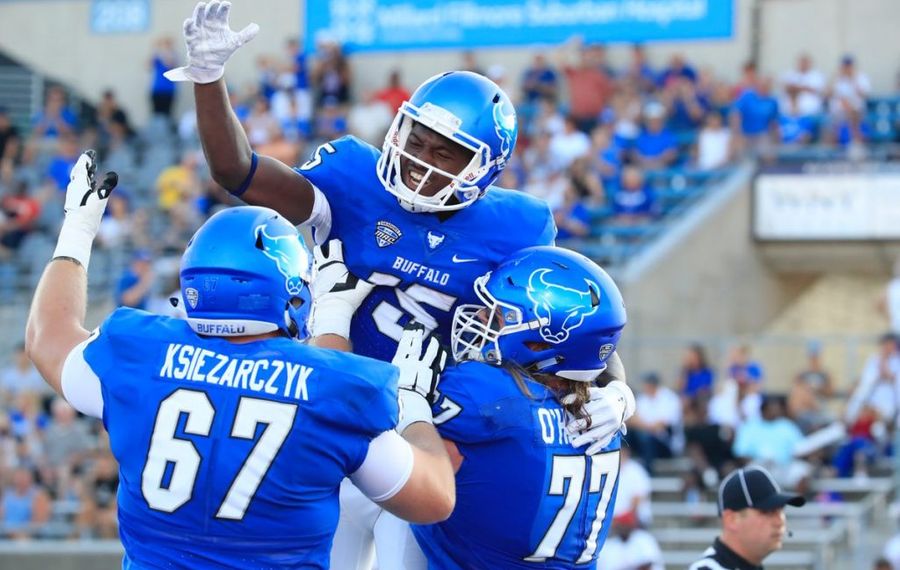 The University at Buffalo football team is becoming a noteworthy commodity.

The Bulls (4-0) host Army at noon Saturday at UB Stadium, and they are one of 21 FBS programs who entered the fifth week of the season with an undefeated record.

UB stormed through Rutgers last weekend, and earned votes in the Associated Press top 25 poll for the first time in program history. Yahoo Sports ranked the Bulls as one of “10 undefeated college football teams that aren’t getting any love.”

College football is taking notice of the Bulls as they look to go 5-0 for the first time as an FBS program. In turn, the Bulls are learning how to handle the attention.

The Bulls went 13-23 in Lance Leipold’s first three seasons as  coach, but Leipold hasn't drastically changed the tenor of his program now that it is winning. If anything, he has reiterated the value of details that have helped UB succeed this season.

“Now that you’ve experienced some success, you can’t forget the small things that helped get you there,” Leipold said. “Maintain the consistency without spending a lot of time looking in the rear-view mirror. We’ve got to stay focused. I told them, ‘I’ll probably be on you harder now about small things than I ever was before, because we’re not going to let it get away.’ ”

UB has won eight consecutive games dating back to Nov. 7, 2017, as it prepares to host the Black Knights. In that stretch, the Bulls became bowl-eligible with a 31-24 win against Ohio at end of the regular season in 2017 (but did not receive a bowl invite), earned its first win against a Big Ten Conference opponent, and quarterback Tyree Jackson has become one of the nation’s most prolific passers. He’s tied for third in the nation in touchdown passes (15) with Houston quarterback D’Eriq King and leads the MAC in passing yards average (263.0).

Leipold doesn’t plan to change much.

“Win or lose, the approach has to stay the same,” Leipold said. “You have to stay consistent in what you’re doing and what you expect if you ever want to maintain success. It isn’t like we changed, drastically, offensive schemes, defensive schemes, what we were trying to do, relying on a lot of trickeration and things like that to get us over the hump to try to win a game. Because those are short-lived. I would think our players would attest that we’ve modified things, like a practice approach or something like that, but the day-to-day things we expect of our guys, I don’t think that’s wavered.”

NOTES: Only general admission tickets remained Friday afternoon for the Army-Buffalo game, according to a UB athletics spokesperson. A limited number of tickets were also available on StubHub.com as of Friday, starting at $45 for general-admission seats and going as high as $100 for lower sideline seats in section 109 at UB Stadium. ... VegasInsider.com on Friday listed Buffalo as a 7.5-point favorite against the Black Knights (2-0), who lost 28-21 in overtime last weekend at No. 6 Oklahoma. ... UB will appear on national television on non-ESPN platforms in back-to-back weeks for the second time in two seasons. The Big Ten Network broadcast UB’s 42-13 win last weekend at Rutgers. CBS Sports Network will broadcast Saturday’s game from UB Stadium.