Critics of a city property tax break program turned their fire toward Benderson Development Co. Friday, demanding the Florida-based real estate company give up $5.9 million in subsidies it received for its One Canalside project in downtown Buffalo.

Known as "485-a" for the section of the state's real property tax code that created it, the program provides qualifying projects with a tax exemption for 12 years after the developer completes the work.

It was established to encourage adaptive reuse of vacant, underutilized commercial and industrial buildings in upstate cities — but has been criticized for a lack of oversight and public disclosure.

The lawmaker decried Benderson for seeking to qualify One Canalside for the benefit by incorporating a single 900-square-foot apartment in the eight-story building, along with a four-story hotel, restaurant and four floors of office space.

He and Sam Magavern, executive director of the Partnership for the Public Good, questioned if the apartment was even occupied on a regular basis.

In a news conference in front of the building at 125 Main St., Ryan called on Benderson to pay back about $2.3 million in exemptions the developer has benefited from and turn down the remaining $3.6 million it is still eligible for, over the next several years. 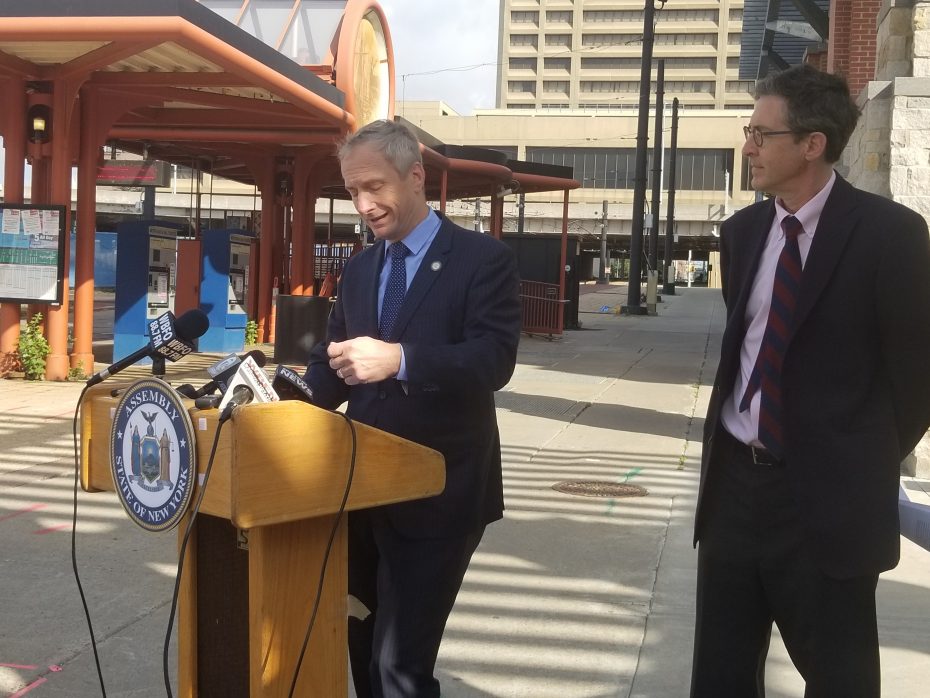 Assemblyman Sean Ryan, D-Buffalo, speaks at the news conference, along with Sam Magavern of Partnership for the Public Good.

"It seems obvious the one tiny apartment unit was added for one purpose only, and that was to collect generous subsidies from taxpayers,” Ryan said. “This project, it doesn’t fit the spirit or the intent of the 485 program.”

He and Magavern called on the city to stop giving out more benefits and to withdraw from the 485-a program. And Ryan called for reforms to state law to prevent abuses.

"We can’t allow this 485-a program to be used as a way for developers to shift their cost of doing business onto the taxpayers of the city of Buffalo," Ryan said. "Why are we asking Buffalo residents to pay an extra tax burden so the developers who own this building pay almost zero taxes? It doesn’t seem to make sense as a social or fiscal policy."

These tax breaks are popular with developers, but are they misused?

"Our One Canalside project would not have made economic sense without the use of the economic tools specifically designed to achieve the outcome which has been realized here — a successful redevelopment of a vacant commercial building," he said. "One Canalside is a shining example of a successful adaptive reuse."

Recoon said the apartment is occupied, but would not identify the tenant. He said the developer has not had to market the space, which has been used by "individuals who have a connection to the building or its tenants."

Recoon noted the former Donovan building had been "vacant and deteriorating for nearly a decade" and had been exempt from all real estate taxes for more than 50 years prior to Benderson's redevelopment.

He said the developer investigated the proper procedures and followed the rules that were set out before qualifying for the incentive. Benderson now pays $225,000 a year in taxes on the property.

"Ours was the first private sector investment in the entire Canalside District, and a catalyst for much of the momentum which has followed," Recoon said.

The 485-a program was created in 2002 to mimic a similar program in New York City. Buffalo, Syracuse and Albany opted to participate.

Critics like Ryan, Magavern and the Public Accountability Initiative said the program has been misused because developers manipulate the rules and cities allow it.

"After these projects are approved, there’s little or no oversight to be sure the building is in compliance with the program and it’s meeting both the letter and the spirit of this program," Ryan said. "We’re thrilled to see the development that’s been happening all around Buffalo, but we need to make sure that Buffalo taxpayers aren’t footing the bill for it."

These tax breaks are popular with developers, but are they misused?

In Buffalo, PAI issued a report last month that raised concerns about the tax break, which has allowed local developers to cut property taxes on at least 85 properties by more than $63.5 million over the 12-year life of the exemptions.

The report cited examples in which PAI said lucrative tax breaks were awarded on projects that qualified according to the letter of the law, while flouting lawmakers' intent. In one of those examples, Benderson renovated the Donovan State Office Building into One Canalside in 2013, spending $32 million.

The 175,500-square-foot building now includes a four-story Courtyard by Marriott hotel plus the headquarters of Phillips Lytle LLP, the law firm.

It's the inclusion of one apartment in the building that qualified the project for $5.9 million in 485-a tax breaks.

Ryan and Magavern said that appeared to violate the intent of the law, since it's such a small percentage of the overall facility.

"It’s not clear that it’s actually legal under the 485-a law," Magavern said. "Even if it’s technically legal, it certainly seems like a cynical misuse of the program to put one little apartment in a big hotel and office building and call it residential."

The project benefited from nearly $13 million in other state assistance, including $7 million in direct spending by the Erie Canal Harbor Development Corp. on brownfield remediation in 2008, $5 million in state brownfield cleanup tax credits from 2014 to 2017, and $900,000 in sales tax breaks from the Erie County Industrial Development Agency.

In all, more than half of the project cost was covered by government incentives.

"When the public invests money in things, it should yield a benefit for the community," Magavern said. "It should be providing affordable housing and quality jobs for city residents, not just padding the profit of wealthy developers."

Ryan noted the city has the authority to rescind the tax break if officials find it was improperly granted.

City officials have rejected the contention that there is inadequate oversight of the program.