A conversation with John Teerlinck takes an unexpected turn.

The legendary defensive line coach was a “football guy” in every sense of the phrase. Teerlinck’s coaching style was described by his son, Bill, as “hard.”

“He’s a yeller and screamer,” said Bill Teerlinck, who is in his first season coaching the Buffalo Bills’ defensive line.

So it was a surprise to hear John Teerlinck’s coaching style was molded by … 19th century German writer Johann von Goethe?

“So we tell everybody, you're great. Don't limit yourself,” John Teerlinck said. “I had John Randle and I got to present him at the Hall of Fame. He came to me his second year in the league and said, 'JT, will you make me a great player? I want to really be good. Will you help me be great?’ Hell yeah I'll help you be great. You want to take the poor players and make them average, the average make good and the good you want to make great. You want to get everyone playing at their maximum. If you can do that, no one can beat you.”

John Teerlinck is a legend in the assistant-coaching community, regarded by some as the best defensive line coach of all time. He coached in 32 playoff games, and won three Super Bowls (two with Denver in 1998-99 and one with Indianapolis in 2006).

"John Teerlinck is kind of like Mr. Miyagi," Randle said in a 2010 interview previewing his induction into the Pro Football Hall of Fame. "He's very unorthodox. A different breed. Rough around the edges. He tells you things that are funny, but they register if you just listen. That's why he's the guru."

“He's someone I've always looked up to. Him being my hero, you want to do what your hero does, and he coaches football,” Bill Teerlinck said. “I knew early that was something I wanted to do. He tried to talk me out of it, but it didn't work.” 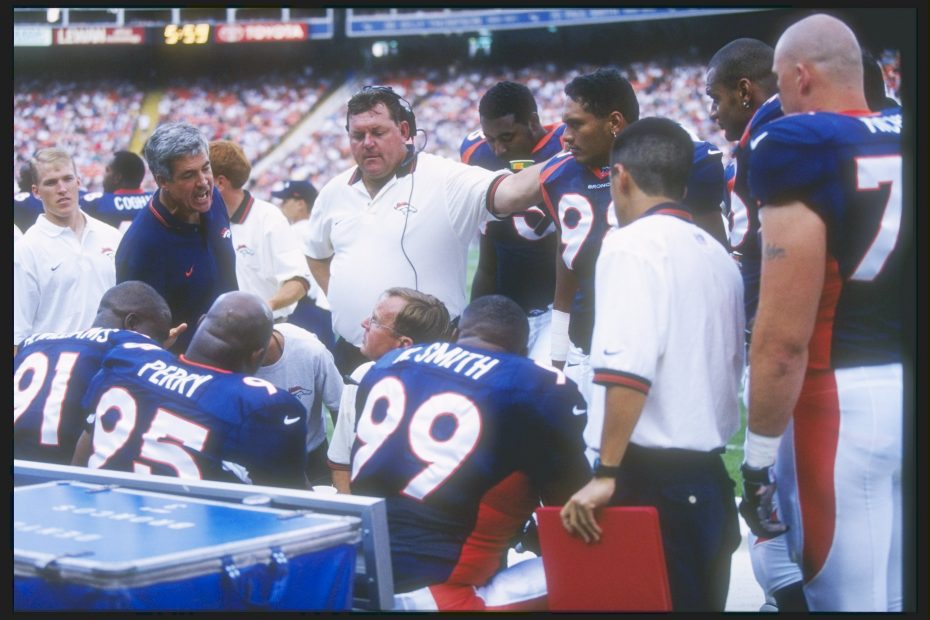 Defensive coordinator Greg Robinson yells to his players as John Teerlinck (center white shirt) of the Denver Broncos looks on during a 1997 game vs. the Buffalo Bills at Mile High Stadium in Denver, Colorado. Mandatory (Credit: Brian Bahr /Allsport/Getty Images)

John Teerlinck knew the toll coaching can take on a family, which is why he wasn’t sure he wanted that for his son.

“The hard part is the moving. I lived in about 15 different houses, so we moved all the time,” Bill Teerlinck said. “The longevity, the insecurities of the business — you've got to coach every day like it's your last. That's the industry. … My sister went to three different high schools. Every year there's the shuffle, and he tried to steer me clear of that, but it was all I knew. I just wanted to do what my dad did.”

Deep down, John Teerlinck knew he wasn’t going to be able to keep his son away from coaching. When Bill Teerlinck was a low-level assistant starting his coach career at Illinois State, John Teerlinck recalled a secretary saying of his son, “In 20 years, I've never seen a coach so optimistic, upbeat and energized, even when things go bad.”

“I said, ‘It's real simple — he's got no other thing to fall back on,” John Teerlinck said. “There's nobody in this family that has business, or a banker or a law firm that he can come back to. The only thing he knows is football, and he's got to win. It's the burn the boats thing, right? The only way back is to swim, so you damn well better get it done.”

'Get to the quarterback'

Bill Teerlinck jumped from Illinois State to the pros, joining his dad on the Colts’ coaching staff in 2007.

“I saw it when he was here,” John Teerlinck said. “He coached the defensive ends, which meant he had Dwight Freeney and Robert Mathis. … Both of them have over 125 sacks, they're both great, great players, and Bill coached them. I coached the tackles, he coached the ends, and I thought toward the end, he could communicate better to those guys than I could. I knew then and there that he was destined for really good stuff.”

Bill Teerlinck had an office across from his father's in Indianapolis.

“Coaching with my dad was another way to build the relationship,” he said. “At the office he was JT, and at home he was dad. Two separate guys. He taught me rushing the passer is the most important thing in football. Every play you've got to get to the quarterback.”

After spending five seasons with the Colts, Bill Teerlinck was out of football for two years before returning to the college ranks at Nevada. He spent three years there before joining Sean McDermott’s staff in 2017 as the assistant defensive line coach to Mike Waufle.

“We had a mutual friend he had coached with, and then coach Waufle, goes back with his dad,” McDermott said of why he added Bill Teerlinck to his staff. "He came highly recommended.”

When Waufle retired after the 2017 season, McDermott promoted from within.

McDermott first met John Teerlinck at the Pro Bowl when they were on the NFC (Eagles) and AFC (Colts) coaching staffs.

“You get around these guys, the whole Teerlinck family was there, and let's just say it wasn't a library where they were hanging out,” McDermott said. “You can see it in Bill now, just with his sayings. You can tell he's been around the game, that he's picked up some sayings from his dad. Being a coach’s son myself, I know the value in that.”

Bills fans who have spent any time at training camp may not recognize Bill Teerlinck by face, but they’ve definitely heard his voice. He provides the “juice” that McDermott so often refers to.

“The tone is set typically, in my eyes, from your special teams coach and your kickoff unit, your D-line coach and how they play, and then your offensive line coach, and how they play,” McDermott said. “That's really where you get the identity of a football team, the energy, the toughness.”

“I wake up every day and drink a bunch of coffee,” Bill Teerlinck said. “You've got to have energy. Coming here every day is not coming to work. It's going to hang out with the guys and coach football. It's not a job. We work long, but it's not a grind. ... With the hours, you've got to keep it light. Maybe part of my role is to keep it light. I keep it upbeat, I keep it friendly.”

Some of the most colorful personalities in the NFL are found among defensive line coaches. John Teerlinck has a theory on why that is.

“These guys are special. They're not offensive linemen who go underneath the shade tree or the salt block,” he said. “These guys are high-strung, temperamental — they go to their own drum. You've got to know how to massage them. Who needs a kick in the (expletive), who needs a day off, who needs extra work. They're independent contractors. They're not march and step guys. That's how D-line is. All the good ones have always been that way. They're free spirits.”

When he was breaking into coaching, John Teerlinck said the late Buddy Ryan told him a story about how, when the horse he had just bought broke through the fence and ran six miles away, he knew he had the right one.

“That’s the kind of D-lineman you want — wild, go for broke, hell for leather,” he said.

John Teerlinck was one of the first defensive line coaches to utilize speed rushers off the edge on an every-down basis.

“He was a trailblazer back then in that regard,” McDermott said.

Bills defensive end Jerry Hughes was drafted by the Colts, and spent his rookie year playing under both father and son.

“For the most part, it was head down, taking notes, trying to figure out what these guys are talking about, why they do the things they do,” Hughes said. "You can see why they're so successful. They're talking about it in the classroom. It allows us to play the game a lot faster, once we can understand how offenses are attacking us.”

Hughes and the Bills’ defensive line have come alive of late. Hughes alone had 10 quarterback pressures in Week 3 win over Minnesota. Along with Trent Murphy on the other side, the pass rush created all sorts of havoc for Vikings quarterback Kirk Cousins.

“Being around each other, building that trust, communication and the belief in the technique is getting better,” Bill Teerlinck said. “With trust in that, plays happen more. The system will take care of it. You've just got to keep hammering it every day.”

The Bills will need the pass rush to come through again Sunday. In Packers quarterback Aaron Rodgers, they’re going against a future first-ballot Hall of Famer.

After the game, win or lose, Bill Teerlinck’s first phone call will be to his father, who is retired and living in Indianapolis.

“Being around the guys, the locker room, the coaches, that tight-knit group is why I chose football. Sitting at a desk in a shirt and tie staring at a computer ain't for me.”