“Bleed Blue” is the rallying cry at West Seneca West. On Friday night, the Indians emphasized the other color in their scheme for a purpose that went beyond football fashion.

West Seneca West extended its winning streak to 20 games with a 40-14 defeat of Jamestown while recognizing childhood cancer awareness month with gold laces and tape on players and coach footwear to match the Indians' helmets and lettering on their royal blue jerseys.

“To all the kids around the world who are facing that, we felt like we were leading them tonight,” senior quarterback Maurice Robertson said.

The Indians, defending Class A state champions ranked No. 1 in the News’ large school poll and statewide, also encouraged fans to wear gold and donated admission proceeds from the game to the Go4theGoal Foundation, which provides supportive services to the families of children with cancer.

The cause is personal for coach Mike Vastola, who wore a wristband on the sideline in support of his 3-year-old cousin, Sammie, diagnosed earlier this year with brain cancer.

“It’s something I can’t even wrap my head around how terrible of a disease that is, especially when it afflicts children,” Vastola said. “We’re trying to take something that’s really terrible and use the power of a football team and a school community to help a person in need. And that’s what I think football is all about.”

Bryan Ball, who contributed 85 totals yards, a touchdown, interception, fumble recovery and blocked field goal to the victory, said knowing how pediatric cancer has affected the Indians’ coach “motivated us a lot to get this win.”

“It was very emotional for us,” said senior Kyle Haettich. 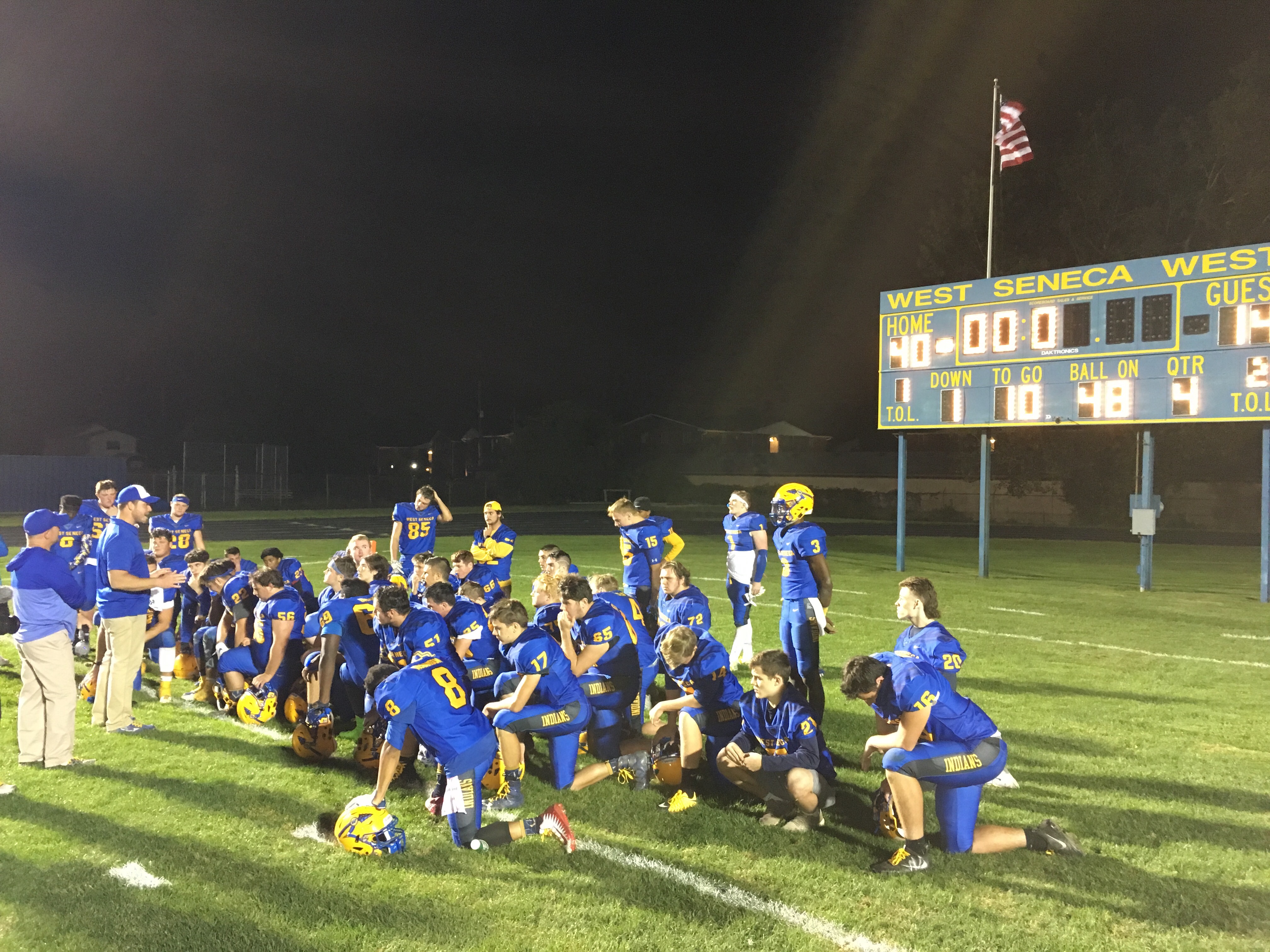 West Seneca West (5-0) produced a season-high 555 yards but the 26-point margin was its closest of the season. Coming in to the game, the Indians had outscored opponents 166-8.

“It was good to get tested,” said Haettich, who caught three passes for 85 yards and two touchdowns.

“We needed a little adversity,” Ball said. “We needed this to prepare us for the upcoming games.”

The No. 1 Class A team in the state boasts the longest local winning streak in WNY, a 20-game run that started with two matchup contests at the end of 2016 and matured into last year’s 13-0 championship conquest.

Tallying up the victories, Vastola quoted former Michigan coach Bo Schembechler: “If somebody tells you you’re good, kick them in the shins.”

“It’s sure nice,” Vastola added. “But we can’t start reading our own press clippings or care about rankings, because the only ones that matter are the ones at the very end.”

In his postgame speech, Vastola told the Indians they “had a great month of September. But it means nothing come October.”

“I’m proud of the way we started but it’s all about how we finish,” Vastola said. “October is when you can make your season or break or your season. We are going to face our toughest opponents coming up, and hopefully in the playoffs if we take care of our business, and we have to be ascending now.”

WSW started strong against Jamestown, taking a 21-0 lead in the first quarter on Ball’s 60-yard scoring scamper and Robertson’s 27-yard touchdown pass to Juston Johnson and 19-yard hookup with Haettich.

Jamestown’s Drew Boggs threw a 19-yard touchdown to Jeffrey Seaver with 1:10 left in the first half. It was one of four straight drives into the red zone for the Red Raiders, but the only one they scored on. The others resulted in two missed field goals and a turnover on downs.

Robertson was 13 of 23 passing for 190 yards and three touchdowns, with 65 rushing yards and a lost fumble, in his third full game at quarterback following a late-August transfer from Sweet Home that delayed his integration into the Indians' offense.

“Maurice is fun because he can go the wrong way and still make a play,” Vastola said. “He’s still a little behind the eight-ball in terms of our system, but every day it’s trying to get him going at the basics, and then on Friday night watch the fireworks.”

“It was difficult at first,” Robertson said, “but I’m very comfortable now.”

Robertson attended Bishop Timon-St. Jude before Sweet Home, but grew up playing Little Loop football with many of his current teammates, including Johnson, Ball and Haettich.

“I’m happy to join this team,” he said. “This is my family. They are my brothers, like we come from the same parents. I love them to death.”