She promised this week to serve as an interpreter in a cross-country interview with William Schwall, and there he was. Schwall's image appeared Wednesday on a screen in a conference room at St. Mary's School for the Deaf. He leaned forward in an easy chair in his living room in Texas, wearing a smile of reflection about the way the world has changed, while his curious dog moved in and out of the picture.

Aimee Bell, the school's associate principal, and Kristin Miller, a social worker, were at the table in Buffalo to help maintain a web of three-way conversation. Rohring and Schwall are both deaf, and the room was busy with a chain of sign language conversation that began with my spoken question and ended with Miller interpreting Schwall's response.

Schwall, a 1957 graduate of St. Mary's, is one of 19 alumni, staff, students and parents who were honored at Thursday's annual St. Mary's awards dinner, held this year at Canisius College. After a childhood spent on a farm in Illinois, Schwall came to St. Mary's for high school in 1953 and quickly emerged as one of the best scholastic basketball players in Buffalo.

His time at St. Mary's was a revelation, said Schwall, who arrived in Buffalo on Thursday for the banquet. His high school years helped him to realize "that were a lot of people like me out there, and I really valued that connection." Schwall would go on to play for an American team that won a gold medal in what were called, at the time, the International Games for the Deaf.

Yet the greatest power of his example — at least to officials at the school — lies in the everyday life he later built, in Arkansas.

As a child, Schwall's father was so concerned that being deaf might isolate his son that he talked about leaving him the farm, so he would always have a place to work. Schwall was grateful, but farming was not for him. According to documents collected at St. Mary's, Schwall may have been the first deaf person to ever serve as a telephone installer within the old Bell Telephone network, which once stretched across the nation.

With today's technology, with iPhones and texting, that achievement might not convey appropriate awe. Decades ago, in a different era, at a time when people depended on the ringing and dial tones of landlines, it was an extraordinary accomplishment. Without hearing, Schwall devised a technique, using specialized equipment, in which he could communicate with his supervisors after installing a residential phone, thus making sure it was in full operation. 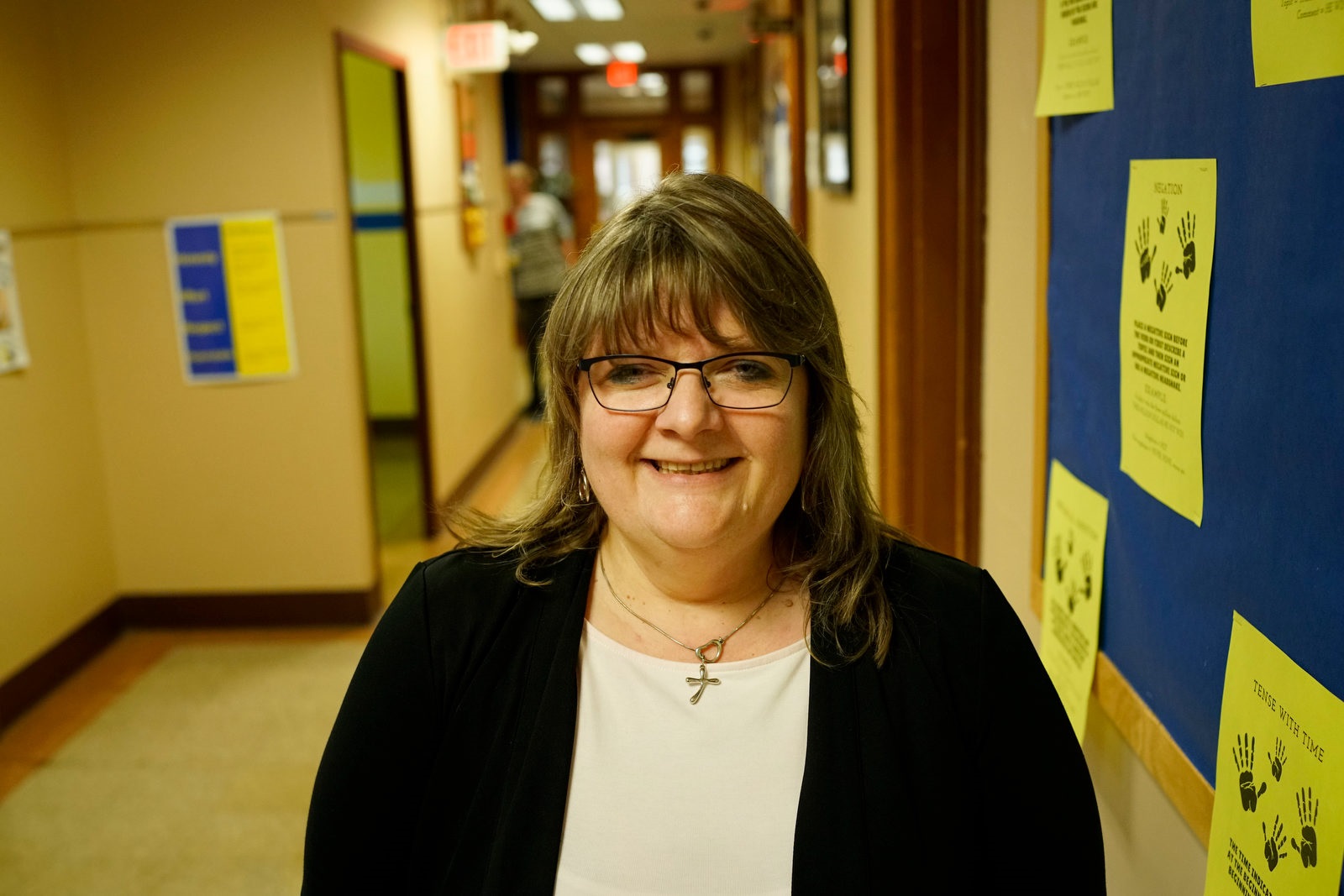 Teacher Pamela Rohring in the hallways of St. Mary's School for the Deaf. (Derek Gee/Buffalo News)

The man who hired him was blind, a guy whose confidence in what he accomplished himself might have led to his faith in Schwall. Once he started, Schwall remembers disproving the skepticism of a supervisor in the field who "didn't think I could do anything."

He eventually retired after a full career. At 80, his name will now go up with other honored alumni, collected over many years, on a school wall at St. Mary's.

It is in a place easily noticed by worried parents when they first walk in with their infants. Often, they arrive after just learning their daughters and sons were born deaf, a time of uncertainty about how life might turn out for their children.

Both Rohring and Tim Kelly, superintendent of St. Mary's, said the list of names — which includes educators, lawyers, business people and others who have carved out professional success — is meant to send a reassuring message, both to families and students.

"These kids can see their dreams are possible to achieve," Rohring said.

That confidence is based on the way she lived out the story. A year ago, Rohring was the recipient of an honor at the banquet: She was given the "heart and soul award," named for Sisters Virginia and Loretta Young, now both 87, identical twins who dedicated much of their lives to the school.

"She is revered by our students," Kelly said of Rohring, whose specialty is teaching American Sign Language. He described her as "the spirit of St. Mary's," an educator whose status transcends even her significant role in classroom education.

In addition to her duties with the children, she teaches — or helps to polish — sign language for other staff members and for emergency responders in the larger community. She has helped interpret for deaf refugees when they arrive in Buffalo, men and women from abroad who often use dramatically different forms of sign.

She is also co-chairperson, with Melissa Lackey, of the Deaf Awareness Month activities that culminated in this year's dinner. It is her job to reach out to alumni like Schwall, both to inform the honorees of their awards and to offer whatever help she can provide in bringing them home to Buffalo.

Technology has made those duties more convenient. With Bell interpreting, Rohring agreed it would have been impossible to imagine, during her childhood, the kind of digital support now readily available to deaf Americans, such as the video phone connection with Schwall, across so many miles.

"I think," Rohring said of her trajectory, "God has a plan and a purpose."

She was born in Lockport with full hearing and retains a faint memory of sound. Rohring became deaf after enduring a high fever as a 3-year-old. But children are resilient, and for a few days the nature of what happened was not evident to her family.

Rohring said her sister Judy was the first to make the realization. She noticed how Rohring, while on a swing in their yard, did not respond when her name was called repeatedly, by their mother. 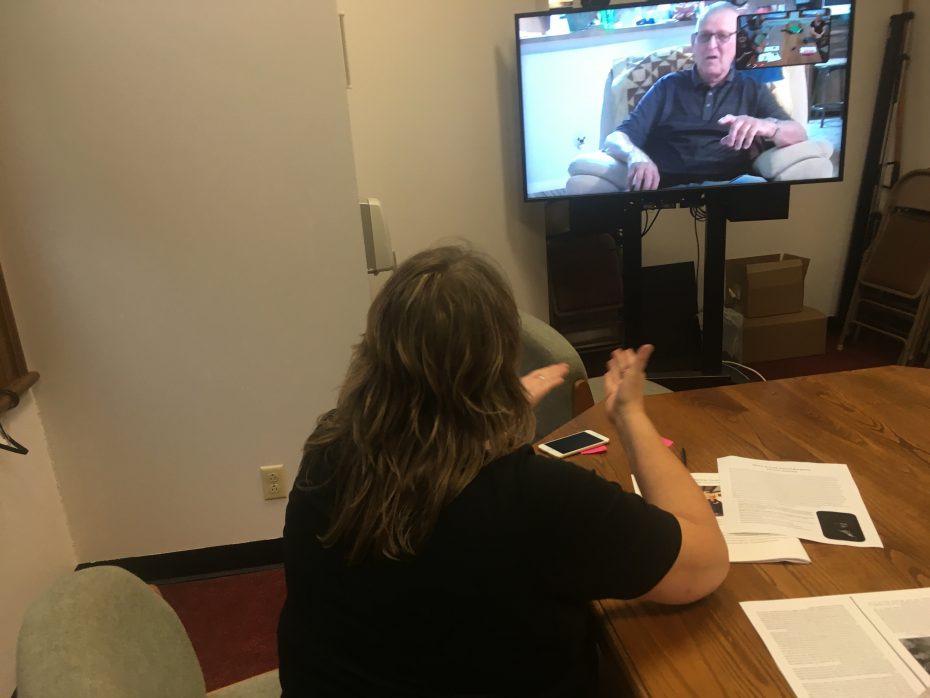 Pamela Rohring, a teacher at St. Mary's School for the Deaf, in a video phone interview with William Schwall, an honored graduate. (Sean Kirst/The Buffalo News)

Once they understood the situation, her parents — Ronald and Helen Rohring — were supportive. When their daughter was 5, they brought her to St. Mary's. They did whatever was necessary to help her commute to class each day from their farm in Cambria. Asked about gratitude toward the school, Rohring responded: "Everything that's important with my life is here."

She offers one pivotal example. From St. Mary's she went to Gallaudet University, a school that serves the deaf in Washington, D.C., where she struggled scholastically as a freshman. Rohring shared those fears in a letter to Diane Gonzalez, who still teaches at St. Mary's.

The following summer, Gonzalez voluntarily tutored Rohring, helped her to feel academically prepared once she returned to college. More than 30 years later, the two women are now colleagues who co-teach a class at St. Mary's. Rohring said that kind of example, that inspiration, allowed her to succeed.

Despite her accomplishments, this has not been an easy year. Her mother died four months ago, at 95. Rohring said it is hard to describe the magnitude of the loss. Helen Rohring never forgot how much her daughter loved music in the brief time before the child contracted the fever that claimed her hearing.

Even afterward, Helen used to allow Rohring to play with a piano when they visited a relative, believing in some mystical connection involving music that mattered beyond sound.

"My mother was my best friend," Rohring said. "She wanted her daughter to be successful."

A few years ago, conscious of her own mortality, Helen Rohring made a request. She asked her daughter if she would perform "Amazing Grace" at her funeral Mass, entirely in sign. When the moment arrived, even some of those closest to Rohring wondered if the grief involved with such an effort might be be too overwhelming.

As for Rohring, she had no doubt. In a moment that Tim Kelly described as one of the most powerful tributes he has ever witnessed, Rohring completed the entire hymn from the pulpit, growing in strength as many followed her in sign. At a time of such emotion, in a way that has defined her life, she went beyond what anyone expected her to do.

It is why she wants the names of alumni, on the wall.