My quick answer: IF we end up with a milder-than-average winter, it probably will have little to do with El Niño. And, when all is said and done, the winter may not end up being milder.

El Niño occurs when westerly winds across the tropical Pacific push the warmer waters more often found in the western Pacific toward the east central or eastern Pacific. When this typically large plume of warmer waters moves east, the warmth releases more heat and moisture into the atmosphere above it, triggering more convection. This shift of heat energy, moisture and convection can alter upper air patterns, eventually downwind around the globe. The more powerful this eastward shift of heat, moisture and convection, the greater the regional and global impacts from El Niño. 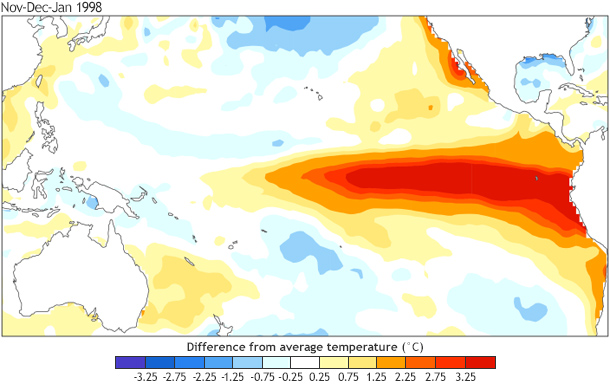 ENSO can often be predicted months in advance, at least on a coarse scale. But the MJO, NAO and AO aren’t very predictable much more than a couple of weeks in advance. Their individual strengths/amplitudes vary more frequently and can have every bit as much of an effect on our weather – especially in the cold weather months – as most El Niños. It is the very strong El Niño that is one of the very few red-flag signals from nature that offer greater confidence for a winter outlook.

We do not have such a red-flag signal now, and we’re not going to get one. Model data suggests an El Niño will occur looking like this one: 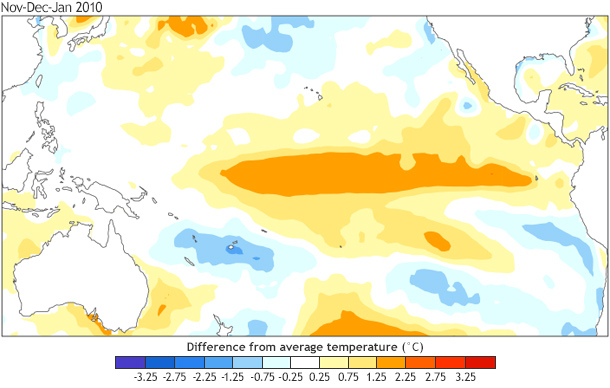 What those colors represent is a somewhat weaker El Niño, which shifts position over the course of the months, with more of the heat energy focusing over the central Pacific, rather than the eastern Pacific. A weaker El Niño is not associated with a milder inter in the Great Lakes.

Robert Hamilton, the lead forecaster at the Buffalo National Weather Service, has done research over the years that leans toward the opposite of El Niño warmth when ENSO is weak or neutral. The crux of his findings is evident in this 2014-15 Winter Weather Summary from the Buffalo NWS:

“Once again, the proverbial ‘writing on the wall’ for a harsh winter may have been in place during the immediate preceding months of September and October.  A weak El Niño was already in place across the Equatorial Pacific with a forecast of similar conditions for the ensuing winter months. Climatologically, Western and North Central New York have typically experienced their coldest winters during weak ENSO events, particularly during weak El Niño’s when our weather is more susceptible to the influences of high latitude blocking."

A weak ENSO/El Niño leaves us more vulnerable to the variables offered by the other oscillations I mentioned, and the shorter fuse predictability of the very important Arctic and North Atlantic Oscillations for eastern North America.

Late in my professional life, I have become less of a fan of doing winter outlooks. Some of you may think of that as cowardice, but it is having knowledge of the growing number of variables, and the still poorly understood connections between those variables and their interactions. If you’re a gambler, place your bets elsewhere than on winter outlooks. One organization, however, has a congressional mandate to take its best shot, whether its confidence is moderate or ground-level low. Here is what the NWS Climate Prediction Center/CPC is currently projecting for temperature probabilities November-February:

That’s a weak probability of above-average temps for us into and through much of the winter.

Me? My noncommittal first guess is we may start mild, but the probable weaker state of ENSO and its central Pacific location leaves the gate open for shots of wintrier weather later on in mid- or late winter. The seasonal mean for the winter by next April may be milder than average, or less snowy than average. But I doubt we will end up with a winter much like 2015-16. I don’t think we’ll be getting off that easy.

In the meantime, there are good indicators of a chillier-than-average pattern arriving as we move closer to mid-October.