Three days after Robert Steger died in 2014, his son, Craig, called his mother.

"What do you want to do tonight?" he asked.

It was a Monday, the day the Steger children used to take their parents to Anderson's for ice cream. Mother and son decided the ice cream shop was out, but dinner would be nice.

And a tradition was born.

They've been going out to dinner on Monday evenings ever since that night 200 weeks ago, 200 meals ago.

"Monday night is all about you now," Steger told his mother, Jackie, who turned 90 this year and is living in an assisted living facility in Amherst.

Sometimes his brothers and sisters join them, like they did for the 200th restaurant last Monday. But usually it's mother and son, enjoying a simple meal together.

"The first couple times we went to places she and Dad went. It was a short list," Steger said.

Robert F. Steger and the former Jacqueline M. Burwell met roller skating when they were teenagers.

"I think it was 'Kentucky Steal'; you start skating with a guy and the guard blows a whistle and he moves up to the girl in front and introduces himself," she said.

The couple went on to raise six children, 12 grandchildren and four great-grandchildren. He was a lithographer and she worked in the back office at a Kmart and in the corporate offices of Empire Bank.

The first repeat dinner for mother and son popped up after the first month and a half. That's when they decided to go to a different place each time, and it became a loving project Steger has spent hours putting together. The recently retired scientific department administrator at Roswell Park Comprehensive Cancer Center started a database of each restaurant they visited, complete with links to their websites, driving directions and mini review. If he was not familiar with one, he would research it to see if it would be acceptable.

They had to be open Mondays. They had to offer traditional fare, something Jackie Steger would eat, no spicy foods. And it had to be within a 45-minute drive of her apartment.

His list has grown to more than 300 additional restaurants to visit, and he usually does not decide where to go until he goes to pick up his mother. They have been as far south as Hamburg and as far north as Lewiston. He said he gets many of his ideas from Gusto, Buffalonews.com, Buffalo Rising and suggestions from friends. 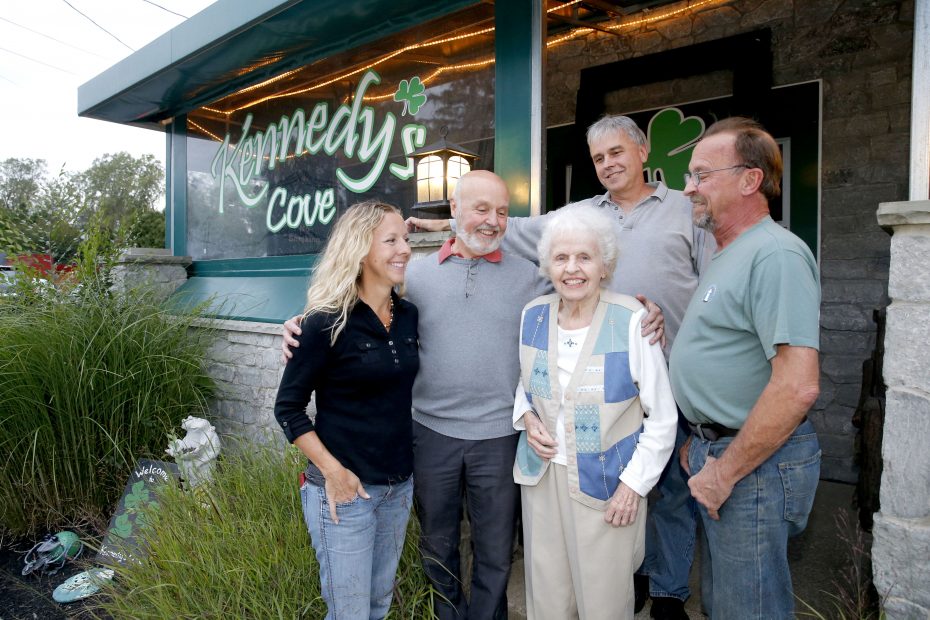 Monday she knew in advance: Kennedy's Cove in Clarence. She ordered a tenderloin steak sandwich on a hard roll.

Family get-togethers are a way of life for the Stegers, who raised five sons and one daughter. Three sons in the Buffalo area, Craig, Brian and Bob, used to bowl every week with their father, then got together with their parents for pizza, wings and Pepsi every Wednesday at one of the sons' home in Clarence. When their father went into a nursing home, they continued the tradition. And when he couldn't leave the facility anymore, they brought the pizza and wings to him. They still take Jackie Steger out for pizza and wings on Wednesdays.

The family grew up in Clarence, where Robert Steger, his father-in-law and other family members took six years to build a 2,000-square-foot brick house. The family moved there in 1960, and the house had a $5,000 mortgage. Jackie Steger documented the progress with photographs, writing the date and description on each one.

Vacations were at rustic cabin in Letchworth State Park.

"We didn’t have much, but we had a great life," Craig Steger said.

When they get together on Wednesdays, Steger gets out a box of old photos. Jackie Steger looks through them, often filling in details. Steger writes the new information on the back of the pictures.

Next Monday, mother and son will be back to dinner.

"It's one cool way of having an in-town adventure. She eats a sandwich," Steger said. "For the cost of sandwich, I’m having special times with my mother. Everybody can do this."