Elaine T. Blyden was born in Buffalo and lived her whole life here.

She also dedicated herself to making the city a better place, especially for children in the city's black communities.

An observer during the Attica prison uprising of 1971, Mrs. Blyden was the local office staff director for state Assembly Speaker Arthur O. Eve, a former managing editor of the Buffalo Challenger newspaper and longtime president and CEO of the Bob Lanier Center for Educational, Physical and Cultural Development on Hempstead Avenue.

Mrs. Blyden died unexpectedly Sept. 22 in her Buffalo home. She was 80.

"The City of Buffalo has lost one of its true champions," said Mrs. Blyden's daughter, Kelly Clark, who added that her mother's circle of friends included "the entire City of Buffalo."

Clark said that a granddaughter who lived with Mrs. Blyden while attending Buffalo Seminary "would always remark that they couldn't walk 3 feet inside of Wegmans without somebody stopping Grandma and having a conversation, then they would go another 10 feet and there would be somebody else that Grandma would start talking to."

The former Elaine Clark was born in Buffalo, the third child of Thelma Amelia (Grinage) and William Lawrence Clark and the sister of Judith, Dennis, David and Barry Clark. Her father was a chemist at Bell Aerospace; her mother was an original "Rosie the Riveter" at Curtiss-Wright and worked at Twin Coach. Mrs. Blyden graduated from Lafayette High School.

Her family described her as a "servant leader" and "a believer in political empowerment and self-determination." A political observer during the Attica uprising in 1971, she met Herbert X. Blyden, who had emerged as an inmate spokesman, and they married in 1975. 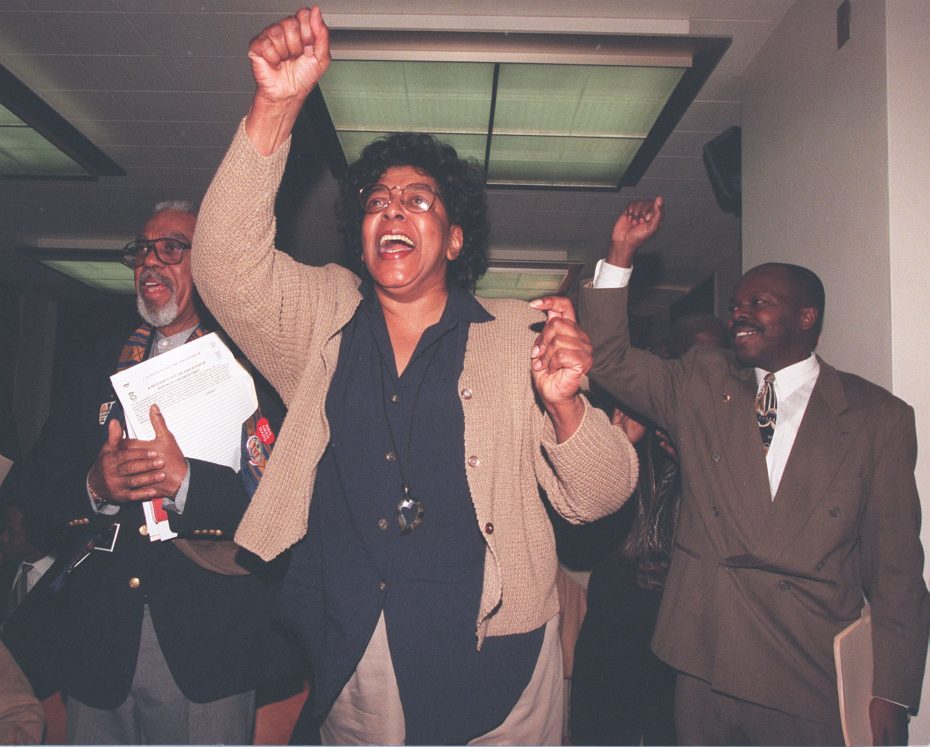 Elaine T. Blyden, a member of the search committee that recommended hiring Dr. James Harris as superintendent of Buffalo Public Schools in 1996, leads a cheer in March 1999 when Harris announced he would rescind his resignation. (Buffalo News file photo)

In 1972, Mrs. Blyden was a delegate to the historic National Black Political Convention in Gary, Ind. She was managing editor of the Challenger newspaper in the 1970s, then worked for years as district office staff director for Deputy State Assembly Speaker Arthur O. Eve.

As a child, Mrs. Blyden joined her family in the Lutheran Church of Our Savior at Northland and Purdy streets. Through the years, she was active in the church, serving as board president and in many other roles. Her family said that in recent years, Mrs. Blyden was one of the few remaining members who recalled the church's move to Brunswick Boulevard in the early 1960s. Mrs. Blyden was working to preserve the history of the church, said her son, Malik. "That was the last work she was doing for the church, just weeks ago," he said.

From 1993 until it closed in 2013, Mrs. Blyden led the Bob Lanier Center for Educational, Physical and Cultural Development, which offered after-school and summer programs for young people. Known as "Miss Blyden" to thousands of young people who relied on "The Bob," she functioned as “mom to the community,” her family said.

Mrs. Blyden was a member of the search committee that selected Dr. James Harris as superintendent of Buffalo Public Schools in 1996, and in 2000 served as interim chairwoman of the board of directors of the Geneva B. Scruggs Community Health Care Center.

Among the awards Mrs. Blyden received were a 1990 honor for outstanding community work from the Agape African Methodist Episcopal Church and, in 2006, being cited by the St. Philip's Community Center Parent Council as one of 50 local Women Builders of Communities and Dreams. Mrs. Blyden also worked to save a group of early 19th Century Queen Anne row houses on Emerson Place.

Her family noted that while Mrs. Blyden was active in the public arena to help the city's children, she was also a warm, maternal presence in the neighborhoods where she lived. She welcomed her children's friends into the family homes on Cambridge Avenue and later Landon Avenue.

"She was truly the mighty oak of the community, providing fun, shade and comfort to all," her family said.

Besides her daughter and her son Malik, Mrs. Blyden is survived by another son, Herbert Jr.; her siblings Judith, Dennis and Barry Clark; and six grandchildren.

The family will be present starting at 11 a.m. Tuesday, Oct. 2, in the Lutheran Church of Our Savior, 26 Brunswick Blvd., followed by a home-going service at noon. Memorial contributions may be made to the Elaine T. Blyden Fund for Buffalo Youth on GoFundMe.com.