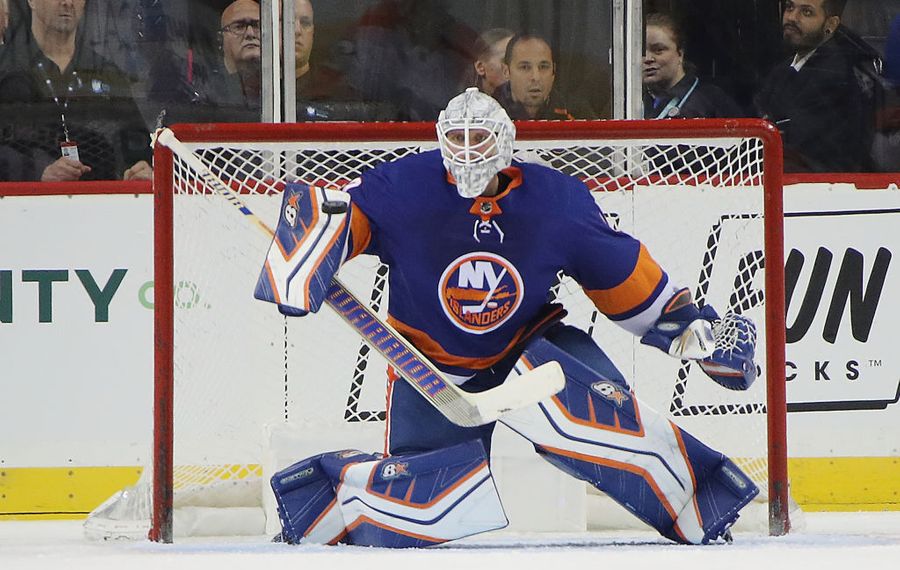 OSHAWA, Ont. — The wild hair is cropped short and the beard is gone. The Lou Lamoriello rules, you know. There's definitely some weight taken off as well.

On the outside, Robin Lehner looks quite a bit different. Especially in uniform, the New York Islanders sweater looks a little odd.

Dressed in his neat blue suit and looking noticeably trimmer early Friday afternoon, Lehner smiled and seemed more subdued than he normally was during all those chats we had in the Sabres' dressing room the last three years.

He's living day to day, trying to feel quite a bit different on the inside as well.

A lot has gone on since the last time Lehner was seen around the Sabres in the final days of March. His sudden disappearance from the team for the rest of the season was explained away as an out-of-town second opinion for hip problems.

As it turned out, of course, it was much more than that.

In a riveting first-person story written earlier this month for the Athletic, Lehner revealed he left the Sabres because he was diagnosed "bipolar 1 with manic phases" and traveled to The Meadows, a suburban Phoenix facility, for treatment of alcohol abuse. Lehner revealed in the story he has suffered from ADHD, PTSD and had been suicidal. He also made the stunning admission he had never played a hockey season sober. 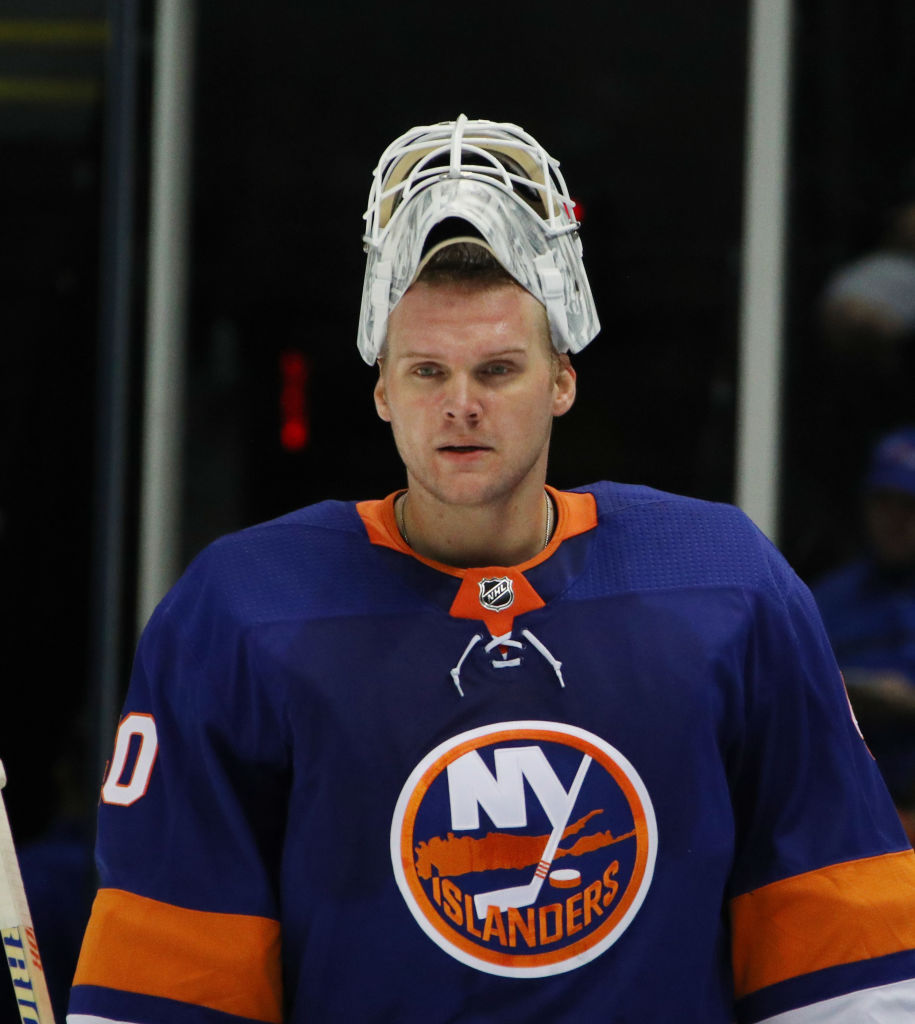 It's a new look for Robin Lehner this season with the New York Islanders (Getty Images).

Lehner said Friday that he initially had trepidation about sharing his story. As it turned out, the reaction has been swiftly in his corner. His Facebook feed has lit up like a pinball machine.

"I've gotten like 600-700 messages from people suffering in the same ways, all looking for support," Lehner told The Buffalo News a few hours before starting in goal against the Sabres in the preseason finale at Tribute Communities Centre. "Most of these are people I don't know, whom I've never met, saying they're having the same feelings, the same experiences.

"And I don't know many letters I got from people who said they got help, they were encouraged to get help from their family. Even if there was just one of those, I would have been happy with it but there have been many, many more.

"I want to build on this. I will do something charity-wise and help the people who don't have the luxury I have. I had the luxury of being in a great program and having the NHL to take care of me. I know lot of people don't have the ability to go and get the right help."

Lehner wanted to tell his story and knew the Islanders would support him. Still, he only has a one-year contract and wondered how the rest of the league would react before ultimately moving forward.

Good call. There are bigger things in life than hockey.

"It took a lot more than people might think for me to put it out," he said. "I didn't know if it was going to affect me good or bad and I really don't know how that's going to affect me in the future with contracts, other teams, other GMs, whatever the case may be. You don't know how my future in general will be. Knowing that, will people want to commit? That was how it was in the beginning and it still is a little — but I have zero regrets doing it."

The Islanders needed help in goal and Lamoriello, the new GM, was willing to take that risk. So was new coach Barry Trotz, who is coming off a Stanley Cup win in Washington that gives him a lot of equity in his new job.

"Since I got here this summer, there has been a very good attitude," Lehner said. "Barry and Lou are bringing a lot of it. Attitude and structure are important to them. We have a lot of character guys in here and since camp started everyone is working so hard. The work ethic and intensity has been there on and off the ice at a very high level."

Lehner said he was looking forward to playing against the Sabres, although it was going to be weird seeing them on the opposite side of the ice. He heard from ex-teammates and several members of the organization through the summer and is particularly grateful to General Manager Jason Botterill for staying in touch with him, even though the Sabres walked away from Lehner's contract as a restricted free agent.

"Botts and I got along from day one. The team didn't do anywhere near what we wanted to do last year and that was frustrating but he's such a good person," Lehner said. "When this all happened to me, he was incredibly supportive from the first second he saw me. He never once worried about the hockey aspect. He just worried about me.

"Throughout the summer, he's been great. The first time he called, it wasn't a surprise. I knew he's that kind of person. It shows his character and it's not just him. (Goalie coach) Andrew Allen made sure to call and the team and organization in general were great to me. I appreciate that."

Lehner is sharing the Isles' net this year with Thomas Greiss. He started Friday's game with a 3-1 record in preseason although his numbers (2.83 goals-against average and .889 save percentage) were pedestrian.

"Robin has had a pretty good preseason," Trotz said. "Both our goalies are learning. There's new terminology, different ways of looking at it and different expectations from the past in terms of what think they can do. They're working."

Minus John Tavares — even though they added the Stanley Cup-winning coach and a legendary, Cup-winning general manager — most observers don't see the Islanders going anywhere. But their roster still has Calder Trophy winner Mathew Barzal and they entered Friday's game with a 5-2 preseason record and winners of five straight.

"I don't see it like that at all," Lehner said of no one expecting much from the Isles. "Every NHL team has some kind of pressure from within, from their fan base. What everyone else thinks is something we don't pay attention to. We want to have a good season and we feel like we have real possibilities with some of the guys we have in there and with the coaching staff."

"From the outside, I'm glad no one thinks that we can do anything," the coach said. "From the inside, we know we're going to do something."

Winning is an attitude. Before he finally lifted the Cup just over three months ago, Trotz had piled up 762 regular-season wins with the Capitals and Nashville Predators. When he gets No. 21 this year to hit 783, he will pass Islanders legend Al Arbour for No. 4 on the all-time list.

Lamoriello, of course, won three Cups in New Jersey and it was ultimately his decision to take a chance on Lehner to allow the goalie to continue his career.

"He gives you a tremendous amount of respect as a player and it's very easy for me to give this back to him," Lehner said. "He's an incredibly good person. You promise to give him everything you've got and he'll give you everything back. It's refreshing for a player and that makes this a very good restart for me."