A summer of change blindsided the Buffalo State men's soccer program after the Bengals made their first trip to the NCAA Tournament since 1984.

Head coach Mark Howlett, twice named the SUNYAC Coach of the Year in his five seasons at the helm, unexpectedly accepted a coaching vacancy at Geneseo, citing family reasons.

The sting of his departure went beyond the two award plaques and the postseason success, however. The head coach had fostered a tight-knit culture of playing for one another, which kept starters and bench players, freshmen and seniors, equally as engaged and motivated.

In his absence, would all the hard work unravel?

The timing of the departure - July - sparked a scramble off of Grant Street. Francesco Cardillo, Howlett's assistant at Buffalo State for two years and a Bengals soccer alum himself, was quickly named the interim head coach; there simply wasn't enough time to conduct a thorough enough search before preseason began.

Thankfully for the Bengals, a strong culture among the players  and returning staff was already in place. Cardillo was familiar with the day-to-day operations, and senior captains Robert Williamson and August Finn brought different - and invaluable - leadership qualities to a tumultuous situation.

"It's been a bit of a whirlwind," admitted Cardillo during the team's non-conference slate. "It's a lot more than I expected. I know I've done a lot in the past, [but] it's a different animal coming into this. It's been fun though - I've enjoyed every minute of it working with these guys."

With SUNYAC play heating up - the Bengals (6-2 overall, 1-1 in conference) welcome Howlett and the Knights to Coyer Field at 4 p.m. Sept. 28, then 4 p.m. Sept. 29 against Brockport - here's a look at five additional things to know about Buffalo State men's soccer.

A 2015 graduate of Buffalo State, Cardillo is the youngest coach in the SUNYAC by a significant margin. The Ontario native's style isn't too dissimilar from Howlett's; the new head coach can certainly bring the intensity and fire, much as he did on the field.

Despite his age, Cardillo is quick to praise Howlett's role as mentor. 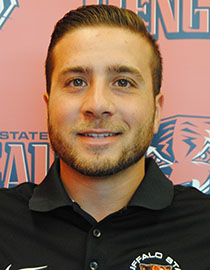 "Mark ... let me do a lot of it," Cardillo said. "He didn't hold back on everything that he did, and he showed me everything that I needed to know. There's really not many new things that I haven't encountered, it's just how much of it - what it takes, the time, the effort to put in to make sure the job is getting done right."

The daily grind has been an obvious challenge, one that can wear down someone experiencing it for the first time. The conference schedule is unforgiving; the Bengals play four pairs of back-to-back games, which is rather baffling from an NCAA standpoint (Division I teams, with theoretically bigger budgets, often have a day off between games to recover. Not so in the lower divisions).

That pace was Cardillo's biggest worry a few weeks into the job.

"Just being in here day in and day out, to be able to be a resource for the guys," Cardillo said of his responsibilities. "It's not just on the field, it's in the classroom, it's everything else associated with being a college student and a student athlete."

One of Howlett's more endearing traits to his players was how committed he was to helping them become well-rounded people. Buffalo State soccer fans saw Williamson, Devonte Black and Sammy Wasson grow exponentially in their maturity as well as soccer players. Cardillo has embraced the same level of care so far, but longevity and consistency will now be the tasks.

Leadership when it matters 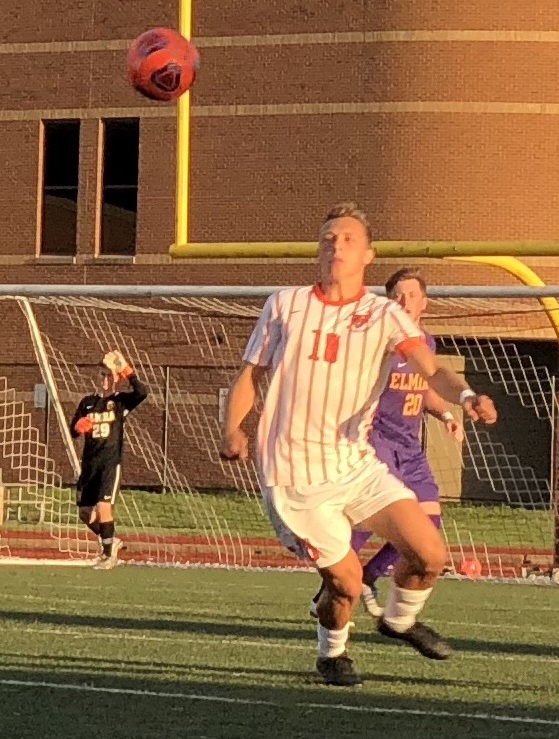 August Finn has been a model student-athlete for Buffalo State. As an underclassman and then as a junior captain last year, the Poughkeepsie-area native was outspoken on the field, urging his teammates on in tough moments and serving as a vocal leader. The Bengals' respect for Luke Pavone and Finn was one of the traits that made Howlett's culture work.

This preparation was vital in the unexpected transition leading into the 2018 season, as the returning captain was quick to understand his responsibility in addressing the move from Howlett to Cardillo.

The shift of an assistant coach, typically closer with the players and often a liaison between them and the head coach, to the main gig can be complicated from a player-relation standpoint.

"For me it was actually a bit of stress, but as soon as I got the news from Coach Howlett that Coach Franco would be taking over, I talked with Franco and immediately I trusted him," Finn explained. "I knew he was ready for it."

When asked how much new responsibility he had to assume, Finn delved deeper into his early-season focus.

"Now I'm the senior captain, so there was always going to be more responsibility for me," he said. "The biggest aspect for me is translating the same respect everyone had for Coach Howlett and make sure it's the same for Coach Franco, and it certainly is."

Since the first 900 words of this article were about impossible-to-quantify intangibles, here are some on-the-field nuts and bolts.

Finn is the workhorse in the middle of the park; he might not always be the smoothest on the ball, but he's a menace in challenges, covers tons of ground and has the versatility to play a number of different roles.

Andy Queen, the senior goalkeeper, has developed into one of the conference's best at his position; of players who've started five games or more, Queen boasts the best goals-against average at .57.

Williamson remains a beast at center back, dominating in aerial battles and showing underrated soft feet. He's a capable finisher, too, potting three goals during the non-conference schedule.

Among the other returnees, Grand Island product Nemanja Simic has seized the role of holding center midfielder without Victor Powell available this year, while Anthony Roncone - a midfielder under Howlett - has stepped into an offensive-minded outside back role for Cardillo.

Although he's suspended for the Geneseo match, Williamson's center back partner Saleman Salim is an athletic wunderkind who continues to improve.

Perhaps most importantly, Cardillo has preserved the style that propelled Howlett's teams to success: high pressure on the ball all over the field, a quick and at times frenetic pace of play, and an emphasis on forcing opposing defenses into turnovers in bad spots. 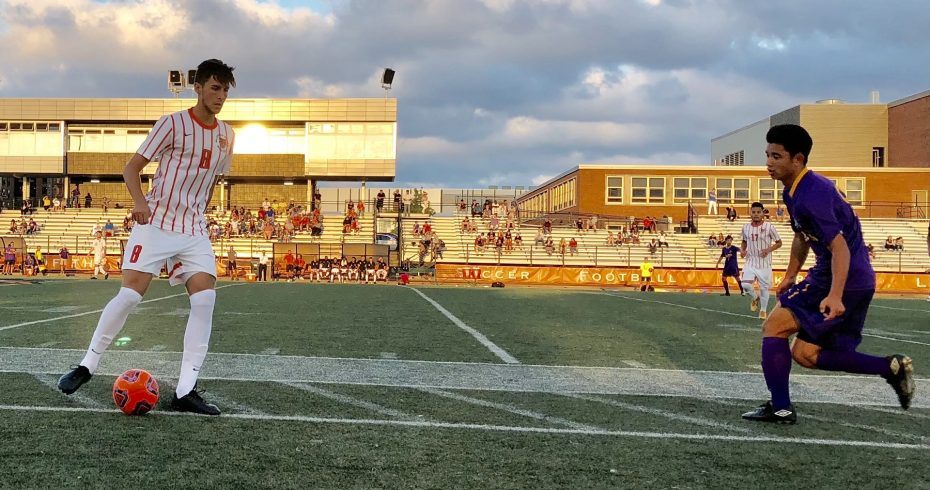 Reloading offensively was key for the Bengals this off-season with Pavone and Wasson graduating, and even with the coaching transition, Buffalo State made some savvy moves.

Although he's been used as instant offense off the bench at times this year, Shaibi - a McKinley High School alum - described his process of adjusting to the college game.

"I definitely got better from practicing with Buffalo State," Shaibi admitted. "It was hard at first, but I got used to it. They were good, but they're really good teammates and help me a lot. They helped me understand how the team goes."

Factor in the additions of defender-midfielder Colin O'Keefe from Erie Community College; Trevor Moreland, a Newfane High School great; and three immediate contributors - Badi Smith, Ramazani Juma and Abou Traore - from other regions of New York, and Cardillo is decently equipped with talent to groom over the coming years, if he indeed is chosen to lead the program on a permanent basis. 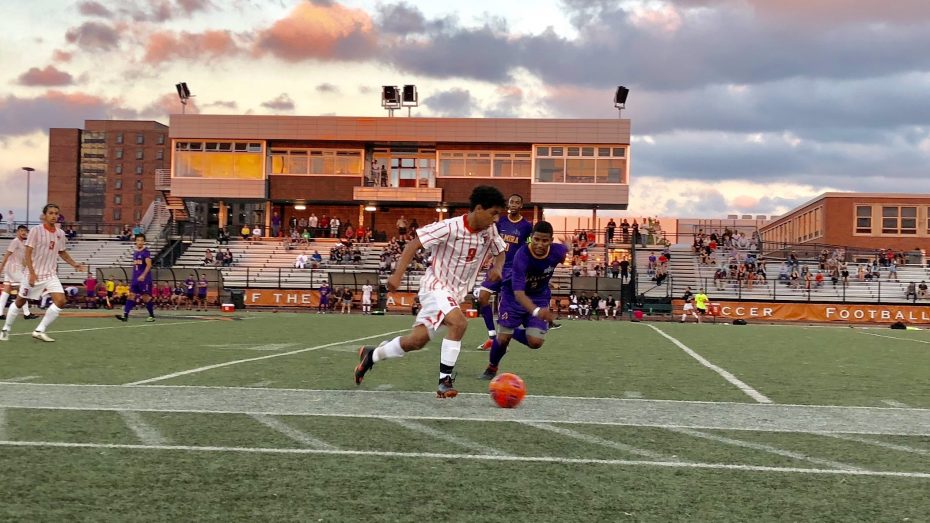 The SUNYAC is truly a gauntlet, and given the perennial strength of programs such as Oneonta, Cortland, Plattsburgh and even Brockport, even making the six-team playoffs is not a given. The Geneseo-Brockport back-to-back is an example of how unforgiving the conference schedule is, and how managing minutes to reduce the chances of injury may make or break a season.

Buffalo State didn't carry a thin 19 players on its roster by design; eligibility issues prevented a Ghanaian recruit from joining the side, Powell has missed the campaign for undisclosed reasons and a transfer from Stony Brook simply didn't pan out.

So, when two or three Bengals go down to injury - something inevitable and already happening - or a player is suspended for a match or two, then suddenly depth becomes a pressing concern.

The Bengals are far from the first team to suffer from a lack of clinical finishing and chance creation, but in the three-game stretch of University of Rochester, Oneonta and New Paltz, Buffalo State scored only once and was out-shot a rather glaring 12-5 in the third contest.