Kenny Harris was on the other end of the telephone, so there's no telling the facial expression former St. Joe's football great made when informed of the length of Canisius' current winning streak in the series between the longtime rivals.

His verbal reaction, however, indicated he likely had a look of disbelief on his face when he heard the number has reached nine. (If life were a cartoon, his eyes probably would have popped out of his head for a few seconds.)

Harris never lost to the Crusaders during his scholastic career. In fact, the former Pittsburgh Panthers and NFL cornerback was part of what both sides of this series call "THE STREAK." That's the period of time when the Marauders reeled off 17 straight wins from 1983-98 (with the teams meeting twice in 1996).

"I'm upset with that streak because we never thought we'd lose that many in a row to Canisius," said Harris, who is now a business entrepreneur and player agent.

Harris isn't the only one with Marauders ties upset with the current streak — the second-longest by either team in the series. On the other hand, Canisius graduate and retired Baltimore Ravens guard John Urschel is thrilled with it for obvious reasons.

How much does the series matter?

Urschel said the reason Canisius lost his sophomore year at St. Joe's was because the Marauders watered the field to the point where it negated his team's speed advantage. (For the record, the Marauders won both meetings that year, although a 42-point win was followed up by a six-point decision the following week in the playoffs.)

New ones will be formed at 7 p.m. Friday when Canisius meets St. Joe's in a Monsignor Martin High School Athletic Association clash at New Era Field. 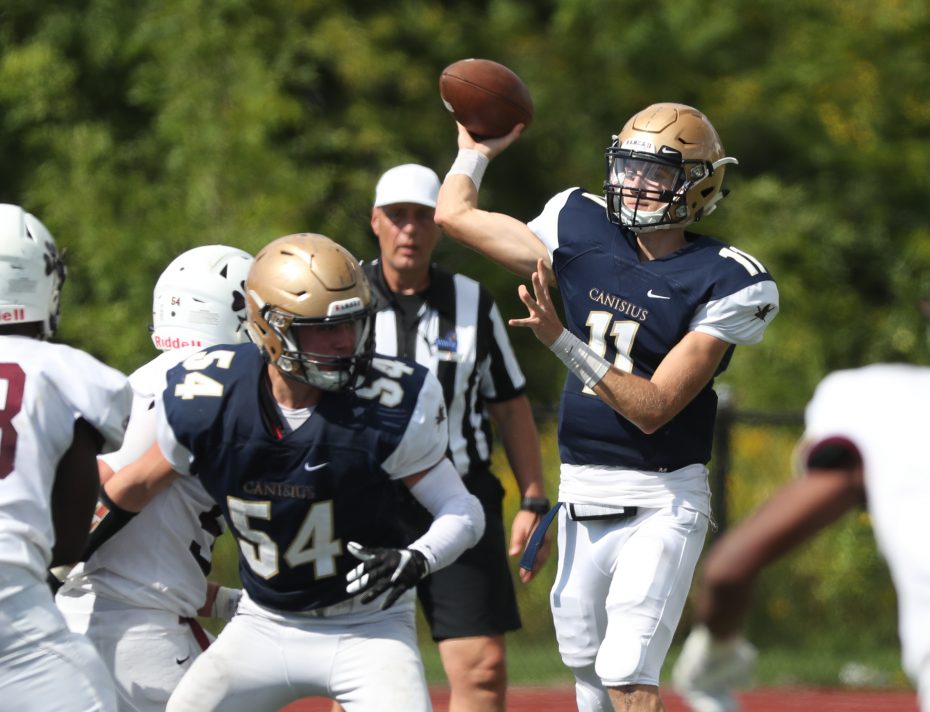 Both meetings between the teams last year took place at the home of the Buffalo Bills with the Crusaders edging St. Joe's in the Monsignor Martin High School Athletic Association championship game, 22-14, last November.

With the Marauders featuring two Division 1 commits on their starting line in Tyler Doty and Cole Gambino, many think this could be the year they get back into the win column in the rivalry — especially with Canisius being young in several spots.

A three-year starter prior to graduating in 1997, Harris never thought St. Joe's would lose to the Crusaders.

Harris may have not known the current streak, but it's a good bet others at the school, or those who still closely follow their alma mater, know it's been a while since the Kenmore Avenue school experienced victory.

The last time was when current Denver Broncos backup quarterback Chad Kelly guided the Marauders to a 48-47 last-second win in the Monsignor Martin semifinals on Nov. 10, 2011.

The once double-digit all-time series lead for St. Joe's is now into single digits at 47-39-3. It doesn't take a math whiz to realize that the rivalry has been slanted in Canisius' favor lately, but the Crusaders do have one who still keeps track of his alma mater in Urschel.

He won't be in attendance Friday because he's attending a Math conference in Germany as part of his fellowship. He will keep tabs on it though, as the game is being streamed online at OneBuffalo.com.

While the game is the main event, it's not the only reason the St. Joe's-Canisius rivalry is a big deal to students and alumni.

It's spirit week for the schools with activities promoting school pride taking place — planned around the football game. While back in the day their used to be motorcades (Harris said St. Joe's used to have a dummy dressed in a Canisius helmet that would be dragged as part of the Joe's one) from both sides, now it's pep rallies, a game-day sendoff and, of course, tailgating by those young and old.

It's also alums stopping by their alma mater to buy tickets and find out how things are going.

"There's an atmosphere. It means something to most students. It's really fond memories (for me)," said Urschel, who played in five Canisius-St. Joe's games — helping the Crusaders win three times.

Brian Anken is in his second year as athletic director at St. Joe's but grew up in the West Seneca West-W. Seneca East rivalry. They are bitter competitors, but he's noticed a difference when it comes to maroon and white versus the blue and gold.

"The thing for me is the history and tradition of it," Anken said. "It's just different with this level of involvement. You walk around the halls of the school … signs everywhere. … You can't help but embrace the tradition."

"It's almost like a college homecoming, everybody is going crazy," Harris said. "It gives you that college atmosphere in high school."

While Harris played college football in a major conference and had a short stint in the NFL, if he had a chance to turn back time and suit up for one more game — the 39-year-old's game of choice is a no-brainer.

And it's not just because he wants the current streak to end.

-- West Seneca East at South Park, 7 p.m. at All High Stadium. Former Class A South rivals are still in the same division. That makes the Class A-3 game between the two unbeatens a HUGE game, as usual, with the winner being in the driver's seat for capturing the division title. No. 4 large school WSE crushed Starpoint last week, while third-ranked South Park rolled Amherst, 40-8.

-- Southwestern at Olean, 7 p.m. Class C versus Class B nonleaguer. Unbeaten Trojans come into the game ranked No. 3 among small schools behind star quarterback Cole Snyder. Class B Olean is ranked 10th and coming off a win over Medina.

-- Kenmore West at Niagara Wheatfield, 7 p.m. Class A-1 clash between a pair of teams with one division loss. Depending on tiebreakers, the loser could face uphill climb earning a Nos. 7 or 8 seed for the playoffs.

Among the dignitaries in attendance was 94-year-old Vic Cleri, who played for Lockport High and later coached the Lions from 1949-62. Members of various Lions graduating classes — most of them former players for Cleri — attended the 30-minute gathering.

Lockport will officially get to christen the former grass field with a game Oct. 6 when it hosts Williamsville North.