YOUNGSTOWN – As the public address announcer at Blakeslee Field asked the crowd for a moment of silence Friday night to honor Janice Previte, the audio system in the stadium went silent.

There was no sound, no crackle, not even an ambient buzz.

For Frank Previte IV, a sophomore running back on the Lewiston-Porter football team, the silence was a sign that his mother was still with him, three days after she died on Sept. 19, following a six-month fight against leukemia.

The public address system resumed operation right after Previte scored his first touchdown in a 34-12 win against Lake Shore.

“My family said to me after the game that they could feel my mom’s presence,” said Previte, who scored three touchdowns and ran for 189 yards in Lewiston-Porter’s first win of the season. “She never liked being the center of attention. She wouldn’t want something like that. It was like a sign.”

Only a few days after his mother died, he honored her by simply playing. Football became a haven for Previte during his mother’s illness. His teammates have become his second family. Their support has sustained him through a difficult time. And he has shown them how to persevere.

“I wanted to play that game, and it was an easy decision for me to do that,” said Previte, whose team plays Friday at Pioneer. “She always loved watching me, and she loved watching her kids play any sport.”

Janice Previte was a mother of two children and the wife of Frank III, the chief of police in Lewiston. A graduate of SUNY Buffalo State, she was a senior associate production planner at Life Technologies/ThermoFisher Scientific in Grand Island. She was the sister of former NFL fullback Daryl Johnston, a Lew-Port grad who played in the league for 11 seasons with the Dallas Cowboys.

Janice, 55, loved sports and played soccer at Lewiston-Porter. She encouraged her children to play sports, and every season was a shuffle for Janice and Frank III, and their children Frank IV and Alicia.

“We always grew up playing sports as little kids, and as we got older, we kept joining teams,” Frank Previte IV said. “We were always playing something. I played little league soccer, youth football, and then it moved on to travel team soccer and then to playing football for school.”

Previte found out in February about his mother’s diagnosis. He doesn’t know exactly what type of leukemia his mother had, and he can’t remember the exact date of when she told her family that she had leukemia.

But he remembers the numbness that came with the message. 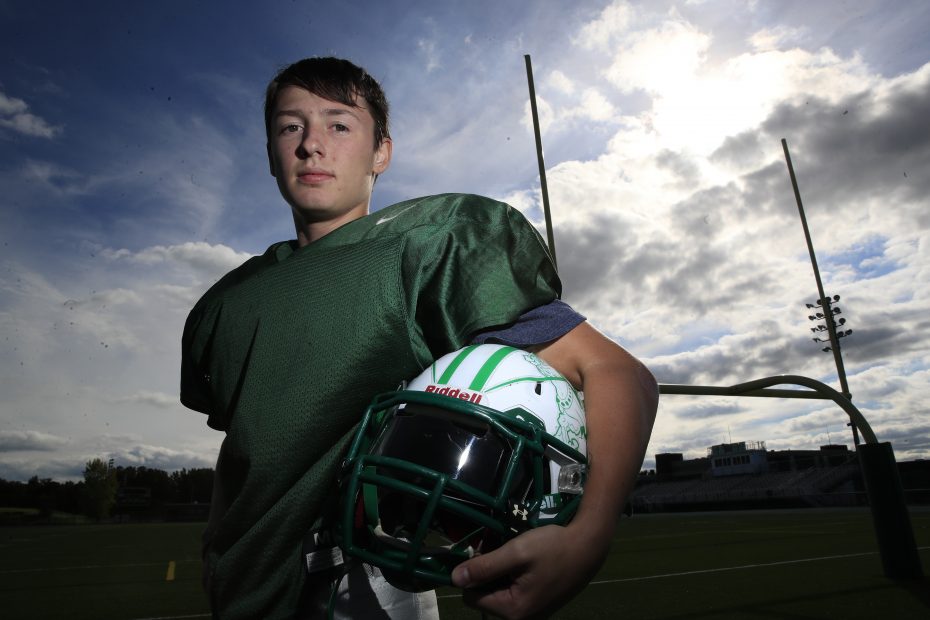 “It didn’t feel real at all,” Previte said Wednesday. “It still doesn’t feel real. She told me, and I was sitting there and I was kind of thinking, I was in a dream, that it was a dream and I felt like I was going to wake up and everything would be normal again.

Being with the football team in the summer and fall, and running track in the spring, was a way for Previte to take his mind off his mother's illness.

Yet, he said, his mother always had a message for him and his 18-year-old sister, through the final six months of her life.

“Be positive,” Previte said. “Every time I saw her, she had a smile on her face. She never would really say that she was fighting with leukemia. She would just say she was diagnosed, that she had it. And it was good to see how she fought, and how she had the strength to keep going, and to stay positive through all of that. She never complained about a single thing.”

Wednesday nights during football season are wing nights for the Lancers. Members of the football team meet at a local restaurant for a dinner of chicken wings, a weekly tradition organized by Joe Powers, a senior captain and a two-way lineman.

Powers noticed when Previte backed out of wing night, and he didn’t initially ask questions. Previte, Powers said, was rather reserved and didn’t share much about his personal life, even though Powers knew his teammate’s mother was ill.

Finally, Previte admitted to Powers that there were times he would have to forgo the weekly dinner so that he could visit his mother at the hospital.

Do what you have to do, Powers told his teammate.

“People knew Frankie was having a rough time, and we wanted practice to be a safe space for him, a relief,” Powers said.

“I was always brought up and told that football is family. Supporting Frankie as he went through this, it was more of something that we felt had to be done for one of our family members.”

Janice Previte died at 2:30 in the morning Sept. 19 at Roswell Park Comprehensive Cancer Center in Buffalo. Frank Previte IV went to school a few hours later, and Lew-Port coach Matt Bradshaw pulled him aside in the hallway.

“I told him, ‘You don’t have to come to practice, because your spot will be here Friday,’ ” Bradshaw said. “He said he wanted to be here with the guys.”

Previte joined the football team that afternoon for practice. Then, he went to wing night.

“We all knew it was rough for him,” Powers said. “But there were nights he would come anyways. And it told me that there were days he was dealing with so much, emotionally, but he would still rally, and still be able to enjoy the family aspect of our team.”

A show of compassion

As soon as Powers got word that Janice Previte had died, he called the team captains, and started a chain of text messages among the football team. Then, he learned of arrangements for a memorial service Sept. 23 at First Presbyterian Church in Youngstown, and sent more messages to his teammates with specific instructions.

Each of the Lancers boarded a school bus, and sat silent on the 5-mile trip from the high school to the church.

“That was so nice to see, that they cared that much about me and about my family, and that they were there for me in such a tough time,” Previte said.

To Bradshaw, it was a show of compassion and solidarity from his team. About 12 hours after they celebrated their first win, the Lancers celebrated the life of an individual.

And a family member.

“It tells me how these kids were raised,” Bradshaw said. “For every kid to show up, when I didn’t say they had to, and I’d only made a suggestion to our captain to organize this …

“For every kid to show up, that’s a testament to the character of these kids. But let’s not forget they’re raised that way. Their parents deserve a lot of credit for that, too.”

A few days after Previte played his best game with the Lancers, Powers was still astounded by how Previte has handled the grief of losing a parent.

“To see him, after a tragedy like that happened and took someone so close to him, to come out and work for his secondary family was just amazing,” Powers said. “It showed me his loyalty and his love for us.

“We have to return that, what he has done for us. He’s never said anything specific about wanting to dedicate his season to his mother, but I can tell this season is going to be very special for him.”

Previte plans to honor his mother and his team the best way he knows how.