A recap of a dramatic, emotional audition, by Blaise Miranda-Mercedes, as told to Jeff Miers:

I hadn’t told a single person I was auditioning that day. I wanted to do it for the right reason. My family knew something was up, though – I was jittery and especially upbeat. I told them I was running errands. They knew, anyway.

I arrived at Canalside a little after 4 p.m. The line was significantly shorter than it was in my friend’s Facebook photos. “Around 1,200 to 1,500 people” staff at Canalside said. “Some waited since 5:30 in the morning!”

I picked up a release form, got in line and waited with the last of the group. We were the last four. Security made it a point to tell us, “Turn around.” There was no one behind us.

I got nauseous. Remembering how nerves feel, I found a new desire to slam my audition. I wanted this more than I realized.

I was the first in my group to sing. I opened my mouth, nerves and the butterflies left my body all at one and a confidence I’m grateful for overcame me.

I did my best, we cheered for others in the room, and then we waited.

The others in my group were thanked and dismissed by our judge. She explained the next steps, congratulated me, and wished me luck.

In hindsight, I was super calm. I felt like I should be jumping up and down and being really happy, like a lot of the contestants are on TV, but I didn’t feel a need to. I felt content just being there. I felt like I went for the right reasons, I felt like I did my best and the reality of the circumstances kept me in the moment. 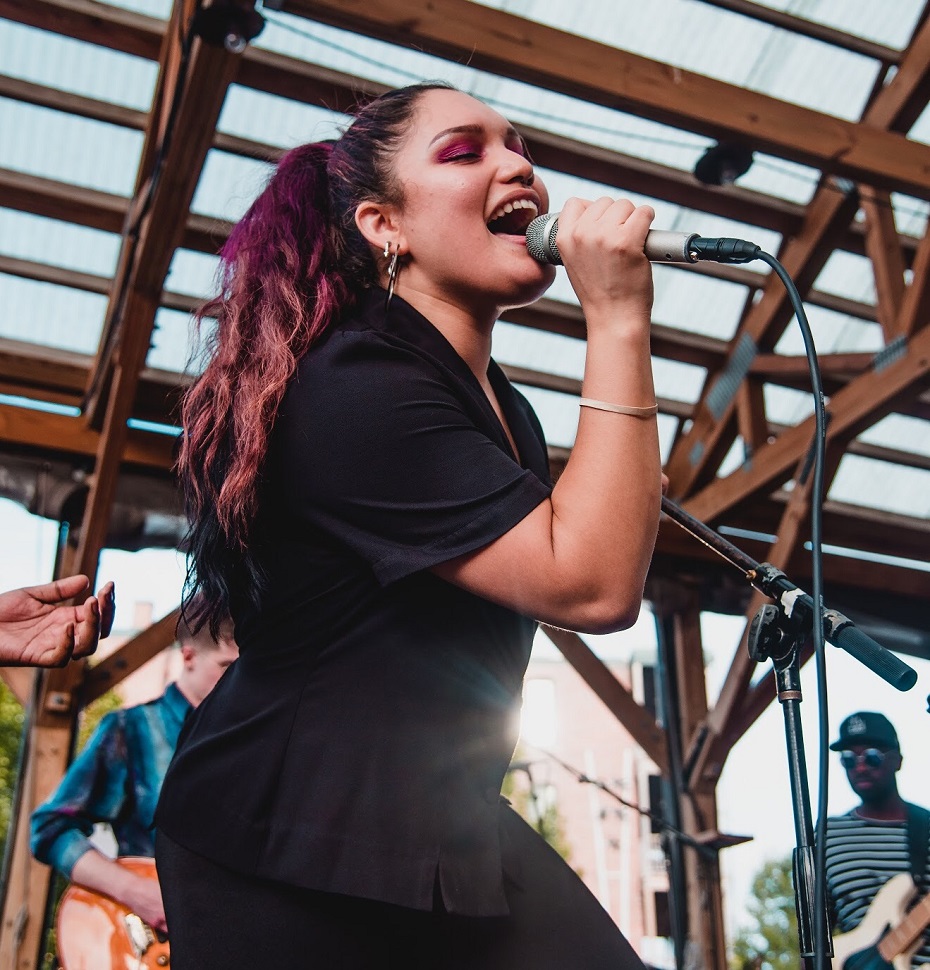 Blaise Miranda-Mercedes performing as part of the 2018 Live at Larkin series. (Photo by Sam DeMartin)

I am very grateful for the staff and the security working that day, because they were all very supportive and were asking me questions as though they were interested and wanted people to succeed. It was a great vibe all around.

The more we spoke, though, the more I realized how few people got through to the second portion. I kept asking questions and soon someone told me that maybe 20 people were approved for the next portion. Out of 1,300-ish people? That is humbling... and it put a lot into perspective. It made me feel like I am doing something right, like the work I have been putting in over the past years is evident.

I also made a new friend that day. Her name is Lily and she’s from Connecticut. She drove a long way with her dad and while she didn’t make it past that audition, she had an amazing attitude and was happy she had the opportunity to try. I appreciated my chance more, too.

The fact that I decided to shoot my shot means more to me than making it to the final rounds, I think.

There were a lot of young people there, too. We have ambition and passion and the willingness to shoot for something. Seeing the variety of people, many of them my peers, was inspiring, to say the least.