As the federal government increases scrutiny on Buffalo Municipal Housing Authority spending, City Hall is considering sending its building inspectors to BMHA apartments for the first time to check for violations.

Buffalo Council members Tuesday suggested building inspectors check on several apartments with problems brought to the Council's attention in recent weeks. Tenants are continuing to complain about bedbugs, mold and repairs not getting done.

"I don't want to treat the BMHA different than any other landlord," said Council President Darius G. Pridgen, who said he once lived in the public housing agency's Commodore Perry apartments.

The U.S. Department of Housing and Urban Development, meanwhile, confirmed Wednesday it is conducting a procurement review looking at BMHA purchasing documents to determine if procedures are being properly followed. The review comes after The Buffalo News published articles detailing questionable BMHA purchasing practices.

"If need be, the BMHA will be asked to make changes," said HUD spokeswoman Olga R. Alvarez.

The BMHA's financial and operational troubles were on display in Council Chambers this week, as lawmakers again attempted to lead a discussion on City Comptroller Mark J.F. Schroeder's call for an outside firm to audit the housing authority.

Schroeder called for the audit after The Buffalo News reported in July that the BMHA gave almost $400,000 in mostly no-bid work to a recently created firm with ties to a BMHA supervisor. The News also reported it appeared the authority violated federal rules prohibiting government agencies from splitting work into small contracts to avoid public bidding thresholds. In a followup article published in August, The News found that the BMHA paid more than other local governments for items such as rock salt and garbage bins and even more than typical consumers when it purchased batteries.

BHMA officials did not attend Tuesday's Council finance committee session, and there was no decision on Schroeder's proposed audit, which housing authority leadership opposes.

But early in Tuesday's meeting, tenant advocate Joseph Mascia told lawmakers that petitions are being circulated in all BMHA developments asking Council members to support Schroeder's call for an outside firm to audit the BMHA.

"By the end of this week, we look to have 1,000 signatures," said Mascia, who has remained a tenant advocate since being forced off the BMHA board of commissioners for making racist comments in 2015. 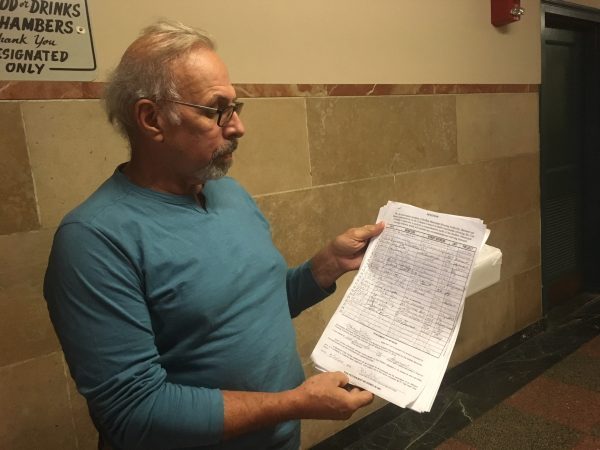 Nate Boyd, also a tenant advocate, spoke in support of the petition, then told lawmakers about a woman in the Kenfield Homes who says her respiratory problems are being exacerbated by mold in the basement of her apartment.

The session ended with Pridgen calling on the Council to create an ad hoc committee to hear BMHA concerns, and also suggesting city building inspectors be directed to check conditions at three housing authority apartments.

Pridgen noted the case Boyd cited represents the third the Council has heard this month involving residents concerned about mold in their BMHA apartments.

After being told of Pridgen's comments, Mayor Byron W. Brown – no relation to BMHA interim director Gillian Brown – said he's going to invite Council leadership, Gillian Brown and James Comerford, commissioner of the city Department of Permit and Inspection Services, to a meeting "to discuss the best way to respond to tenant concerns and issues at the BMHA."

City inspectors currently conduct inspections necessary to approve construction and related permits for the BMHA, but have not conducted the code violation inspections in apartments like Pridgen suggested.

It's not clear what authority the Council would have to force the federally funded BMHA to make repairs identified by city building inspectors, according to Pridgen and Council staff.

But Gillian Brown, who is expected to be named the permanent BMHA executive director next month, said that if city inspectors find violations, the BMHA will correct them. "We address complaints as they come in," he said.

The Council earlier this month passed a resolution asking officials from the BMHA and city Comptroller's Office to attend Tuesday's Council finance committee meeting to update lawmakers on any discussions they held on Schroeder's request that an outside firm be hired to audit the BMHA.

Gillian Brown told The Buffalo News that he didn't receive a copy of the resolution so wasn't aware BMHA officials were expected to attend the meeting.

Brown also confirmed that he cancelled a previously scheduled meeting with the comptroller to discuss the suggested audit, and has not yet had time to reschedule.

"I will reach out to them," Brown said.

"We sent him a ton of documents," Brown said of the HUD procurement expert working on the BMHA review.

Brown repeated that he doesn't believe the outside audit Schroeder is suggesting is necessary or that it would be money well spent.

"HUD offers a procurement review of all our policies for free," he said.