When I worked in Niagara Falls, for about five years in the early, early 21st Century, I got used to the local citizenry shrugging at things that made people from elsewhere gawp. Everybody else might call that waterfall a wonder of the world, as it draws planeloads of people from Seoul and Mumbai, but inside the city limits it was not unusual to meet folks who hadn’t set foot inside Niagara Falls State Park since childhood.

So to find that the city’s most beloved pizza emerged from a restaurant with a Mexican name, whose logo, emblazoned on its façade, is a cartoonish sombrero-wearing vaquero, did not particularly register at the time.

Maybe it was the distraction of another natural wonder: Aldo Evangelista, the Italian-born owner, who dispensed pizzas and plates of Italian-American specialties with the jovial-on-top-serious-underneath air of a cardinal offering blessings after Mass.

When he died last year, generations of La Hacienda customers wondered if the pizza would stop flowing.

Then it was purchased by George Satarian, a member of another notable immigrant community that made Niagara Falls a site of New World success. So the Italian-American mecca with the Mexican moniker has an Armenian keeping an eye on things, which might even make La Hacienda more Niagara Falls than ever. 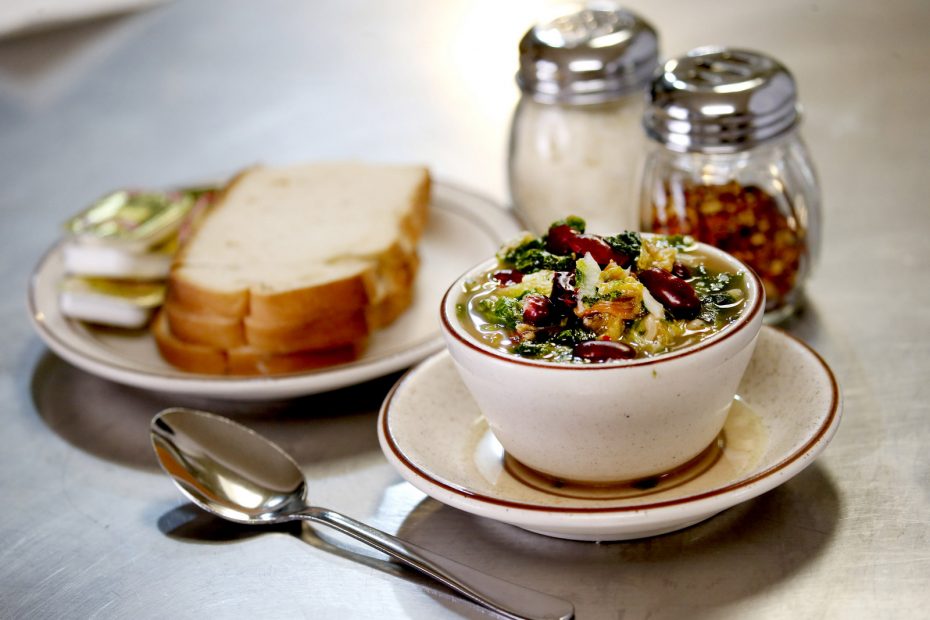 Greens and beans at La Hacienda is one of the Italian favorites still served on Pine Avenue. (Robert Kirkham/Buffalo News)

Satarian made it his mission to not change a thing – except the lemons. Evangelista ran his cash-only operation with such financial rigor that it cost 35 cents if you wanted lemon in your glass of ice water. La Hacienda still does a cash business, and the ATM in the corner of the dining room exacts a $3 fee, but the lemon slices are free.

The intricate jumble of clown dolls, beer steins and other ceramic tchotchkes behind the bar hasn’t budged. Most importantly, the staff has mostly remained the same, providing a culinary experience whose consistency surprised a Niagara Falls-born guest who has eaten meals at or from La Hacienda “hundreds” of times.

Open the menu and Evangelista still greets you from its pages. They’re wrinkled with use – some of the pages say “Printed January 2016” – but that’s not really a complaint, since it means prices haven’t gone up in years. A gin and tonic was $3.75, so you might as well order them in pairs.

An order of pickled cherry peppers stuffed with anchovies and dressed in La Hacienda’s simple, robust Italian oil-and-vinegar dressing is still $4.95. Crunch into the chiles for a sub-jalapeno twinge of heat and a blast of tangy aquatic brine, then mop the plate with a slice of crusty Italian bread to get all the flavor. 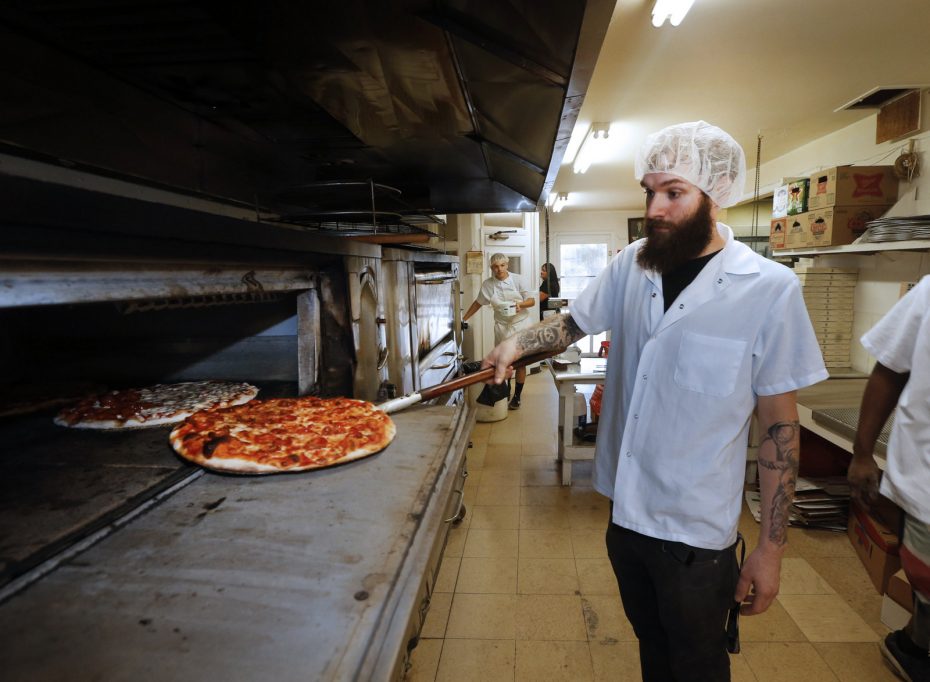 Pair them with a bowl of beans and greens ($9.40) for a hearty meatless meal. Loaded with coarsely chopped vegetation, fat kidney beans and onion, its peasant pleasure didn't need help, but it can be customized with grated cheese, salt and pepper from the battered shakers.

There’s no need to tweak the tripe ($9.75/$19.50). Trippa al Abbruzzese, “laboriously prepared, marinated with wine, red hot pepper flakes and spices” before being simmered until tender, perfumes its tomato sauce with husky liverish flavor. If you've been offal-avoidant but are willing to give it a shot, take this one.

Full up on chicken wings, I headed for the pasta pages.

An order of lasagna and braciola ($20.35) arrived steaming, its bulk already foreshadowing tomorrow’s lunch. Tender pasta sheets hid lush layers of buttery ricotta, accented with mozzarella. Tightly wrapped braciola the size of Ho-Hos were chewier than I prefer, so I ended up using the toothpick I found hidden in them. The house tomato sauce is a backdrop, not a character player, with a minimalist approach to seasoning. 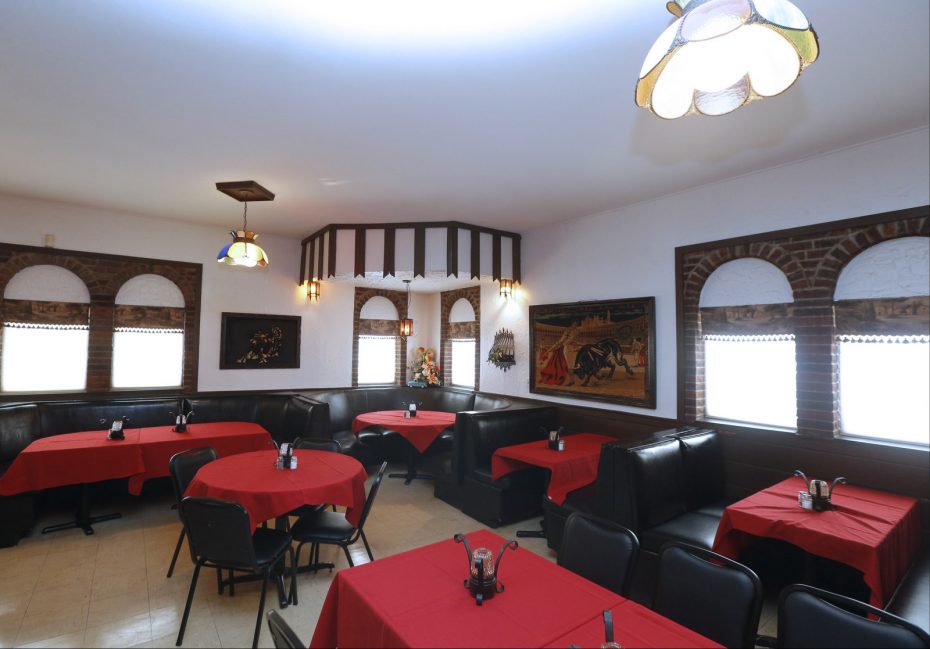 Veal Milanese with spaghetti ($22.50) turned up two slices of pounded-out veal rolled in seasoned breadcrumbs, and a helping of spaghetti with tomato sauce. The results were more tender than crispy, tasting more of crumbs than meat.

Gnocchi with mushrooms, a sausage and a meatball ($23.50) offered a firm, springy pasta bites, that were more thick noodles than fluffy pillows, tender sausage and a distinctly beefy meatball that made me wish a meatball sub was offered.

In a dish of pork and peppers ($13.95), sliced sausage was plentiful. Sauteing green bell peppers brought out some sweetness but more bitterness, putting me off a bit.

The pizza? It’s closer to New York than Buffalo style, its crust noticeably crispy, with a chewy finish, dusted with cornmeal, that gets toasty in spots, with slices that need a second hand to guard against droop. Choosing pepperoni and green olives ($20.60) provided a rousing mix of pepper and pungency. A white pizza assembled with mozzarella, bacon, onion and green peas ($23.40) was a pleasant mélange of salt, smoke and sweetness. 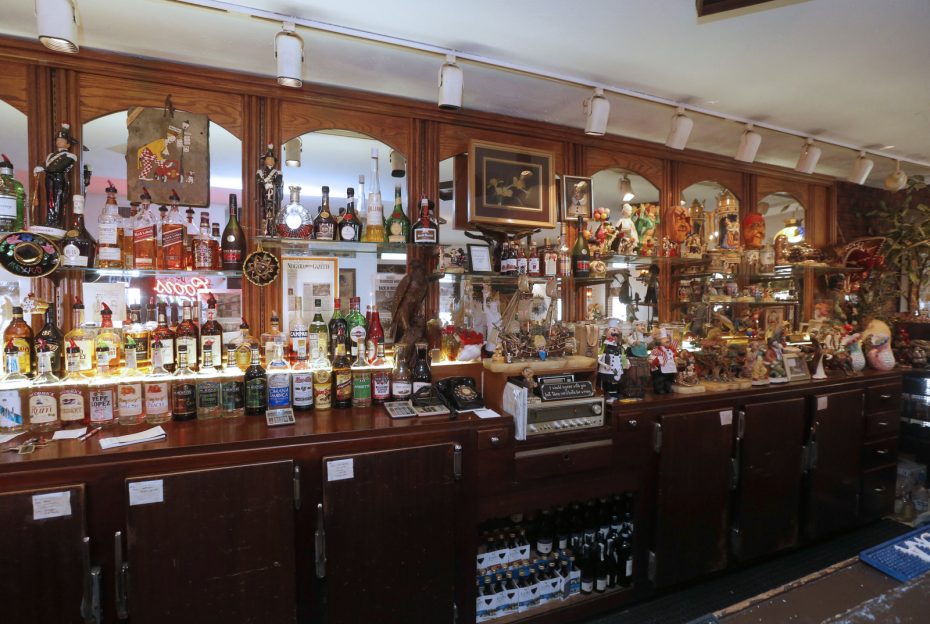 The collection behind the bar at "La Hacienda hasn't changed a bit. (Robert Kirkham/Buffalo News)

If I had been weaned on La Hacienda, I’d be thrilled that my childhood family restaurant is still serving. As an Italian-American family restaurant, it offers excellent dishes amid ordinary ones, flavored with history and presented at more-than-reasonable prices.

When a restaurant centered around a dominant personality changes hands, it usually fades and withers away. So far, La Hacienda is that rare find in a casino town: a player that’s beaten the odds. 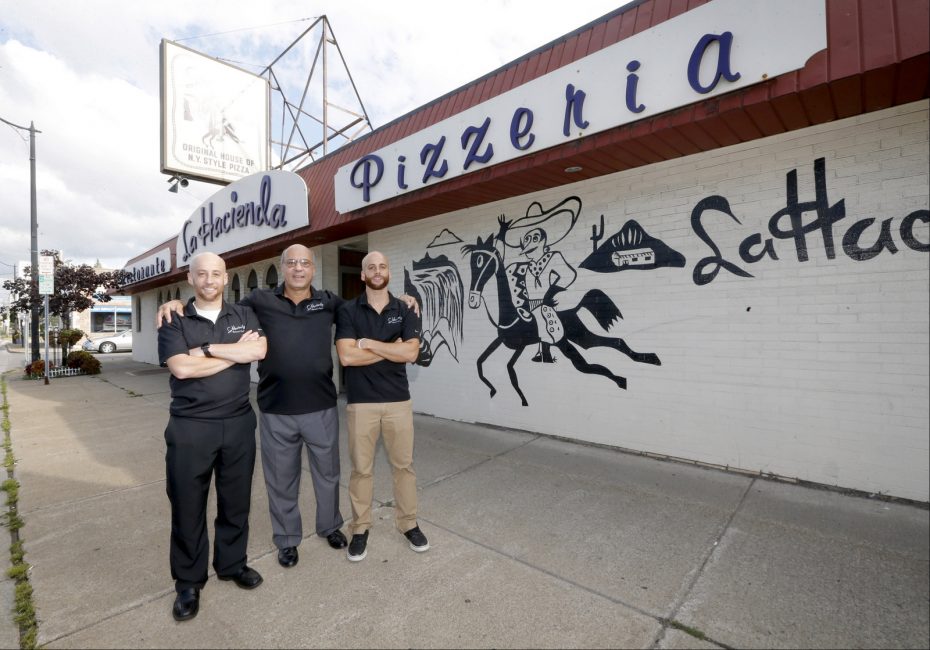