Local college soccer programs have all moved into conference play, where the games have significantly more meaning. As of late September, there's no Western New York team with a realistic chance at an at-large bid to a national tournament.

Buffalo State men's soccer may be the closest, but falling to the University of Rochester and Oneonta in the span of a week seriously dented those hopes.

Here are the five home college soccer matches to watch this week:

What to know about Buffalo State: The dominant storyline for Friday's game is the return of head coach Mark Howlett to Buffalo State, where he turned the program around and led the Bengals to the NCAA Tournament last season before leaving to SUNY Geneseo for family reasons.

Howlett's second-in-command last season, Francesco Cardillo, has sustained Buffalo State's success on an interim basis. The Bengals (6-2, 1-1 SUNYAC) won their first five games before getting shut out twice, then recovered to beat conference foe New Paltz despite being out-shot 12-5 and playing with 10 men for the final 12 minutes.

Carrying a light roster to begin with, Cardillo may be stuck with a tight rotation Friday, as Pencic and Pa Lu have both missed time, while center back Saleman Salim will be forced out of the Geneseo clash after his red card against New Paltz.

The Bengals face a quick turnaround on Saturday, hosting Brockport - another serious contender in the SUNYAC - at 4 p.m. 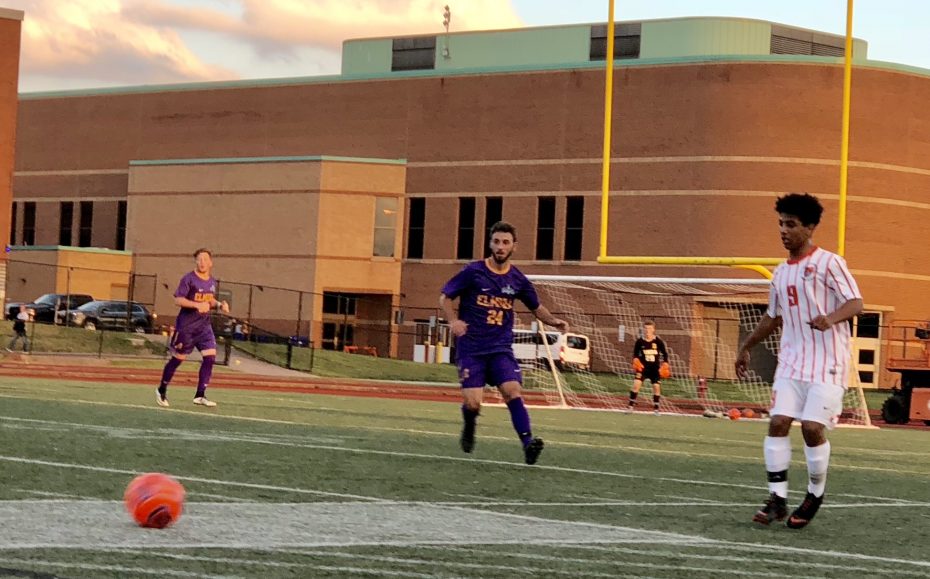 Zakaria Shaibi has contributed for Buffalo State as a freshman. (Ben Tsujimoto/Buffalo News)

What to know about Geneseo: With Howlett officially accepting the Geneseo position in late July, there was barely any time to recruit. Fortunately for the Knights' new gaffer, a veteran-laden roster remained largely in tact despite the changing of the guard. Of the 13 players with four or more starts, 11 of them are upperclassmen.

Although goals have been hard to come by since East Aurora alum Joey Vucic graduated, Geneseo navigated a challenging non-conference schedule by drawing Penn State-Behrend and knocking off Hobart, a measure of revenge on the foe that knocked Howlett out of the NCAA Tourney last year.

Junior forward Bryan Wager - scoreless on 22 shots this year - seems due for a goal, while fellow captains Greg Baumstein and Gavin Gleasman are accustomed to the rugged SUNYAC.

What to know about UB: It's hard to read a lot into UB's 4-2 loss on the road to Mid-American Conference upstart Western Michigan. The Bulls went down 4-0 - half of the tallies from the penalty spot - and senior star Carissima Cutrona was held not only without a point, but without a shot.

On the other hand, UB didn't quit, popping in two goals - by Andrea Judasz and Gurjeena Jandu - to make it a respectable scoreline in the end.

What's even more encouraging for UB (7-2 overall, 1-1 MAC) is the schedule involves a return home Friday and Sunday, and starters Kaitlyn Walsh and Kara Daly are both back in the lineup after lengthy injury spells.

It goes without saying, though, that Shawn Burke's team will need a sharper start and a more poised defensive effort to avoid calamity against the other directional Michigans - CMU is in town Friday, with EMU stopping by Sunday. 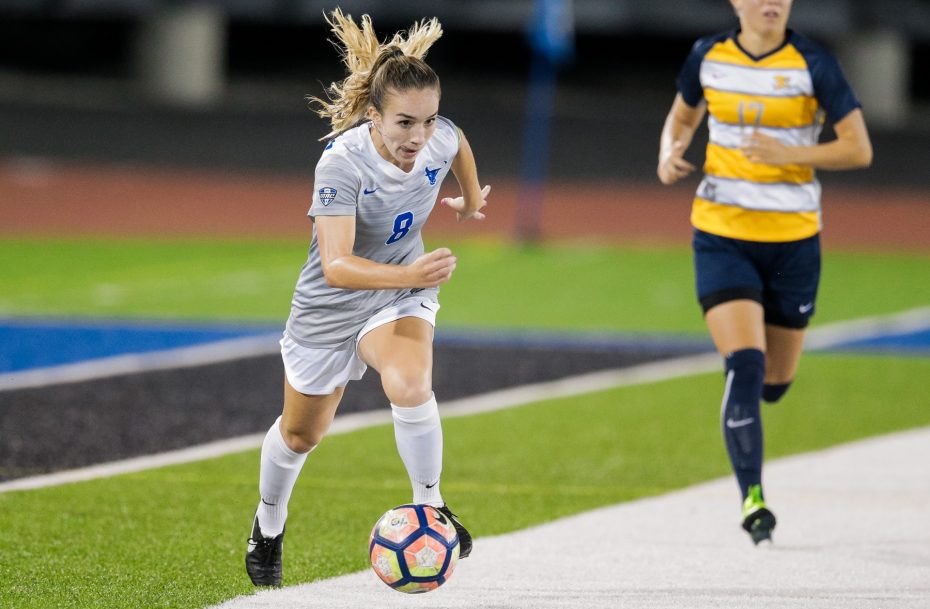 What to know about Central Michigan: Central is off to a flying MAC start, nipping Ohio in double overtime and then upsetting preseason favorite Kent State, both at home. The Chippewas are 1-11 on the road the last two years, however, and cavernous UB Stadium isn't the friendliest of confines for visitors.

Reigning MAC first-teamer Lexi Pelafas has been a thorn in UB's side in the past, knocking the Bulls out of the conference tournament in 2016 with a goal in the third minute that held up. Fellow seniors Mary Carlson (68 career starts), Shannon Magnan (39 starts) and Madison Costner (29 starts) will try raise the Chips' level on the road.

What to know about Niagara: Consider the Purple Eagles the most pleasant surprise among the area's college sides this fall; Niagara is the only team with two wins through two matches in Metro Atlantic Athletic Conference play.

Leading the way is freshman Annie Ibey, from just over the border in Niagara Falls, who's piled up 13 points in eight games, including four game-winning goals - all despite playing less than 60 minutes per match.

Credit head coach Peter Veltri for keeping his core of talent around - Breanne Guevara, Hadley Bucken, Hailey Bicknell and Amelia Gulley have stuck through the program's ups and downs, bringing balance to the back line and the midfield.

Still, Wednesday, vs. Siena at home, and the featured match against Quinnipiac will prove the two biggest tests so far.

What to know about Quinnipiac: Projected second in the Metro Atlantic Athletic Conference, the Bobcats haven't quite met expectations in 2018 so far. Some of that is due to preseason all-conference selection Kelsey Goldring missing three matches, a challenging non-conference schedule, as well as a severe disparity in shots on goal vs. shots allowed (98-144).

Quinnipiac is among the more chippy teams in the MAAC, too; the Purple Eagles and Bobcats are Nos. 1 and 2 in fouls per game, while the latter has already had two players sent off for straight red cards through nine games.

What to know about Medaille: On Tuesday, the Mavericks weathered 19 shots in a scoreless draw against Penn State Behrend, the perennial favorite - along with Medaille - to win the Allegheny Mountain Collegiate Conference. Starting keeper Jonny Pitts, in his first year with the Mavs, stopped six shots in the shutout, proving yet again what an important addition he's been to the squad.

Australian freshman Lachlan Beever has terrorized opponents with his strength, deceptive speed and impressive work rate, striking for seven goals in eight games, compensating for the absence of captain Anthony Marafioti, who's played sparingly due to injury and suspension.

Although his statistics won't leap off the page, right back Levi Bojang has emerged as one of the most improved local players, demonstrating two-way ability, superior quickness and increased comfort with the ball at his feet. His development is one of the reasons why head coach Micky Blythe feels comfortable playing Marafioti at striker, his natural position. 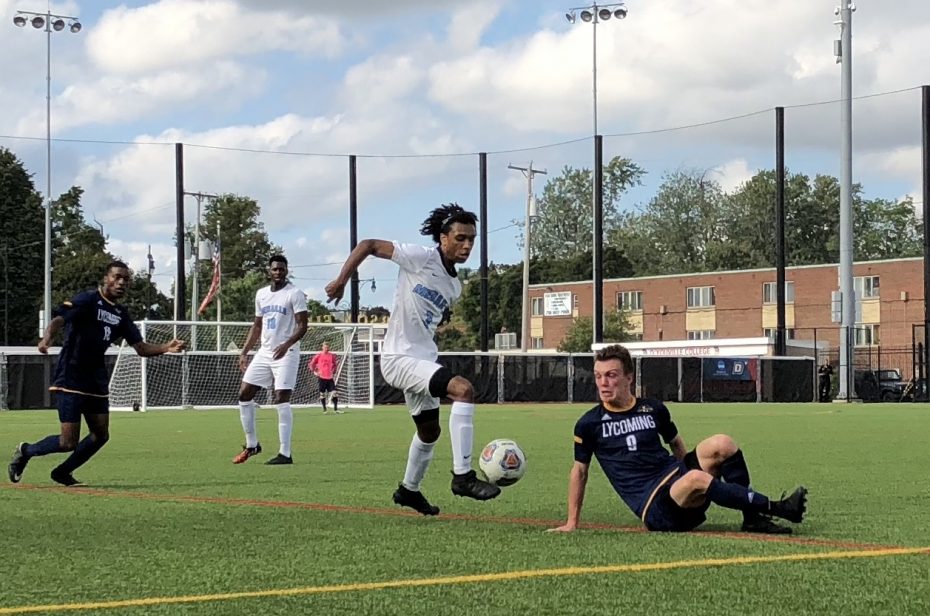 Medaille right back Levi Bojang is one of the most improved local college players. (Ben Tsujimoto/Buffalo News)

What to know about Mount Aloysius: Remember when the AMCC was just Medaille and Penn State Behrend, and no one else had a chance? Mount is trying to buck that narrative by putting a few strong campaigns together, relying heavily - like Medaille - on foreign imports.

Sure, the 7-1-1 Mounties glided through a soft non-conference slate, but it's noteworthy that 13 players on the roster have scored goals, making them tough to prepare for. Head coach Matt Davis, who's also compiled a winning record at the helm of the women's team simultaneously, has done an exceptional job in molding the Mounties into a legitimate threat to win the AMCC.

Surely Mount will remember its dramatic 4-3 overtime defeat of Medaille at home during last year's regular season, but also the heartbreaking 1-0 defeat in the conference semifinals that deflated the Mounties' title hopes.

What to know about Daemen: The Wildcats have a flair for the dramatic in conference, winning their last two East Coast Conference matches, 3-2, in overtime, thanks to game-winning tallies by junior forward Jamie Boyar.

The Williamsville South alum has almost twice as many goals (nine) as the second-place scorer in the ECC, and she's supported by an experienced group that's grown together under the watch of Dan Dolan.

What to know about NYIT: The Bears present a formidable foe, however, as NYIT has proven adept at both ends through two conference matches, blanking Roberts Wesleyan, 2-0, and absolutely annihilating bottom-feed Lincoln, 9-0.

Picked to finish in the middle of the ECC pack, NYIT may overachieve thanks to its stingy defense, backstopped by senior goalkeeper Jessie Sabal, now tied for the school-record in career shutouts.

Senior Jess Hawley and sophomore Casey Luongo share the team lead in points (nine), each chipping in four goals and a helper. Local women's soccer fans might be familiar with NYIT's first-year head coach Karim Diallo, who guides the Long Island Rough Riders of United Women's Soccer during the summer.