Towne Gardens residential complex is “troubled," say federal officials after it flunked an inspection recently with a score of “37c” out of a possible 100 points – with the “c” indicating at least one life-threatening condition.

With the complex in receivership and the possibility of a judicial hearing looming to hear from residents, those problems include:

• A systemic problem with missing or inoperable smoke detectors and blocked fire exits.

• At least a foot of mildew and black mold in some dining areas and under windows, and sewer odors in kitchens.

A passing score is 60, while a 37 generally means “you would expect the building to have serious problems,” said Department of Housing and Urban Development spokeswoman Olga Alvarez.

Some residents call management and the owner “slumlords" and said repair requests get ignored. They also complain about fellow tenants they say have brought the complex down.

Yet others, like 32-year-old Dawn Richardson, praise current maintenance efforts and say they like living in certain parts of the massive complex on Clinton Street near Jefferson Avenue. 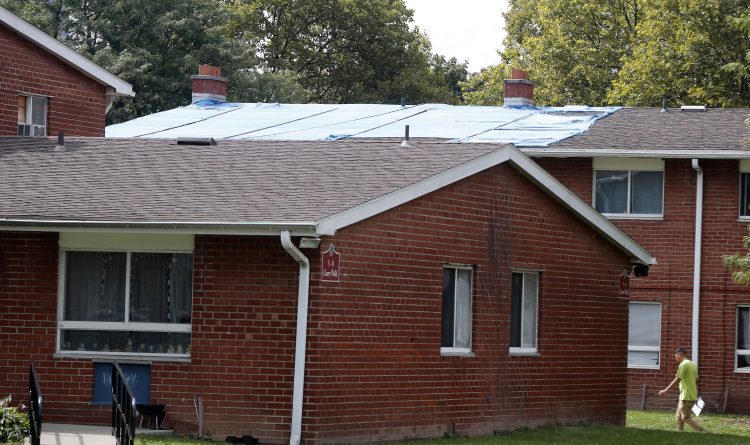 A blue tarp covers a leaky room in one of the buildings at the Towne Gardens apartments. (Mark Mulville/Buffalo News)

Managers say they are making improvements.

“I was warned on the day I was hired this is what I was walking into,” said on-site property manager Bonnie Smith, referring to the scathing June 5 inspection.

Smith works for Platinum Management and said she started on the job in late May. Platinum is spending hundreds of thousands of dollars to correct the problems identified by HUD and make improvements, she said.

But there are more problems beyond the recent HUD inspection at Towne Gardens, which is owned by Towne Gardens LLC and Moshe M. Florans:

• State Supreme Court Justice Henry J. Nowak  appointed a receiver last month for the residential complex to collect rents from tenants, but the owner hopes to end or postpone it. A final ruling is pending.

• And in June, Fannie Mae, the government-sponsored mortgage finance company, filed documents in State Supreme Court to foreclose on the property after the owner defaulted on an $11.5 million loan. That decision also is pending.

Amid praise, blame all around

Towne Gardens is a mix of garden apartments, two-story town homes and three-story, multifamily, walk-up apartment buildings. It contains 59 market rate units and 301 Section 8 units that are subsidized for low-income renters, according to HUD.

To hear residents tell it, it is a tale of two complexes, with tenant satisfaction depending in part on where in the complex they live.

For about a month, Richardson has lived in her Echols Lane apartment in one of the multiple-floor buildings, after spending several years in another part of the complex where there was too much "commotion." She compliments current management and maintenance workers. As she was unloading groceries on a recent morning, she said she had reported a leaky ceiling the day before and, as if on cue, a maintenance man walked up to her building to work on the problem.

Arcelle Hix also likes living in Towne Gardens – but only in her Hickory Street section.

Hix – who lives in a town home –  also says the quality of life in other parts of Towne Gardens is much lower. Buildings are not kept up,  and ruckuses seem to happen more often than she’s comfortable with.

“I like this side. On this side, it’s quiet. I sit out here with my neighbors,” Hix said.

But other long-time tenants  like Sharon Shelton, Ray and Sarah Thompson, and Veronica Patton  say  Towne Gardens is declining because of a “whole new class of people” who have moved in, including some residents with subsidized rents and people who presumably moved to Buffalo after being displaced by natural disasters elsewhere.

They tear up the units. The children “run wild.” Many of the households have more people living in a unit than allowed by the lease. And there’s the loud music and loud neighbors, particularly at night.

“Who starts barbecuing at 9:30 at night?” said Shelton, who has lived in her market-rate McCarley Walk town home for more than 30 years but is contemplating  moving out when she retires.

The Thompsons have lived in their market-rate McCarley Walk town home for 47 years and say the property has “gone down.”

“The number one problem,” said Sarah, 75, “there was no Section 8 when we first moved here. The majority of people were working class. Custodians kept it up well. We had security. Children were well-behaved. They weren’t out after 8 p.m. The entire neighborhood was different.”

Other tenants say the problem is management and maintenance workers.

“They don’t keep up with maintenance," said Angel Agosto who moved into a town house on Curry Walk two years ago from Puerto Rico with his wife and two young children.

“Everywhere you walk you see garbage. Broken sidewalks. Chunks of cement. All the trash is shredded” by landscapers who mow over it  instead of collecting it," he said.  “They’re not making repairs. They’re not cleaning up. People go to the office every day and cry about the same things every day.” 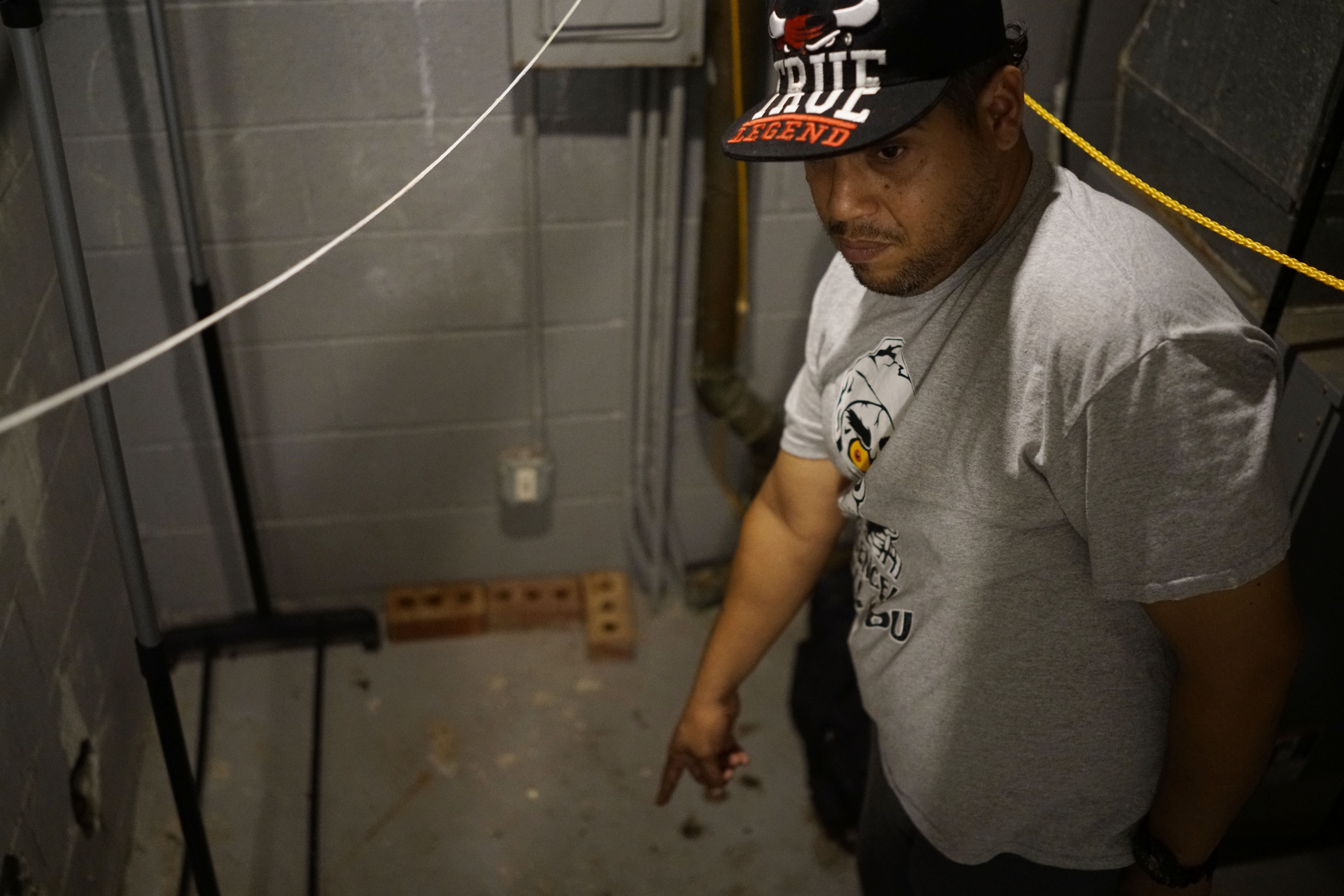 Angel Agosto gestures toward the drain where he had flooding problems in his apartment at the Towne Gardens apartment complex. (Derek Gee/Buffalo News)

When his family first moved in, Agosto said, management told them they would get a new front door the next day because the existing one was in “bad condition,” allowing cold air to seep inside.

“You know when I got my door?” he said. “Two months ago. Every day I went over there and asked them, 'What’s up with the door?'”

Agosto, 40, said a clogged drain in his unit’s utility room where the furnace is located lasted four months despite repeated pleas to management. On Sept. 12, maintenance put a pressure lid over the drain to keep out water, but Agosto wonders how long the repair will last.

“I had water come up from the pipe, dirty water. All that water was coming through the kitchen and in the living room, sewage water,” he said. “They didn’t unplug the pipe...  It’s working so far, but you can still smell” the foul odor.

On one of the walls in Veronica Patton’s Curry Walk apartment is a bulge that looks like a water pocket, and cracks that have gotten progressively worse since management took pictures of the problem in the spring.

Patton, who has lived in her apartment for about 37 years, says the flaws are indications of how the residential complex is “falling apart.”

“They are slumlords,” she said. “We’re tired of fighting, tired of complaining. Nobody was doing anything about it.”

Patton, 66, also attributes the decline to  a “whole new class of people” who have moved in, many who came after natural disasters elsewhere, making it difficult to do background checks on them, she said.

But ultimately, she said, the blame lies with HUD, which has allowed Towne Gardens to get into the condition it’s in.

Looking past troubled past

Smith acknowledges problems with past property managers but said she is looking forward.

Platinum Management has spent at least $200,000 to correct problems identified by HUD and make improvements. It has purchased 30 sets of stoves and refrigerators, repaired 72 broken windows, placed rodent traps outside all 37 buildings and hired a company to check for pests twice a year, Smith said.

Roofs are being repaired, too, after it was discovered that the flashing in every building had to be fixed because the former roofer put the flashing on top of the shingles instead of underneath, which allowed water to come into some of the buildings and collapse roofs.

The management company also is looking into a weatherization program to replace all  the windows, and the sidewalks will be replaced one section at a time, she said.

Because Towne Gardens “scored so low” on the June 5 inspection, inspectors returned Sept. 13 to make sure corrections were made to the health and safety issues and that  “we are doing what we are supposed to be doing,” Smith said. The results of that re-inspection were not yet available.

“It’s been one thing after another,” Smith  added. “But we’re getting there.” 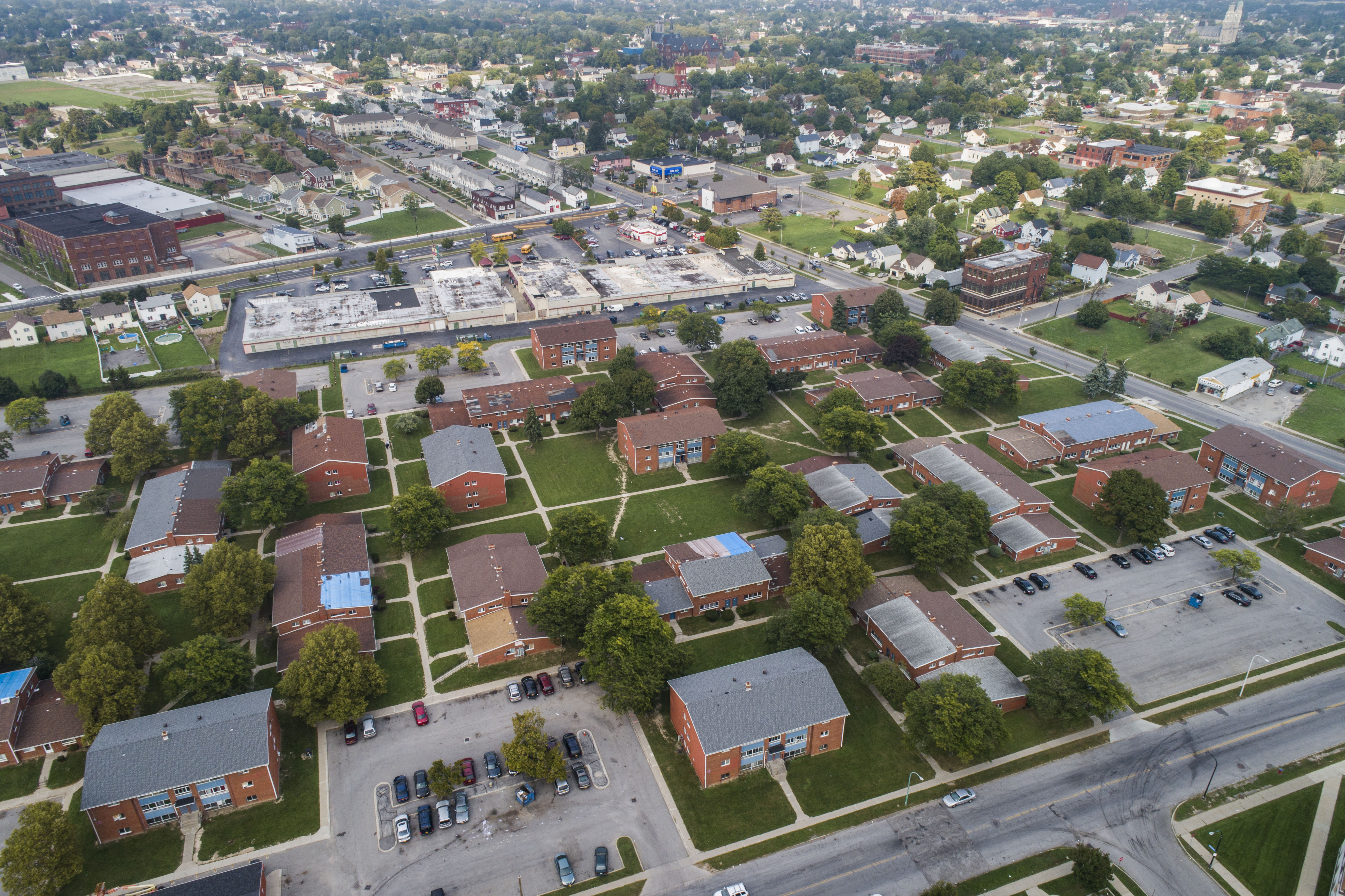 Tenants say living conditions vary depending on what section of the Towne Gardens apartment complex they live in. (Derek Gee/Buffalo News)