Sunday’s Buffalo Bills win over the Minnesota Vikings still seems beautifully unthinkable, one of the great upsets the franchise has managed to put together in its 58-year history. The Bills, after all, were 0-2, swamped in their first two starts, and people were already putting the Vikings and the Super Bowl together in the same sentence.

Still, if you want to look back on what happened exactly 50 years ago this week, George “Butch” Byrd can offer a story that makes for a pretty good comparison.

Byrd, now retired at 77 from a career with Polaroid, played defensive back for the 1968 Bills, who headed into a late September matchup with the unbeaten New York Jets in a situation that looks awfully familiar.

Those Bills, less than two years removed from reaching the American Football League championship game, were 0-3 and struggling mightily. They were 19-point underdogs at kickoff, a gap of almost three full touchdowns, a squad that seemed to have little chance going into that Sunday’s game against the Jets, a gleaming team of destiny led by quarterback Joe Namath.

His legend would be gold-plated at the end of the season, when he guaranteed a Super Bowl victory against the heavily favored Baltimore Colts of the National Football League – and Namath’s team rocked the sporting world by pulling it off, 16-7.

The outcome a few months earlier, before a crowd of just over 38,000 in Buffalo’s old War Memorial Stadium, was a totally different story.

The Bills won only one game that entire year. They beat the Jets, 37-35, in a few hours of utter football madness. “Joe Namath completed seven touchdown passes,” said Dan Darragh, the Bills quarterback at the time. “Four were to his team, and three were to us.”

Indeed, the Bills scored one offensive touchdown, on a 2-yard-run by Ben Gregory. They won the game by turning three of Namath's five interceptions into touchdowns, including back-to-back picks by Byrd and Booker Edgerson in the fourth quarter, interceptions that were only 62 seconds apart. Byrd returned his for a 53-yard score, Edgerson for 45.

Earlier in the game, safety Tom Janik intercepted Namath and took the ball 100 yards, the length of the field, for a touchdown. While Janik died in 2009 from problems with a stomach aneurysm, one of his sisters in Texas, Barbara Lyssy, said his feat against Namath remains a matter of proud family lore.

Lyssy recalls she was pregnant at the time. She jumped up and down with such excitement while watching the play at her grandparents’ house – shouting for her brother to keep on going – that worried family members told her to sit and relax. They feared she would kick herself into early delivery. 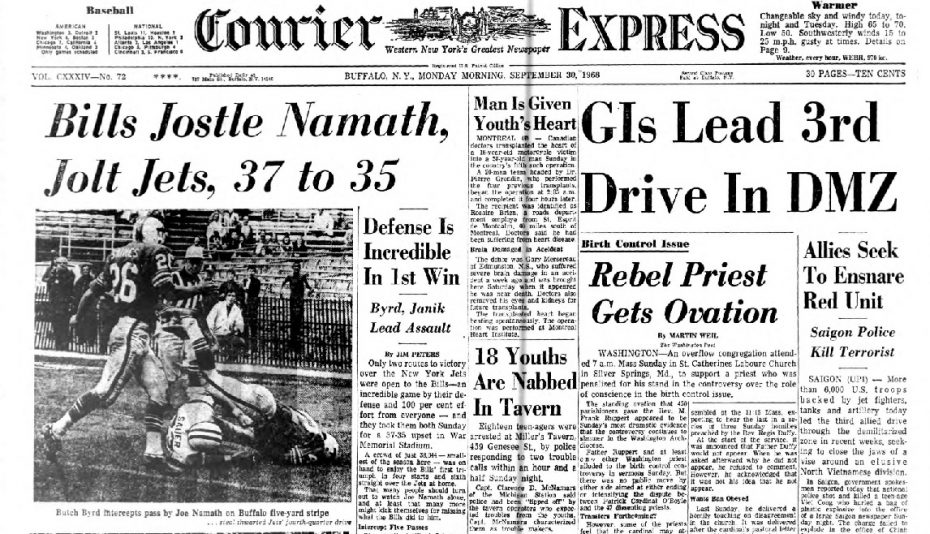 Just this weekend, many younger nieces and nephews were discussing Janik’s feat at a family reunion in Texas, where Lyssy said they tried to bring up a video of the play on their phones.

“Oh, we still talk about it,” Lyssy said.

To appreciate the magnitude of the surprise about the upset, Byrd tells a story about how a man approached him after the game, at the stadium. He does not remember if it was in the locker room or nearby, but he said the man was wearing a suit, told Byrd he was an agent with the FBI, and said he had a few questions.

Byrd said that happened only one other time in his career, after a game in 1966. The man asked how the Bills secondary seemed to have an understanding, beforehand, of where Namath was going to throw the ball.

“How’d you do that?” he asked. Byrd explained. Fifty years later, he said the answer remains the same.

Byrd had two interceptions and a third one – which would have gone for a second touchdown – called back on a penalty. Those pickoffs happened, he said, because he finally figured out how to defend George Sauer, a great Jets receiver. Yet Byrd said the more essential force at work in the game was that Namath was a fierce, relentless competitor.

Once a defender broke up a pass or made an interception, Byrd said, it made Namath angry and he would come right back and try to burn that player. For the most part, Byrd said, defensive backs hated it, because Namath had an all-world arm and fine receivers, and he did not care if everyone in the stadium expected him to throw to the same general spot.

“If you made a good play,” Byrd said, “you knew that it was coming.”

On most days, Namath’s greatness and tremendous accuracy allowed him to win those duels.

That windy afternoon in Buffalo was not one of those days.

The Bills ended up that year 1-12-1. Ed Rutkowski, the versatile-football player-turned-Erie-County-executive who played some quarterback for that 1968 club, said the Bills were a better team than their record indicated – a team that endured a collection of painfully close losses. 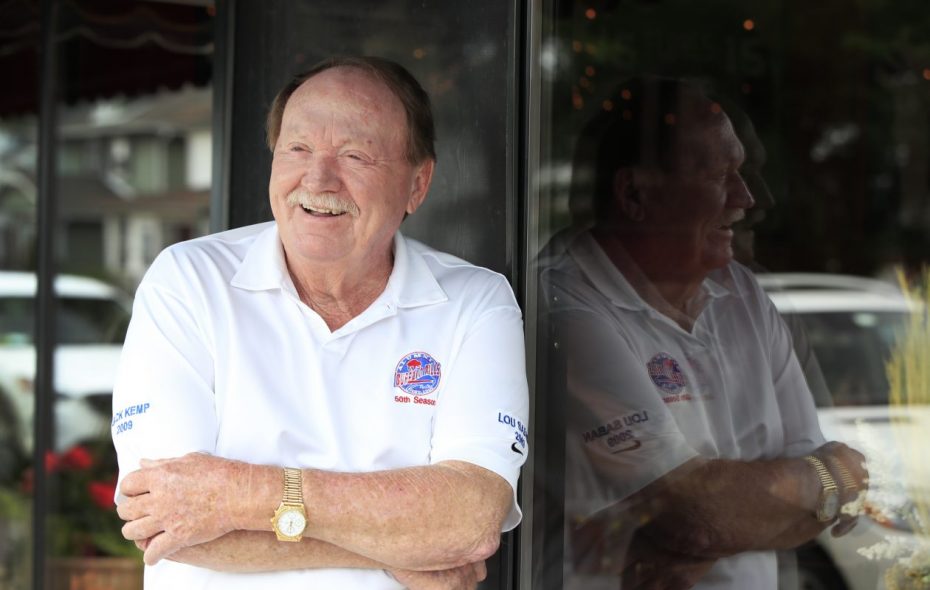 Paul Maguire, a Bills punter and linebacker in the 1960s, built a second career in broadcasting. (Harry Scull Jr./Buffalo News)

“We had a lot of guys who remembered when we played very well in ’64 and ’65 and into ’66,” said Paul Maguire, the Bills linebacker and punter who was there in the great years, put up with some hard years and eventually built a second career in broadcasting. The losses, for those old champions, were especially hard.

Angelo Coniglio, a retired civil engineer and educator who was in the stands for the Jets game and remains a Bills loyalist today, said the biggest parallel between that season and this year, at least going into the Minnesota game, was the sense in both instances of hopeless doom among the fans, before kickoff.

“Things were bad,” Coniglio said of 1968, “and we probably had the same outlook beforehand that things weren’t going anywhere.”

Still, the situations had fundamental differences. While Sean McDermott is secure in his Bills coaching job today, Harvey Johnson was serving as an interim coach in 1968, and owner Ralph Wilson was looking for a long-term replacement. That sense of uncertainty, of a team in flux, was not helped by the absence of its regular quarterback, the late Jack Kemp, who was one of many Bills knocked down by injuries.

While Maguire acknowledges the coincidence of the 50-year gap between two epic Buffalo upsets, he said it is too early to see a lasting corollary. If all goes well for this Buffalo team, if the defense remains as efficient as it has for the last six quarters, then the Minnesota victory will almost certainly not be the solitary triumph of the year.

A single unforgettable win over the course of an entire schedule will always be the way that 1968 season is remembered. When the Jets captured the Super Bowl with their historic victory, providing the upstart AFL with a stamp of football equality, Maguire remembers how everyone around Buffalo took a certain collective pride in knowing the Bills had managed to beat football's new champions.

“We had a good time that afternoon and won the game,” Maguire said, “our only game.” 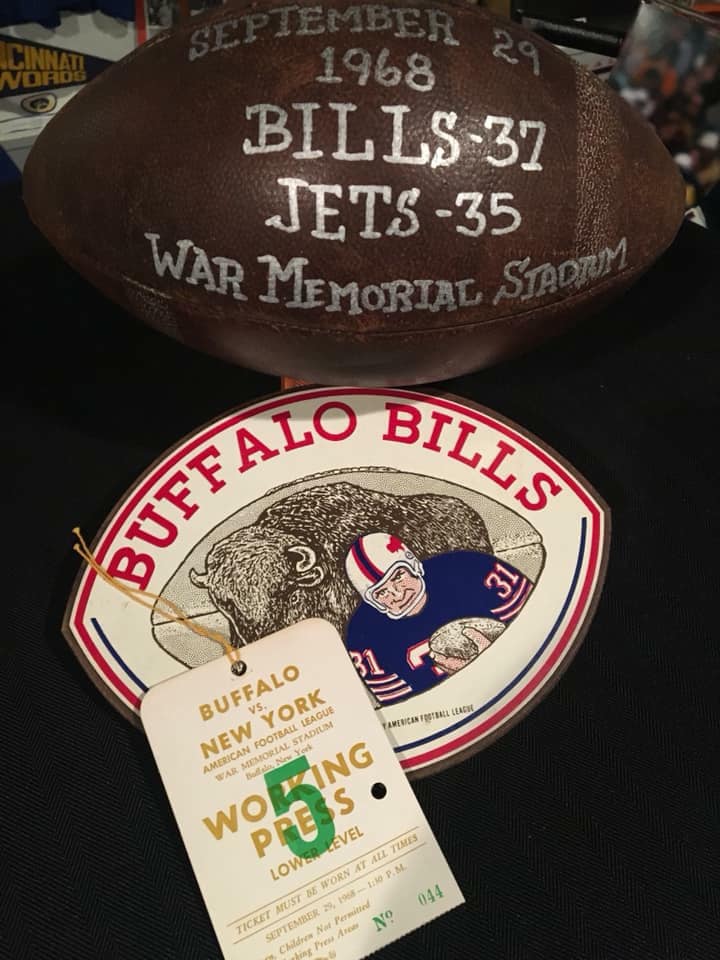 Memorabilia from the Bills-Jets, 1968. (Image courtesy of John Boutet)