It was a direct hit.

Roswell Park Comprehensive Cancer Center won a $6.28 million competitive award from the national Beau Biden Cancer Center Moonshot Initiative, which will include the establishment of a national resource-sharing center to be run by Roswell Park, it was announced Tuesday morning.

The National Cancer Institute's Moonshot Initiative, whose name honors the late son of former Vice President Joe Biden, who died from brain cancer, was launched in 2016 with the aim of expediting cancer research.

The Moonshot's hallmark is an increased pace of progress (it aims to achieve a decade of breakthrough in half the time) through collaboration, data and informatics, particularly via immunotherapy, a treatment which attempts to boost the body's natural defenses against disease or train the immune system to attack certain cancer cells.

"The goal is to find the best immunotherapy treatment for each patient," said Kunle Odunsi, deputy director of Roswell Park. "That requires generating significant amounts of data: the characteristics of the patient’s tumor, the characteristics of the patients’ immune system. And merging this together to come up with the answer to the question of what is best for the individual patients. You can think of it as personalized immunotherapy, which requires big data."

The $6.28 million will fund the creation of a data management and resource-sharing center at Roswell Park, which will be the national hub of the Moonshot Initiative’s Immuno-Oncology Translational Network. The center will provide technical and logistical support and other resources to 13 other IOTN Cancer Moonshot sites. The award covers the cost of creating and maintaining the resource for five years. 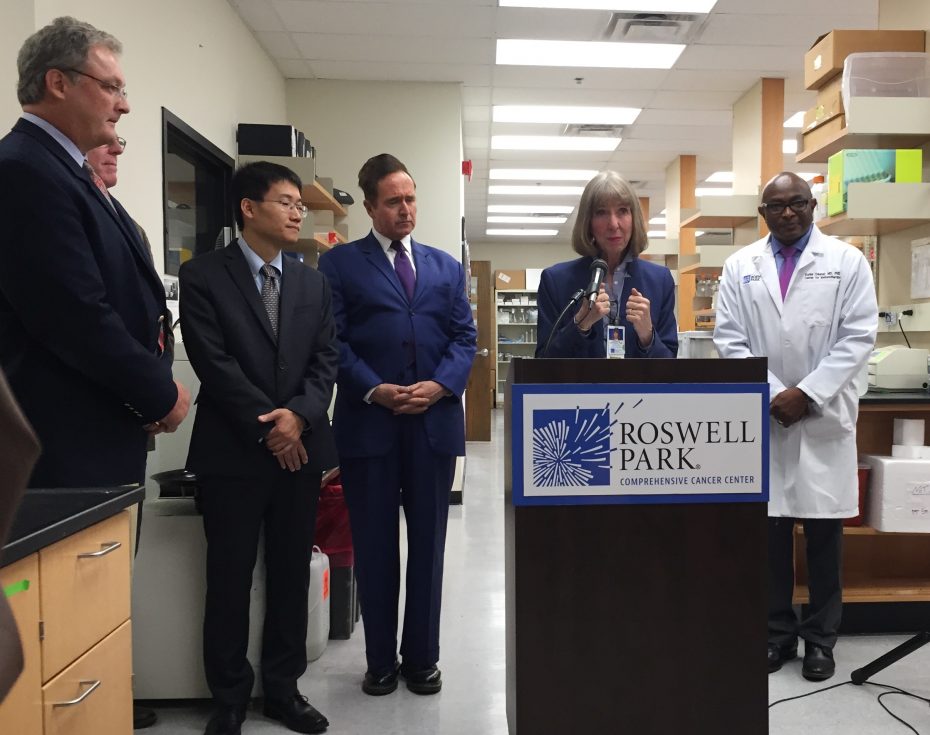 "Cancer science is now a data-driven science, and computational methods are now a fundamental part of cancer research," said Hutson. "Fifty years ago, it was a test tube and a beaker. Now it always includes a computer and a quantitative scientist."

Odunsi and Hutson said a major part of winning this award was Roswell Park's investment in two major cogs of this program: immunotherapy and data science.

"We’re nationally recognized for our work and expertise in immunotherapy over the years," said Odunsi. "Long before immunotherapy began to make headlines, we had as an institution invested in this area."

"This is really a culmination of an investment in data science for Roswell Park," said Hutson, who said Roswell Park would be hiring additional programmers and software developers. "It started as a very small effort with just a few people at Roswell Park, and now we have 80 employees. The idea was to build this expertise so we could compete for these big grants."

Another advantage to earning the award was the resources of the Medical Campus. The University at Buffalo's Center for Computational Research will provide high-performance computing and data storage for the project.

"This is an incredible team effort," said Odunsi. "You can do all of the experiments you want, all the clinical trials you want. Without harnessing the power of big data, we’re not going to see significant progress. Years ago you would just have all your data in a simple Excel spreadsheet, that is no longer the case.

"You’re talking about terabytes … the amount of computational space that we need for this study is humongous. We are fortunate to have UB's Center of Excellence in Bioinformatics next door. The entire Medical Campus is so well poised to help in this national effort. You can imagine that we’re driving this from Buffalo to all around the country."

"Research delayed is therapy denied to somebody in great need," said Rep. Brian Higgins, D-Buffalo. "When the next major discoveries are made in terms of cancer therapy and immunotherapy, they will be made right here at Roswell Park."

This is the second major National Cancer Institute allocation that Roswell Park teams have earned in within a week. On Friday it was announced that Roswell Park and the University of Rochester received $19 million in federal funds to research flavored tobacco.

"This has been an amazing week for us," said Candace Johnson, president and CEO of Roswell Park. "This is really exciting grant. Sometimes the biostatisticians and the bioinformatics folks, they're the unsung heroes because they crunch numbers and they work with all of these big data sets. But without them, people like Kunle and I wouldn't know what's going on, because they really make sense out of all this data."

Hutson said news of the Moonshot award was met with a celebration that saw Liu, Roswell Park's vice chair of biostatistics and bioinformatics, "running around the office, screaming and yelling."

"I’m already working on the next grant as we speak," Hutson said after the announcement. "As soon as we’re done here, I’m going to start typing."