Only a tiny inner circle knew what Connor Fields was going through during his senior season at Albany. His coaches, parents, athletic trainers. Maybe one teammate, but only because his father helped provide Fields with the brace he wore to add stability to his right knee.

Fields, a star attackman for the Great Danes lacrosse team and former Bishop Timon-St. Jude star, played half his senior season on a torn ACL, sprained MCL and injured meniscus. The ACL injury goes back to his junior year at Albany, but wasn't diagnosed until he had his MCL assessed.

Even with that, he led Albany to the best season in program history and finished sixth in the country in points. Four months after his last college game, he was rehabbing his surgically repaired knee at his home in East Amherst with no regrets.

The National Lacrosse League draft will take place at 7 p.m. Tuesday in Philadelphia. Buffalo has the Nos. 3 and 4 picks in the first round. Even as he recovers from surgery, Fields is expected to be drafted toward the end of the first round.

Fields has been in the national spotlight since his high school days.

He was a high school All-American in his junior and senior years, helped Bishop Timon win state titles in 2012 and 2013 and set a New York State record for single-season goals (129) his junior year. Inside Lacrosse ranked him as the No. 15 player in the Class of 2014.

At Albany, Fields was a three-time finalist for the Tewaaraton Award – the Heisman Trophy of lacrosse – graduated second all-time in Division I history in career points (364) and tied for fourth all-time in career goals (199).

Fields wasn't the first superstar to walk the Albany campus, but the Great Danes had not been able to parlay that into team success. Albany entered the 2018 season having never made it to Championship Weekend, the three-day pinnacle of the sport featuring the NCAA Tournament semifinals and final.

“When we would talk during the season, we would all say, ‘Ah, there’s no weight,’ ” Fields said. “But we kind of needed to get over that hump as a program. ... It was tough always hearing about how we keep losing in the quarterfinals every year. I think that was the driving force for us.”

On paper, 2018 was the year to finally break through.

Fields wouldn't have to carry the offensive burden by himself thanks to a supporting cast that included Kyle McClancy, one of the top offensive midfielders in the country, and Tehoka Nanticoke, the No. 1 recruit in the 2018 class, according to Inside Lacrosse. Perhaps more importantly, the roster was Albany's most balanced thanks to T.D. Ierlan, one of the top faceoff specialists in the country, and a defensive unit that included former Orchard Park Quaker Matt Perla.

Albany couldn't have started the season any better. The Great Danes won their first seven games, including impressive victories against Syracuse, Cornell and Maryland, heading into a matchup with UMass Lowell. They moved up to No. 1 in the Inside Lacrosse media poll in the third week of the season and held that position for the next five polls.

But then something ominous happened on a Saturday evening in Massachusetts. Fields beat a bigger River Hawks defender, who in turn went into a sprint to catch him. In doing so, he caught the back of Fields' foot while it was in the air, leading to an awkward plant.

“I felt a little pop,” Fields said. “It wasn’t really that painful. I kind of felt it and then limped off the field.”

He returned for the Great Danes' next contest against Harvard but again left early after hurting his knee.

“Right after each time it gave out, I had to go through the process again,” Fields said. “I had to do a lot of extension, a lot of flexion to make sure I had that full mobility again. Then, just strengthening the quads, the hammy and the glutes.” 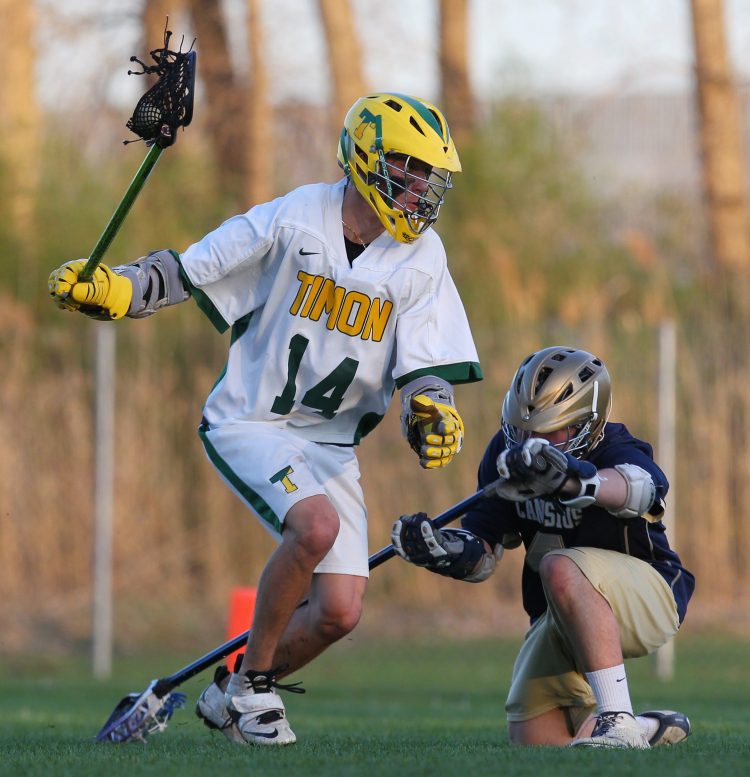 Timon's Connor Fields puts a move on Canisius' Joe Pernick during the first half of the game at Tifft Nature Preserve in 2013. (Mark Mulville/Buffalo News)

The second flare-up spurred Fields to undergo the MRI that revealed the severity of his injury. He found out the results during Easter weekend.

“I was home and I got the call from my trainer and my doctor and they kind of broke the news to me,” Fields said. “I called coach (Scott Marr) and he heard the news, too. We were both kind of bummed talking about it, but then I told him that the doctor gave me the option to play or sit out.”

It didn't take long for Fields to decide he was going to play. His doctor explained the risks of playing, including further injury to the knee. In the same conversation, Fields had made up his mind.

“It was a little risk,” Fields said. “I talked with my parents and they basically said it was up to me. ... I kind of just didn’t want to let the guys down. I wanted to push through it for them. So, it was definitely tough, but I don’t regret my decision.”

Even with the injury, Fields missed only three games all season. But there was one game where he thought he might have to call it quits. It was another matchup against UMass Lowell, this time in the America East semifinal.

"I couldn’t move that well again,” Fields said. "I kind of thought that was the end of my Albany career because I couldn’t move on it. I was really down.”

Albany won the game handily and the subsequent final against Vermont, which Fields sat out for. Things were looking up for Fields, though, as his rehab took a positive turn. The Great Danes earned the No. 2 seed in the NCAA Tournament, the highest seeding in program history, and the swelling on Fields' knee had gone down enough for him to play.

Of course, there was pain, and he wasn't exactly the same player he had been pre-injury.

“I turned into a different kind of dodger,” Fields said. “I went from a change-in-direction dodger to leaning on my guy and trying to make a move from there. Just trying to embrace the contact. I couldn’t really stop and start well at all or change direction at all.

“The biggest thing was the instability. When I was leaning on a guy, I couldn’t put any weight on my right foot. It would all be on my left. Obviously, there’s some big D. So when they’re that big and I’m a smaller guy using half my body, it was definitely tough.”

Even with an ailing knee, Fields notched five goals and 15 points in three tournament games. As a team, the Great Danes doubled up Richmond in the first round and eked out a tight victory against Denver to earn that elusive first trip to Championship Weekend in Foxborough, Mass.

“When he got hurt, it didn't pull us down, but it opened it up the rest of our eyes that we all need to step up,” said Albany midfielder Ron John, who played lacrosse at Lake Shore. “To see that he was that willing to risk a lot of his career just to make us go far and to lead us to the Final Four like he did ... he's an animal, really, he's a beast. It was pretty awesome.”

There was no storybook ending for Albany. Yale's Matt Gaudet scored six goals as the Bulldogs, who went on to win the national championship, rolled to a 20-11 win in the semifinal.

“It was tough at first,” Fields said. “After a loss, you're bummed out. It took a little bit for me to sit back and look back at the year and eventually realize how much of a success it was for us. We were No. 1 in the country. We got a high seed in the tournament. We had a lot going for us. We worked hard this year and it was good to see that hard work pay off, that we got to where we were.”

Marr went on the radio in Albany three days after the Great Danes' season ended and detailed the nature of Fields' injury. The news seemed to spell the start of Fields' rehab process and end hopes of him immediately making the jump to the Major League Lacrosse. The Charlotte Hounds, the team that selected him third overall in the draft, would need to be patient.

But one of his treatments, a cortisone shot in May, got in the way of immediate surgery. Doctors told him they couldn't operate until three months after the shot due to risk of infection.

Fields made his MLL debut on July 30, scoring his first professional goal in Charlotte's 16-10 loss to the Atlanta Blaze. He played three games with the Hounds, exiting his final contest in the third quarter after feeling his knee buckle on a shot attempt.

“For him to play through it, and at such a high level as well, is just a testament of how hard he works,” said Adam DiMillo, a teammate of Fields' at both Bishop Timon and with the Hounds. DiMillo played college lacrosse at Maryland, where he famously scored twice in the 2017 national championship game.

“He never wanted to give up on it. It tells you how much he loves the game. He didn't want to take a step away for a minute,” DiMillo said.

Fields decided to shut it down after the final scare, finishing with four goals and two assists in his rookie year.

“It actually worked out because my doctor said to take a couple weeks off of surgery,” Fields said. “It gave me some time to get that full range of motion back and get some strength in the quad back.”

“They had to do the ACL and they had to clear out my meniscus,” Fields said. “I was kind of nervous going into the surgery because I had a couple buddies who did it and they were telling me about the pain after the surgery. I was a little nervous, but it went really well.”

The first couple days were tough, but he quickly was able to walk and get a break from his house. A month and a half later, he was doing lunges, squats and step-ups, and was close to being cleared to jog.

His college career is over, but his lacrosse career isn't. He'll be back with the Hounds next summer and he's expected to be a first-round pick in the NLL draft Tuesday.

“I want to play indoor this season,” Fields said. “But at the same time, there is a lot of cutting. I want to make sure that I'm ready for that. I obviously had a great doctor who did it and I have a great PT right now, Jeff Woodrich. ... I'm pretty confident that I'll be able to get back sooner rather than later.”

“It's making me work harder, push harder,” Fields said. “Especially with all these exercises, I push through the pain just knowing I want to be back this season.”